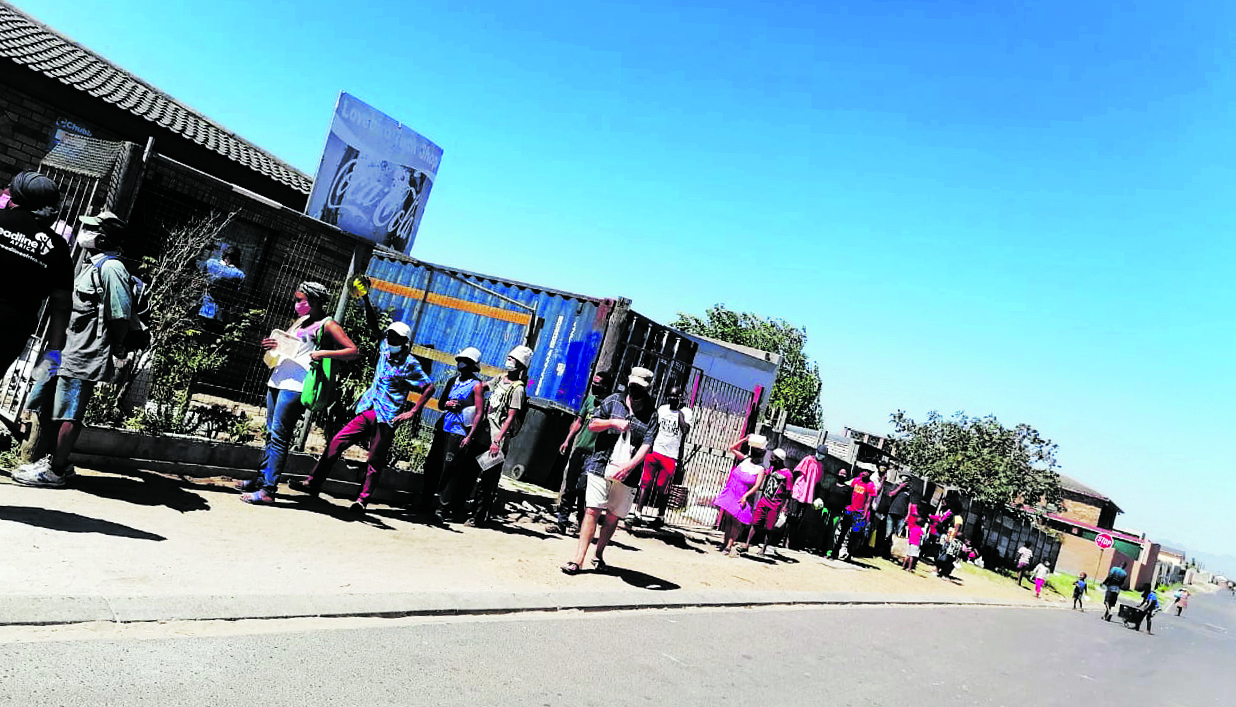 The February 2021 National Income Dynamics Study – Coronavirus Rapid Mobile Survey Wave 3 report shows that in December, one in six households reported that a child had gone hungry. On average, hunger has also now increased: one in five families have reported going hungry.

This story has been updated to include a response by the office of the  Cape Town mayor, Dan Plato to a claim by Farida Ryklief regarding the support her feeding scheme received from the City

March 2021 marks one year since the first Covid-19 cases were reported in South Africa. Since then, during the prolonged lockdown, unemployment has risen and people have gone hungry. With less access to jobs and in turn money, more people have ended up at feeding schemes.

It’s just before 2pm and people start lining up at the Thichers Centre in Delft, Cape Town, for their lunch. It’s a hot day and some people have dropped their food containers in socially distanced lines in the sand and have found refuge in the shade.

Three women call people to stand in line. They sanitise their hands before serving food.

Farida Ryklief, the operator of the centre, told DM168 on 23 March 2020 – days before SA went into hard lockdown – that the centre had started to feed people, mainly senior citizens, two meals per day. The centre has been in the Ryklief family for 20 years; her uncle bought the land as a present for her father’s 50th birthday. Her mother had fed people from the property before she took over when her mother died in 2019.

She pointed out that Covid-19 hadn’t been the problem so much as poverty. “During Covid there’s been a lot of job losses, and subject to that, a lot of people would sell their home appliances, even their clothes”, to buy food. One of the seniors had stayed with her son and his wife, along with the couple’s five children. During the pandemic, the son and his wife lost their jobs. “It’s only the pensioner bringing money into the house – to feed seven to eight people with that pension, it’s humanly impossible, it leads them to sell their goods,” said Ryklief. “They do come for breakfast and lunch, but I do always worry what they have for supper.”

Now there are 600 to 800 people who come for lunch. The majority are seniors. This excludes the 300 to 400 who come for breakfast. Most come from the Delft area, but some come from nearby Belhar.

In a session with a gender-based violence group Ryklief runs, the idea came up to start a food garden. Initially, 45 women were involved. Only nine remain. “The others started gardens in their own homes so now they’re able to sustain themselves,” said Ryklief.

Oxfam reported in 2020 that the Covid-19 pandemic could increase hunger to 40 million people in SA. In a statement, the southern regional director, Nellie Nyangwa, said this was not only a health issue, but a food security one too. “As restrictions on movement within and across borders have slowed food systems and impacted supply chains,” she said, “many have also lost their jobs and this means many more people will go hungry.”

Refiloe Joala, a researcher at the Institute for Poverty, Land and Agrarian Studies (Plaas) at the University of the Western Cape, told DM168 food consumption patterns had changed since the country went into hard lockdown in March 2020.

Employment has slowly started to recover, but “this has not translated into reducing the incidence of hunger among poor and vulnerable people and households”.

The February 2021 National Income Dynamics Study – Coronavirus Rapid Mobile Survey (Nids-Cram) Wave 3 report shows that in December, one in six households reported that a child had gone hungry. On average, hunger has also now increased: one in five families have reported going hungry.

Another feeding scheme has also experienced this. Latifah Jacobs runs one out of her family property in Sunbird Park.

Like Ryklief, her family has fed people for 20 years. Before the lockdown, Jacobs fed people once a week in the nearby Sophiatown informal settlement and in Happy Valley in Brackenfell. Now she feeds 180 adults, up to 220 children and 35 seniors on weekdays.

Jacobs told DM168 she became aware of children whose food was taken by adults in the home, so now children eat at the feeding scheme and she provides another portion for them to take home. She attributes the increase in people coming to feeding schemes to the end of the distress grant and increased unemployment in the community. “Jobs like gardening, bartender, even security guards – those things have really downscaled,” she said.

So what can be done to support feeding schemes and those who run them?

Breadline Africa is a common sponsor, as well as smaller sponsors, but more income is needed.

Ryklief fundraises by selling samoosas every week and she has started an early childhood development centre on the property to help to maintain a steady income stream for the feeding scheme. Jacobs sells custom-made clothing and uses support from her ex-husband to stay afloat.

Ryklief told DM168 she had not received any support from her ward councillor, or from the mayor, Dan Plato, besides the donation of a 30kg bag of rice and a 40kg bag of samp in August 2020.

“On Friday, 12 March 2021 Ms Ryklief requested additional assistance, which was supported, and she  has since been provided with a gas stove, 100L pot, 80L pot and gas canister – this is the kit provided to all qualifying soup kitchens.”

Jacobs had also received limited help. A proportional representation councillor is currently assisting her to lessen her municipal water bill, which is sitting close to R10,000.

Asked about the type of governmental support needed for feeding schemes, Jacobs told DM168: “If they really want to assist soup kitchens, they must start with operational costs.”

She suggested feeding schemes could be run through Expanded Public Works Programmes, in which volunteers receive a stipend for their efforts. Currently she can only afford to give her volunteers a food hamper once a month.

Other suggestions posed by Jacobs include subsidies on water and electricity and subsidies from gas companies for their stoves.

For the first time, Jacobs said, she had run out of gas to cook. “No one thinks of those costs,” she said.

Despite the limited resources, Ryklief said “by the grace of God, we haven’t had to turn people away”. DM168