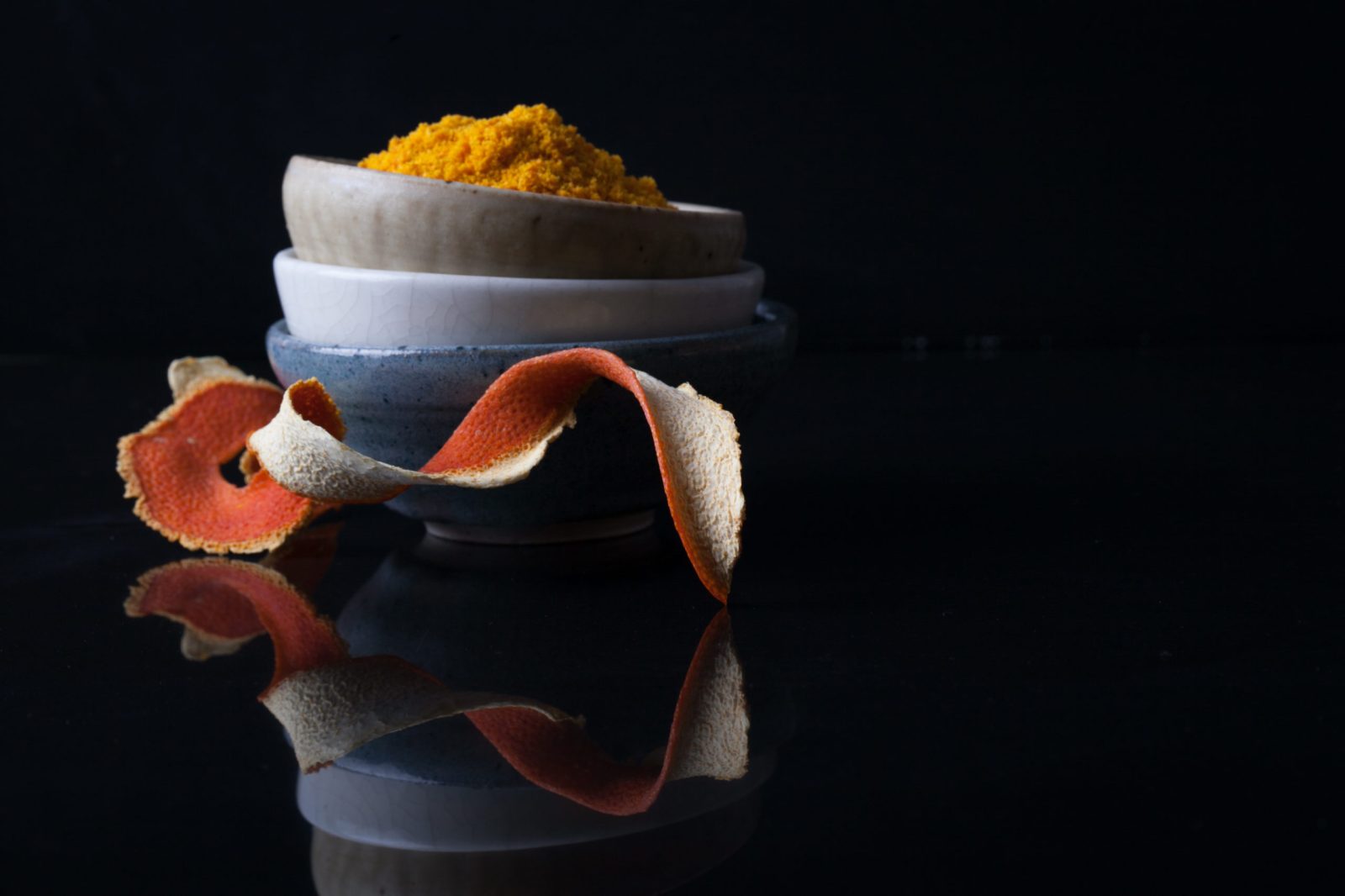 One season ends, another begins; it’s life seemingly in reverse, from the end to the beginning. The very last of the winter’s crop of oranges tempted me to finally make dried peel, an old Cape tradition long lost. And next week, in part 0.2: The Beginning, will be all about the orange blossoms that herald the following season.

Too much citrus zest is thrown away. Rather peel it off, dry it, and store it as a spice.  The zest of these fruits are in a category of their own and can be viewed as a separate ingredient in their own right. I often zest a lemon or orange and put the fruit back in the basket. It does dry out quicker but the juice intensifies too, so you can still use the sap three or four days later.

A biltong dryer turns out to be a most useful thing, and not only for making biltong. You can dry fruit in it, vegetables too, and best of all, you can finally indulge yourself in fulfilling your long-held ambition to make dried naartjie, orange and lemon peel like they used to in the kitchens of the old Cape, when such peels were a popular way to add zest to a savoury or sweet dish. Well, that’s my old ambition at any rate. And I did it the other day.

One thing is important: always zest citrus before juicing it, otherwise juice will squeeze out and be lost as well as dampening all your plans to have that zest as dry as possible.

But a sharp peeler gives you an alternative: to peel away only the peel (no pith) which you can then dry out in a biltong dryer or other suitable drying device (some people use an airfryer) or simply put them on hooks and hang them in a dry spot in a hot shed or garage in summer. You’ll be surprised at how quickly they dry out. Once dry, you can blitz them in a blender or spice/coffee grinder and store them in a jar. Or you can leave them whole, in their curly, folding strips, stored in an airtight jar, and then break off and chop up bits of it as needed. And don’t get carried away, for a little citrus zest truly goes a long way. The entire point of it is that it adds a quick, sharp bit of extra interest to whichever dish it is added to.

Louis Leipoldt wrote of the old tradition of zest (usually naartjie but often orange, sometimes lime, kumquat and even grapefruit) being used “in small pieces, for it is a strong and distinctive flavouring, and nearly always for sweet dishes”. I agree that it is a fine addition to many a cake or dessert, but for me citrus also very much belongs in the savoury department of the culinary arts. Lemon, in any form, is in my top five favourite kitchen ingredients (along with garlic, thyme, coriander and cumin, though not always in the same dish).

Lepoldt adds that in the old days, lemon and orange, as well as citron and kumquat peel or zests “are also used according to taste, and all are pleasingly and warmly aromatic”. But never use it to excess. When making the old traditional dish called melkkos (milk food), he warned to be careful with spices and flavours. “Milk does not tolerate excessive use of them. It requires only the slightest, microscopical whiff and vapour, and one can spoil it with too much cinnamon, too much naartjie peel and especially too much ginger.” Melkkos was (is) “some or other farinaceous food like frummeltjies, dumplings or macaroni boiled in milk and then served in it”. What better than a whiff of citrus peel along with the “cinnamon, mace and perhaps a little allspice” in melkkos.

Leipoldt shares an old recipe for Van der Hum liqueur which he says was given to him by “the Schwabe family” and probably dates to 1836, and is “more or less the same as that of Mrs Cloete”, that being a notable name in the former colony (Alphen estate in Constantia). I’ve long wanted to have a go at making Van der Hum and I might yet do it. If so, surely this old recipe is the way to go:

“Dissolve three pounds of black sugar-stick in six bottles of good Armagnac brandy, and leave to stand for two days. Mix a hundred Ceylon cloves (a hundred!) with half a pound of ground thin cinnamon and the ground dried peels of five naartjies. Add one ground nutmeg and a shred of mace. Pour the brandy over the mixture and stir well; leave to stand in a cool place in the cellar, covered with a wet napkin. Stir well daily. After two months, filter it two or three times through a cloth until it is nicely clear.”

Don’t you love the insouciance with which it is just presumed that we all have a cellar? And black sugar-sticks? Not to mention the wherewithal to buy six bottles of Armagnac.

Leipoldt also recommended naartjieskil to flavour guinea fowl along with nutmeg, He wrote too of a lunch he’d enjoyed on a boer farm. “Quite as ordinary a lunch as I have enjoyed probably hundreds of times on other boer farms. But this one was memorable because the tannie who prepared it was a real culinary artist. Seldom have I enjoyed food that was cooked and prepared as well as that afternoon.” The dessert is apposite here: “The stewed dried peaches were prepared in the traditional way, with a piece of cinnamon, scraping of naartjie peel and a glass of sweet wine.” Always, for Leipoldt, the inevitable glass of wine. And cheers to that. With a strip of naartjieskil in it.

This column is best garnished with this recipe.

What to do with dried citrus peel and zest

To make citrus zest, just peel it off carefully, skewer hooks through one end, and hang the pieces to dry in a biltong make or other warm spot. They can also be dried in a very low oven for about an hour. Once dry, you can use it in a number of ways…

Grind it in a blender with cumin, fennel and caraway seeds for a spicy rub for pork, chicken, lamb or beef.

Stir it into a gremolata (traditionally minced garlic, parsley and lemon zest) instead of the fresh lemon zest.

Add it to rice or pap to give your pap a bit of pep.

Make lemon pepper (or orange or naartjie pepper) by mashing together equal parts of dried zest and ground black pepper.

Add it to a mayonnaise or béchamel sauce.

Sprinkle it over a salad or on fish as a garnish. Along with something green it will give your fish dish a lovely pop of colour.

Add some to a baked dessert such as malva pudding or lemon (or orange or naartjie) meringue pie.

Sprinkle some over vegetables before roasting them.

Use a slice of dried peel to make orange, lemon or naartjie tea. DM/TGIFood

Tony Jackman’s book, foodSTUFF, is available in the DM Shop. Buy it here.