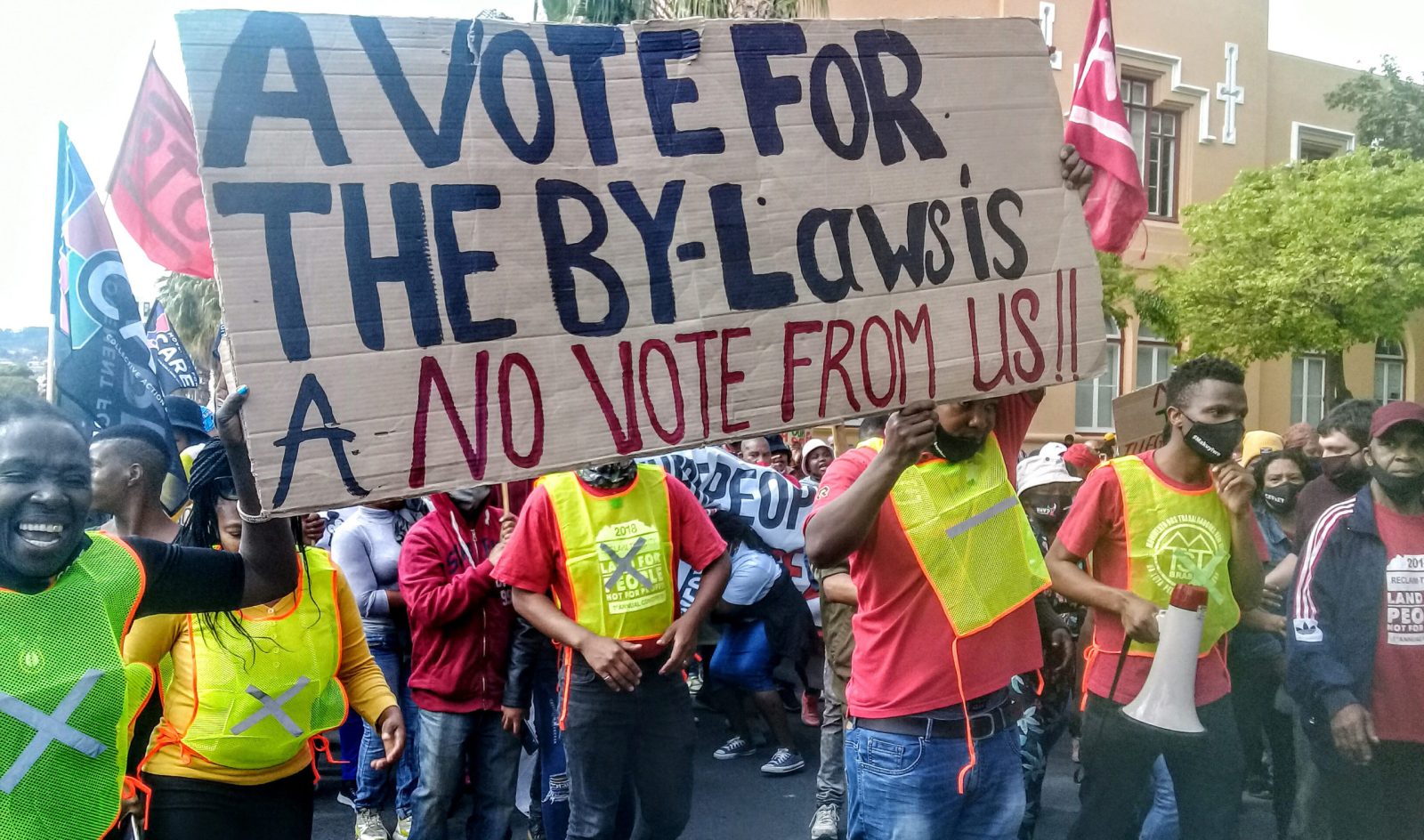 The demonstration followed a raid of the Woodstock Hospital occupation by SAPS members earlier in the day.

There was chaos in Hanover Street, Cape Town, on Friday when police used stun grenades to disperse a crowd of about 80 protesters. They were marching against the City’s new Unlawful Occupation by-law and the amended Streets, Public Places and Prevention of Noise Nuisances by-law.

The protesters scattered and it is unclear if anyone was arrested. Marchers included members of Reclaim the City, Singabalapha, Housing Assembly, Movement for Care, Rehoming Collective, and Ndifuna Ukwazi.

The march followed a raid earlier on Friday of the old Woodstock Hospital, which has been occupied for several years by a few hundred people. The residents call the place Cissie Gool House.

Carin Hendricks of housing activist movement Reclaim the City explained that about 300 police and other officers stormed the building at about 6am. The raid lasted for two hours. “They said they were coming to raid the occupation for drugs, guns and all kinds of things but they gave no specific reason to raid.”

Hendricks told GroundUp that authorities did not produce any court order permitting the raid. GroundUp has not yet been able to verify whether the raid was approved by a court.

“We are living in a city that is anti-poor,” said Hendricks. “They don’t see us as a community or recognise us or those living on the streets as being citizens.”

On 29 September, we reported on the protest by civil society and advocacy groups who are opposed to the new by-laws passed by Council. They believe the Unlawful Occupations by-law will criminalise people in need of housing and those living in shacks.

The Streets, Public Places and Prevention of Noise Nuisances by-law provides for compliance notices to be issued to people sleeping in public places. It states that they must be offered alternative shelter, and that they are committing an offence if a reasonable offer for shelter is refused.

In a joint statement, the activists said, “These by-laws have been approved against the backdrop of extreme need. The City currently sits on a housing backlog of almost 370,000 families. The lack of political will to address generations of dispossession, coupled with the systemic failure of all-levels of government to deliver on the promise of a functioning government-subsidised housing programme have all contributed to this housing crisis.

“The Democratic Alliance-led City Council cannot continue to prioritise the policing of people who are without land over delivering safe and affordable housing for poor and working-class families,” the statement read.

Bernadette Rossouw of the Housing Assembly said she had been evicted seven times by law enforcement officials from spaces she and her family occupied. She currently lives on a piece of undeveloped land next to Ocean View with 20 other families.

“One time I was evicted brutally. My daughter, who is a minor, was held down and we were pepper-sprayed. There is no accountability. The City is doing what they want without any accountability. Then when we stand for our rights, they shoot at us. What are we supposed to do? Stay backyard dwellers for the rest of our lives?” asked Rossouw.

Rossouw, who is a single mother of four, said she has been living without access to water and sanitation for the past two years. GroundUp previously reported on the community where Rossouw lives.

According to Rossouw, the situation has still not changed. “We’re fighting each other for Sassa grants and EPWP contracts. What is that? We deserve more.”

Hendricks said they planned on handing over their memorandum to the DA’s Cape Town mayoral candidate Geordin Hill-Lewis. But when they arrived at the offices in Greenmarket Square, protesters were told that members were working remotely.

GroundUp asked the City for comment, but we were told the matter needs to be directed to the SAPS.

SAPS did not respond to our request for comment by the time of publication. DM