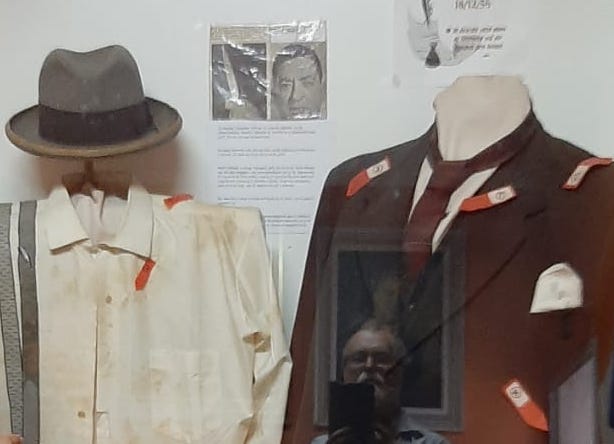 The Greek Orthodox Church in Maputo has commemorated the life and memory of Dimitri Tsafendas, with a service that coincided with the 200th anniversary of the Greek Revolution.

When communist Dimitri Tsafendas stabbed Prime Minister Hendrik Verwoerd in the South African Houses of Parliament in 1966, the stunned apartheid government had to find a way to deflect the deeply political nature of the assassination.

The Mozambique-born Tsafendas was mad. Tormented by a tapeworm. A “half caste”. And he was Greek. Not one of us.

In 2018, scholar and author Harris Dousemetzis published the first in-depth biography of the man who killed Verwoerd, The Man Who Killed Apartheid. The almost 500-page tome provides ample evidence of Tsafendas’s consistent activism in several countries during his peripatetic life.

On 10 October, the Greek Orthodox Church in Maputo commemorated the life and memory of Tsafendas with a service that coincided with the 200th anniversary of the Greek Revolution.

The tribute took place in Tsafendas’s birthplace, Maputo, and was attended by members of the Mozambique government, the diplomatic corps and representatives from other religions and churches.

A memorial service was held by His Grace Ioannis, Archbishop of Zambia and Deputy of the Orthodox Diocese of Mozambique.

The 200th anniversary of the Greek Revolution was celebrated on 9 October at the premises of the Orthodox Diocese of Mozambique.

A message from His Beatitude the Pope and Patriarch of Alexandria and All Africa Theodoros II, was read out, describing Tsafendas as “a real fighter for human rights, a missionary of freedom and a true martyr who experienced during the most part of his life unspeakable tortures”.

The Archbishop of Zambia said that Tsafendas had loved his “motherland” Mozambique and was one of the “pioneers of the Mozambican national liberation movement and was repeatedly imprisoned by the Secret Services”.

In a message from secretary-general of the South African Communist Party (SACP), Solly Mapaila, Tsafendas was hailed as “a people’s hero of our liberation struggle. We will never forget his enduring legacy and huge sacrifices for our freedom.”

“Many beautiful souls and revolutionaries remain unsung and not recognised, this is so of comrade Tsafendas,” said Mapaila.

The SACP, he added, had recognised his “revolutionary contributions and fully accepted and agree with the massive research findings by author and sociopolitical activist and academic, Harris Dousemetzis, on the true revolutionary role, contributions, socialist, anti-racist, anti-colonial and egalitarian identity of Tsafendas”.

The SACP had committed to “erect a proper tombstone and a memorial for him; this process was disrupted in 2020 by the Covid-19 pandemic”.

Ronnie Kasrils, former minister and veteran of the African National Congress, Zak Yacoob, former Constitutional Court judge, Krish Govender, former co-chair of the South African Lawyers Association, and Alexandre Moumbaris, arrested in 1972 (and who escaped in 1979) and who was imprisoned in the same cell as Tsafendas, also all sent messages.

Kasrils said the tragedy of Tsafendas’s life “was that his act for freedom was not acknowledged by the liberation movement, even unto this day, and that the falsehood that he was insane created by the apartheid regime was never contested”.

Moumbaris said he had met Tsafendas in 1972 when he was brought to the maximum-security prison “nicknamed” Beverly Hills.

“That was where the executions by hanging took place, on Tuesdays and Thursdays, if I remember right. The evening before the prisoners on death row sang the whole night long to encourage those to be executed in the morning.”

Tsafendas was housed in a cell in a small section of the wing for white prisoners, which included two other cells, a bathroom, a chapel and a small, square exercise yard.

“Right from the beginning I had no doubts about his sanity. He spoke English, Greek, some Arabic. He went to a Greek school, in Attarine in Alexandria, where I was born,” said Moumbaris.

He had spent several months with Tsafendas and viewed him as “the bravest man I have met. He was a tyrannicide (Τυραννοκτόνος). Glory to his name. I regret that he finished his life in a hospital that looked so much like a prison and only a stone to mark his grave.”

Govender said the “martyrdom of Dimitri Tsafendas is seemingly forgotten by the people of South Africa. This is so as South Africa is grappling with more strife and failures after political liberation in 1994.”

Tsafendas would, opined Govender, be saddened were he “alive to see that South Africa is a country: with the highest levels of economic inequality in the world; grappling with high levels of corruption in government and the private sector; that is ranked among the very high polluters of the atmosphere in the world; unable to curb racism, gender violence, money laundering, human trafficking, housing crises, poor sanitation, dropping in educational standards, and many more ills, too numerous to mention.”

He said it was “quite difficult” for South Africans to even remember Tsafendas “with our sometimes incorrect recording of history”.

“The millions of people in South Africa need to be reminded that Dimitri Tsafendas, in his formative years, fought alongside the oppressed dock workers in Lisbon during the fascist rule of the Salazar regime, and was arrested, detained and tortured by the secret police, PIDE.”

After outsmarting his captors, Tsafendas had managed to get to Africa, making his way to Mozambique and finally to South Africa “while supporting the struggles of the working class all along the way”.

It was hoped that “one day South Africa will find the heart to properly remember and commemorate the life of this unique and courageous martyr”.

Govender thanked Dousemetzis for his 10 years of research, during which he found that Tsafendas had been a deeply political man, the son of an anarchist and a communist through and through.

There was no way, however, that apartheid government securocrats were going to admit to the shattered white minority that there had been a massive systems failure, and that in spite of massive surveillance and repression, their beloved Dr Verwoerd had been felled.

A known communist who had previously been denied a visa to South African, Trafendas had managed to enter the country, and not only that, he got a job as a parliamentary messenger.

So confident was the security apparatus of the steel traps they had set for any “undesirables” that to admit that the unthinkable had happened would have been catastrophic.

There is a photograph of Tsafendas on display in one glass museum case in South Africa. Most of the time, however, it is locked away along with the bloodied suit that Verwoerd wore on the day Tsafendas killed him

In Betsie Verwoerd’s house in the Afrikaner homeland of Orania, a photograph of a young Dimitri Tsafendas in a newspaper cutting of the assassination, pinned to the backing board of a glass display case, looks out from over the shoulder of Verwoerd’s suit. DM