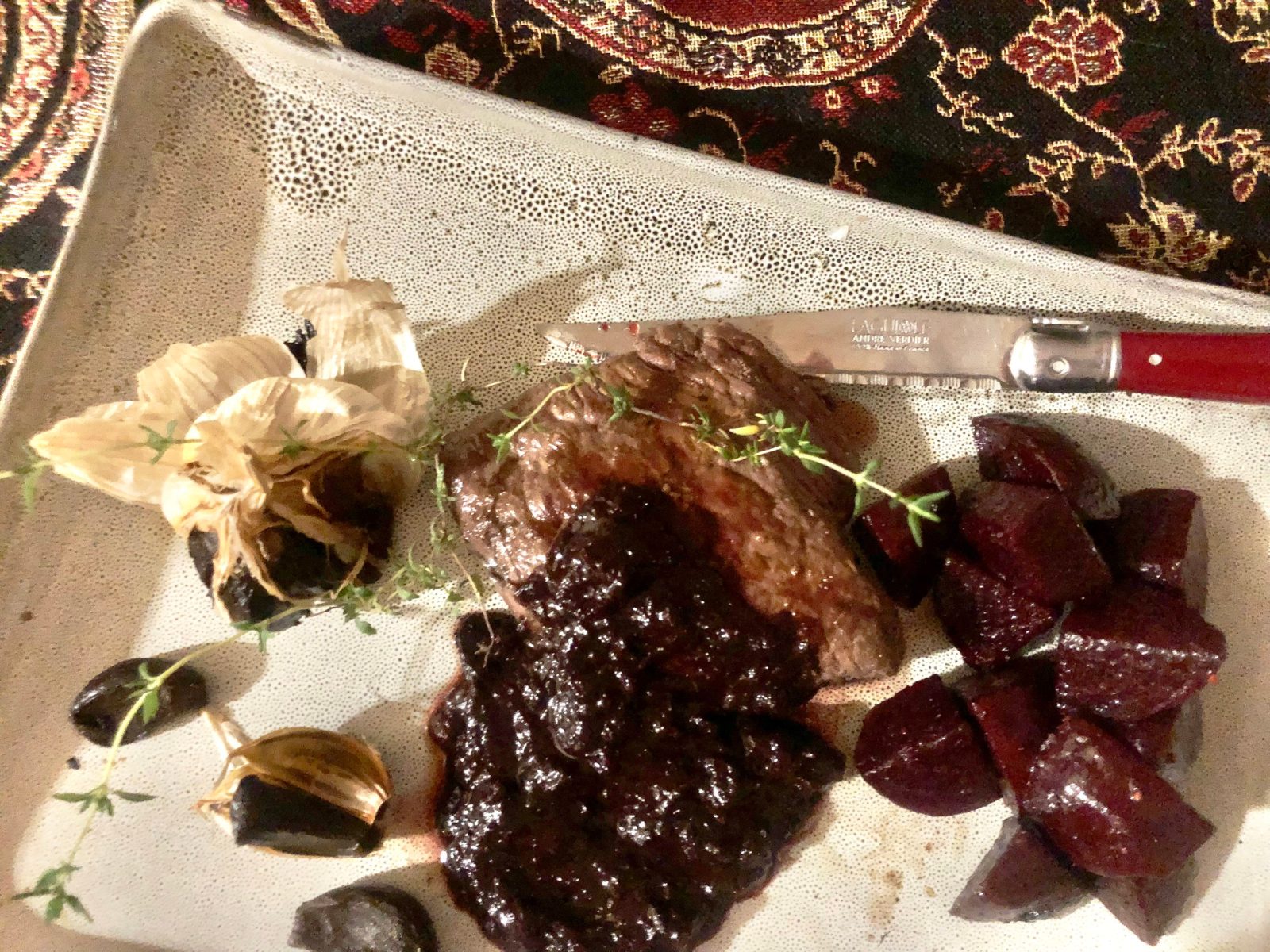 A rare trip to the big city meant a chance to buy an ingredient you never see in my small-town shops: black garlic. A recipe soon developed.

Black garlic is white garlic that is aged and altered by the application of low heat for several weeks which causes the Maillard reaction to turn it obsidian, the deepest shade of brown, although it is called black.

The process is applied to whole bulbs and that’s how you buy it. The cloves soften and if you squeeze them gently you’d swear they were off. Peel away the husks, which have turned from the expected white to a nutty tan hue, and you find perfect little soft black cloves where crunchy white ones used to be. They’re delicious and can be eaten just like that.

It’s old hat in Asian cuisines but now it’s a favoured trendy ingredient in restaurants all over. Though they are often described as being raw, it would be more accurate to say they’re parcooked, given that heat is applied for some time, even if it is very low, and that the application of that low heat alters them.

They remind me of tamarind, both in colour and taste, even in texture. Like tamarind, they’re easy to mush which means you can whisk them into a sauce readily. It’s slightly sweet with a hint of sour and might remind you of soy.

Thinking about what would go with it, and having been eying that ostrich steak, my mind sped to red wine. That afternoon, a parcel arrived at the front gate: an elegant cask containing a bottle of very special limited edition wine, numbered, to celebrate the 80th anniversary of Perdeberg in Paarl. Serendipity follows me around, as I’ve often said, so a black garlic and very special red wine sauce it would be. I know… I did pause for thought, because who would cook with wine that costs R600 a bottle (I didn’t pay for it, who can afford that?). Well, I used a little of it… I had told them I would write a special recipe to go with it. And to drink it with. Most of it.

The wine is called Rex Equus (King of the Horses) and is a Bordeaux blend led by Malbec (38%), with 35% Cabernet Sauvignon, softened by 17% of my favourite Merlot and 10% Petit Verdot. Despite the heavyweight pair up front it is lusciously easy to drink, not at all tanic.

I would love to have kept it as it’s ripe for the ageing, but I’m a cook who writes, or a writer who cooks, so it had to be opened. I savoured it slowly, relishing every moment and nuance, to do justice to its elegance and provenance.

Cellarmaster Albertus Louw had decided to make a wine that would be “top quality and (have) ageing potential, and imagined the best wine we could make”. It’s darkly spicy with scrumptious hints of black cherry and berries and will surely bless the palates of those who would like to put it down for a few years. If you’d like to have a go at acquiring some (but not number 1,847 of the 1,941 that were bottled; that one was mine), follow this link. Good luck, as there’s a demand for it.

I used star anise and juniper in my black garlic and red wine sauce, in a nod to the spiciness of the wine. The black garlic brought the fruitiness. Oh and thyme, because all good wine needs… sorry.

Add the cloves of one black garlic bulb and reduce for a few minutes more. Reserve the remaining black garlic cloves (from the second head of black garlic). Season with the funky salt and black pepper to taste. Taste and adjust seasoning if needed. Fish out the star anise and juniper berries. Blitz it with a handheld blender or similar. Reserve.

Melt the clarified butter in a skillet. Fry the steaks until medium rare or your preference. Keep them warm.

Heat the skillet and pour in the sauce. Cook briefly on a moderately high heat while scraping the bottom. If you’d prefer a fine sauce, strain it into a bowl, then return the strained sauce to the saucepan you cooked it in and heat through. (I chose not t0 strain mine, as I wanted a coarser texture.)

Plate the steaks with the sauce, with the remaining black garlic cloves as edible garnish. Eat it with a fine red wine. DM/TGIFood