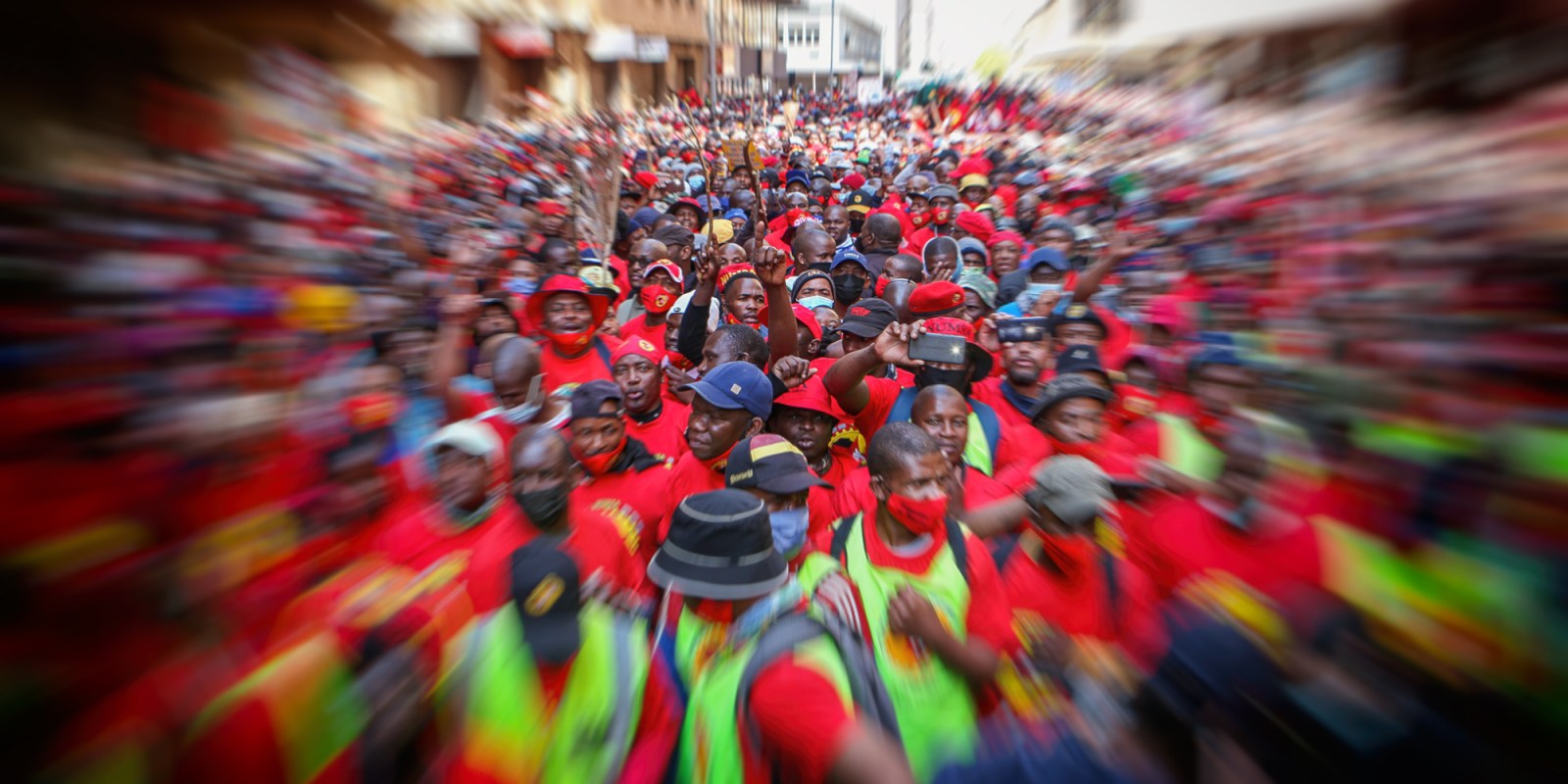 Seifsa has confirmed that an improved wage increase for workers in 2021 has been presented to Numsa officials. (Photo: Gallo Images / Sharon Seretlo)

A senior official close to negotiations told Business Maverick that steel industry employers have sweetened their offer of a salary increase to workers by nearly two percentage points, from 4.4% to 6%.

Employers in the steel and engineering industry have upped their salary increase offer to striking workers affiliated to the National Union of Metalworkers of SA (Numsa) in the hope of ending a damaging strike that’s entering its second week.

The Steel and Engineering Industries Federation of Southern Africa (Seifsa), the sector’s largest employer body that represents 18 organisations employing 170,000 workers, has confirmed to Business Maverick that an improved wage increase for workers in 2021 has been presented to Numsa officials.

The terms and conditions of the offer have not been made public.

“We have given an undertaking that the revised offer that we have shared with Numsa will not be made public until Numsa responds to the offer. But it is a significant improvement from what was tabled in the original offer,” said Lucio Trentini, CEO of Seifsa.

Seifsa had hoped to secure a meeting with Numsa officials on Monday evening to discuss the improved offer.

Business Maverick was informed by a senior official close to the negotiations that employers have sweetened their offer by nearly two percentage points in 2021, from 4.4% to 6%, which will also be offered to the lowest-earning workers in the industry. This latest offer has pitched salary increases of between 5% to 6% — depending on the employment and skills level of workers.

Numsa confirmed that an improved offer had been tabled. “Numsa members are deliberating on an offer proposed by Siefsa. It is an improvement on the 4.4% offered by employers. We are waiting on members to give feedback about how they feel about the offer. If they accept it, the strike will be over. If they reject it, the strike continues,” said Numsa national spokesperson, Phakamile Hlubi-Majola.

A continuation of the strike beyond Tuesday 12 October will be devastating for the economy. Seifsa’s Trentini estimates that the industrial action has already cost workers about R100-million in lost wages. This is because employers in the steel and engineering industry have imposed a “no work, no pay” policy for striking workers affiliated with Numsa. Trentini said between “30% and 40%” of Numsa-affiliated workers are on strike.

“The average pay per hour for Numsa members is around R55. Workers have lost R2,100-odd in wages over the last five days of the strike. The industry has lost in excess of R100-million in wages thus far,” said Trentini.

He is worried about the broader impact of the strike on the economy, as shop floors at many steel factories across the country have been abandoned by striking workers, affecting productivity in the process. Workers who didn’t join the strike have, in some cases, been intimidated by strikers to down tools.

The steel and engineering industry is important for South Africa’s economy as it represents nearly 2% of economic output and is responsible for 190,000 direct jobs. Its supply chain is long — steel is used in skyscrapers and bridges, cars and cruise ships, guns and washing machines.

“We are losing wages and production activity in the industry as the strike continues. If you take this money out of the economy, it creates a big dent. It is a toxic cocktail where everyone loses. All of those feed into an economy that is struggling to climb out of the doldrums,” said Trentini. DM/BM