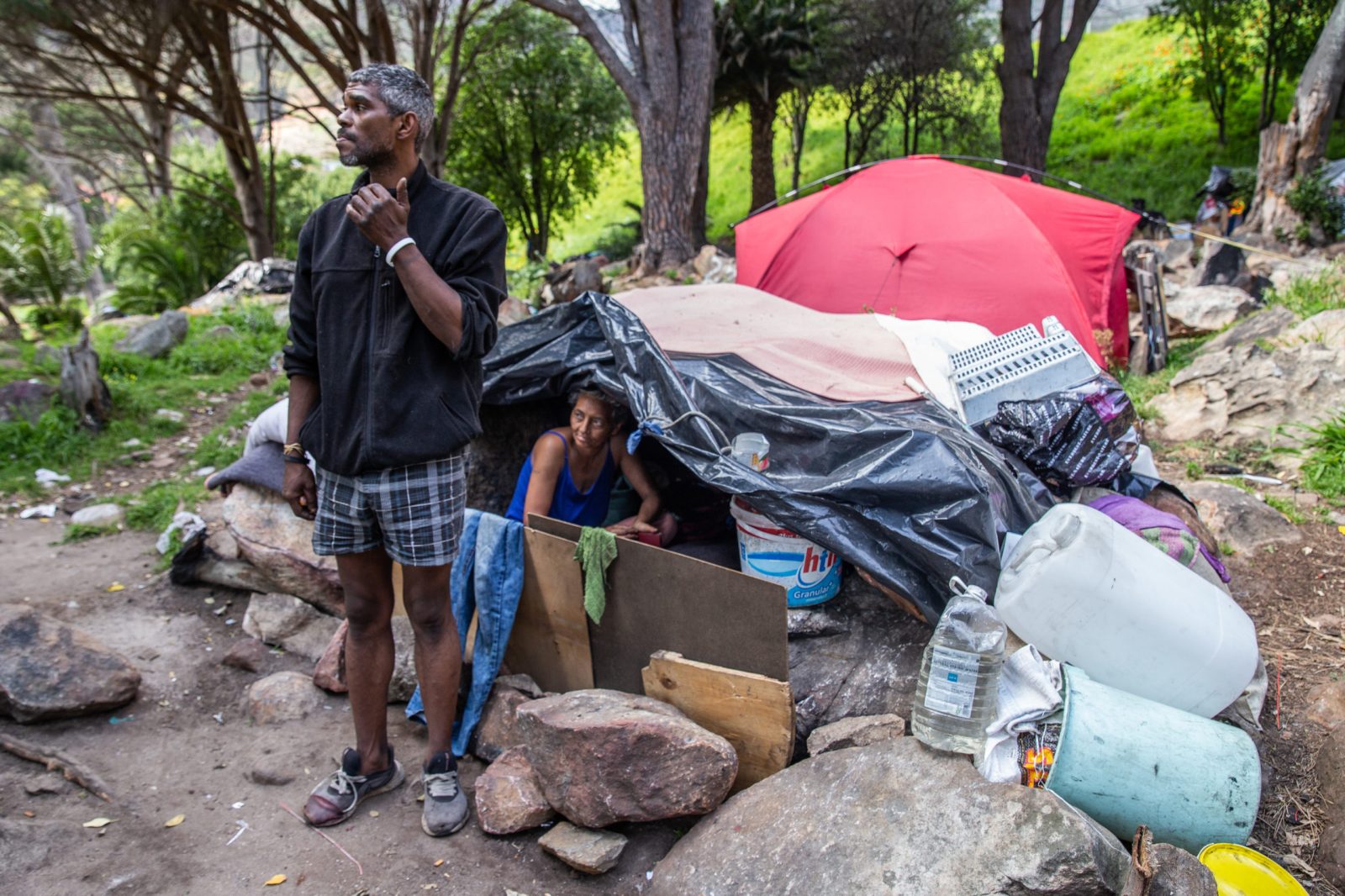 Gavin Abrahams and his partner were among homeless people whose tents were confiscated in Van Riebeeck Park by law enforcement officers. They have since slept under whatever they can find. (Photo: Ashraf Hendricks)

The confiscation of homeless people’s tents near Cape Town’s city centre is a common occurrence. The City also appears to be taking a much harder stance on homelessness.

In a recent incident, on 22 September, law enforcement officers confiscated more than ten tents from a group of people who live in Van Riebeeck Park. Among them was Ziggy Goredema, an immigrant who designs and creates unique lampshades with recycling material to make ends meet.

Most people living in the park say they have been there for about three months but others have lived there intermittently for 15 years.

Goredema said he had saved up to buy the two-person tent that he shared with his partner Kashiefah Sedicello earlier this year for R650. He said on the morning of the raid, law enforcement officers arrived without warning and instructed them to remove their belongings from the tents. “They took it and left. They gave us a note to tell us where we must fetch our tents,” he said. The tents were taken to a storage depot in Ndabani.

Goredema and Sedicello say they spent the week sleeping under a plastic sheet and tarpaulin they found nearby.

“We ended up losing other stuff in the process as well,” Goredama said. “Taking a tent in this cold weather near the river, for the sake of making someone happy who lives inside a house and complaining about the devaluation of their property, is completely heartless. You cannot let 200 people suffer to make three people happy. I disagree with that logic.”

Sedicello and Goredema say they plan to move again, after moving there from a space near De Waal Park where they had also been “harassed so much by law enforcement”.

Sedicello said earlier this year law enforcement officials confiscated her ID book and her bag while she was selling flowers in Chapel street. Without any identification, she says she has not been able to get vaccinated against Covid-19.

Gavin Abrahams said he was on his way to an interview in town, but turned back when he saw law enforcement vehicles driving towards Van Riebeeck Park. He had already lost his tent and other belongings in a fire earlier in September. “I couldn’t lose it again and start over from scratch.” In addition to their tent, Abrahams said their canned foods, baked beans, beef, meatballs, rice, sugar and instant porridge were confiscated as well.

Asked about the incident, law enforcement spokesperson Wayne Dyason denied that anyone’s personal belongings had been confiscated. “The City’s Social Development department offers to relocate people to one of the City’s Safe Spaces, or any night shelter. All people found on site are given this offer,” he said.

Mayco Member for Community Services and Health, Zahid Badroodien said that the City goes “above and beyond” its mandate to provide assistance to people living on the streets. He said the City also offers development programmes to people living on the street that helps them reunite with families, reintegrate into society, and get short-term work through the Expanded Public Works Programme.

Badroodien said that homelessness is the responsibility of the national and provincial governments “who jointly hold the constitutional mandate and budgets for welfare services” including funding shelters.

But he also said: “The shelter system offers a sustainable pathway off the streets. There are sufficient shelter spaces in Cape Town to progressively get all willing homeless persons off the streets sustainably … there are a significant number of vacant bed spaces in shelters, and the City offers these daily to any person willing to accept.”

“The City has an obligation to make sure that our public open spaces and city remain sustainable, that there is equality before the law, and that while we are offering assistance to help people off the streets, our by-laws are being applied equally to all residents at the same time,” said Plato.

Also on Wednesday the City passed an amended by-law that provides for compliance notices to be issued to people sleeping in public places. The by-law states that they must be offered alternative shelter, and that they are committing an offence if a reasonable offer for shelter is refused. Activists have condemned the amendments. DM