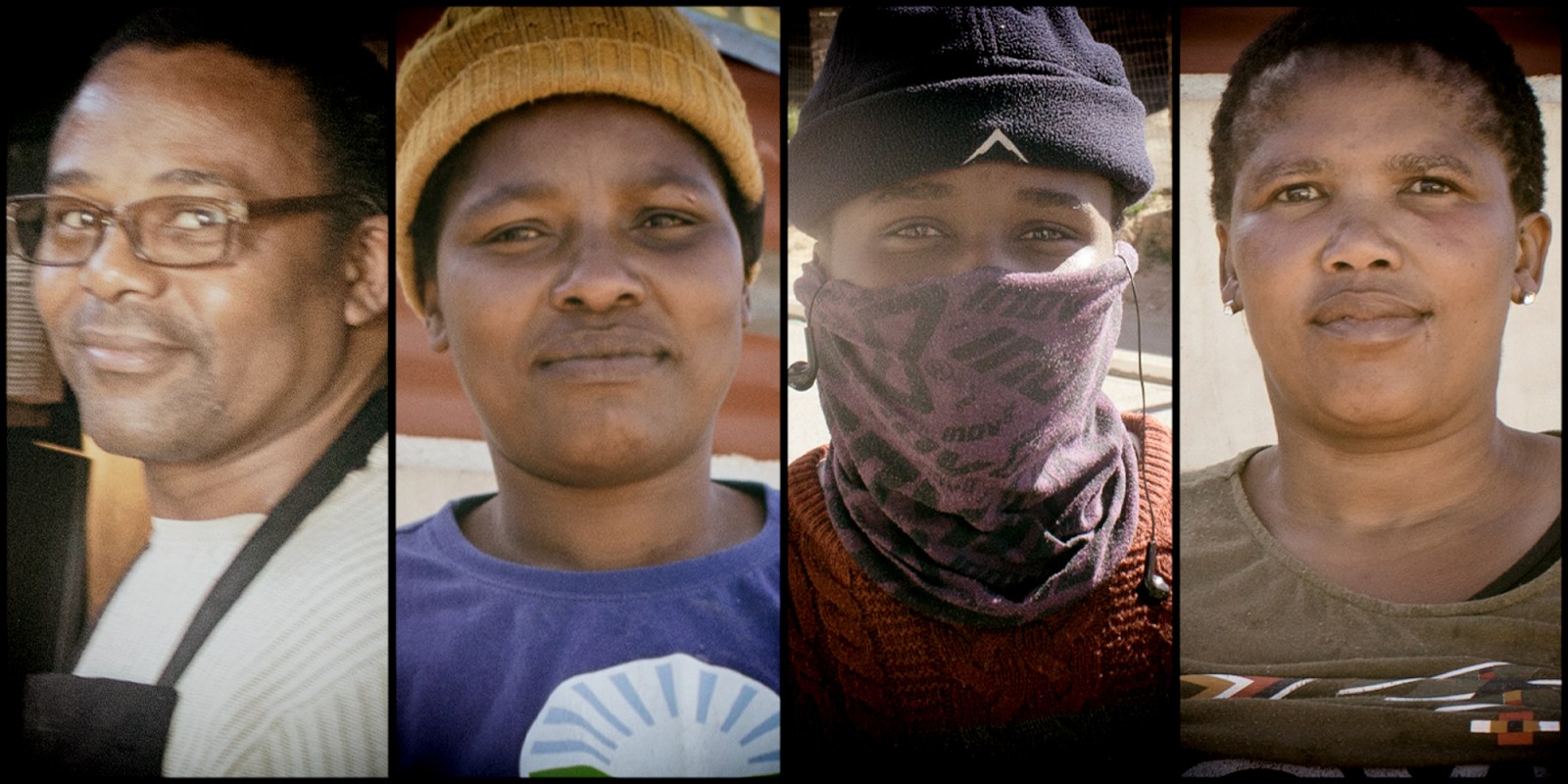 Stellenbosch Municipality is one of only 27 municipalities that had a clean audit in the 2019-2020 Auditor-General report. On the ground, seeds of good local governance are felt incongruently. With less than five weeks to the local government elections, we explored three wards in Stellenbosch as part of a series seeking to understand the people and politics behind the upcoming polls. 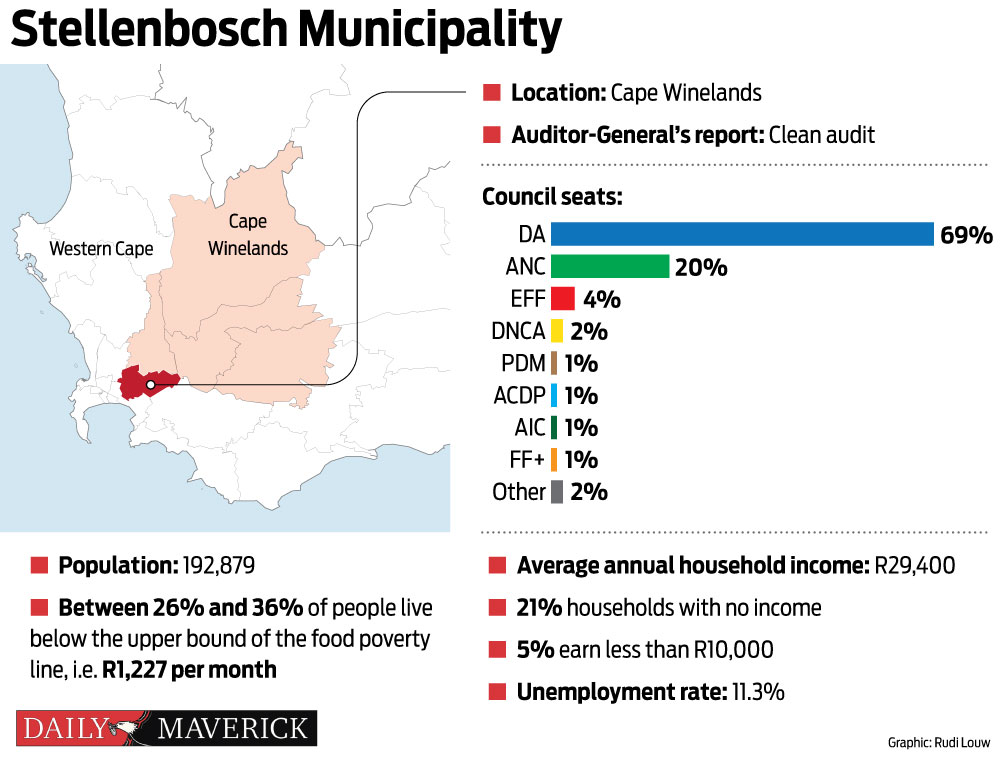 Stellenbosch has been steadily Democratic Alliance (DA)-run for the past 10 years. Before 2011, the town’s municipality was run by a DA coalition and a number of smaller parties, such as the United Democratic Movement.

In the 2016-local government elections, the DA won 30 of 43 seats on the council. Twenty-two wards make up Stellenbosch Municipality.

The university town, accessible via the N1 and N2 national routes, falls within the Cape Winelands District Municipality, one of fewer than 30 that received clean audits in the 2019-2020 Auditor-General (AG) report on local governments.

“Despite the many challenges brought on by Covid-19 and the lockdown, we have improved on our audit performance,” said Stuart Grobbelaar,  spokesperson for the municipality. “This outcome provides assurance to our residents that their money is going where it should. Good service delivery goes hand in hand with quality financial performance.”

The municipality’s budgeted expenditure for 2021/2022 indicates that of its R2-billion planned expenditure, 53% is allocated to trading services (energy sources, water management and so on), 18% to community and public safety, 17% to municipal governance and administration and 12% to economic and environment service.

But Stellenbosch Municipality services a town that was historically put asunder during apartheid, with lingering socio-economic divides between locals that spill over into local governance. Residents define “good service delivery” differently.

Towards Stellenbosch Central, Grobbelaar’s sentiments are echoed. “It’s lekker to live here in Stellenbosch,” said Quintis Roos, one resident living near the town centre. He had no gripe with local governance — good service delivery, clean areas.

Roos resides in ward 7 in the municipality and has lived there for five years. In Roos’ ward, 95% of residents are employed and 89% of residents live in brick or concrete homes. Dwellers fall within the middle-class bracket, earning a monthly income of between R12,801 and R51,200.

“Residents are generally comfortable and when an issue is put forward response is usually quick,” he said.

In the neighbourhood, CCTV cameras are positioned on every street and security patrols cruise the area.

The area is described as “reasonably safe” by residents, but Roos says safety is afforded thanks to private security companies in the area, not municipal law enforcement:

The issue of safety — a priority set out for the ward’s councillor Alwyn Hanekom — was one of the few concerns Roos could point to.

According to the municipality’s Integrated Development Plan (IDP) 2017-2022, there are not enough law enforcement staff to conduct day-to-day patrols in the area, but staff would participate in joint operations. About R120,000 was allocated for the installation of street cameras around the Jonkershoek area.

Atop the ward’s priorities for 2019/2020 were uplifting the Jan Marais Nature Reserve — which attracts residents like Roos, who walks with his kids there, students and visitors; improving the ward’s “pleasant character”; and fostering “appreciation of the ward’s exceptional natural resources”.

Residents living on opposite ends of Roos’ ward, in Pniël and Kayamandi, experience disparate issues.

In Pniël, an area sometimes forgotten between the more familiar Stellenbosch and Franschhoek areas in the municipality, an issue of housing prevails. Pniël stands alongside the Franschhoek Pass.

Other concerns include skyrocketing property tax, electricity and unkempt streets.

“We pay for the same services offered to other affluent wards in Stellenbosch, but do not get the same results,” said Janine Myburgh, a resident of Pniël for almost 56 years and chairperson of the Pniël Heritage and Cultural Trust. She serves on the local Municipal Ward committee.

“Many issues are reported and sent to the municipality, but then nothing comes of it. Pniël and the broader Dwars River Valley residents thus feel that we are at the back end of service delivery,” she said, adding that she was speaking for most of the community.

The small, close-knit community falls within Ward 4 in the municipality, which also includes the areas Kylemore and Johannesdal.

Pniël was established after slaves were emancipated in 1838. Its first inhabitants were freed slaves from neighbouring farms, who built their houses and worked the lands.

After more than a century of self-governance, the area was amalgamated with the Stellenbosch Municipality almost 18 years ago.

Townsfolk are “very unhappy about how things are currently run and feel that they do not get the service they are paying for and what they were used to when they had their own local management board,” Myburgh said.

According to Myburgh, “low-cost housing that is currently in Pniël was initiated by the local management board of then, but the owners only received the title deeds to their properties in 2020”.

“It is the primary responsibility of a municipality to provide affordable housing for all its residents. It is time that this needs to be seriously addressed.”

About 100 people were helped with housing, but “there is a big waiting list”, said another resident in Pniël. “We are ratepayers here… we need a party that can deliver, [the municipality] makes a lot of promises — it is not about a party, it is about service delivery.”

Daily Maverick could not confirm with the municipality or the ward councillor how many houses had been delivered since the 2016 elections.

According to the municipality’s IDP 2017-2022, discussions are in the works between the municipality and the Housing Development Agency (HDA) to assist with the housing demand in the ward.

In the IDP, it is stated that the estimated cost for the municipality’s housing pipeline will be about R9.6-billion over a 10-year period.

Grobbelaar says this 9% excludes capital funding for housing and accounts only for the operational expenditure, such as running costs for construction, administration of the housing waiting list, housing demand database and title deeds registration.

“The capital funding for housing top structures is provided by the Department of Human Settlements, as housing is a national and provincial competency and a municipality acts merely as an implementing agent,” said Grobbelaar.

Decisions about how houses were awarded, how many were built and the amount of funding available were determined by the National and Provincial Government, not the municipality, he said.

Myburgh said the area has had electricity supply issues for as long as she could remember, apart from load shedding.

“Our electricity bills are also very high. If the wind just blows lightly, we are without electricity,” she said. “Electricity to Pniël was always supplied by Drakenstein Municipality, but was taken over by Stellenbosch Municipality about two years ago. It seems that there was never any maintenance done on the Pniël and surrounding lines, so now it is a huge problem.”

The municipality is addressing the problem with a plan to repair the lines over the next three years, she said, adding that she hoped they would stick to the planned repairs and building of a new power station.

Similar issues are felt on the other side of the Franschhoek Pass, in Kayamandi, ward 15 in the municipality. Kayamandi is densely populated. Corrugated homes are built up against one another; 60% of the homes are informal dwellings. At the back of the compact ward are some bricked homes.

There are various ongoing developments in Kayamandi, including a R12-million town centre upgrade, Grobbelaar said.

Many households have been cut off from access to electricity and water here. The tariffs are high and about 69.3% of residents are unemployed.

“We sit here as you see, we are not working,” said Phema Sidinyane, a resident living in Kayamandi since 1993. Sidinyane was sitting on the sidewalk across from her home when she spoke to Daily Maverick.

“We paid for the water and electricity… Then you can’t pay, then they disconnect electricity. How can we pay R4,000 without work?” asked the unemployed Sidinyane.

But according to Grobbelaar, “tariff increases are kept as low as possible” and “electricity tariffs are determined largely by increases set by the National Energy Regulator of South Africa (Nersa)”.

The municipality said it was sympathetic to the “dire” economic context of the country.

Grobbelaar said the municipality has one of the most progressive indigent policies to assist poorer communities — whereby indigent residents apply for relief, which includes free basic water and electricity, on an annual basis.

No residents that Daily Maverick spoke to were aware of the policies.

According to Solomzi Rulashe, a resident in the area who has his own car wash, he and his family sit in the dark for weeks.

“We call the municipality, but they just remind us that we must pay,” he said.

Business owner, Frans George, living in Kayamandi for more than 20 years, said that there was service delivery in the area, “but it just takes long”.

“There’s a drain blocked here for long, and it gives off a bad smell,” said George. “The place is dirty… Kayamandi is not going forward — and Stellenbosch Municipality is one of the richest, but service delivery is not there.