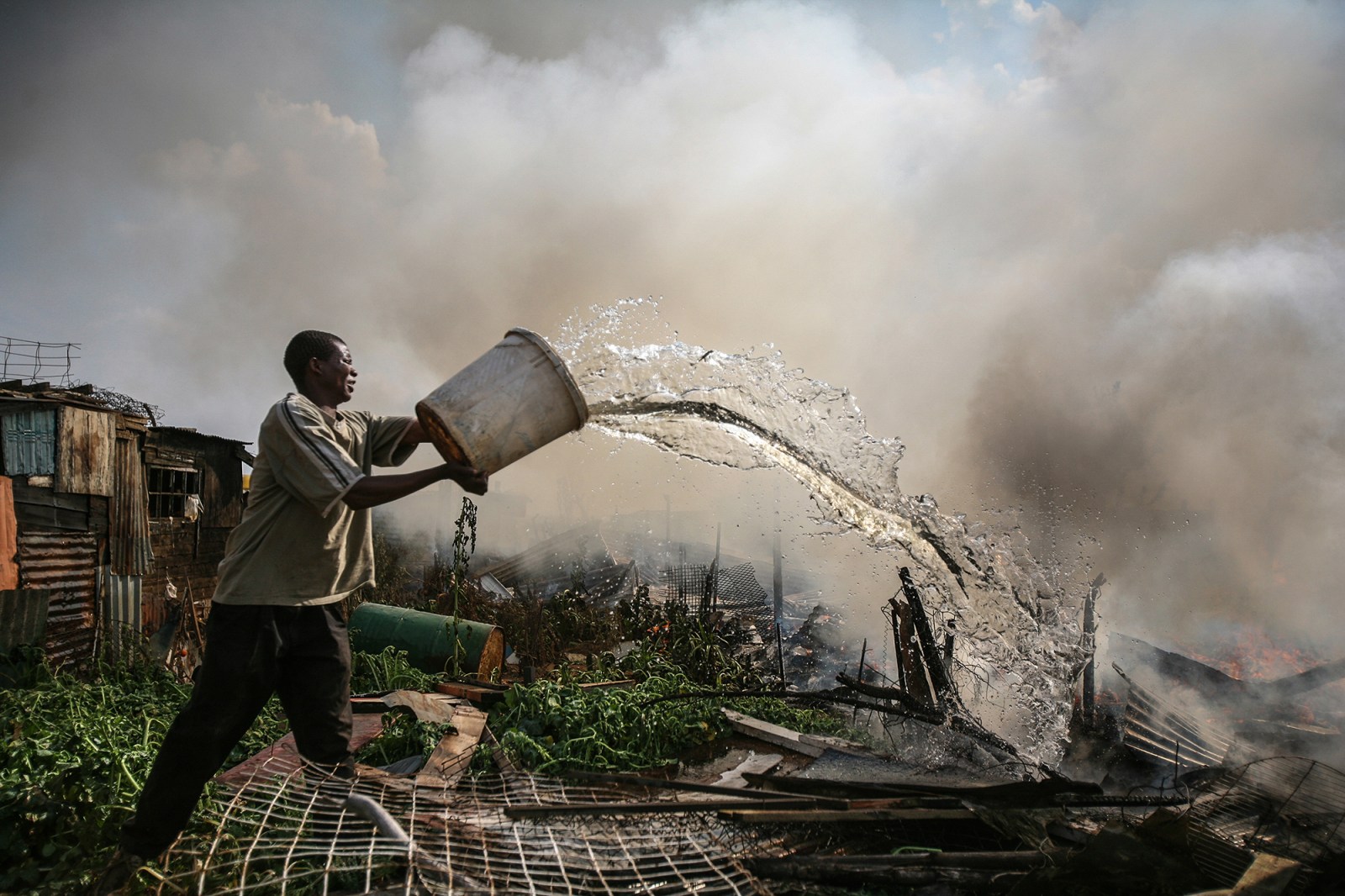 The City used to provide kits swiftly for fire victims but the end of a grant means that Sassa has taken over this service and help arrives more slowly.

“My mother most probably suffered an epileptic fit while frying fish on the stove before our shack caught fire,” said Asanda Siphango of Europe informal settlement in Nyanga.

“When I saw my mom’s body being put into a white plastic bag, I was shocked … My whole body shook,” she said.

Witnesses say the fire service struggled to access the site.

Jermaine Carelse, Fire & Rescue Service spokesperson, confirmed the death. He said the body was handed over to the police. The cause of the fire is yet unknown.

The family is battling to raise funds to bury their mother. “We relied on her disability grant for basic necessities,” said Siphango.

She is in her third year at the Cape Peninsula University of Technology, but she has now lost her laptop, books and all her belongings in the fire.

Busiswe Tinga, who is eight months pregnant, is among those left homeless. When we first spoke to her on Sunday she burst into tears and said, “My worry is that I may give birth anytime.”

She is now sharing a bed with a male cousin and his girlfriend and their child. “I don’t want to give birth. How will I care for the baby while I stay at my cousin’s place?” she said.

The fire destroyed all her belongings, including the baby clothes she had for her expected child.

She has two children, in Grade 1 and Grade 6 at Xolane Primary School in Gugulethu, but they stopped attending classes after the fire.

“My kids have no clothes other than the school uniforms they wore to school on the day of the fire,” said Tinga.

A community activist who runs a soup kitchen, Betty Duli-Mkinase, has been giving the fire victims masks, toiletries and three meals a day.

She said City officials arrived only on the Sunday. “They should have come earlier to assess the fire victims’ needs and see where they could help.”

She said fire victims had to remove the rubble themselves so that they could clear the plots and try and rebuild.

Ward 40 Councillor Bongani Ngcombolo (ANC) said the families are struggling to get materials to rebuild their shacks. He was busy seeking donations of clothes, furniture and building materials.

Charlotte Powell, spokesperson for the City’s Disaster Risk Management (DRM), said the South African Social Security Agency (Sassa) has been informed so that it can provide humanitarian assistance.

Shivani Wahab, from Sassa communications, said she could confirm that humanitarian relief has been activated for the fire victims.

Help for fire victims appears to be delayed by a complicated bureaucracy.

“Sassa is dependent on the City of Cape Town for detailed information. Only once all the required detail is provided, can Sassa activate humanitarian relief,” said Wahab.

She said the procedure is as follows: “Sassa is notified of any disasters by the City of Cape Town. An incident report is provided to Sassa, which includes a list of affected persons. The Sassa Disaster Unit then conducts a site visit as per policy. Sassa compiles an incident report which is submitted for the activation of a service provider for the provision of immediate disaster relief.”

On Tuesday, fire victims were still busy trying to salvage building materials and straighten burnt zinc sheets to construct shacks. They were sharing a meal of dried mielie pap.

Nosisa Tyelinzima said there is no community hall, so she and other fire victims had been sleeping at friends’ places. “Our friends are tired of us because we come along with our many kids without food and finish their groceries,” said Tyelinzima.

Sheila Jikeka lost everything in the fire. She is sleeping on the floor at a friend’s shack that was badly damaged in the blaze. “Women sleep at friends’ places, but men stand outside or inside half-built shacks and make fires to keep warm,” she said.

Now the City “enables and facilitates soft relief, such as donations, site clearing, verification and assessments for assistance where possible”.

The situation used to be less bureaucratic, and only involve the City, not both the City and Sassa.

“[Cape Town] was the only metro in South Africa to provide enhanced fire kits to fire-affected residents as an additional service, outside of formal declared disasters. It was paid with the national grant funding. Now there is no more money.

“We call on national government not to reduce grant funding so that these relief kits may be provided again,” said Booi.

According to Jermaine Carelse, spokesperson for City Fire & Rescue, the service has responded to 1,195 fires in informal settlements this year. From January until the end of June, 95 people have lost their lives in fires of which 13 died in fires in formal homes.

Powell says the City embarks on regular education and awareness programmes within communities.

But as long as there are informal settlements, fire will remain a deadly and significant hazard.

Councillor Ngcombolo said close to 3,000 families currently stay in Europe. Some have jobs at factories with the Expanded Public Works Programme, while most “live off government grants”.

The settlement has enough water taps but needs more toilets. “We will add 150 toilets to the existing ones before December this year to address the shortage,” he said.

The settlement has been around since 1989.

“In 2016, there was a confirmation that there would be a [formal housing] development, but there is a delay,” Ngcombolo said. DM