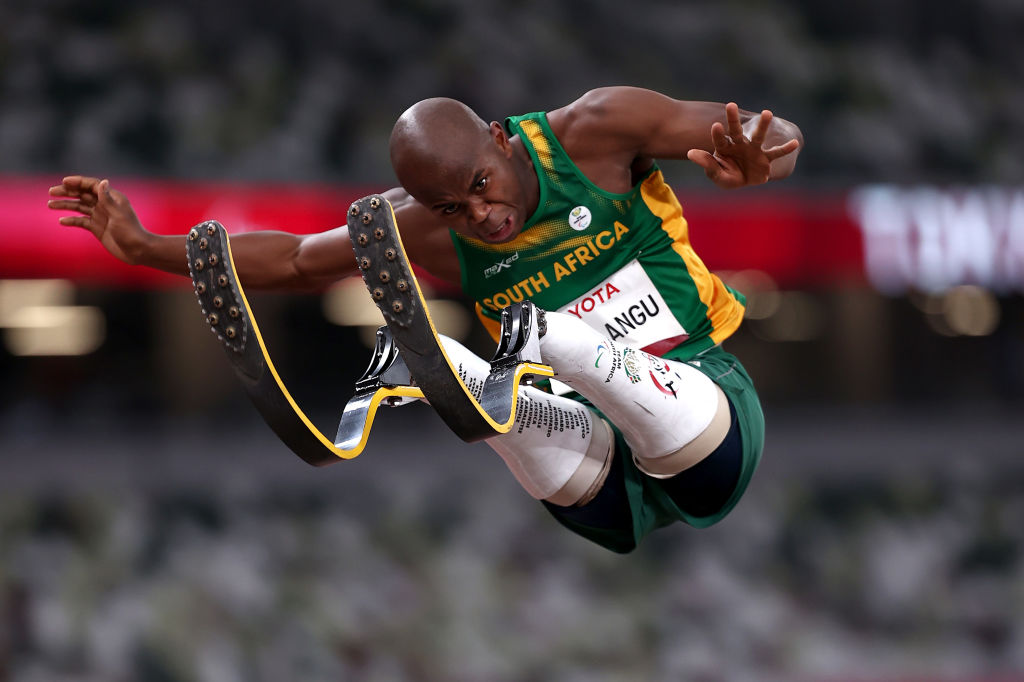 Team SA’s Ntando Mahlangu broke the world record with a final leap of 7.17m to win gold in the men’s T63 long jump, a matter of minutes after Anrune Weyers had sped to the women’s T47 400m gold in 56.05 seconds.

Only the greats win gold medals the way that Ntando Mahlangu did at the Olympic Stadium in Tokyo on Saturday night. Most people will argue that the praise is premature, given the South African is only 19 and the Paralympic gold medal he won in the men’s T63 long jump competition was the first of his career.

Most people will be wrong. Because the way that greats announce themselves is exactly in moments like Mahlangu chose. He’s on his way to Paralympic stardom and he is probably already the best double amputee above the knee in the world over 100m, 200m, 400m, 800m and in the long-jump pit.

We won’t know that, though, until there are those events in which he can compete, with his current Paralympic classification class restricting him to the long jump and the 200m here in Tokyo. Of the two events, the sprint is his preferred, so you can expect fireworks from him later in the week.

The manner in which Mahlangu won gold, on the biggest stage in Paralympic sport, marks him down as a potential superstar. It’s hard to not see him becoming one of South Africa’s most revered athletes of all time.

Because greats make an entrance. Mike Tyson won the world heavyweight boxing championship at the age of 20 by brutally knocking out Trevor Berbick. Boris Becker won Wimbledon at 17 and Michael Phelps was 18 when he arrived with a splash on the Olympic scene. If you’re good enough, you’re old enough.

Ntando Mahlangu is 19 and is on the brink of Paralympic stardom. Create new events for him and watch him dominate. He could probably even do so against able-bodied athletes, having clocked 1min 43.31sec over 800m.

However, it was how he won the Tokyo 2020 Paralympic gold medal that marks him as a special talent. This was the finest moment of a career that includes a silver medal in the 2016 Rio Paralympics aged just 14. Since then he has won a slew of titles, but this is a Tyson, Becker, Phelps moment when it comes to the Paralympian.

As one of three T61 athletes (double amputee above the knee and competing with two prostheses) against seven T63 long jumpers (single amputee who use one prosthetic), he was always going to be up against it. Mahlangu’s personal best, a T61 world record, was 6.47m. The world record in the T63 class is 7.24m and the Paralympic record 6.70m.

Germany’s Leon Schaefer and Denmark’s Daniel Wagner (both T63s) were 7m-plus athletes and favourites to fight it out for gold and silver on another muggy, spectator-free night inside the Olympic Stadium.

Wagner opened with a 7.07m leap to soar to the top of the leaderboard. Mahlangu replied with a 7.02m effort, some 55cm further than he had ever jumped before. Incredibly, he was 5cm behind gold.

Mahlangu’s subsequent efforts were 6.63m, 6.62m and 6.93m. With two jumps left, he was sitting in the bronze medal position as Schaefer had produced a late 7.05m and the South African responded with a 6.44m effort.

“After I jumped the 7m I got a bit too excited. I started to do other things. I was taking them slowly and my back wasn’t feeling great, but I didn’t want to tell my coach.”

One jump left. It would take a second world record from him on the night to at least scare gold and silver. A deep breath, and then a broad smile as he waited at the top of the runway. “Before the last jump I checked with my coach. He said that I should just stop what I’m doing and jump, but he told me in a straight way. I knew it was now or never. I was calm. I knew my last jump, I’d give it my best. I said a prayer, ‘If this is the time, let’s do it… if not, we take the next event.’ I think I was answered.”

Cleared for take-off. He thundered down the tarmac and hit the white board. Up, up and away he went into orbit and landed in the sand. Mahlangu knew. They knew. The whole world soon knew. The scoreboard flashed up 7.17m, a world record by another 15cm as bronze turned into gold.

“I went hard; sjoe, my bum is very sore from landing, but I got the gold medal and the world record and that’s great, it’s great positive news for South Africa.”

That’s how you announce yourself. That’s how you win Paralympic gold. Against the odds, showing buckets of BMT, when the easier option would be to take the bronze medal against two T63 jumpers, and accept that you’ve broken the T61 world record and start thinking about the 200m.

Not Mahlangu, a 19-year-old who has the potential to become a South African sporting great. Like a champion boxer who has had to come from behind to win by a knockout in the last round, the teenager did just that.

When Anrune Weyers one day looks back on her glittering career, she will undoubtedly place her gold medal-winning performance at the Tokyo 2020 Paralympics as the biggest achievement of her sporting life.

But this was about the gold medal, not a world record. And that gold medal is hers to savour.

This was also her first Paralympic gold to go with the two World Championship golds, from 2015 in Doha and 2019 in Dubai. And afterwards the 28-year-old acknowledged that Tokyo 2020 beats anything she has previously achieved.

“This one is special. The journey here was not easy,” she said after a dominant display where she seized control of the final in the last 200m and powered away to win by a full 1.27 seconds.

“This medal represents so much of what I’ve been through. It’s my first Paralympic gold, and it will always be special. I get emotional when I start speaking about Covid. I had Covid in June.