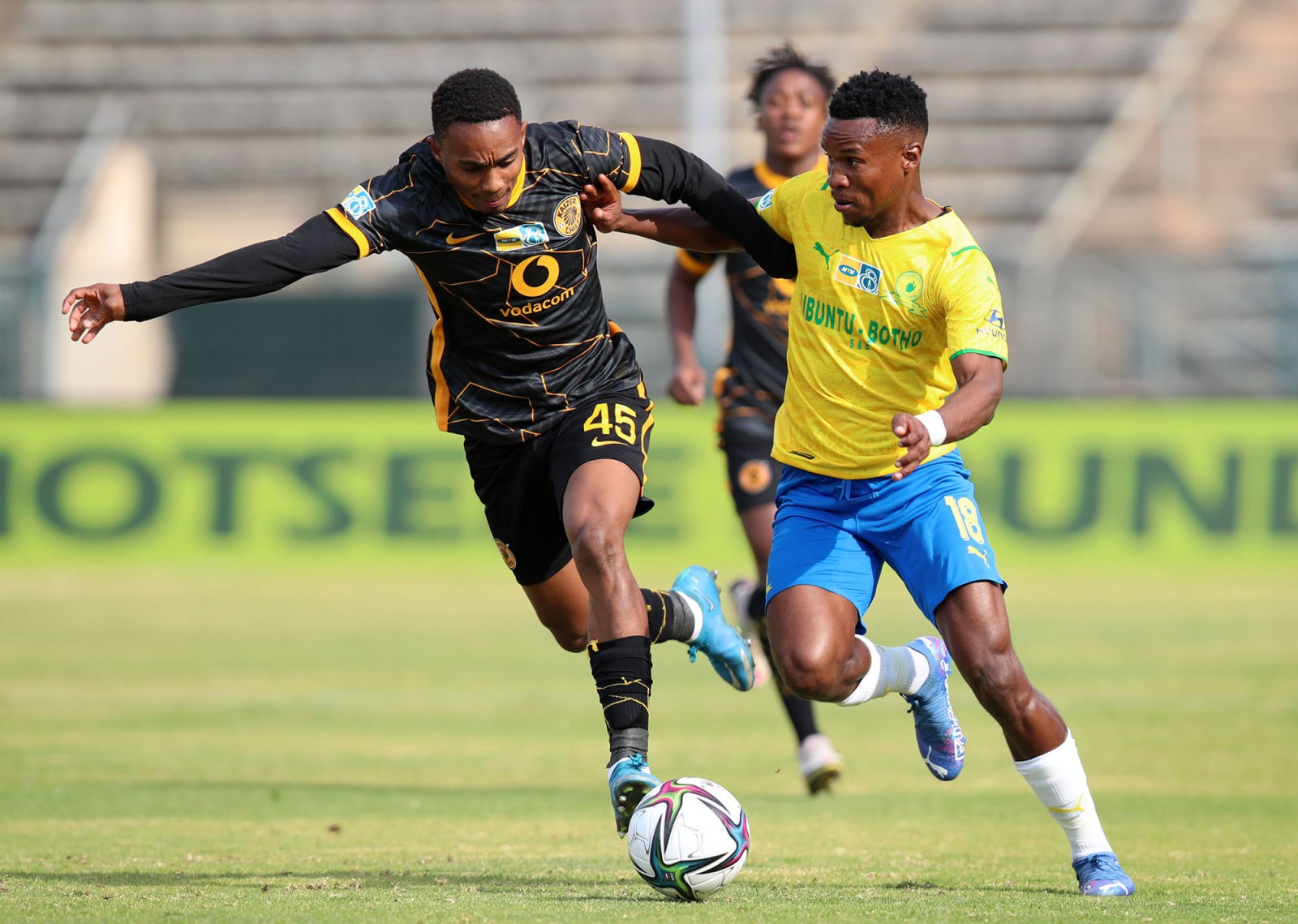 Themba Zwane of Mamelodi Sundowns is challenged by Njabulo Blom of Kaizer Chiefs during their MTN8 quarterfinal at Lucas Moripe Stadium in Pretoria on 15 August 2021. (Photo: Muzi Ntombela/BackPagePix/Gallo Images)

Mamelodi Sundowns are eyeing a fifth league title in a row while their rivals are out to end their respective droughts.

The marathon that is the DStv Premiership is back following a two-month hiatus. As has been the case in the previous four seasons, Mamelodi Sundowns come into the campaign as the defending champions after a record-setting fourth league title in a row.

The Tshwane giants were in imperious form last season, setting a new unbeaten South African top-flight record as they went 22 games unbeaten. They will be keen to start the 2021/22 campaign on a similar note as they eye a record-extending league quintuplet league title.

Sundowns have splurged in the transfer market once more, bolstering what was already a formidable group of players.

“Because we have improved, we look to dominate a football match. That is the way we know how to play,” said Sundowns co-coach Rulani Mokwena.

“We worked very hard last season to lay down a benchmark in terms of a certain way that we play, and to put in a holistic model that has certain principles in the way we play, and it will be extremely naïve and foolish for us to discard that all over again. A lot of the work we put in to create dominance and not just contest football matches is what we have to continue to do.”

In their opening game, Masandawana face last season’s runners-up in the Premiership, AmaZulu.

The KwaZulu-Natal outfit, coached by Bafana Bafana’s all-time leading goal scorer Benni McCarthy, have their eye firmly on derailing the Sundowns freak train that has been unstoppable for years now.

Usuthu, perpetual relegation candidates in seasons past, have grown exponentially since KZN businessman Sandile Zungu took over the club from the Sokhela family at the beginning of last season.

McCarthy, who took over the reins at the club halfway through last season, broke a number of records at the club. He led them to their highest points haul in the Premiership, and as a result, their highest finish in the top flight.

He also oversaw a 16-game unbeaten run and says his charges are looking to apply themselves as best as they can against Sundowns when the sides clash in the season opener on Friday afternoon.

“In life, everything you want to achieve, you have to work hard for it, and playing against Sundowns is no different. We are going to work hard but we are also going to try and make life uncomfortable for them,” said McCarthy.

“We’re hoping for the best possible outcome from this game. It’s never easy playing the champions but we are optimistic and we think we can have some joy and some success.”

Meanwhile, Stuart Baxter’s attempt to end Kaizer Chiefs’ six-year Premiership drought starts with a match against TS Galaxy, who are in the sophomore year of their top-flight journey.

Amakhosi led the pack for the majority of the 2019/20 season only to lose out on the final day to Sundowns.

Last season, led by decorated South African coach Gavin Hunt, they recorded their lowest points haul in the Premier Soccer League (PSL) era – 39. Amakhosi had a forgettable season which ended with them just sneaking into the top eight, and was compounded by a Fifa-imposed transfer ban over the unethical signing of Andriamirado “Dax” Andrianarimanana.

This off-season the ban ended and the Naturena-based outfit has gone on a spending spree. The likes of Sifiso Hlanti, Keagan Dolly, Cole Alexander, Phathutshedzo Nange and Bafana international Njabulo Ngcobo have joined.

Former Sundowns playmaker Dolly made an immediate impression for his new side as they were knocked out of the MTN8 by his former side.

Dolly, who joined as a free agent after leaving French side Montpellier, showed glimpses of what he has to offer this season as he set up one of the goals which saw Amakhosi mount a comeback from 2-0 down to level matters and take the game to extra time last weekend. They eventually lost 2-1 on penalties.

“We showed character and showed what we are capable of [against Sundowns]. A lot of people saw that we are quite serious this season and we want to compete and win things. I think with the performance, coming down from two-nil down against a good team like Sundowns, shows we mean business,” said Dolly.

Chiefs’ neighbours Orlando Pirates head into their opening game on Saturday against Stellenbosch with some uncertainty after their coach Josef Zinnbauer abruptly resigned following their loss to Swallows in the MTN8 quarterfinals.

Fadlu Davids, who worked with the German coach as assistant during his one-and-half-year stay in South Africa, says the squad was left shocked by his sudden departure.

“When a coach resigns it creates a lot of shock,” Davids said. “The technical team and players were shocked, but we need to adjust and look forward.”

He and the Buccaneers’ second assistant Mandla Ncikazi will take over the reins for the moment, with the club yet to announce a replacement for Zinnbauer. DM