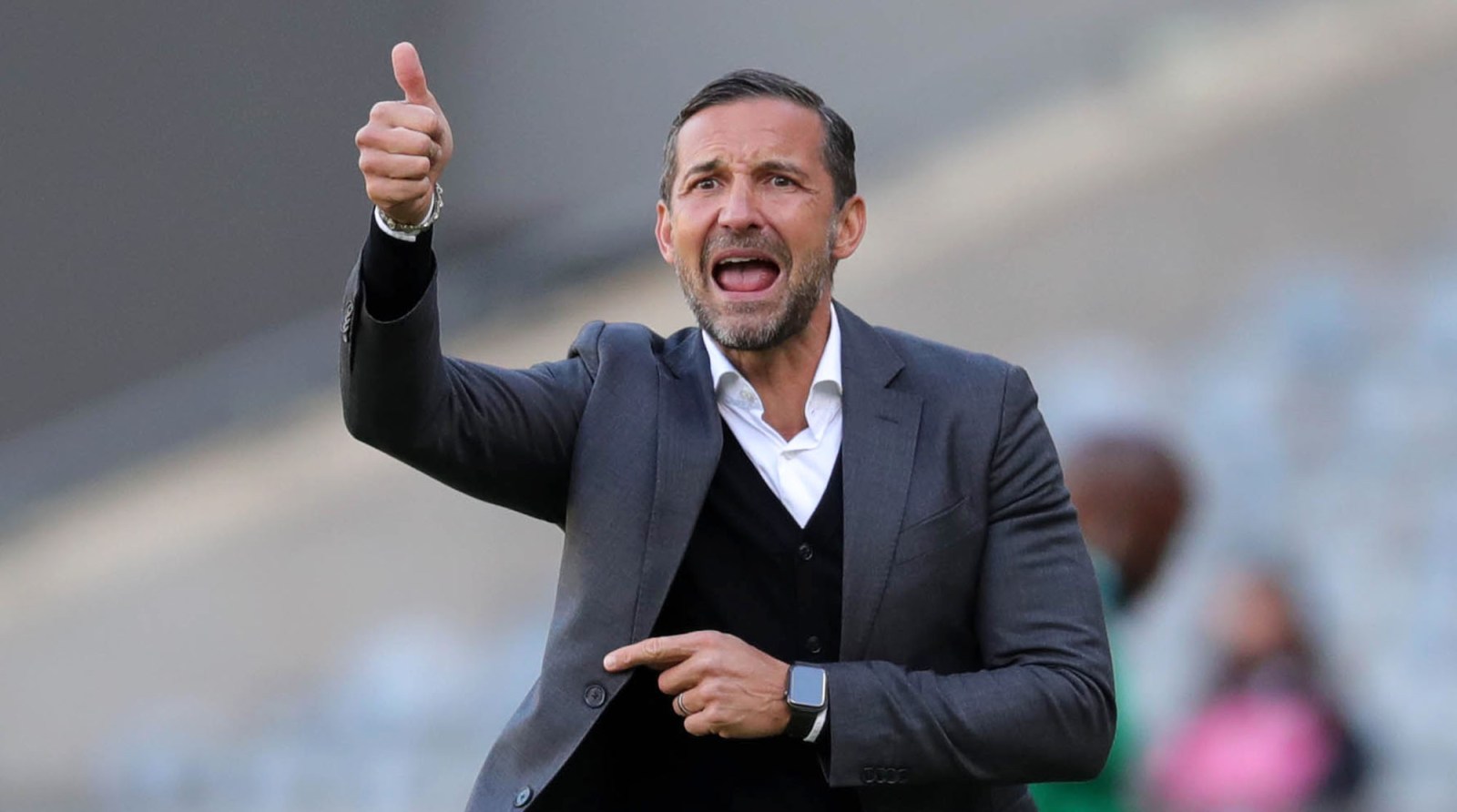 Josef Zinnbauer, coach of Orlando Pirates reacts during the DStv Premiership 2020/21 match between Orlando Pirates and Mamelodi Sundowns at Orlando Stadium, Johannesburg, on 02 May 2021 ©Samuel Shivambu/BackpagePix

On Monday, Orlando Pirates confirmed that the head coach had handed in his resignation. The German departs with a 52% win percentage and one trophy from his one-and-a-half season stint.

The original Soweto derby, between Swallows and Orlando Pirates, is the straw that broke the camel’s back. Zinnbauer has resigned as the Buccaneers’ coach, just more than a year and half after joining the Ghost ship as skipper.

The Buccaneers were victims of a seven-minute Ruzaigh Gamildien brace blitz as they were beaten 2-1 by the Dube Birds and subsequently bundled out of the MTN8 competition they won last season. The result snapped the camel’s back in half.

“I would like to thank the chairman and management for the opportunity they have given me,” said Zinnbauer in a club statement.

“Unfortunately, my time at the club has come to an end. I have enjoyed my time here and would like to extend my heartfelt gratitude to the supporters.

“I have spent the past two years away from my family and for this reason I have decided to hand in my resignation. I would like to wish the club and its supporters all the best for the future,” the 51-year-old concluded.

Before his back gave in, Zinnbauer had been Pirates’ saviour as they stumbled around blindly in the desert. They had starved and been thirsty for silverware for six years – much too long for a juggernaut of South African football.

Zinnbauer brought them to a mini oasis in the form of the MTN8 in the 2020/21 season. This helped to temporarily quench the Ghost’s thirst. There was hope that after this sustenance the Buccaneers would have had enough drive and resilience to find even more oases. Following that victory, the supporters were already claiming a treble for the end of the season.

When the end came, it was only the MTN8 oasis at which they had slaked their thirst. When it dried up they found themselves wandering in the arid desert once more.

An oasis the size of the DStv Premiership, coupled with that drought-ending MTN8 title, would have been perfect for Pirates’ desires.

Instead, Zinnbauer’s party of merry men, boasting some of the finest crewmembers a Pirate ship captain would dream of, couldn’t find a way out of the desert.

In the Premiership they finished third, 17 points behind eventual league champions Mamelodi Sundowns.

They also finished behind AmaZulu, who do not boast as many resources. That meant they missed out on CAF Champions League qualification.

Heading into that disappointing campaign, the expectation was that they’d halt Sundowns’ run of winning one league title after another.

Superstar crewmembers from the fallen Bidvest Wits pledged their allegiance to the Pirates’ cause. The likes of Deon Hotto, Bafana Bafana captain Thulani Hlatshwayo and midfield martial Thabang Monare joined the Pirates crew.

The Bucs also recruited Richard Ofori from Maritzburg United. They have struggled in the goalkeeping department since the death of Senzo Meyiwa in 2014. These players were joining a crew which had stars such as Thembinkosi Lorch, the 2019/20 season top scorer Gabadinho Mhango and Vincent Pule.

The camel had been provided with the best resources to ensure another oasis was found. He did not live up to these expectations. Zinnbauer leaves Pirates with a record of 35 wins, 20 draws and 13 losses in his 68 matches in charge of the Buccaneers.

Swimming against the tide

Zinnbauer joined the Soweto giants in December 2019 as a relatively unknown entity.

He had experience from coaching in the lower divisions of German football. He did have a short stint with Hamburg SV when they were still competing in the Bundesliga back in 2014. He was sacked in 2015.

So, when he arrived to replace Rulani Mokwena, questions around his pedigree arose. He also happened to be a victim of spectator politics.

A segment of Pirates supporters were aggrieved at Mokwena being demoted to Zinnbauer’s assistant only five months after the former’s initial appointment.

That section of the Pirates faithful felt Mokwena deserved more time to steer the ship away from crashing into an iceberg. The Pirates hierarchy were not that patient and acted hastily to rope in Zinnbauer. He was the man scapegoated by some of Pirates followers for Mokwena’s demotion.

He won some supporters over when the results started improving. That he came halfway through the season, when Pirates were in 11th place, and pushed them to a third-place finish had many sections of the team’s support base giving him the benefit of the doubt.

Their faith in him seemed to be vindicated as he led the side to their first trophy in six years with the MTN8 at the beginning of his first full season. However, he and his charges failed to ride that wave.

On a few occasions last season Zinnbauer lamented points which were dropped unnecessarily. Like that shock 2-0 loss to Black Leopards in January 2021. The dropped points, which included 11 draws in the Premiership, added to the frustrations of those affiliated with Pirates.

It also mounted pressure on Zinnbauer, with the side seen as not being ruthless and clinical enough at times. There were questions over a rigid playing style, team selections and even substitutions.

Many times Zinnbauer addressed his detractors directly, including his utterances after Pirates were bundled out of the CAF Confederation Cup quarterfinals by Raja Casablanca last season.

“But you have the other side of the supporters who give you positives. Don’t forget we won a title this year‚ we went through [the Confederation Cup] group stage and were in the quarterfinals.”

In the end, it seems this all proved to be too much for Zinnbauer and he has thrown in the towel.

The Buccaneers are yet to announce a successor, but the ground is fertile for Mandla Ncikazi to step in as Zinnbauer’s successor.

The 52-year-old joined as the German’s second assistant following a fairytale campaign with Golden Arrows, a side he led to fourth place in the 2020/21 season. He has spent pre-season with the team and is familiar with the club’s inner workings by now.

Of course, before the season began, Sundowns’ assistant coach Steve Komphela was also linked to a switch to Pirates. The deal never happened, but those murmurs will become loud once more – although Sundowns are likely to veto such a deal.

The Buccaneers’ hierarchy could, of course, cast their fishing rod towards Europe, as they did with Zinnbauer almost two years ago. One thing is certain, Zinnbauer’s sudden departure will not be ideal for Pirates with the start of the Premiership just a few days away. DM