Can the Treatment Action Campaign stem the tide of preventable deaths in Gauteng’s public health system? 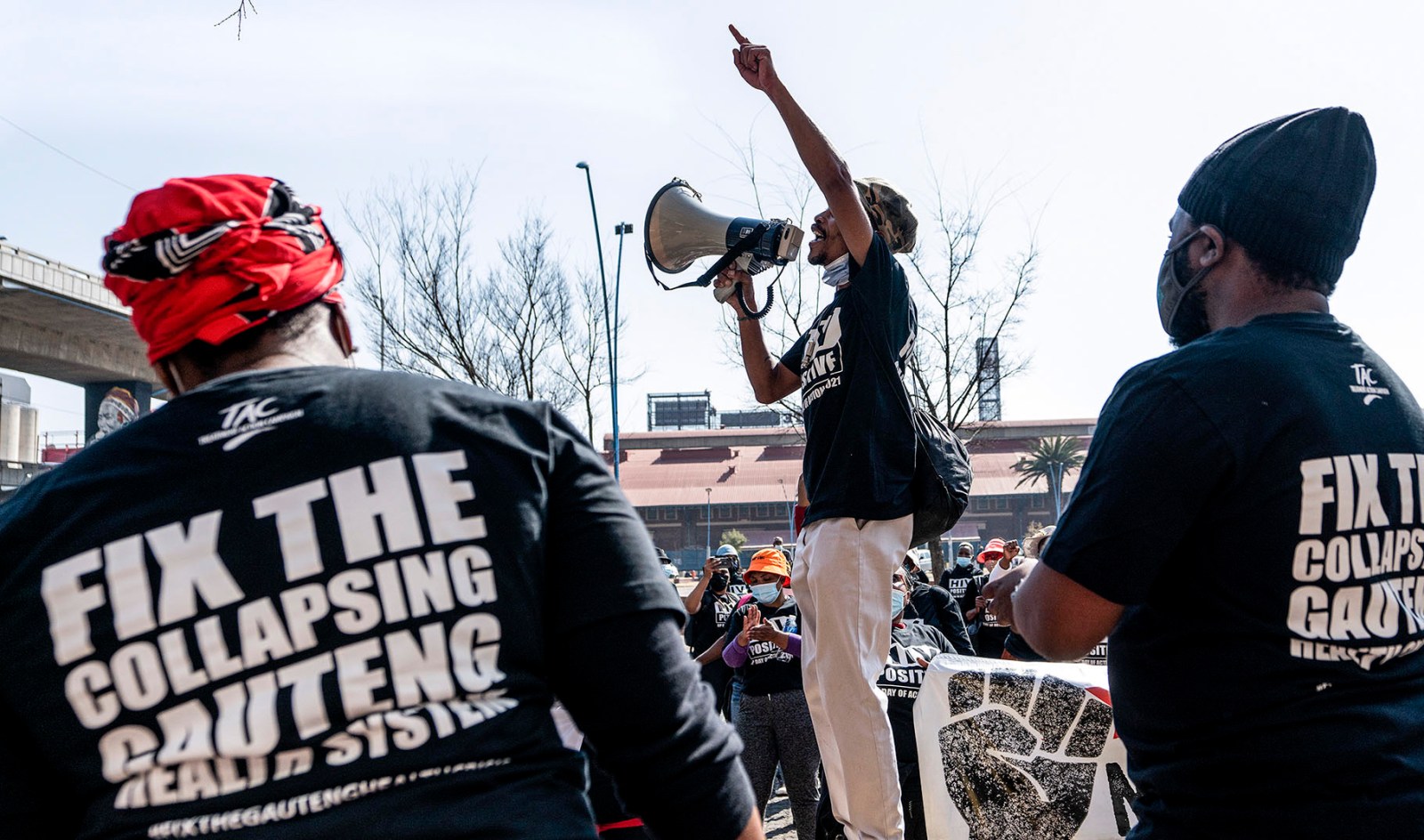 A man addresses members of the Treatment Action Campaign outside the Gauteng Office of the Premier. (Photo: Shiraaz Mohamed)

In the midst of a pandemic, surely there should be no need to still mourn preventable deaths because of an incompetent and systematically incapacited health sector when health organisations have been warning about this collapse for years.

A former prime minister of Barbados, Owen Arthur, once said: “For he who has health has hope; and he who has hope, has everything.”

The right to have access to health services, which can be found in Section 27 of our Constitution, is arguably one of the most important rights because without our health we probably wouldn’t be around long enough to do much of what is required of us while living, never mind have the hope that comes with being healthy.

In recognising the importance of a rights-based approach to society and health as a human right, the World Health Organization (WHO) states that:

“Another feature of rights-based approaches is meaningful participation. Participation means ensuring that national stakeholders – including non-state actors such as non-governmental organisations – are meaningfully involved in all phases of programming: assessment, analysis, planning, implementation, monitoring and evaluation.”

However, in South Africa it seems access to healthcare services is guaranteed only to those who can afford private medical aid schemes and services. Poor people are forced to seek public healthcare services, which are limply provided by the state, and are therefore forced to rely on civic health organisations like the Treatment Action Campaign (TAC) to ensure that the government delivers on this healthcare.

The long-standing tension between the TAC and the Department of Health is well documented and dates back to the TAC’s formation in 1998.

The TAC has mounted many campaigns and protests, issued memoranda, produced numerous reports, made parliamentary submissions and invited government officials to its congresses, but its demands continue being met with empty promises and placating rhetoric.

Last week more than 70 members of the TAC camped on the pavement outside Gauteng Premier David Makhura’s office on a cold winter’s night. This was after they had held a protest that featured them holding a coffin symbolising the many deaths occurring at the hands of the department. The memorandum they brought to the Gauteng Department of Health contained the following demands:

Most of these demands are not new and had initially been brought to the fore as far back as 2012 in the TAC’s Monitoring our Health report. In a Newzroom Afrika interview, TAC General Secretary Anele Yawa said that the decrepit state of government health facilities is evidenced throughout the country, showing a disregard for the Constitution by government officials and a culture of corruption.

“The problem we face in Gauteng is a problem that we face around the country where you find that our government does not have money to provide quality healthcare services to the people, but we see them having money to steal and loot. We know what the former minister Zweli Mkhize did with the Digital Vibes issue.”

In July this year the Ritshidze Project, a partner organisation, released a report on the state of the North West health system, highlighting short staffing, corruption, negligence and the stocking-out of medication, particularly chronic medication.

In the midst of a pandemic surely there should be no need to still be mourning preventable deaths because of an incompetent and systematically incapacited health sector when health organisations have been warning about this collapse for years.

To hold the portfolio of providing healthcare for the country is admittedly a huge burden; however, it is not impossible when one jealously safeguards the resources needed to do this and accepts the helping hands of civil society organisations, which through on-the-ground networks provide information and offer the skills necessary to do this.

The Office of the Premier’s response to the TAC’s memorandum was that they would work with the TAC to address the issues tabled and form a joint task team to resolve the matters. It remains to be seen how this will work out as task teams are the order of the day when it comes to government responses. The real test will be whether any results are yielded and tangible changes are seen by poor people in the public health system.

There is an indignity that comes from having to beg for the value of your life to be recognised that comes with being denied basic human rights, particularly those that are engendered in our Constitution. This indignity, however, seems to only be reserved for the poor. DM/MC