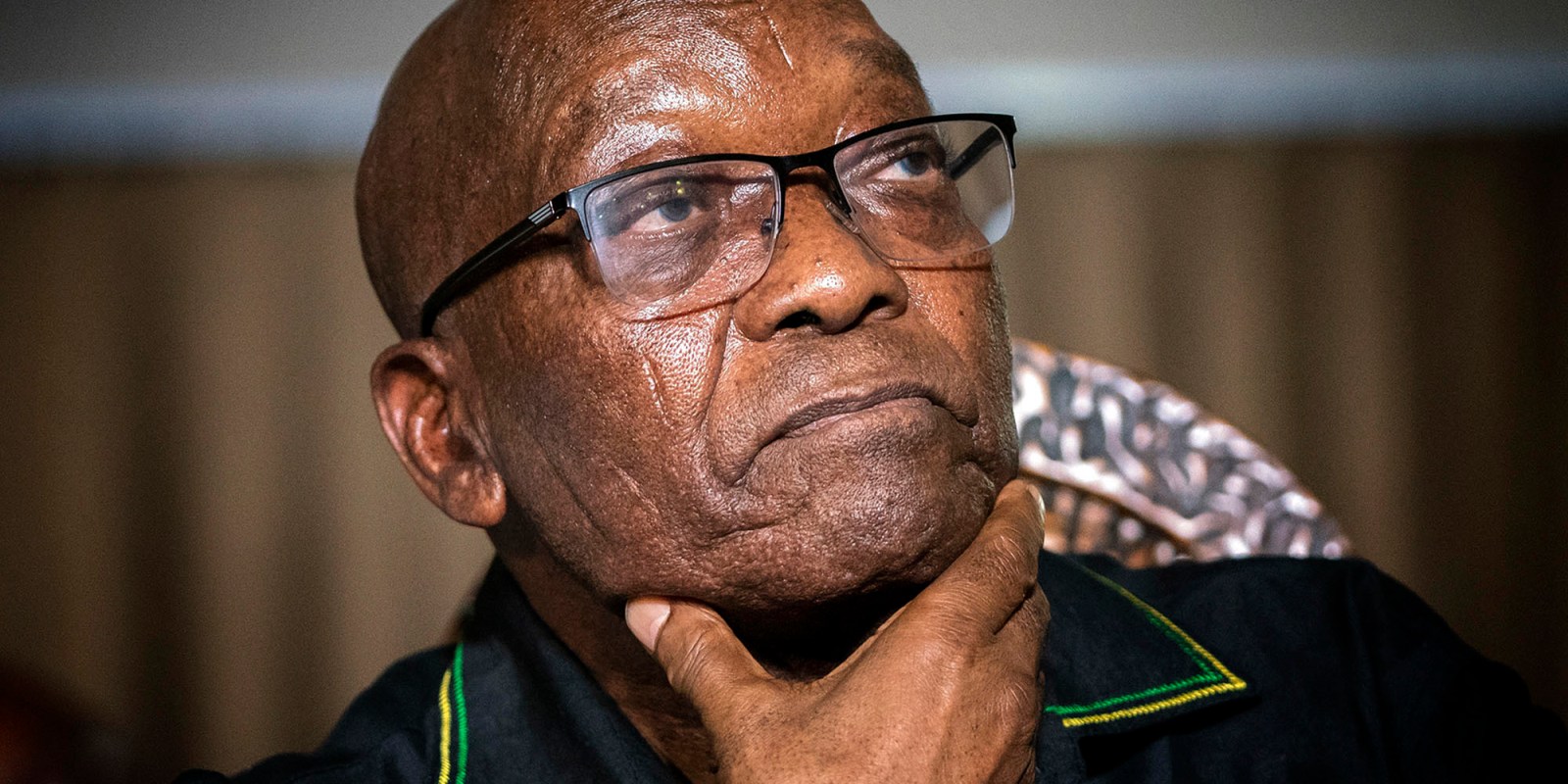 No doubt ex president Jacob Zuma and Helen Zille’s friendship is based in their common experience of being rejected by “people whose lives and careers they helped to build,” but even more in their joint mastery of the national art of the misuse of words. (Photo: Shiraaz Mohamed)

As former President Jacob Zuma recovers from an operation at a KwaZulu-Natal hospital, his legal team has had another crack at getting him out of jail, calling on the Constitutional Court judges not to let ‘pride’ and ‘pettiness’ deter them from considering his rights.

Former president Jacob Zuma’s legal team filed their latest papers in the Constitutional Court on Friday, responding to a call by the court for the legal teams in the case to make fresh submissions on the role of international law in the case.

On Sunday, the Department of Correctional Services (DCS) released a statement confirming that Zuma “underwent a surgical procedure” on Saturday “with other procedures for the coming days”.

“As a result, DCS is unable to predict a discharge date as our priority at this stage is for Mr Zuma to be afforded the best care possible,” department spokesman Singabakho Mxumalo said in a statement.

Zuma was sentenced to a 15-month jail term on 29 June after he refused to testify at the State Capture commission.

The Constitutional Court called, in particular, for the parties to file papers between 13 and 18 August that consider the role of the UN International Convention on Civil and Political Rights (ICCPR), with specific reference to Articles 9 and 14.

Article 9 deals with the right to liberty and security of a person and unlawful arrest, whereas Article 14 says everyone convicted of crime shall have the right to have the sentence and conviction reviewed by a higher tribunal according to law.

Zuma’s legal team argues that “the mere issuing of the directions constitutes the clearest evidence and acknowledgment” by the court that it should have considered the convention.

“At the risk of stating the obvious, if, as is clearly the case, the court failed or omitted to consider international law, as it must, then this fact alone cries out for the reconsideration of its decision in line with Rule 42 of the Uniform Rules of Court as read with Rule 29 of the Rules of the Constitutional Court, which calls such application to be done ‘with such modification as may be necessary’ i.e. taking into account the constitutional context,” Zuma’s lawyers argue in court papers.

“South Africa signed the ICCPR in 1994 and ratified it in 1998. The relevant principles in the ICCPR are therefore binding on South Africa.”

The Zuma team argues that the court has violated Zuma’s fair trial rights and that international law requires the judges to allow him a full criminal trial before sentencing him.

“Article 9 (1) of the ICCPR recognises the rights to liberty and security of the person. It prohibits arbitrary arrests and detention, requires any deprivation of liberty to be in accordance with the law, and in Article 9 (4) obliges parties to allow those deprived of their liberty to challenge their imprisonment through the courts. Articles 9 (3) and 9 (4) imposes procedural safeguards around arrest, requiring anyone arrested to be promptly informed of the charges against them, and to be brought promptly before a judge,” they argue

The Zuma team warns the judges of the Concourt against allowing their personal feelings to cloud their judgment, saying they could have been “hurt by the attitude of Mr Zuma”.

.“The judges should have reflected on a fair process of adjudicating their complaint against him. In the circumstances of this case, he simply did not have an impartial court of disinterested prosecution required for criminal contempt prosecution,” they say.

“A correct reflection of the ICCPR within our Constitution would lead to the conclusion that Mr Zuma’s incarceration was a grave judicial error of which it has ready remedies to restore its moral and constitutional authority to avert the temptation of entrenching elsewhere within the judiciary what Justice Frankfurter of the US Supreme Court said is the ‘pompous wielders of authority who have used the paraphernalia of power in support of what they called their dignity’.”

The Zuma team say that by undoing its initial decision to incarcerate Zuma the court would be performing a “courageous act”.

“The Constitutional Court must also accept, as other judges in comparative jurisdictions, that like the rest of mankind they may be affected from time to time by pride, passion, by pettiness and bruised feelings, by improper understanding or by excessive zeal.”

Meanwhile, Democracy in Action have also submitted their arguments to the court, saying the questions of international law should have been dealt with before Zuma’s incarceration.

The NGO describes itself as “a civil society organisation that focuses on strengthening of our democracy, protection of our constitution, promotion of our human rights and rule of law and fighting against the triple challenges facing the country”.

“It is testimony to the thoroughgoing processes of this Court that it has now called for submissions on implications of customary international law on this unprecedented detention of a former Head of State by the apex Court without being afforded fair trial rights. For that, this Court deserves commendation, not condemnation,” Democracy in Action says in court papers.

The organisation is in agreement with the Zuma legal team that international law is on Zuma’s side and should see the court rescind its initial decision to have him jailed.

It argues that if Zuma had been afforded a trial before being sentenced, he might have called State Capture Commission Chairman Raymon Zondo to testify as a witness. “It is conceivable that he may have chosen to call the Chairperson as a witness in order to establish and demonstrate to this Court the facts that informed his refusal to appear before the Chairperson (in contradistinction to the Commission itself), thereby conceivably lending a complete defence for his alleged civil contempt of this court’s order to appear before the Chairperson,” the organisation argues.

The court will also consider submissions from the Commission of Inquiry into State Capture, the Helen Suzman Foundation and the Council for the Advancement of the Constitutions (Casac). They have until August 18 to do so.

The court is yet to confirm when it will issue its final ruling in the case. DM