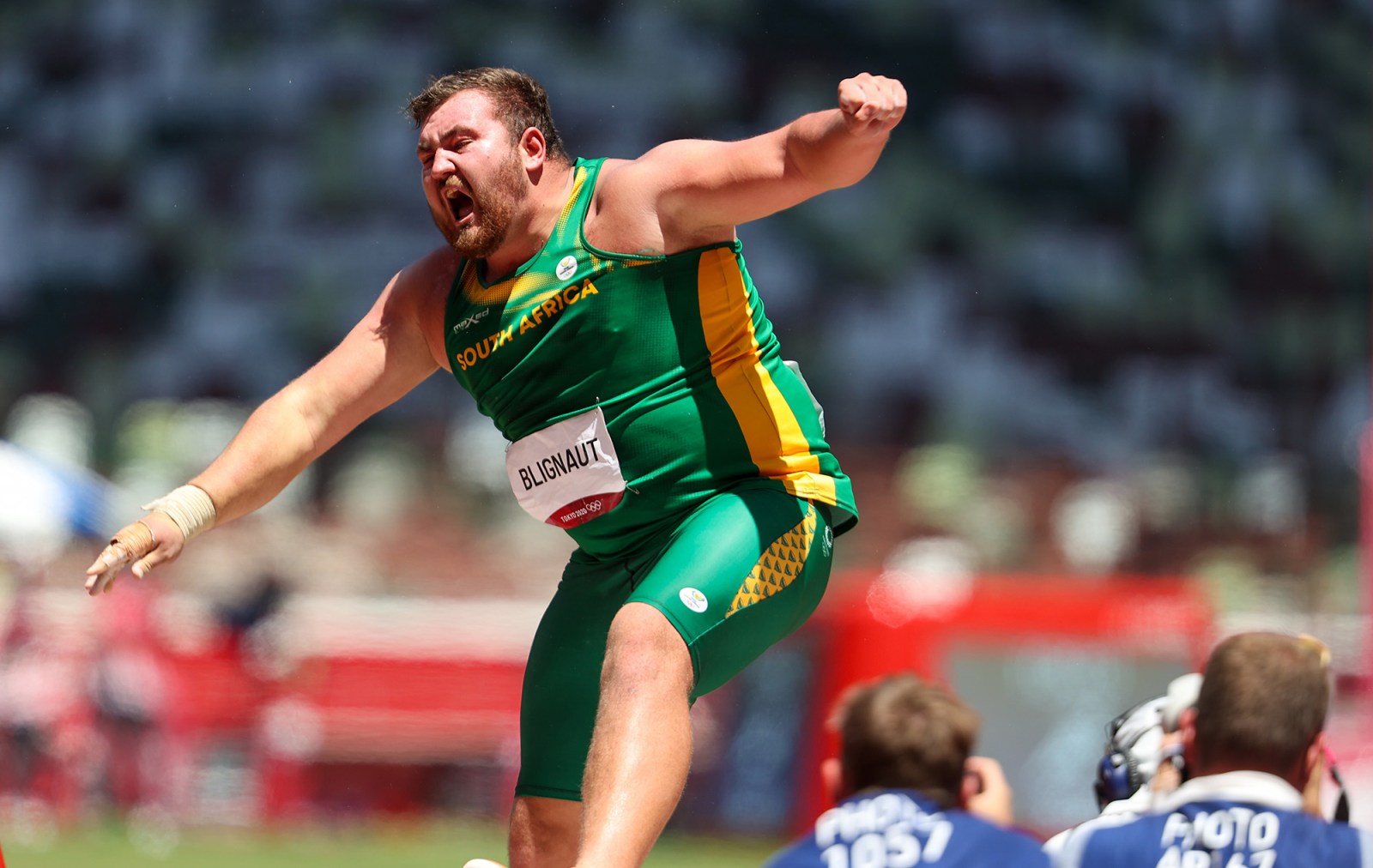 Kyle Blignaut of South Africa in the final of the mens shot put at the Tokyo Olympics on 5 August 2021. (Photo: Roger Sedres/Gallo Images)

Blignaut finished sixth in the men’s shot put final on Thursday, underlining the 21-year-old’s talent and future potential in the power discipline.

You know the much-talked-about cardboard beds in the Olympic Village have delivered on the manufacturers’ promise that they can stand up to the rigours of a 200kg athlete when Kyle Blignaut bounds into the room and reports that he has been sleeping well.

The 21-year-old is 150kg of prime South African beef, a gentle giant if ever there was one. If you see him in a shopping mall you might have a rubber-neck moment and think it’s Springbok prop Frans Malherbe who has just walked past.

“Ja, my friends have said there’s a resemblance,” he says. “I have a few friends who play for the [Johannesburg franchise] Lions and we often get together and have a proper braai. I’m definitely going to have one this Saturday; I land at 1pm and then it’s straight off to a braai to watch the Boks hopefully beat the British & Irish Lions.”

You’d better get used to Blignaut’s name – and the face. The records will show that he finished sixth in the men’s shot put final with a distance of 21.00m at the Tokyo 2020 Games. No real great cause for international headlines in that, but be assured that there will be a different story told in three years when the Paris Games swing into view.

Before then he has the Athletics World Championships to negotiate in 2022, quickly followed by the Commonwealth Games in Birmingham.

It’s worth noting that of the five shot putters who finished in front of him in the blazing Tokyo sunshine, only New Zealander Tomas Walsh will be at the Games. Americans took gold and silver, a Brazilian finished fourth and Amanzimtoti-born Italian Zane Weir was fifth.

“I knew I was the youngest in the final here, born in 1999. During the Rio Games I was still at boarding school, in Grade 11, watching the competition.  These guys were my heroes and it takes a big mental transition to regard them as fellow competitors now and not heroes. Having competed against them in Europe during the season helped me a lot.

“But even during this final there was a lot of banter. I’m still seen as the laaitie, but I was there to show them that I’m not. There is a lot of banter and they try to get a mental advantage, but I’m not a laaitie any more.

“It’s about becoming a man and throwing with the men. My mindset is one of my strengths, I really believe it. And it again came through during the final.

“Before the final I wrote down a few notes on my phone. It was going to be my reaction if I had a disappointing final, you know, you get so many WhatsApps and media asking what went wrong, that I’d made notes. ‘Today was not to be, it was not my day’ was an example… Then I looked at my notes long and hard and hit the delete button. Then I wrote down ‘Thank yous’. I had to get the negative thoughts out of my thought process.

“Today, when my first throw was 20.29m it wasn’t that good. I was ninth at that stage with five throws to come. There might have been a time, not long ago, when I would be happy with that. In fact, my coach and I had at first set our goal at just making the Olympics.

“My second throw was a no throw, so I’m ninth a third of the way through the competition. I sat down and thought to myself, do you want to be sending those ‘today was not to be, it wasn’t my day’ messages, or was it going to be ‘Thank you’ messages.

“My third throw was 21.00m. I had a 20.96m with the one after that. It was the same in World Juniors where I came back with my final throw and won. I can handle pressure.

“In Paris 2024 I will have my family with me, and we can really look forward to it. I can develop a lot in three years. Most of these guys are 29 to 32 years old… hopefully I can be at the forefront of a new era.”

It’s exciting for South Africa to have such a talented, confident and ambitious putter carrying the torch for this next generation. He is still a “baby” in many areas, such as gym work.

He only started “gymming” in 2020, before the Covid-19 pandemic. “I found a nice gym in Sandton and my gym numbers were down. They’ve improved but I’m still an amateur in the gym. When I get my gym numbers up, which I will improve in the off-season, I can improve there and then add mobility to technique to get where it can be.

“There is nothing to stop me putting 22m-plus, 22.50min the next two years. I’m an explosive athlete and I’m big mates with the sprinters and they are usually amazed when they watch me on the track.

“What I do is set up five or six hurdles and jump over them in 30m sprints. I’m competitive and hungry, but also very chilled off the track.”

Off the track, Blignaut is one of those 21-year-olds that you could spend hours around a braai with, probably with a beer in hand. He’ll be shouting for the Boks on Saturday afternoon and you can be sure that when it comes to Paris 2024, the Boks will be shouting for him in the Olympic final. DM