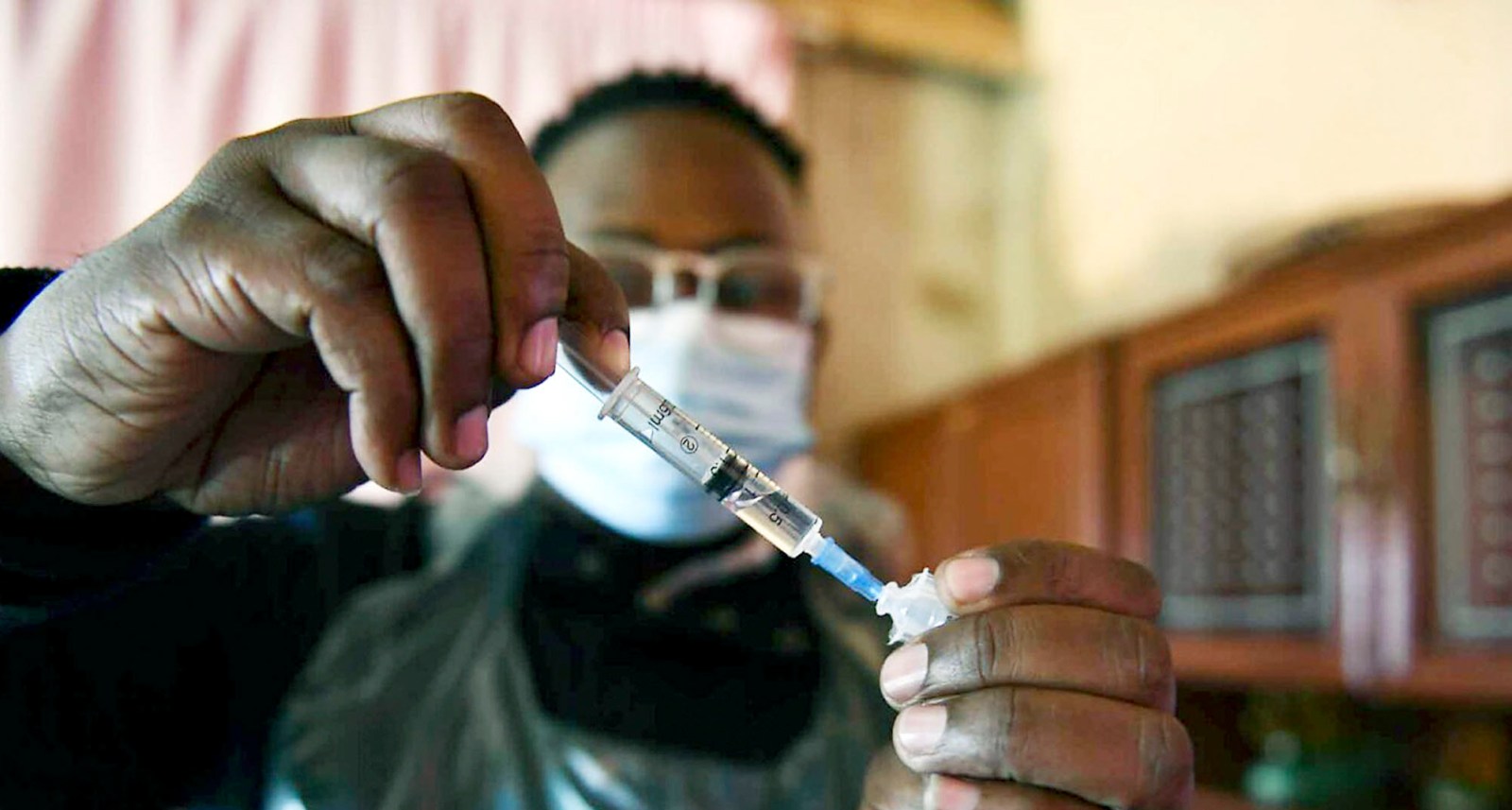 The risk of developing severe or fatal Covid-19 is 30% greater in people living with HIV compared with those who are HIV negative. (Photo: Black Star / Spotlight)

A report by the World Health Organization shows that people living with HIV have a 30% greater chance of developing severe or fatal Covid-19 than those who do not. It argues that vaccines should be prioritised for HIV-positive individuals.

The risk of developing severe or fatal Covid-19 is 30% greater in people living with HIV compared with those who are HIV negative, according to a new report from the World Health Organization (WHO). Comprised of data from 37 countries, including South Africa, the report suggests people living with HIV should be prioritised for vaccination.

“HIV needs to be considered a comorbidity in terms of vaccine access and more attention needs to be paid to it,” says Francois Venter, an infectious diseases professor at the University of the Witwatersrand. “This made sense earlier and makes even more sense with the WHO findings.”

In addition to informing vaccination strategies, the report adds to local data in highlighting the need for sustained HIV service delivery and framing research questions for how to protect those living with HIV.

Analysing data for more than 160,000 people from 37 countries who were hospitalised with confirmed or suspected Covid-19, the WHO identified 12,522 people admitted who were HIV positive. Among this group, nearly all were being treated with antiretroviral drugs and half had other conditions such as high blood pressure, diabetes and obesity.

With adjustments made for age, sex, disease severity and other conditions, the WHO estimated people living with HIV face a 30% increased risk of dying from Covid-19 compared with people without HIV infection. This risk was higher for males living with HIV who were over 65 and had diabetes or hypertension.

“HIV appears to be a significant independent risk factor for severe or critical illness at hospital admission and in-hospital mortality,” the report concluded.

While 95% of the data used by the WHO came from research carried out by South Africa’s National Institute for Communicable Disease (NICD), it found a lower risk of death from Covid-19 than an August 2020 study from the Western Cape. That research found people living with HIV had a two-fold increased risk of dying from Covid-19 whether hospitalised or not.

The difference can be attributed to the WHO’s focus on hospital cases, says Professor Mary-Ann Davis, director of the University of Cape Town’s (UCT) Centre for Infectious Diseases Epidemiology and Research and author of the Western Cape study.

“The risk is lower because if you’re limited to hospitalised cases, the effect of comorbidities and age means the chances of a poor outcome is already very high,” she says.

According to Davis, however, the increased risk identified in both studies is modest. “The community living with HIV has been very concerned about living in fear of Covid-19 more than anyone else,” she says. “What we’re seeing is that studies here and internationally are converging to reveal a pretty modest effect.”

Davies says the fact that the WHO study is heavily based on South African data is not concerning. “It has to do with the fact that we have a very high burden of HIV in South Africa and, compared to other countries that also have a high burden, our capacity for Covid-19 testing and reporting is much greater.”

South Africa has the world’s highest number of people living with HIV, estimated at around 7.9-million in 2020, according to the latest estimates from Thembisa, the leading mathematical model of HIV in South Africa.

The impact of age on Covid-19 outcomes among those living with HIV is significant. “Age is strongly associated with mortality risk with HIV,” Davies says. However, she notes that age, and other comorbidities like diabetes and obesity, play a role in contributing to a higher risk of death for those living with HIV and those who are HIV negative.

Being immunosuppressed is also a factor in driving risk. While the WHO report did not include adherence to antiretroviral therapy (ART) in its findings, Davies says her study and others are providing good evidence that a poor immune response may be linked to poor outcomes.

“Although the risk is there for everyone with HIV, even if they’re on treatment, the risk is greater in people who are immune-suppressed,” she says.

This highlights the need for people living with HIV to access and take their medications regularly and to prevent service disruptions. “We need to continue testing and getting people on treatment and out of immune suppression despite all the challenges of lockdown,” Davies says.

Research shows hard lockdown in 2020 contributed to a decline of more than 46% for both HIV testing and starting on treatment in KwaZulu-Natal, where around 1.7-million people are living with HIV. It also found fewer people collecting prescribed medications.

While services gradually improved as restrictions eased in KwaZulu-Natal, similar data is scarce for the rest of the country. “It’s clear there’s been a disruption, but it’s difficult to know the real impact of that and what’s happening on the ground,” says Dr Richard Lessells, an infectious disease specialist with the Research Innovation and Sequencing Platform (Krisp).

He says that might be solved by improving real-time data sharing across the country. “Look at how openly the Department of Health shares Covid data, yet we don’t have anything like that for HIV even though it’s a pandemic we’re trying to control and eliminate its spread.”

With the hope that robust antiretroviral treatment regimens will mitigate many of the impacts of lockdown disruptions, Lessells says the focus should now shift to protection strategies for people living with HIV.

That includes understanding whether the standard vaccination schedule offers good enough protection or whether there is a benefit from booster shots. Also, whether those starting on antiretroviral treatment should begin treatment before vaccination or do both at the same time.

“These are the research questions we need to now focus on to get the best protection for people living with HIV,” says Lessells, who adds that meanwhile service delivery must be constant.

“The priority is to get as many people as possible with HIV diagnosed and on to effective treatment, and ensure that those on treatment are virally suppressed,” he says. “This has always been our strategy, but we need to intensify our efforts.”

However, experts including Venter say the WHO report and the Western Cape study warrant making HIV a priority in the current vaccination campaign. “Now is the time to start shifting people who are HIV positive to the front of the queues,” he says.

Indeed, a WHO poll shows that 40 out of 100 countries surveyed have prioritised people living with HIV for Covid-19 vaccination.

Acknowledging the successes of the vaccination campaign and its acceleration so far, he says celebrations should be balanced with scrutiny. “Marginalised members of society aren’t being vaccinated and government really needs to pay attention to populations that are being left out,” he says.

With the combined constraints of access and supply, opening vaccination for 18 to 34 years olds from 1 September may be hasty. “It’s great that we can vaccinate 20-year-olds, but there are still people over 60 with comorbidities that need to be vaccinated and that isn’t happening,” Venter says.

For him, the slow overall pace of vaccination is especially worrisome. “That’s probably the single biggest threat to those who are HIV positive, that we’re just not vaccinating fast enough.”

Moving beyond the immediate vaccination programme, Davies says there is scope for blending Covid vaccination services with HIV programmes.

“We may start thinking about integrating vaccinations into HIV services and mopping up people living with HIV who haven’t been vaccinated as they come for care,” she says. DM/MC