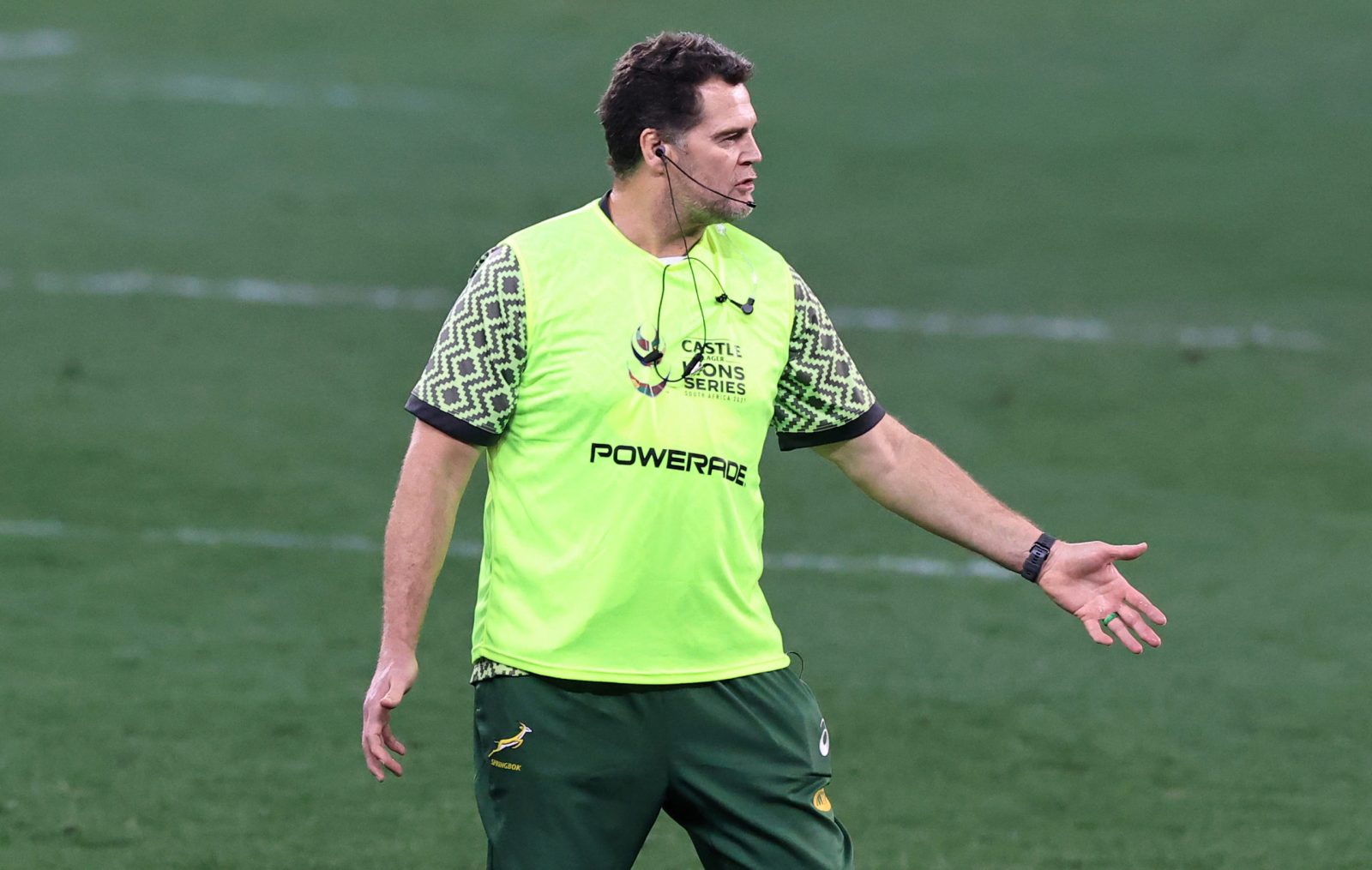 South Africa’s director of rugby, Rassie Erasmus, faces suspension from rugby after being brought up on charges of misconduct by World Rugby on Monday night.

Six days after a video of Rassie Erasmus highlighting in forensic detail the abject performance of match officials in the first Test of the series between the Springboks and British & Irish Lions appeared online, South Africa’s director of rugby has been charged.

World Rugby, the sport’s governing body, has used the coverall clause 18 of its code of conduct to charge Erasmus with misconduct. It’s another firelighter thrown onto this blazing bonfire of a series that will almost certainly not be remembered for rugby.

If this fractious, and frankly poisonous series needed any more venom, it came with charges against Erasmus. World Rugby rapped the Lions over the claws for criticising the appointment of officials, but only charged Erasmus.

Last week Erasmus took the unusual step of releasing/leaking a video into the public domain where he showed, with clear footage, 26 crucial incidents that first Test referee Nic Berry, television match official (TMO) Marius Jonker and their assistants got wrong.

The Boks lost 22-17 and Erasmus was exasperated and angry after a swathe of questionable decisions against the world champions.

This followed the Lions’ management questioning Jonker’s “neutrality” before the first Test because he was South African. That was on top of Lions coach Warren Gatland criticising Erasmus’s role as “water carrier” for the Springboks.

There is no doubt Erasmus stepped into uncharted territory because no senior active rugby administrator (Erasmus is not Bok coach) has so openly criticised and exposed poor officiating. By extension, Erasmus has highlighted the sport’s biggest issue, which World Rugby has failed to address — woeful application of the laws.

Instead of using this as a moment for introspection and learning, World Rugby has predictably decided to throw the book at the easy target — Erasmus.

“World Rugby condemns any public criticism of their [officials] selection, performance or integrity which undermines their role, the well-established and trust-based coach-officials feedback process, and more importantly, the values that are at the heart of the sport,” a statement said.

The 26 glaring mistakes Erasmus highlighted are a far lesser crime than the fact that he exposed them, according to the supposed custodians of the game. “Do not criticise the officials” appears to be World Rugby’s mantra.

“Having conducted a full review of all the available information, World Rugby is concerned that individuals from both teams have commented on the selection and/or performance of match officials,” the statement from World Rugby read.

“However, the extensive and direct nature of the comments made by Rassie Erasmus within a video address, in particular, meets the threshold to be considered a breach of World Rugby Regulation 18 (Misconduct and Code of Conduct) and will now be considered by an independent disciplinary panel.”

SA Rugby, Erasmus’s employers, said they’d noted the action by World Rugby, but would be making no further statements until the case had run its course.

It was instructive that World Rugby declared unhappiness “that both teams have commented on the selection and/or performance of the match officials” because Lions coach Gatland has tried to deny this.

He stated after his side were beaten 27-9 in the second Test that he had not made any comments about Jonker’s neutrality. It was all semantics. He was not directly quoted in at least four major UK publications that reported his “fury” at Jonker’s appointment.

World Rugby clearly wasn’t buying the Lions’ weak excuse either. The Lions’ unhappiness at Jonker’s appointment (a World Rugby decision) had obviously been communicated to selected media outlets without direct quotes from Gatland. At least World Rugby had the sense to see through that sham.

But Erasmus was a much easier target to nail because he went on record and in front of a camera and was openly and vocally critical. It has to be said, he knew the possible consequences of his actions, which he accepted.

“World Rugby has reminded the management of both teams of the importance of this area and their obligations regarding the values of the sport,” World Rugby sanctimoniously stated.

“In order to protect the integrity of the sport and its values, World Rugby will also undertake a review of its Code of Conduct relating to incidents of this nature with a view to strengthening scope, rules and sanctions.

“As with any Test series, South Africa versus the British & Irish Lions is a showcase of rugby that generates great excitement and interest, even more so at this challenging time for sport and society.

“It is an opportunity for both teams and their management to set a positive example and concentrate on the spectacle and a wonderful example of rugby and its values at their best.”

A judicial committee will be appointed shortly and a date for the hearing set. It is unlikely to be concluded before Saturday’s third and deciding Test.

If Erasmus is found guilty there are a wide range of sanctions that could be imposed by World Rugby, ranging from a warning to his suspension from coaching or administration roles in the game. DM