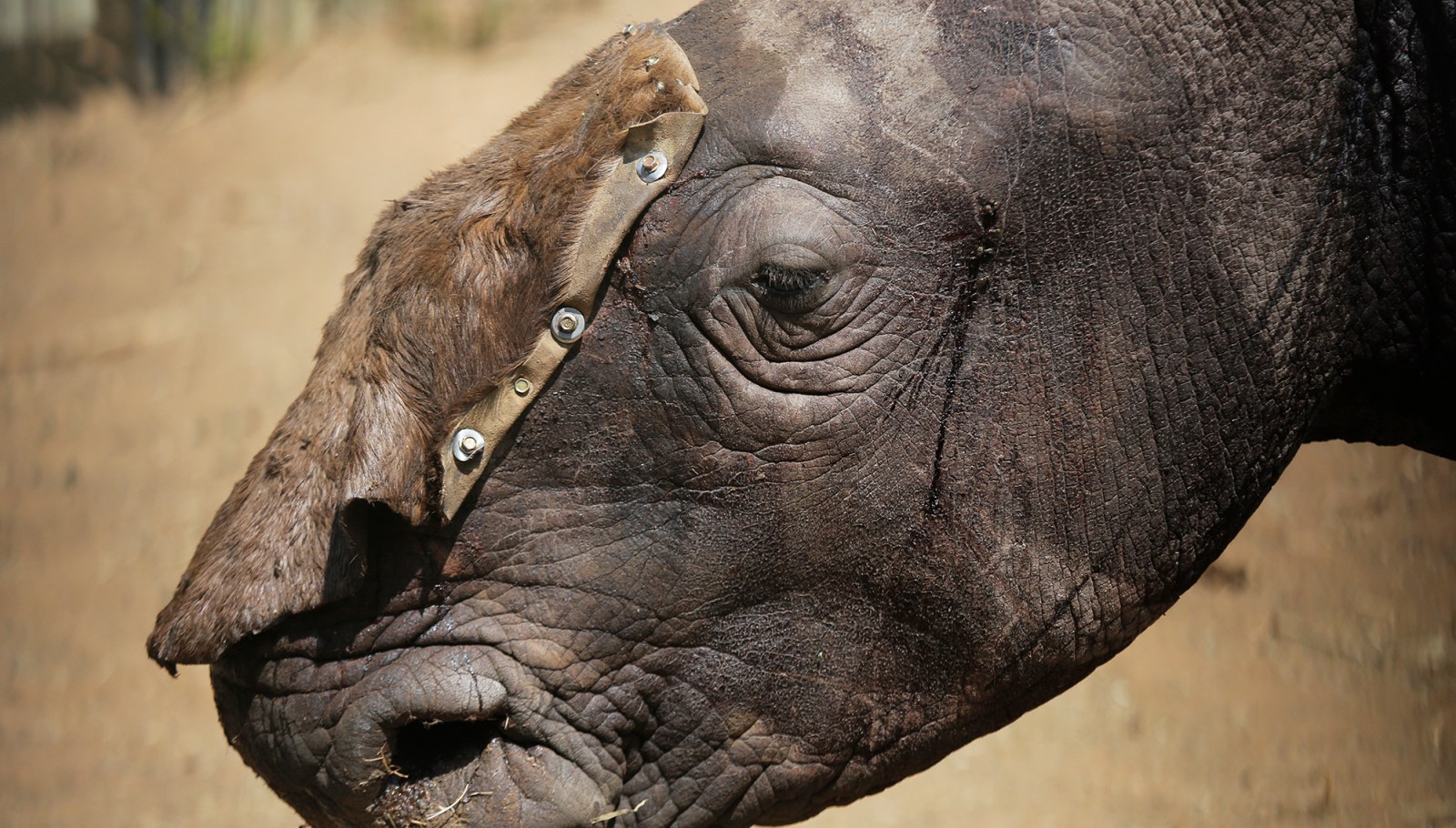 Wasinda, a three-year-old white rhino at a private game farm in the Free State, with a hide covering open wounds before undergoing treatment by vets. (Photo: EPA-EFE / Kim Ludbrook)

The number of rhinos killed to feed the horn trade in South Africa rose in the first six months of 2021 compared with the same period in 2020, the latest data shows. It also highlights the increased targeting of rhinos on private reserves where more than half of the national herd resides.

The Department of Environment, Forestry and Fisheries (DEFF) released the data on Saturday, 31 July — World Ranger Day — a day dedicated to the brave men and women who protect wildlife in the field. The cause is noble, but many battles are sadly lost.

The data showed that in the first six months of this year, 249 rhinos were killed for their horns compared to 166 in the same period last year, when the initial hard lockdown to contain the Covid-19 pandemic clearly curtailed the killing. That’s a 50% increase, which suggests that precious metals and minerals are not the only “commodity exports” on the rise. Rhino poaching has not yet reached pre-Covid levels as 318 of the animals were slain for their horns between January and June 2019. But that may be only a matter of time.

The data also shows that privately owned rhinos have been increasingly targeted this year.

“Noticeable increased poacher pressure has been experienced in Limpopo, Mpumalanga and the Free State provinces. The department is also monitoring the increased pressure seen on private rhino reserves and collaborating closely with the private sector which continues to play a significant role in rhino protection. During the same reporting period over the last three years, losses in private parks constituted 15% of the total reported loss in 2019, 9% in 2020 and 30% so far in 2021,” DEFF said in a statement.

According to the estimates of the Private Rhino Owners Association (PROA), at least 55% of South Africa’s national rhino herd of around 14,000 to 15,000 is in private hands. The data highlights that private owners have been doing a better job of protecting their animals than the government in state parks such as the Kruger. If you own 55% of the animals and 30% of the toll is from your herd, you are clearly losing fewer of the critters to poachers.

Pelham Jones, the chairman of PROA, told Our Burning Planet that private sector operators have seen revenue that could have been spent on security drop because of the pandemic’s impact on foreign tourism. Many generate their income from game viewing or hunting and rely on foreign tourists with deep pockets of hard currency. Another source of income, animal auctions, has also been impacted.

“This shows that the poaching syndicates are turning their attention to private reserves. We find this latest trend incredibly alarming and we are in a greater level of stress than ever before because our members don’t have money to spend on additional security. The dual impact of Covid-19 and the lack of foreign tourists has hit us hard,” Jones said.

A study published in the peer-reviewed journal Conservation Letters last year found that 28% of South Africa’s private rhino owners are disinvesting from the species. This was partly in response to surging security costs, and one of the trends is that fewer people own increasing numbers of rhinos. This trend could now be accelerated.

The latest poaching data also comes against the backdrop of a government policy drive to end the intensive breeding of lions — which is another issue and has wide support, including from the hunting industry — and rhinos, which has been applauded by some conservationists and animal welfare organisations, but has raised hackles among private owners.

“There are no longer any incentives to own rhino,” Jones said. The vexed issue of legalising the rhino horn trade also lurks in the background here. The accelerant for the poaching onslaught is red-hot demand for rhino horn for its alleged (and scientifically bogus) medicinal uses in newly affluent Asian economies such as Vietnam.

Global trade in rhino horn has been banned since the late 1970s under CITES, an international agreement among governments to regulate the trade in wild animal and plant specimens to ensure their survival. The anti-trade camp maintains that legalisation of the rhino horn trade would just add fuel to the flames of the poaching fire. The pro-trade camp holds that it would squelch the fire by feeding the market with a legal product, thereby robbing the flame of its oxygen. South Africa has made it clear that it will not push for legalisation at the next big CITES meeting in Costa Rica in 2022. All sides in this polarising debate have legitimate concerns.

But much of the private rhino sector may feel it is being burnt at the moment, and the fact of the matter is that the sector has done a lot to build up the national herd of rhinos in South Africa, and hence global numbers.

The private sector may be a victim of its own success. Data that emerged earlier this year suggested that the Kruger rhino population may have fallen by as much as 70% over the past decade because of the unrelenting pressure of poaching.

Kruger of course is huge — roughly the size of Israel — and fewer animals mean longer times searching for them over a massive territory. But if more than half of your target species is on far smaller private reserves, you might make a profitable pivot in that direction. Especially if private owners are increasingly short of the cash needed to pay for security measures.

Policy, politics, poaching and privatisation are all playing out here in interesting and concerning ways. DM/OBP