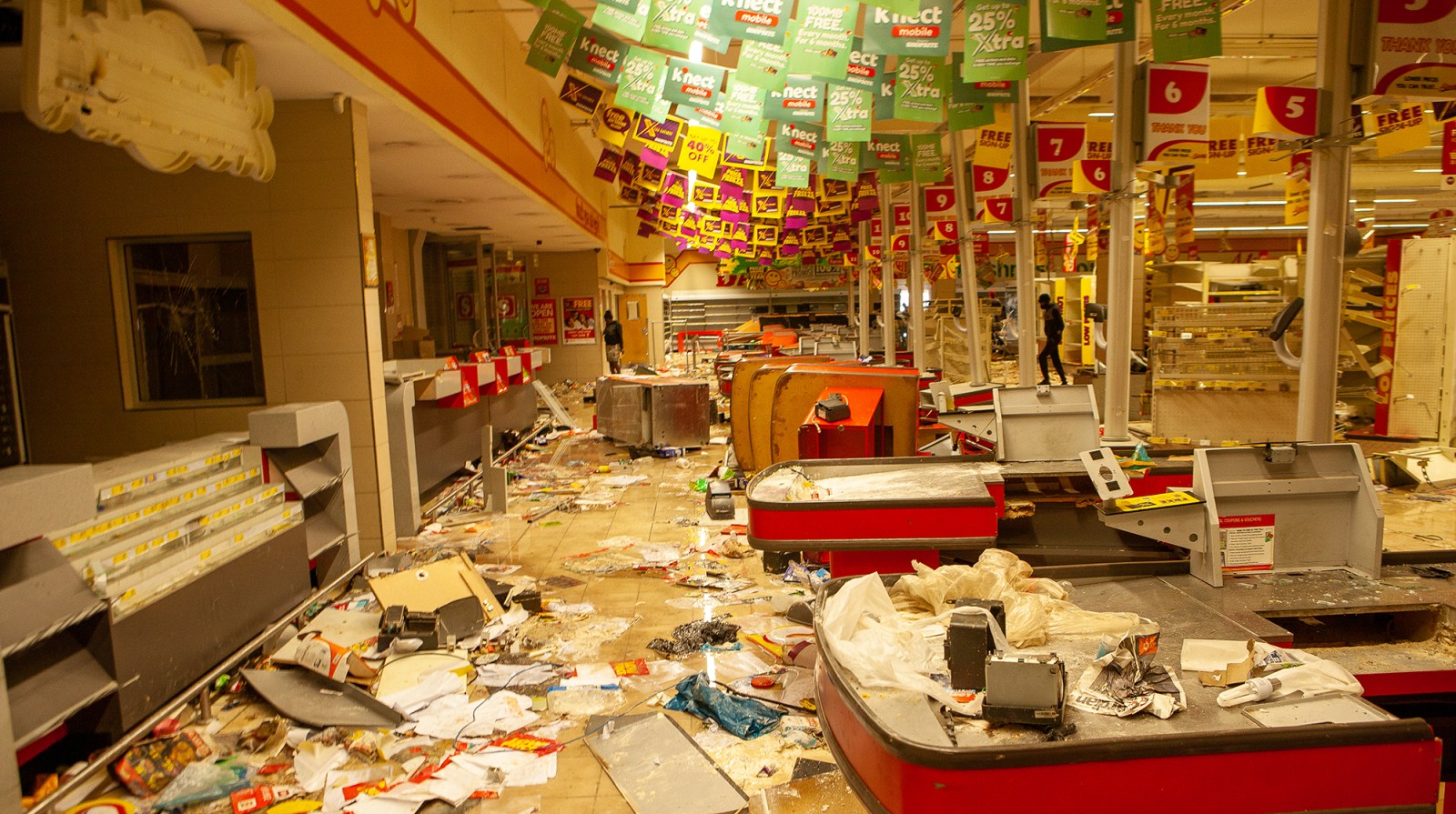 The aftermath of protests and looting at Ndofaya Mall on 13 July 2021 in Soweto, Johannesburg. (Photo: Gallo Images / Papi Morake)

A snap survey of South Africans conducted countrywide after the spate of looting which rocked the nation in the wake of the jailing of former president Jacob Zuma shows all races believed that the government’s response was too slow.

The survey, conducted by The Brenthurst Foundation in association with Sabi Strategy, illustrates that more South Africans are fearful of the future than hopeful, with black South Africans the most fearful. Despair also outscored feeling “positive”, which came in lowest by some stretch. 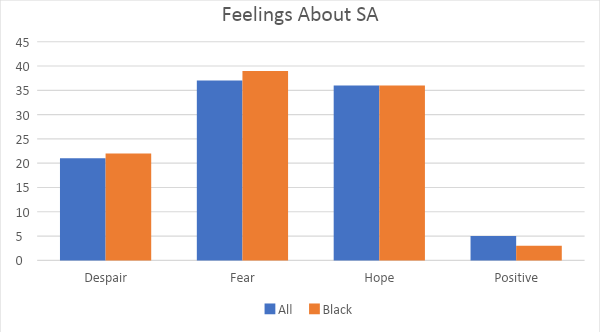 Conducted telephonically among 1,605 respondents, the survey took place during the week of 21 July, and is weighted according to national statistics on gender, age, race and province.

A majority of respondents in KZN (64%) and Gauteng (76%), however, believed the government’s response to the unrest and looting was either too slow or ineffective.

Perceptions of which party responded better to the events largely mirror demographic voting patterns, with the ANC rated as the best among black South Africans (37%), and the DA as most effective among coloureds, Indians and whites (28%, 20% and 31% respectively). 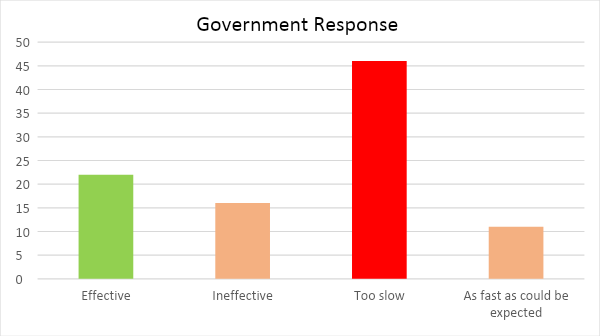 Support for former Zuma and the Economic Freedom Fighters’ Julius Malema appeared to have plummeted, while support for President Cyril Ramaphosa was highest, followed by support for the DA’s John Steenhuisen.

Ramaphosa logged positive scores among every racial group, including 60% favourability among whites, and 58% among black South Africans, scoring 57% favourability overall among all race groups. He was familiar to all those polled.

Zuma and Malema were rated negatively by all race groups, scoring 49% and 50% unfavourability respectively among South Africans, suggesting very low support for the radical redistributive policies and corruption with which they have been associated. This may also explain Ramaphosa’s positive score. Zuma and Malema’s support bottomed among whites at a 69% and 91% unfavourability rating.

Steenhuisen scored overwhelmingly positively among whites (55% favourability) and to a lesser extent among Indians and coloureds, but had a high (32% unfavourable to 8% favourable) negative rating amongst black South Africans. His biggest challenge seems to be that many (43%) of those polled were unfamiliar with him. 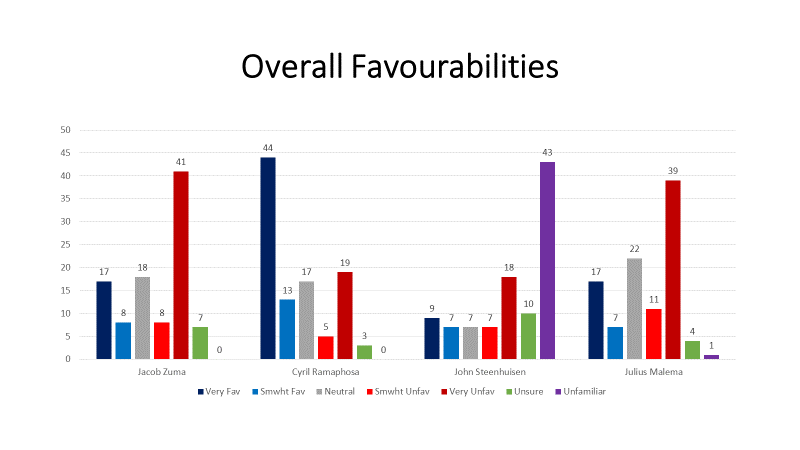 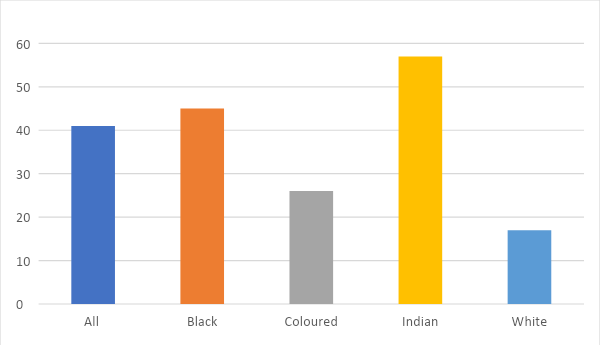 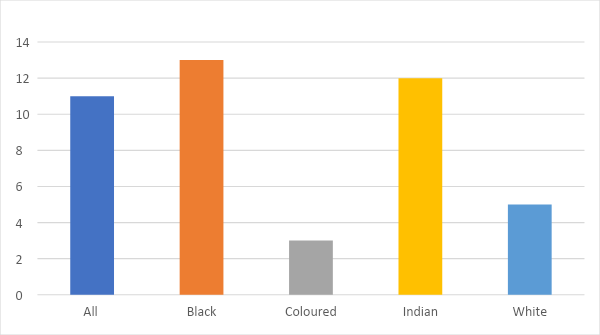 Perhaps the most revealing issue, however, is in the survey of voting patterns.

Excluding those who did not vote, with 70% of black South Africans owning up in the poll as having vote for the ANC in 2019, and 64% of whites, 43% of Indians and 57% of coloureds for the DA, the country would seem to be, more than a quarter century after 1994, racially polarised, though the multiracial support for Ramaphosa would seem to indicate this is somewhat dissipating, especially when compared to his predecessor. DM