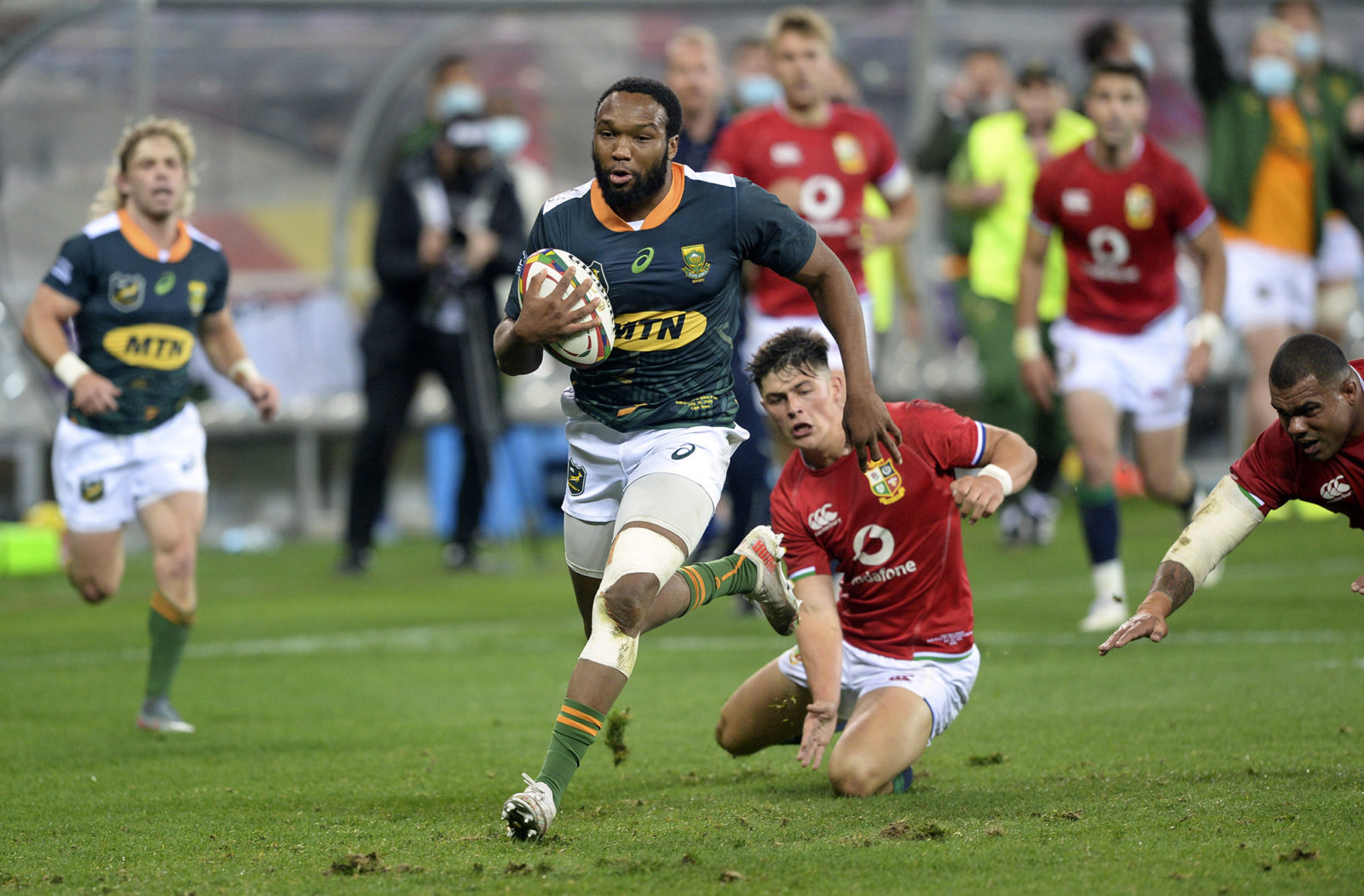 As former referees and myriad experts poured over the controversial decisions that shaped the first Test between the Springboks and British & Irish Lions, the greater problem afflicting the game became painfully clear.

Rugby relies on outdated and limited methods of officiating. It’s little wonder that big decisions are picked apart on a weekly basis, and that the integrity of the game itself is questioned regularly.

So little definitive evidence is available to the officials, and to the fans for that matter. So much is open to interpretation.

Rugby is yet to join other codes in the pursuit of accuracy and truth. Too much faith is placed in the referee, who cannot be expected to see every transgression on the pitch. While the Television Match Official (TMO) is presented as an all-powerful authority, he is not – as was witnessed in the first Test between the Boks and the British & Irish Lions at the Cape Town Stadium – as omniscient as most would believe.

Fans are losing faith in the officials. What’s more, the unacceptable amount of time that is being taken to reach “conclusive” decisions via the TMO is disrupting the flow of the game and is driving fans away from the sport.

Rugby is ripe for revolution

Dugald MacDonald, one of the founders of Sportable, believes that ball-tracking technology would empower officials to make quick and accurate calls. Just as HawkEye has revolutionised cricket and tennis, Sportable may ensure that rugby – as a sport and as an engaging commercial product – realises its full potential.

MacDonald comes from rugby stock. His father Dugald MacDonald Snr played No 8 for the Boks against the Lions in 1974, while two of his uncles represented Scotland. After growing up in South Africa, MacDonald moved to England to study at Oxford and eventually went into corporate financing in the mining industry.

One day, his childhood friend Pete Husemeyer, who had moved to the UK around the same time as MacDonald to study nuclear engineering at Cambridge, called to talk about an idea.

“Pete was working for Nasa at the time, but was still very passionate about sport,” MacDonald tells DM168. “He was watching an ice hockey game and was fascinated by the collisions. He was wondering why there wasn’t any data about those collisions available to the viewer.

“We’d seen how data was used in cricket and tennis, and how HawkEye had changed those sports for the better. Later, when we considered rugby, we found it strange that the info coming from the commentators and experts was so limited.

“We did some research and discovered that contact sports such as rugby have a problem with the collection of data. Part of it is down to the shape of the ball. HawkEye loves a spherical ball, but it struggles to pick up an oval one. Filling this ball-tracking hole would, we believed, enable the sport to realise its potential.”

In 2016, the South African pair founded Sportable and set out to change the flow of the game as well as the way it is consumed by fans.

The conductor of the orchestra

Sportable built a portable, scalable data collection system that leverages the power of the ball. As MacDonald puts it, “the ball is the conductor of the orchestra”.

The company partnered with the biggest ball manufacturers in the world to integrate their tracking chips. These Smart Balls connect to the rest of the wearables to provide unique insights.

At this stage, the technology is used to provide fans watching major tournaments such as the Six Nations and the National Rugby League (NRL) with a more detailed explanation about the contest unfolding on their screens. England, Leicester Tigers and Saracens, however, are using the company’s unique data-capturing tools to inform their training and preparation.

In the near future, referees will harness these tools to make more accurate and informed decisions.

Officials in the NRL and Varsity Cup will have access to the forward-pass detection tool in the coming months.

Rugby legends such as Francois Pienaar and Michael Lynagh as well as a top referee Wayne Barnes have thrown their weight behind the initiative.

Last year, England coach Eddie Jones suggested that the game would benefit from the time-saving technology.

“We don’t have strong leadership in World Rugby at the moment.

“The game needs to become a little more continuous because it’s evolving now to be a game for big, powerful athletes and the game has always been a charter for different sized athletes. That’s a worrying thing for me.”

Sportable provided DM168 with its analysis of the first Test between the Boks and Lions. According to the group’s report, a total of five minutes and 13 seconds was wasted on TMO referrals.

Much has been made of these incidents in the wake of the first Test. South African director of rugby Rassie Erasmus has come in for criticism after highlighting a number of transgressions and inconsistencies through social media. Again, this points to a broader problem regarding officiating methods and frameworks.

Bok fullback Willie le Roux crossed the tryline in the 46th minute. Referee Nic Berry ruled that the on-field decision was a try, which – according to protocols – placed an onus on TMO Marius Jonker to provide a valid reason for overturning the decision.

Jonker checked the transfer from Damian de Allende to Lukhanyo Am in the build-up, and ruled it a fair pass. He then ruled that Am was marginally behind Le Roux before kicking the ball, and that Le Roux was ultimately offside. The try was disallowed, and the fullback was penalised for being in front of the kicker.

After the match, numerous pundits in both hemispheres analysed these decisions and declared that Jonker had got both calls wrong. Veteran Test referee Nigel Owens pointed out that the pass from De Allende to Am was forward. The try should have been disallowed, but not for the reason supplied by the TMO.

While Jonker had access to various camera angles, he was still forced to trust his judgement rather than any concrete evidence. Perhaps this is why he did not rule De Allende’s pass forward, because he couldn’t make a clear decision – and overturn Berry’s initial call – based on the information at his disposal.

As MacDonald points out, spotting a forward pass – especially those that are close to the gain line – is easier said than done. Most passes travel forward. According to the laws, the ball cannot travel forward faster than the player who made the pass.

Asking referees to make a definitive decision when they are not directly in line with the play is a tall order. What’s more, officials are wary of checking every marginal pass as the resultant stoppages may compromise the flow of the game.

MacDonald insists that Sportable’s balltracking technology allows for the question of relative motion to be investigated quickly and accurately, giving the referee the help they need to make the right decision.

Similarly, the technology can determine whether Le Roux was in front of the kicker or not. Multiple camera angles could not provide a definitive answer because the angles were never in a direct line with play.

That offside decision would not have been made, of course, if the preceding pass from De Allende to Am was ruled forward in the first place. In that event, the Lions would have been awarded a scrum – and as many as three minutes and 23 seconds would not have been wasted on a review.

All the stoppages add up. In the 71st minute, officials wasted a further one minute and 51 seconds deliberating over a score by De Allende.

MacDonald explains how the technology used by Sportable would have avoided an unnecessarily long review.

The Smart Ball provides real-time feedback on the flight state of the ball. Where forward-pass detection relies on utilising speed data, knock-ons or touches to the ball in the air use spin-rate to identify a change to the ball’s flight.

In this case, the ball would have automatically shown whether Cheslin Kolbe knocked-on, in the lead-up to De Allende’s try.

Sportable’s technology could be utilised in the same way Snick-O is used in cricket. The TMO can roll forward and backwards to show a change to spin or speed. This would still require a TMO review, but would greatly speed up the decision-making process.

MacDonald confirms that the technology will not replace referees in future. On the contrary, the successful implementation of a more accurate and time-saving technology will require a significant buy-in from the officials.

“We’ve been working closely with the relevant parties about the implementation of this technology,” says McDonald. “We’d like to see referees working with it to get the right decision and to speed up the game.” DM168