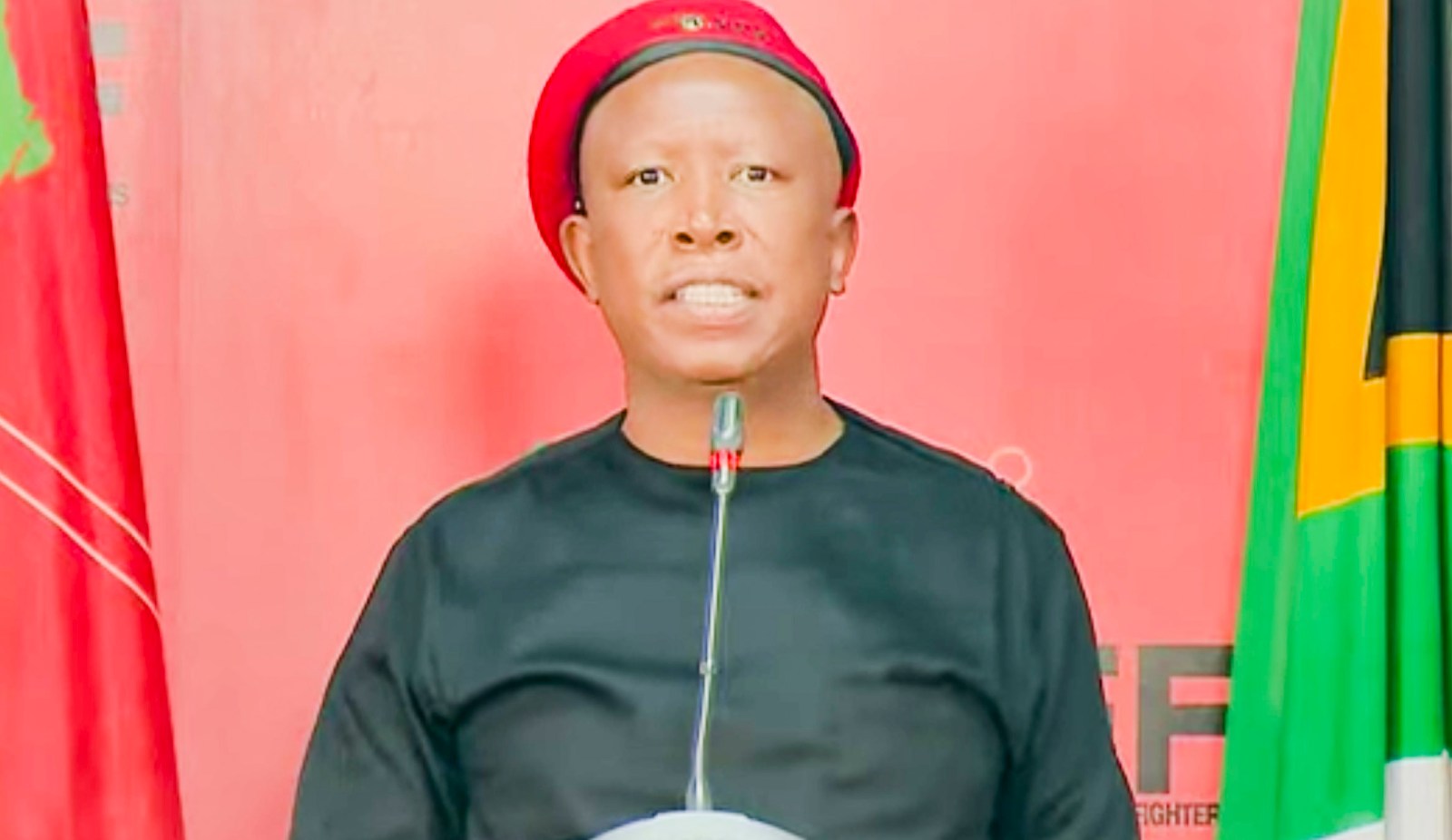 Eight years since its founding, the Economic Freedom Fighters (EFF) has grown into a political party able to conduct a virtual anniversary rally on a zero-rated data stream from its website on Monday.

Party leader Julius Malema used the occasion to challenge President Cyril Ramaphosa to withdraw his army from the looting hotspots and visit those areas himself to turn the toxic tide. “We want to challenge Ramaphosa to remove the soldiers from the streets and confront the people of South Africa,” he said.

“He must stop hiding behind the uniform of the soldiers and confront the reality that our people are confronted with on a daily basis. If you are a man, Ramaphosa, and you know you have been elected legitimately by the people of South Africa who love you, and that you did not buy the presidency through the money of the white monopoly capital, then go and speak to the masses on the ground,” he said.

That is, incidentally, exactly what Ramaphosa did as the worst of the looting subsided, when he visited the eThekwini Metro to address patriotic clean-up teams. Fortunately for Malema, he didn’t have to conduct this birthday rally next to some wreck of a looted mall or address edgy residents, because the EFF miraculously complied with Covid-19 lockdown regulations again after hosting a few super-spreader rallies and marches which epidemiologists said could have contributed to the high numbers of infections and deaths during the surge of the pandemic’s third wave.

In 2013, for example, the party held its founding rally in Marikana where it had real street-cred among the mining community, and when the area was a no-go zone for ANC leaders after the fatal shooting of striking mineworkers the year before.

There are also Malema’s mind-altering half-truths and contradictions which he delivers like a seer:

“Some of you even call us prophets,” Malema told his virtual audience. “We are not prophets, we use proper tools of analysis.”

He produced a snippet from the EFF’s founding manifesto:

“Any form of generalised uprising will be harshly suppressed by the state machinery in order to prevent it from escalating to a level where a sitting government can be toppled,” he read.

While it could still happen in future, what has happened at many malls in KwaZulu-Natal and Gauteng was not a “generalised uprising” and state machinery didn’t harshly suppress it.

Instead, vigilante citizen groups defended themselves while police (state machinery, according to Malema) were overrun and/or looked on. Soldiers were eventually sent in with orders not to shoot. More than 300 deaths resulted from the violence, but analysis on this grim figure is still lacking and there’s no clear evidence yet that a significant number of these died at the hands of “state machinery”. If this was the case, more information on it would have surfaced by now.

Perhaps the man who calls himself the commander-in-chief of an army of economic freedom fighters is just offended by the sight of soldiers he can’t order around.

“Soldiers were set on the streets of South Africa to threaten [those who tried to protest against this government] from exercising their democratic right,” just as the EFF had predicted, Malema went on. While he condemned the “looting and the destruction of property” (he implied leaders should have used their power of persuasion to make this stop), he said the EFF sided with “the people who were engaged in the activities of looting and fighting to provide food for their children”.

While he said what happened two weeks ago was not an insurrection or attempted coup, he warned that “the state will intensify their attack on defenceless people who are not toppling government through any undemocratic method but through protest and showing their dissatisfaction against this kleptocratic government of the ANC”.

Malema also addressed possible misunderstandings on whether he wanted to incite further looting at the height of the unrest:

“No soldiers on our streets! Otherwise, we are joining. All fighters must be ready… they won’t kill us all,” read his tweet on Monday, 12 July. It amounted to nothing, and that’s exactly the way he intended it, Malema said.

Whatever was supposed to have happened, there is still a greater likelihood of Malema successfully fomenting a generalised uprising than winning a majority of the votes in the upcoming local government elections, even if these are postponed to February 2022.

Even though the 1.8 million votes in the 2019 general election was an impressive feat for this young upstart party, the 10.7% of the electorate that this represents is still a lot smaller than the big dreams of its leader.

Eight EFF years later, Malema’s a pleaser and a populist, and the contradictions in his statements represent a desire to be all things to all people, and so to become a kingmaker ready to exploit the gap available for strongmen in South Africa’s immature coalition politics. Only time will prove if the people of South Africa will take his bait in greater numbers. DM