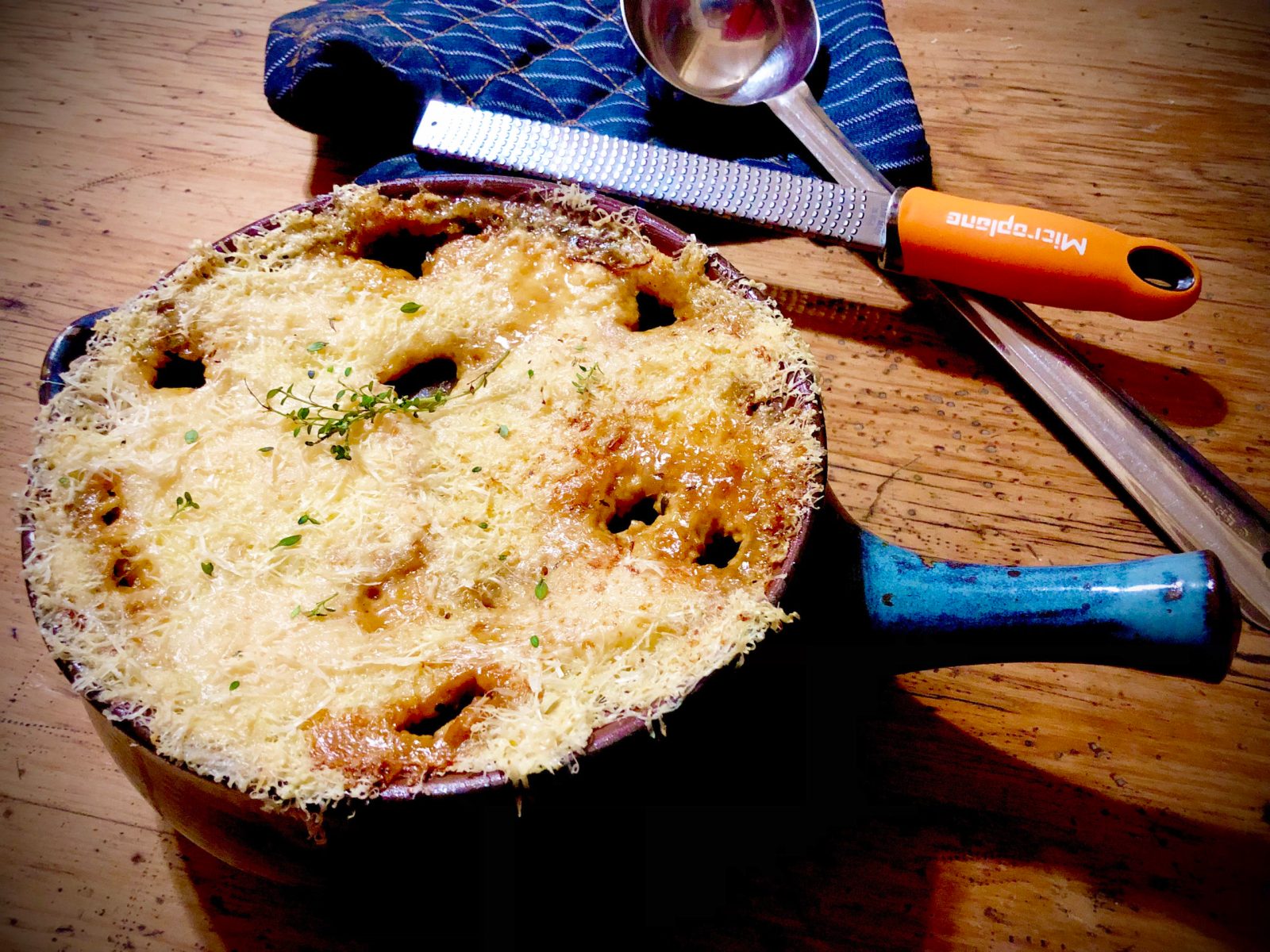 Brought to us from the old peasant culture of La France, French Onion Soup is one of the grandest of humble dishes. It’s one of the best examples in any cuisine of greatness out of simplicity.

Look at in the picture. It doesn’t even look like a soup. That’s how it’s intended to be: hidden delight that rewards you when you break through the cheesy, bready crust. Seconds please.

French onion soup is the ultimate peasant dish, a term not intended to denigrate the poor people for whom it was once a staple meal but to identify the dish as a part of that cuisine. Peasant cuisine, that bastion of so many things culinary and worthwhile; a repository of dishes born of poverty that became desirable and sought-after by the finest palates. One of food’s common denominators.

The soup is all about creating a beautiful dish out of next to nothing; about producing mountains of flavour from the most modest of ingredients: the humble onion. It’s also all about the caramelising of the onions. The extraction, through time, gentle heat and patience, of every iota of flavour the onion could possibly give you. Everything stems from there.

Its other core flavours are beef stock and cheese, though the latter is only the finishing touch, a mound of it on top of croutons (slices of toasted baguette) which is then finished in the oven or under the grill for the cheese to melt into the bread and form a cheesy, insanely desirable crust, below which is the invisible lake of intensely flavoured soup, packed with onions. Or finished under a salamander (like, who has a salamander these days outside of a restaurant?).

In Paris it is called Soupe l’oignon a là Parisienne or Soupe l’oignon gratinée; so we could call it gratinated French onion soup if we wanted to be pedantic, but we don’t, so we won’t.

Though there have been onion soups in many cuisines since antiquity, and yes, the Romans had an onion soup too, it is the French onion soup that is best known, and has been particularly popular in the last 60 or so years after its heyday as a Parisian street food for the masses in its modern 18-century origins.

A couple of side issues. French onion soup doesn’t necessarily call for thyme or garlic, though either/or are often used. I use both. Thyme and onions are a marriage made in soup heaven, and garlic, being another allium, is never going to be out of place and can only add depth of flavour, Leeks, too, are not required in a traditional recipe for it, but it’s yet another allium and certainly adds something.

A spoonful of sugar? Some recipes call for it, others don’t. The caramelisation of onions releases their own sugars which is why they caramelise given plenty of time and patience. But with the great quantity of onion I used (they were massive ones), I felt that a little sugar (caramel sugar in my case though most recipes would call for brown) was hardly going to inhibit the caramelisation process.

The cheese in its Parisian era would have been Comté, from the Franche-Comté province bordering Switzerland, though today it’s more common to use Gruyère or another Swiss cheese such as Fontina. You’ll see that in my recipe here I use Mozzarella, which is also sometimes used in modern versions. This is not to fly in the face of the tradition; I just live in a town where the choice of cheeses is very limited. Get Gruyère or Fontina if you can. Parmesan is frequently used these days in addition to the main choice of cheese. It’s honestly not essential that you include it; stick to just one if you prefer, Parmesan being such an unflinchingly commanding cheese. I did use it since I was using Mozzarella; if it had been Gruyère I may have left the Parmesan out. You choose.

I have in the past often roasted whole or halved onions with thyme, for three hours or more to extract maximum flavour from them even before chopping up the roasted onions and then caramelising them further in a pan on the stove. You can of course do this, but to caramelise thinly sliced onions from scratch in a deep, heavy frying pan as I did this time will give them all the flavour they need providing that you do give them as much time as you can; two hours at a minimum, or even more as long as you are careful not to take them too far inadvertently and risk giving them a burnt or “caught” flavour.

How many would this recipe feed? You might think four, you honestly might, but once two of us had each had a generous bowl of it (as our supper, not a starter) there wasn’t a whole lot left. It was a chilly Sunday night, the kind of night when soup becomes a most desirable and moreish thing. Anyway, a dish as proud as French Onion Soup deserves to be the star of the supper show. So, serves four…? Not if you fancy seconds. I know I did.

4 thyme sprigs, the leaves picked off

300 g Mozzarella (unless you can source Gruyère, which is the best choice, or Fontina), grated

Slices of toasted baguette, enough to cover the top of the dish you’ll be using when the cooked soup goes into the oven

Sauté the onions for two hours on a very low heat, stirring occasionally. After the first hour add the leeks, garlic and thyme and continue cooking. Also sprinkle the sugar over now if using, but if it is caramelising beautifully after an hour you might not want to. Return to the pan every few minutes; if you leave it untended for too long the onion is likely to burn and the flavour be ruined.

Melt the butter in a heavy pan large enough to hold all the onions plus the stock. Off the heat, whisk in the flour or cornflour. It should be a slurry more than the kind of roux you’d use for a béchamel, what is known as a “soft roux”.

Tip the caramelised chopped onions into this roux on a low heat while stirring or whisking. Add the chicken stock and beef stock and stir very well to combine. Season with salt and white pepper to taste.

If matters regarding alcohol have normalised by the time you make the soup, add a dash of Cognac and Sherry and let that simmer into it for a while.

Pour the soup into an ovenproof crock or casserole. Lightly toast slices of baguette and place them over the top to cover the soup entirely. Grate a generous amount of the cheese you’re using and pile it over the top so that you can’t see any of the baguette beneath. Don’t be shy.

Put it in a preheated oven at 200℃ for an hour or until the cheeses have melted into the bread and turned golden. Garnish with picked thyme leaves. DM/TGIFood