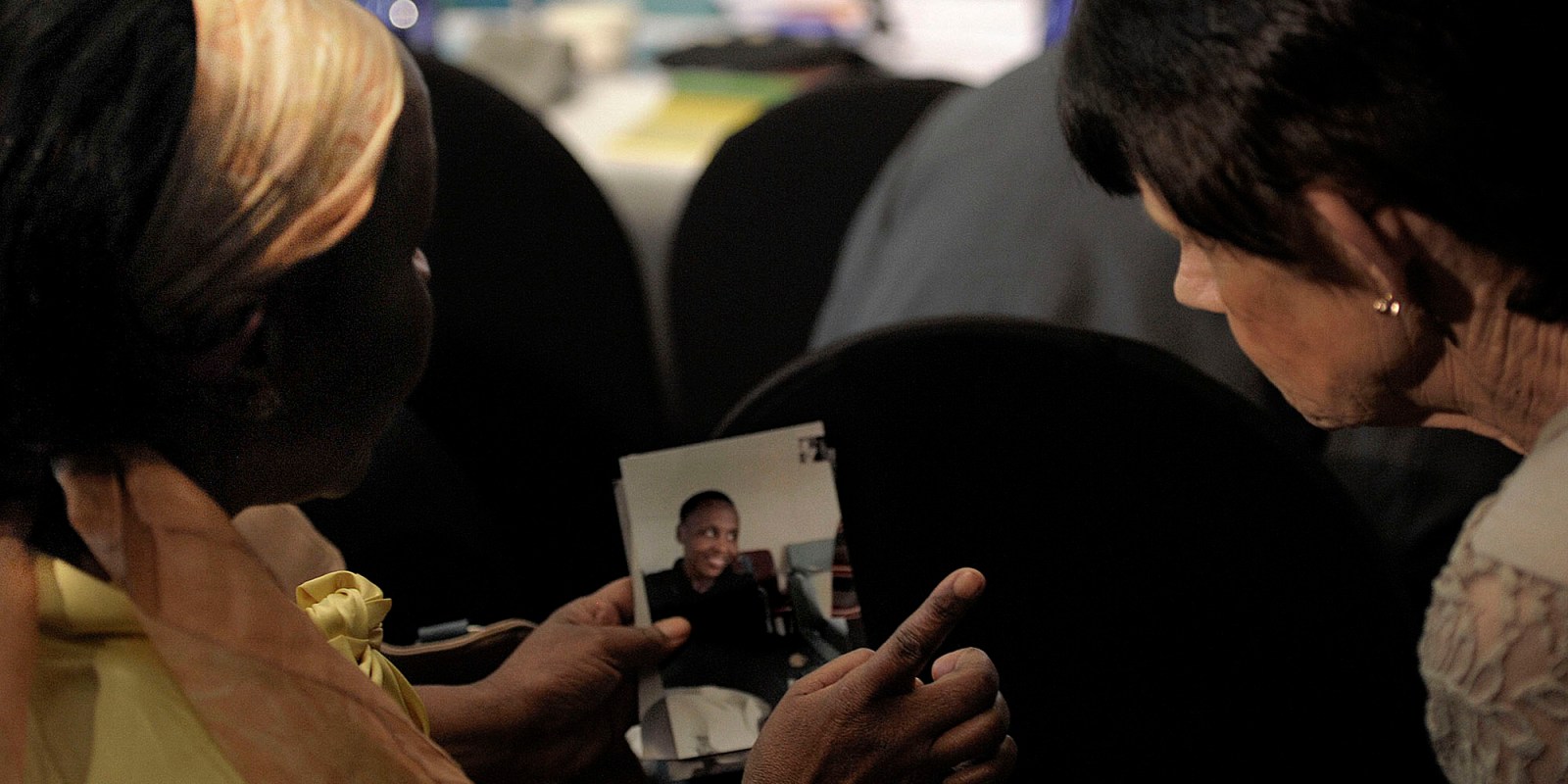 Family members at the arbitration hearings showing each other photos of their deceased loved ones. (Photo: Joyrene Kramer)

Although individual families of the mental healthcare users who died after they were discharged from Life Esidimeni in 2016 have been compensated for the violation of their constitutional rights, the actors responsible for the deaths, suffering and torture of the mental healthcare patients have yet to be held criminally accountable. But that could change after a formal judicial inquest into the deaths starts at the Pretoria High Court on 19 July 2021.

As a result of the unlawful and uncaring actions of the Gauteng Department of Health, 144 mental healthcare users died in conditions which the Former Deputy Chief Justice Dikgang Moseneke described as “cruel, inhuman and degrading”. Many vulnerable mental healthcare users suffered starvation, dehydration, neglect, torture, and severe violations of their human rights.

In 2015, then Gauteng MEC for Health, Qedani Mahlangu, ended a longstanding contract between the Gauteng Department of Health and Life Esidimeni and announced plans to move patients to other psychiatric hospitals and NGOs. This was done, according to the department, to implement and fulfil plans in the 2013 National Policy on Mental Health to “deinstitutionalise mental healthcare”. The policy envisaged a gradual and systematic process of deinstitutionalisation over seven years, in order to adequately prepare communities, as well as to properly capacitate and improve community health centres. However, instead, the department adopted the Gauteng Mental Health Marathon Project – a rushed and ill-advised plan which appears to have been motivated more by a desire to save money than to uphold the government’s constitutional obligations and protect the rights of the mental healthcare user in their care.

After the termination of the contract, fearing for the safety and health of vulnerable mental healthcare users, family members, healthcare professionals and activists lobbied against the move. Officials in the department were repeatedly warned about the huge risks of discharging the mental healthcare users into unsuitable or unprepared alternative facilities. Letters were sent, meetings were held, and families protested. These families twice challenged the department in court, asking to postpone the closure of the Life Esidimeni facility until there was a proper plan.

Despite these warnings and in breach of a December 2015 settlement agreement requiring a safe plan for transfers, the department went ahead with its Marathon Project. The department approached NGOs to participate by taking in the mental healthcare users. Many of these NGOs were unsuitable. They were understaffed and had no experience in providing specialised mental healthcare. It was later revealed many NGOs were fraudulently licensed.

Patients were already being discharged in late 2015. However, the rate of discharge increased between March and August 2016. Some mental healthcare users with different diagnoses and medical needs were transported – sometimes in open bakkies – to various NGOs. The process was haphazard. Families were not informed, confidential patient records were lost or damaged, and patients were at times bounced between multiple NGOs.

As early as 2015, reports of deaths, many due to neglect of mental healthcare users, trickled in. In 2016, Mahlangu told the Gauteng legislature it was only 36 patients who had died. By September of that year, the number of deaths stood at 77. Amid the public outcry, the then Health Minister Dr Aaron Motsoaledi tasked the Health Ombud, Professor Malegapuru Makgoba, to investigate the deaths.

Released on 1 February 2017, the Health Ombud’s report detailed 94 known deaths of mental healthcare users due to the move from Life Esidimeni. The report outlined prima facie evidence of gross violations of human rights by government officials and NGO owners. The Health Ombud recommended that the families be compensated and that an alternative dispute resolution (ADR) be held.

In June 2017, former Deputy Chief Justice Dikgang Moseneke was appointed to arbitrate over the ADR which began in October and continued until 9 February 2018. SECTION27 represented 63 families in what would become an important truth-telling and accountability process, with 60 witnesses giving evidence about the inhumane treatment of their loved ones. High-ranking government officials testified, but many only shifted blame to others. The officials refused to take individual responsibility and framed the decision and implementation of the project as a collective act.

On 19 March 2018, Justice Moseneke delivered the Arbitration Award and found in favour of the families of the affected mental healthcare users. He awarded each bereaved claimant a total of R1.2-million in common law and constitutional damages and ordered the government to develop a recovery plan for mental healthcare services in the province within six months. Justice Moseneke also directed the government to erect a monument to memorialise those who lost their lives, but more than three years later, despite grand promises about apologising to families and suitably memorialising the loss, this has still not happened.

As early as 2016, SECTION27 received complaints from families of deceased mental healthcare users and requested the National Prosecuting Authority (NPA) to hold an inquest into the deaths. The deaths were due to unnatural causes and must be investigated based on the Inquest Act. The Act provides for a fact-finding process in circumstances of unnatural deaths. After continued pressure from SECTION27 for it to pursue prosecution, the NPA collected evidence for prosecution during the Arbitration. In September 2019, the NPA said it did not have enough evidence to bring charges against the departmental officials and was also not considering prosecution of the NGO owners. Instead, the NPA decided to conduct a Formal Joint Inquest into all 144 known deaths and announced in April of this year that the Inquest is set to start on 19 July 2021 before Judge Mmonoa Teffo at the Pretoria High Court.

Why this inquest matters?

The significance of an inquest is two-fold. It aims to find answers to a limited but important set of questions relating to the circumstances of a death and whether the death is a result of criminal conduct. An inquest is not a trial where there are “accused” parties who could be found guilty and sentenced at the end of the inquest proceedings. It is a public fact-finding process, led by a judge, and it seeks to establish what led to a death. At the end of an inquest, the presiding judge will make findings on the identity of the deceased; the cause or likely cause of death; the date of death; and quite crucially on the face of the available evidence whether the death(s) was brought about by any criminal act or omission. It is these findings that will help the NPA decide on criminal prosecutions.

To make these findings, the presiding judge considers the evidence presented by witnesses, including expert witnesses. In the Life Esidimeni inquest, Judge Teffo will consider evidence gathered by investigating officers of the South Africa Police Service, the NPA as well as the evidence from the arbitration hearing.

Second, inquests serve the important function of promoting public confidence in our criminal justice system by reassuring the public that death from any unnatural cause will receive proper attention and investigation and that appropriate measures will be taken to prevent similar incidents in the future. In the inquest that investigated the circumstances around the death of the struggle activist Ahmed Timol, the court held that an inquest is necessary for instilling confidence and for ensuring that the administration of justice is complete. The court also stated that “the inquest must be so thorough that the public and the interested parties are satisfied that there has been a full and fair investigation into the circumstances of the death”.

The Life Esidimeni inquest is incredibly important for the bereaved families to find closure and for accountability. “Mental health is deprioritised within our healthcare system,” says SECTION27’s executive director Umunyana Rugege. “We must look after mental healthcare users, those who are vulnerable. We must look after their rights, ensure their dignity.”

This inquest aims to do just that. By investigating the circumstances which led to the deaths of the mental healthcare users, they will be afforded the dignity they were robbed of by the “Marathon Project”. It will show that our criminal justice system values the lives of all who live in South Africa. DM

Julia Chaskalson is a communications officer at SECTION27, and Tendai Mafuma and Mbali Baduza are legal researchers at SECTION27.

This article is written by employees of SECTION27. Spotlight is published by SECTION27 and the Treatment Action Campaign but is editorially independent – an independence that the editors guard jealously. The views expressed in this article are not necessarily shared by Spotlight.