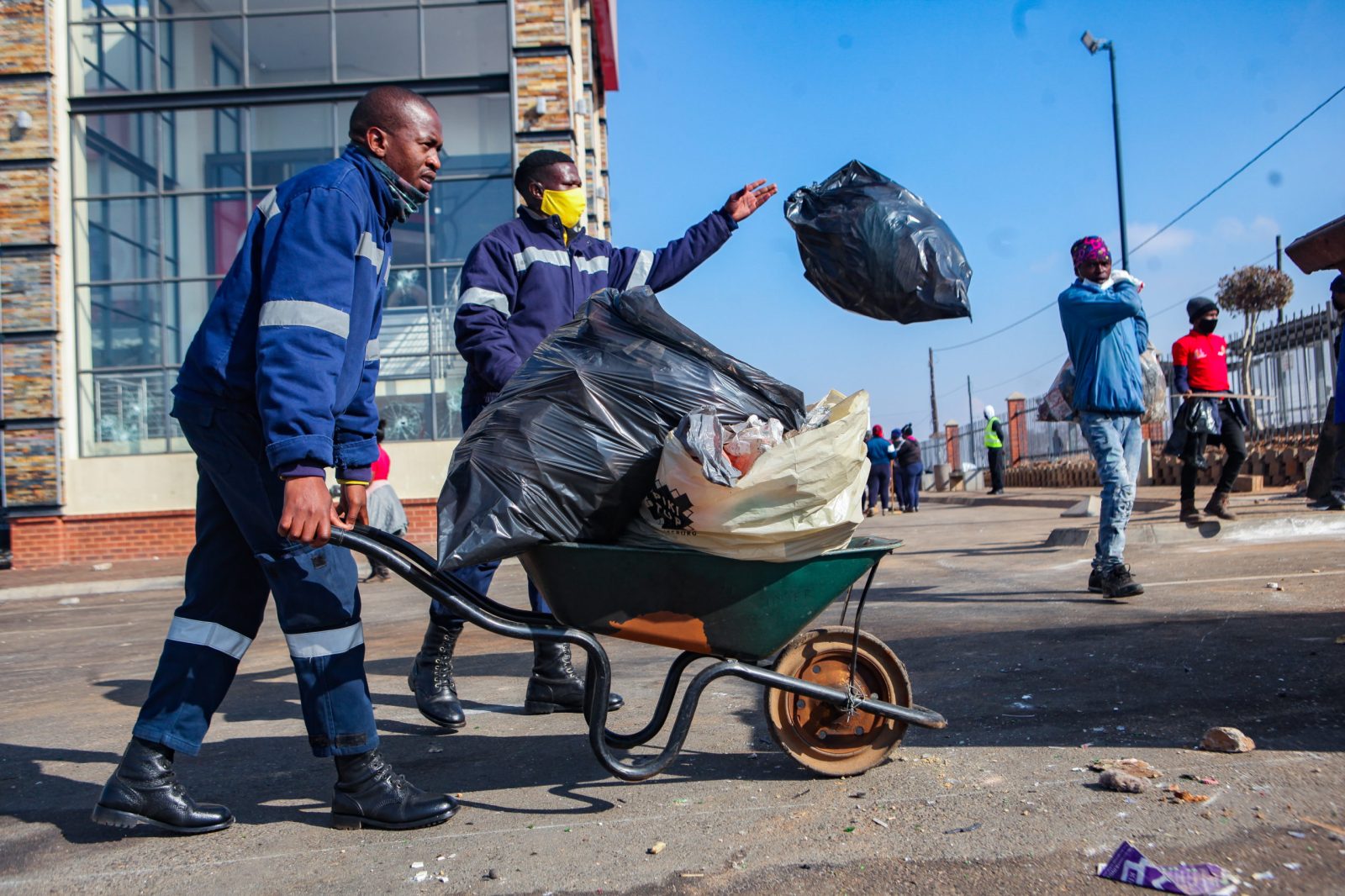 The looters are no different from the thousands of business owners who clink their whisky glasses at their cleverness in finding loopholes to dodge tax or the super-rich who hide their wealth in distant tax havens.

“This is not who we are as a people.”

These are the words President Cyril Ramaphosa recited in his weary, anodyne, almost defeated tone in his televised address on 12 July.

He said that the thousands of people who burned down shopping malls, torched trucks, helped themselves to essentials like food, luxury goods like big screen TVs and alcohol in the frenzied looting spree in parts of KwaZulu-Natal and Gauteng this week are not who we are as a people.

I beg to differ. What we saw this week is who we are as a people. The anger, the hunger, the greed is just as much a part of who we are as the forgiving and reconciliatory gestures of Nelson Mandela.

We are the product of the compromise that Mandela, Ramaphosa and the ANC made with the Nationalist Party in the 1990s. We won the right to vote but lost our way.

The ANC as a governing party inherited a corrupt state and a unequal economy in which the majority of the wealth sat in white hands, hands that carried the baton of generational wealth, from three centuries of looted land, and the sweat and toil of cheap black labour.

Instead of choosing the path of reconstruction and development, the ANC chose black economic empowerment, cadre deployment, outsourcing to tenderpreneurs and State Capture – all aimed at enriching an elite few politically connected cadres to the detriment of the majority who remained impoverished, unskilled and poorly educated.

As a public servant who stood firm in the fight against State Capture reflected: “We were so colonised we thought we had to aim for standards inappropriate for our conditions and probably well beyond our resources. And we thought we didn’t have the luxury to focus on values and identity.

“We ignored the lasting impact of violation on our collective psyche, on the rage and damage it left and on the need for genuine reparation for the victims.

“We did not help our communities and households heal and we naively believed that nationhood and social cohesion could be built on rugby and soccer teams.

“We alienated people from their roots and historical safety nets with unadulterated supplies of American pop culture and delusions of instant wealth. We came to see the latter as freedom.”

We are thus also a desperate army of ANC members who rallied to the support of our patriarch and provider of patronage when his stubborn refusal to abide by the Constitutional Court ruling forced him to hand himself in at the Escourt Correctional Services facility.

We are the Zulu nationalists who believed our time to eat and have what the rich have had came when our patriarch became president and who feel cheated now that his power has waned. So cheated that we threw our lot in with an incendiary attempt to destabilise the economy and the state to prove our support and might.

The looting and anarchy we saw is as much a part of who we are as the refusal of many in small and large businesses to understand why they cannot survive and thrive in a majority black country by remaining lily white from top to bottom, only hiring those black folk who “think” and “talk” like they do.

The looters are no different from the thousands of business owners who clink their whisky glasses at their cleverness in finding loopholes to dodge tax or the super-rich who hide their wealth in distant tax havens. Nor are they different from the tenderpreneurs who milked the state so they could drive around in Porsches through informal settlements crumbling in squalor.

We are the racists in all guises who believed we were right all along that blacks could not govern and SA would end up being a failed state. We are the narrow-minded thugs and bigots who despise the “coolies” on the one side and the “kaffirs” on the other – ignorant of the damage wrought by the devastating Indian-African race wars of 1949 and 1985.

We are the gangsters who made the Cape Flats a living hell before and after the dawn of democracy. We are the drug lords who hire an endless pool of expendable unemployed youth to peddle poison in forgotten townships like Mannenberg in Cape Town and Phoenix in Durban.

We are the holier than thou sages of truth and reason in the media who are deluded into thinking that we make a difference to the discourse with our worthy, long-winded sentences in English and Afrikaans that only speak to a few in the ever-shrinking middle class who can afford data or who have the money to buy newspapers.

The only light that shines through this mess is that part of us as South Africans that shuns the greed, the hatred, the bigotry, the competing egoes, the ignorance, the arrogance, the opportunism, the racism and the battles for power in our name.

And that light shone through in this week of mayhem. We are the people of Pimville who protected Maponya Mall, the taxi drivers who blocked off shopping centres, the nurses and doctors who went every day to save lives and heal the sick even when their own lives were at risk.

We are the members of communities in Gauteng and KwaZulu-Natal who took out our brooms and cleaned up the mess. We are the people who feed the hungry in soup kitchens, make rotis for hospitals that run out of bread, who comfort the bereaved and help the injured get the medical care they need.

We are beautiful. We are kind. We are resilient and resourceful. We are compassionate. We are also hateful. Self-interested. Greedy. Destructive. Ignorant. We are all kinds of amazing and all kinds of fucked up. We are all of this. The denial and distancing of those parts of who we are as South Africans that make us uncomfortable will only lead us further astray.

The thing is we are the Gini coefficient that makes us that country with the highest income gap between rich and poor in the world. Take a pause and consider what that means. It means that the top 10% of the population holds 71% of the wealth. And the bottom 20% earn less than 5% of the income.

No political party, no economist, no billionaire, no clever member of the commentariat has come up with any plan that has narrowed that gap that lies at the heart of everything that is wrong about us.

If we do not want a repeat of this week’s horror, we need that glimmer of light that shines through all of us to work on ways to close that gap between the few haves and the many have-nots. To aim towards a basic income grant. To create more jobs and skills. To improve the quality of our education. To inform all members of society, not just those in the middle class who have access. To stop the looting and shooting, and build a country and economy that is inclusive and benefits us all. DM168

Heather Robertson is the editor of Daily Maverick 168.