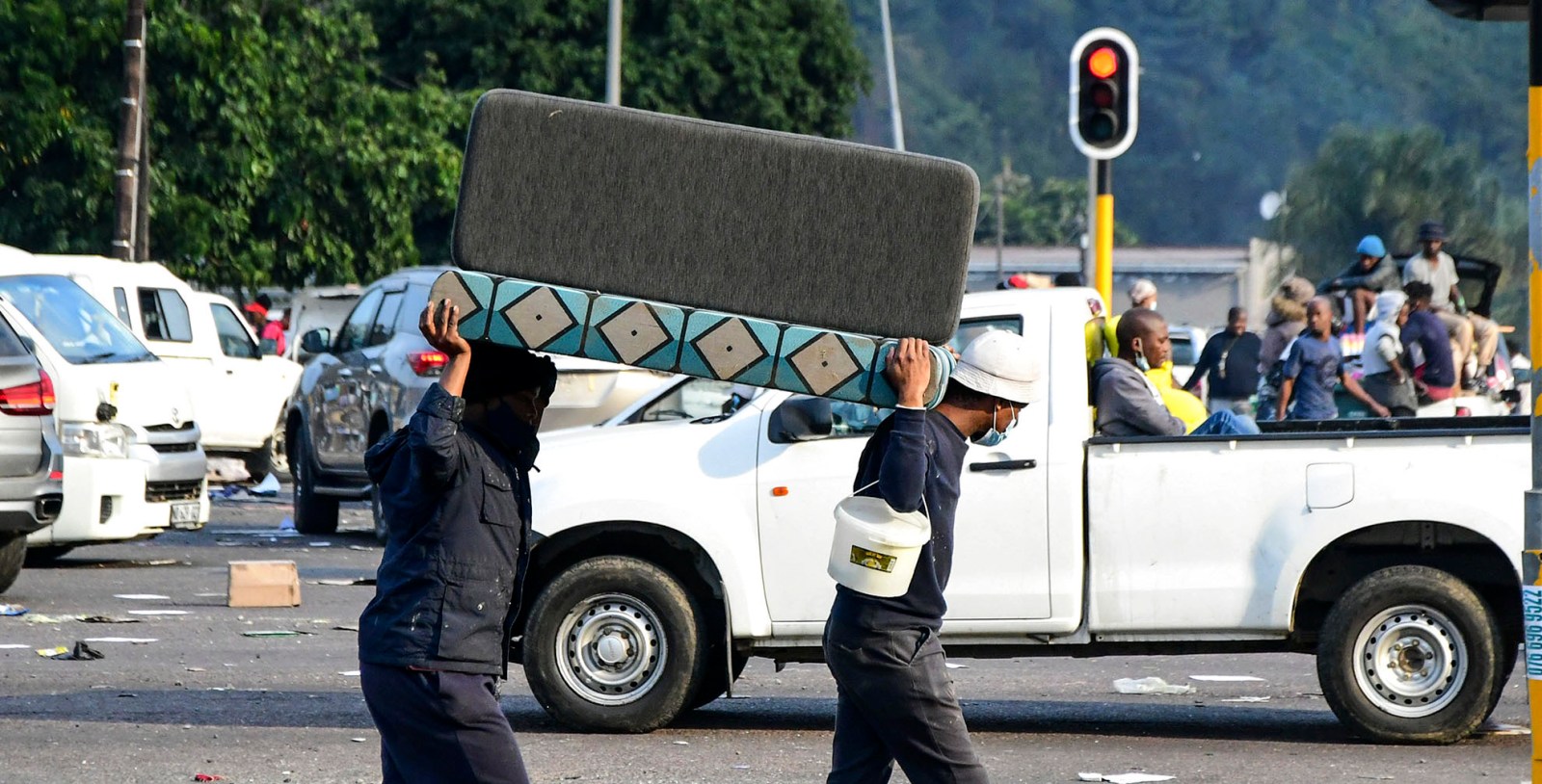 South Africans are expected to face major food shortages in the wake of days of violent unrest across two key provinces, as rioters upend supply chains by looting supermarkets and torching goods trucks.

With billions of rands of damage to warehouses, shopping malls and transport infrastructure in KwaZulu-Natal, the full impact on the everyday lives of the province’s residents is beginning to emerge as food and fuel supply chain lines dry up.

By Wednesday morning, a run on the tanks saw queues of cars snake towards petrol stations for hours only for many to be turned away.

In parts of Durban, long queues formed outside the few open food shops and basics such as bread and milk were in short supply.

“Food is going to be a problem because shops haven’t been open for three days and many with bulk storage have been looted,” said Gavin Hudson, chief executive officer of sugar producer Tongaat Hulett Ltd, which has suspended milling and refining operations outside the city. “We are going to face some food issues in KwaZulu-Natal very shortly.”

Supermarkets that remain open and petrol stations in Kloof and Pietermaritzburg saw queues hours long, while in suburban areas residents rallied together with widespread bartering and sharing of commodities.

Rapidly beefed-up neighbourhood watches were monitoring highway off-ramps and other access points to prevent any intrusions to still unaffected shopping malls and trading areas, while counting the costs in stored household items held at ransacked storage depots on suburban outskirts.

“We have two bags packed and ready to evacuate — last night there was sustained gunfire near us and we were terrified. Only this morning did we find out that it involved police keeping intruders at bay,” said one Kloof resident, who did not want to be identified.

Another tells of how a bulk food ingredients factory owner was loading basic items onto his bakkie and alerting his neighbours about where and when he can be found, in order to distribute to those most in need.

Bartering and sharing of essential household goods have become commonplace, mostly in suburbs where shopping malls were just smoking wrecks, looted or closed down due to security and staffing concerns. A common concern among inter-family Whatsapp groups was supply chain disruptions and their impact in the days and weeks to come.

Supermarket shelves were being rapidly emptied of goods that had little hope of being replenished anytime soon. Members of the local community were operating tills and petrol bowsers to enable facilities to function.

Residents of kwaXimba, a small village in rural KZN, report having no access to bread for several days as food and medication deliveries remain paused.

In some areas, farmers have had to place orders for eggs and fresh produce on hold as they have been overwhelmed by the demand.

In Umhlali, supermarkets have run out of all staples foods — flour, meilie meal, sugar, potatoes and rice. In some instances, shoppers are buying up to 10 trays of eggs (180 eggs) at a time.

In Port Edward, only one supermarket, Sentra, escaped looting but increased demand for goods meant its stocks quickly ran out.

In Hillcrest, people began queuing outside the Spar from about 5am. Seven hours later, some had yet to enter the doors as the queue continued to trail across the car park, around the building and out onto the road.

A Daily Maverick reporter has visited no less than six petrol stations in Umlazi and the Durban city centre in an attempt to fill up, but at the time of publishing was yet to be successful.

Relatives in unaffected provinces watched in disbelief as videos of the mayhem were posted on social media. Debates raged in communities about exercising maximum restraint while neighbourhood watches exhibited “shows of force,” citing the immediate subsidence of looting when thinly stretched and poorly equipped official security forces showed up.

The unrest began in the form of protests against the arrest of former president Jacob Zuma, but soon degenerated into deadly and destructive rampages in KwaZulu-Natal and Gauteng — South Africa’s economic hub.

Looters have pilfered food, electronic goods and medical supplies from at least 800 stores, and retailers have collectively lost an estimated R5-billion to date, according to the Consumer Goods Council of South Africa. Beer depots and liquor stores, already unable to operate due to a ban to contain the pandemic, have also been targeted.

Queues at the garage on Oxford St in central Hillcrest on 14 July 2021.

More than 35 trucks have been destroyed, with a cost to logistics firms of at least R300-million rand and counting, the Road Freight Association estimates. This has led to the closing of a key highway between Durban and Johannesburg, cutting off the flow of food and other essential goods from the country’s biggest port to its most populous city.

Citrus farmers are in mid-export season and are among those unable to harvest and transport their produce, Christo van der Rheede, executive director of AgriSA, said in an interview. Sugarcane fields have been razed and livestock stolen, and commitments on exports that bring in crucial foreign exchange and support jobs may not be met, he said.

Kwanalu, the KwaZulu-Natal agricultural union, estimates the losses for the provincial farming community to be in the hundreds of millions of rands.

“South Africans are very fortunate to receive fresh fruit, fresh meat, fresh vegetables on a daily basis,” Van der Rheede said. “If these supply chains are disrupted, there won’t be fresh produce in stores and people will have to rely on frozen supplies. But what do we do if we run out of that as well?”

The food crisis is developing more than 18 months into a coronavirus pandemic that’s led to a spike in hunger around the world.

While the crisis may have its roots in support for Zuma, the scale of the outbreak has also been linked to years of poor government services and a record unemployment rate of 32.6%.

South Africa is one of the most unequal countries in the world, underlying a high crime rate, and President Cyril Ramaphosa on Monday described the violence as “opportunistic acts of criminality, with groups of people instigating chaos merely as a cover for looting and theft”. DM