The South African National Defence Force (SANDF) has been deployed to areas in KwaZulu-Natal and Gauteng experiencing civil unrest. Brigadier-General Mafi Mgobozi confirmed the deployment with Daily Maverick on Monday. At the time of writing, there were six confirmed deaths.

“At the present moment, the SANDF has received a request from the NatJOINTS for deployment from those areas in Gauteng and KZN. I cannot confirm when the deployment will be, but once all the processes have been completed, we will be able to deploy.”

“At the moment we don’t know [how many people]” he added.

SANDF was still “working on the request”.

“Once everything has been completed, we will be able to deploy. How it will unfold, we can’t say now.”

Mgobozi’s statements come as rumours abound that the SANDF is already in KwaZulu-Natal, and that Rooivalk helicopters have been deployed to areas in the north of the province.

The request from NatJOINTS follows a weekend of looting and violence that started in pockets of KwaZulu-Natal and quickly spread to areas of Gauteng, ostensibly by followers of former president Jacob Zuma, who are using acts of domestic terrorism to demand that he be freed from Estcourt Correctional Centre.

Zuma started his 15-month sentence last week after being found in contempt of a Constitutional Court order that he appear before the Commission of Inquiry into State Capture. At the time of writing, the apex court was hearing Zuma’s application for rescission.

NatJOINTS confirmed that as of 8.30am on Monday, 219 arrests had been made – 96 in Gauteng and 123 in KwaZulu-Natal. The total number of deaths at that time stood at six.

“The NatJOINTS has intensified deployments in all the areas in Gauteng and KwaZulu-Natal affected by the violent protests as the damage to property and looting of stores continued overnight,” a NatJOINTS statement said.

The civil unrest comes after President Cyril Ramaphosa extended the country’s adjusted Level 4 lockdown on Sunday night. South Africa is battling a third wave of the Covid-19 pandemic, with mitigation measures in place that include a 9pm-to-4am curfew. 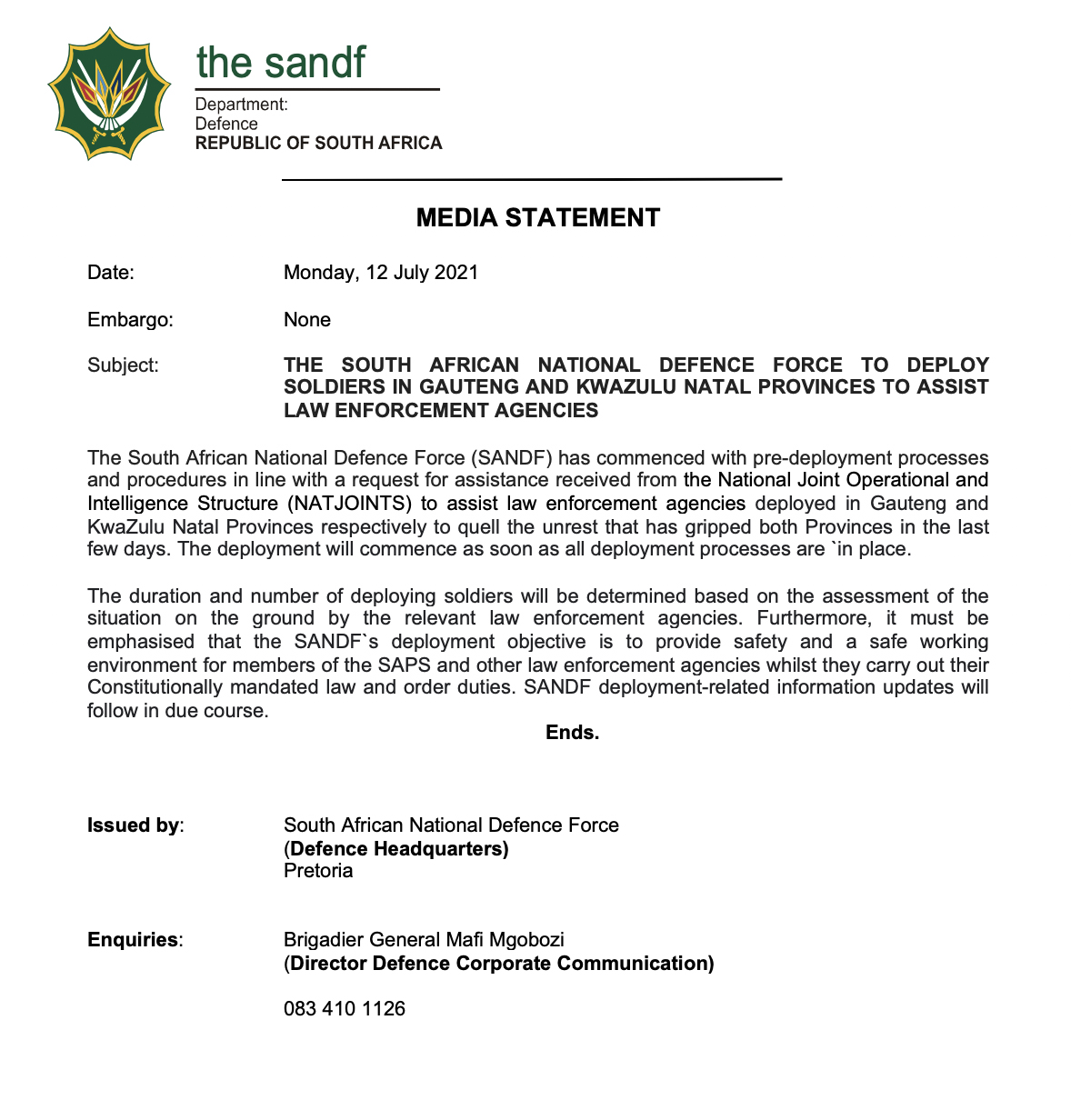 KwaZulu-Natal is, at this stage, still experiencing the brunt of the violence, and repercussions have been particularly nasty.

“The Municipality has closed its clinics due to threats that have been directed at health facilities in the City. The ongoing civil unrest has also affected community vaccination sites which have been unable to operate today. The Municipality will reassess the situation during the day and advise the public accordingly.”

The provincial government said on Sunday that, at that stage, the estimated damage in the province – a culmination of torching of trucks, infrastructure damage and looting – sat at a “conservative” R100-million.

This does not take into consideration the additional costs to the provincial economy, as major retailers and shopping centres remained closed on Monday. The eThekwini metro’s bus service had been suspended, and taxis were not operating.

Daily Maverick was only able to find one retailer open in the Berea/Bluff area on Monday, with queues outside stretching to 50 people. Most residents have bunkered in their homes in townships and suburbs. The tension is palpable.

Affected areas in eThekwini include Peacevale along the N3, Umgababa on the N2, KwaMashu, Inanda, Umlazi, Clermont, Pinetown and the CBD.

In Umbilo on Sunday night, running gunfire could be heard at least 3km from hotspots, as the perpetrators looted liquor outlets and shops, shot at and stoned police and set fire to stores and malls.

The Cornubia Centre, just outside Umhlanga, which is part of a huge R25-billion mixed-development housing establishment opened by Zuma in 2014, has also been targeted by looters, with a Makro warehouse coming under siege.

Durban’s popular Springfield Park,  a manufacturing and warehousing hub and home to dozens of factory shops, has also been targeted, as have several malls throughout the city, including areas in Glenwood, Waterfall  and Reservoir Hills.

In Mtunzini, a  small village on the north coast where Zuma would occasionally stay while he was president, residents along with police and private security have barricaded the only entrance to the town.

In a coastal suburb of Richards Bay, Meerensee – where the former chairperson of the Jacob Zuma Foundation, Dudu Myeni, lives – similar scenes are playing out, with the main road into the suburb also blocked by armed residents, security and police.

The latest reports from both areas are that the mood is tense but not violent.

In the largest town nearest Nkandla, eShowe – where Zuma’s bodyguards would often station themselves while on his protection detail – there have also been reports of protesting and looting.

As of midday on Monday, no reports of attacks on foreigners in the KwaZulu-Natal area had been reported, according to Daniel Dunia, executive director of the Africa Solidarity Network. Sporadic outbursts of violence in the province often culminate in attacks on foreign-owned businesses and residents.

However, Dunia told Daily Maverick that reports were being received of threats in Gauteng. “We have been told that once they take care of the international companies, they are coming for us,” he said. DM

This is a developing story and will be updated.