The Story of a Cape Town Street: From bustle to bust thanks to Covid-19 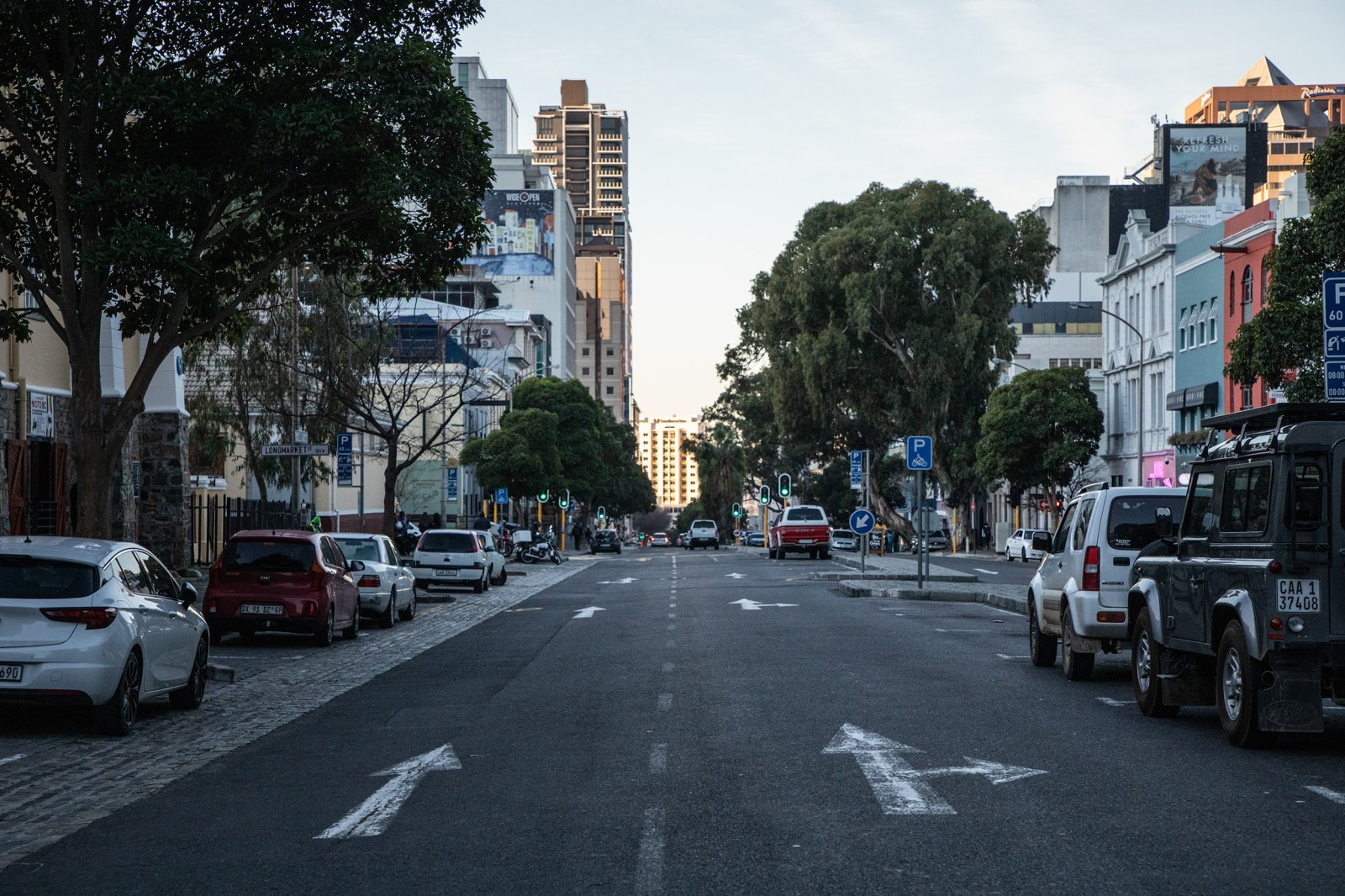 Bree Street, one of the oldest Streets in Cape Town, on Wednesday evening, 7 July, with hardly anyone around and many of the bars and restaurants closed, paints a bleak picture compared with pre-pandemic times. The country went into lockdown Level 4 on 27 June 2021. (Photo: Victoria O’Regan)

Empty shopfronts. Closed restaurants. The Covid-19 pandemic has wreaked havoc in every corner of the country – affecting livelihoods and wallets. On Bree Street, a familiar sense of dread has returned to restaurateurs and traders following the introduction of Level 4 lockdown restrictions.

“It’s a ghost town,” said Amiena Jassiem, the manager at Relabelled. Jassiem was leaning against the front of the retail shop, scoping the empty street. Moments before she had been hailing potential customers – “sale inside!” she shouted – in an attempt to lure them through the doors.

“If you don’t call them, nobody comes in,” Jassiem told Daily Maverick when we visited the Cape Town CBD on Wednesday evening.

Cape Town’s historical Bree Street is in the retail hub of the CBD, and is home to restaurants, bars, nightclubs, hotels and several high-end clothing shops.

According to Central City Improvement District (CCID) CEO Tasso Evangelinos, there are 87 retailers on the street, including restaurants. “This is about 8% of all retailers in the CCID footprint in the central city,” said Evangelinos.

“Since the start of the nationwide lockdown on 27 March 2020, the economic effects have been deeply felt in the Cape Town CBD, especially by small owner-run and managed businesses. Some CBD retailers have since closed their doors. This includes retailers across the spectrum, from eateries to clothing boutiques,” said Evangelinos.

However, throughout the pandemic central city entrepreneurs had adapted for survival, showing “resilience and agility” and pulling out all the stops to survive Covid-19.

When Daily Maverick visited Bree Street on Wednesday the bustle had given way to an eerie emptiness. Many shops were either empty or boarded up. Chains were coiled firmly around the doors of several restaurants.

“Closed due to Covid-19” read signs on windows and doors.

The country entered Level 4 lockdown on 27 June 2021. Prompted by the rapid increase in Covid-19 cases, President Cyril Ramaphosa announced that public gatherings and the sale of alcohol were banned and restaurants were prohibited from having eat-in customers.

The new restrictions would be reviewed in 14 days.

After nearly 18 months of alcohol bans, trade restrictions and curfews, restaurants and bar owners are reeling from the prolonged stress of the pandemic and crying out for the restrictions to ease come Sunday.

“Our best day in these two weeks is our worst day normally,” the junior manager of Clay Cafe on Bree Street, Jarred Ford, said.

On Wednesday afternoon the cafe was empty, except for a few staff members and one customer who was searching for her pottery item among the rows of shelves.

Since the introduction of Level 4 lockdown the restaurant and craft space has been operating with a skeleton staff, said Ford. Designed around the concept of pottery painting, Clay Cafe would normally also serve food and alcoholic beverages but, since 27 June, the restaurant has been closed and the establishment has only opened to sell their “home painting kits”.

A post shared by Clay Cafe In The City (@claycafe_inthecity)

Salem Mbaya, manager of Clarke’s Bar and Dining Room, said his restaurant had also been hit hard by the ban on eat-in customers, and he too has been forced to reduce staff.

“We’ve really been affected a lot,” said Mbaya. It didn’t seem likely that Clarke’s Bar would reach its sales target for the day by the time Daily Maverick visited on Wednesday evening.

Open only for takeaways, Clarke’s Bar is surviving by selling food on apps such as Mr Delivery and Uber Eats, said Mbaya.

With the cost of electricity and rent weighing heavily, Mbaya said it would be “devastating” if the President extends the lockdown. If he does, “the idea is to close the doors until things get back to normal”.

According to Restaurants Association of South Africa (RASA) CEO Wendy Alberts, layoffs in the sector are mounting, with nearly 750,000 people having been put on unpaid layoff and 30% to 40% of restaurants closing permanently since the introduction of Level 4 lockdown.

“RASA has reached out to every ministerial cabinet in search of consultation for relief and reprieve for the industry. Empty promises and deaf ears are all we have had in response to our calls,” Alberts told Daily Maverick.

With takeaways only, restaurants are unable to cover the operational costs to stay afloat, she said. RASA has sent requests to Trade and Industry Minister Ebrahim Patel to suspend certain licences, including liquor and SABC TV licences, to help give some relief to restaurants, she added..

“We’ve also asked for the halting of all our lease payments, and that all restaurants with leases suspend their lease payments with immediate effect to give us some relief,” she added.

Weighing in on the impact of the latest restrictions on the industry, Alberts said RASA would not stand for a further lockdown.

“I will stand at Ramaphosa’s door if I have to. And I will bang down that door until he allows this industry to open. We’ve given him two weeks. He said two weeks,” she said.

Before the Covid-19 pandemic struck, 250,000 to 300,000 people on average visited the city centre in the day, and about 25,000 at night, said Evangelinos. “These numbers expanded during the festive season.”

In 2019, the CCID found Bree Street to be one of the most popular entertainment destinations in the city centre, along with Kloof Street and the East City.

“A total of 430,000 people attended 111 official events in public spaces in the Cape Town CBD during 2019,” according to the City of Cape Town’s Events Office.

Evangelinos said it has been nearly impossible to measure footfall in Cape Town’s city centre since 27 March 2020, when the first lockdown was implemented.

“The subsequent lockdowns and imposed curfews have played havoc with visitor numbers, which have dropped dramatically, with venues that usually attract a lot of people being forced to close their doors much earlier than usual, and late-night venues such as nightclubs not being able to operate at all,” he said.

First Thursdays, a cultural event that takes place in Johannesburg and Cape Town on the first Thursday of each month, has suffered a particularly heavy blow.

First Thursdays’ co-founder Michael Tymbios said the business has been “under tremendous strain” for months, and an extension to the lockdown wouldn’t make a difference at this point in offering immediate relief.

The event, which supports a number of participating restaurants, galleries and bars, has been hindered by alcohol bans, curfew and limitations on gatherings since March 2020, and the recent introduction of Level 4 lockdown has forced the organisers to cancel the event, until restrictions are lifted.

The number of participating businesses has dropped since March 2020, said Tymbios. This is a result of businesses being forced to close down, and indicative of people’s budgets being stretched, he added.

First Thursdays would bring in large amounts of foot traffic into the CBD, benefiting not only the participating restaurants and galleries, but others in the area.

“[It] would bring in a lot of customers – it was one of our best days,” said Mbaya. “[Clarke’s Bar] would usually stay open late because of the increase in customers.”

Informal traders and car guards, who also eke out a living on the street, echoed Mbaya’s remarks about First Thursdays. A car guard, who was reluctant to give his name, told Daily Maverick he would work late on weekends and on First Thursdays to earn extra cash from the influx of visitors.

“But now the streets are quiet,” he said. “We don’t know when the people will be back again.” DM