Despite supporters fanning flames, all bets are off for...

Despite supporters fanning flames, all bets are off for Zuma as case ‘collapses like a deck of cards’ 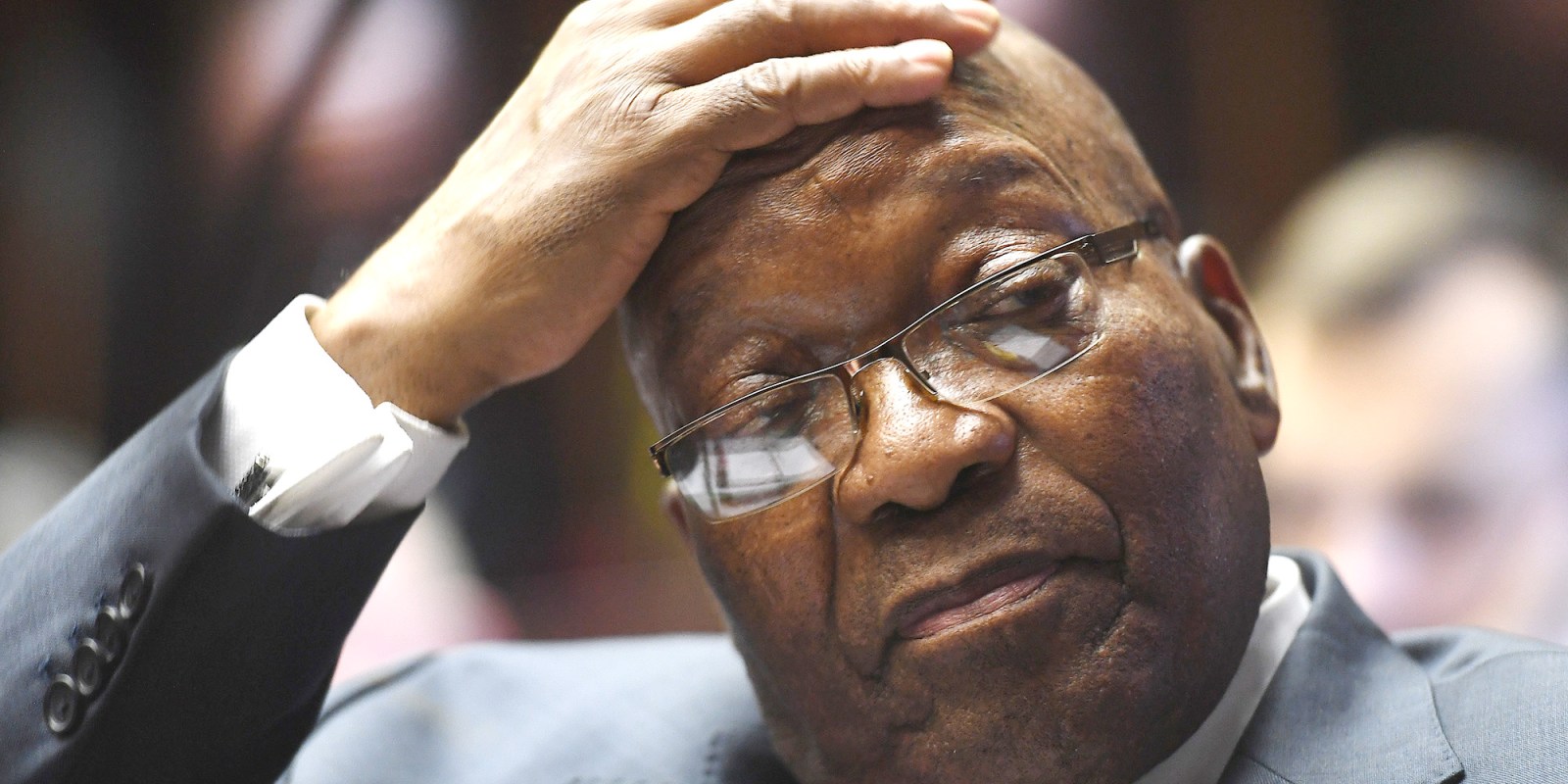 In a short but stinging written judgment released by Pietermaritzburg high court Judge Jerome Mnguni, Zuma’s argument for relief — made earlier in the week — was taken apart.

The Pietermaritzburg high court on Friday dismissed with costs former president Jacob Zuma’s application to stay or interdict the Constitutional Court order for his arrest and committal, calling it “judicial adventurism” that would disturb the natural order and, if granted, would be “unlawful and unwarranted relief”.

“What, in my view, this application seeks to achieve is to entangle this court in judicial adventurism (which has been strongly deprecated in constitutional democracies) and to make whimsical orders which have the effect of granting unlawful and unwarranted relief,” said presiding Judge Jerome Mnguni.

The urgent application was heard on Tuesday in a last-ditch effort to keep Zuma from starting a 15-month sentence for contempt of court for his failure to appear before the State Capture commission, chaired by now Acting Chief Justice Raymond Zondo, as he was ordered to do by the apex court earlier in the year. The sentence was ordered by the Constitutional Court on 29 June.

Zuma’s advocate, Dali Mpofu SC, had argued that the high court had the jurisdiction to suspend the apex court order. Mpofu also said that the commission and the Helen Suzman Foundation, which opposed the application, were “busybodies” and did not have locus standi, thereby making the application unopposed, meaning it should be granted.

Mnguni was not swayed by either of these arguments or by Mpofu’s assertions that the Criminal Procedures Act was unconstitutional because it did not allow for civil contempt to be dealt with “in accordance with the CPA and the Constitution”.

“It is common cause that in this country there is no higher authority than the Constitutional Court, and that its decisions cannot be undermined by a lower court. Should this court accede to the contentions advanced on behalf of Mr Zuma, then the hierarchy will be disturbed and there will be no finality to legal decisions,” said the judge.

Zuma is currently incarcerated at the Estcourt Correctional Centre, having arrived by high speed presidential motorcade at about 2.20am on Thursday.

It appears that Zuma and his legal team had thought that by bringing the application on Tuesday, it would automatically stay his arrest.

Part of their argument was that the Constitutional Court is expected to hear his rescission application on Monday, where he hopes it will dismiss the sentence order or change it, with the 79-year-old’s  “health condition” and Covid-19 being mitigating factors.

These aspects were also raised in the Pietermaritzburg matter, but Mnguni remained unconvinced.

“Mr Zuma’s concerns about his health are not supported by any evidence. This court is thus not in a position to determine the nature of the harm, and to what extent it might be irreparable.”

The judge said Zuma’s argument that the State Capture Commission had no locus standi was also “grounded on an unsound rationale” while his claim that rule 45A of the Uniform Rules of the Court, which allows courts to issue suspension orders, was “ill-conceived” as a court only suspend orders it had issued.

He said Zuma’s case for an interdict to be granted by the Pietermaritzburg court was further weakened because such should have been lodged with the apex court.

“Unsurprisingly, faced with this seemingly insuperable difficulty in relation to the invocation of the incorrect and unprecedented procedure, the rest of Mr Zuma’s case then collapses like a deck of cards,” said Mnguni.

Anger at Zuma’s incarceration has been playing out on the streets of KwaZulu-Natal since early on Friday morning, where supporters of the former president stopped truck drivers and stole their keys, leaving heavy-duty vehicles blocking roads, particularly in the northern parts of the province.

Refuse was set alight, building sand tipped from trucks, and tyres burned. By 1pm, reports were emerging of sporadic looting in the Durban CBD. Looting had also taken place in KwaMashu.

During a multi-disciplinary parade in the northern KZN town of Empangeni earlier in the day, police minister Bheki Cele thanked officers involved in efforts to have Zuma hand himself over. He told the SAPS members that there had been much “diplomacy” and “responsibility” involved in the affair.

Major General Nonhlanhla Zulu had led talks to have Zuma hand himself over, said Cele. She later told the media that it had been an “emotional situation”. Negotiations between the former president and the authorities reportedly took about nine hours.

Cele called the operation one of the “most beautiful” police had conducted, albeit under trying circumstances, and said criticism that events were not appropriately handled must “come to an end”.

There could have been “a disaster”, he said. Instead, there was “no blood, no exchange of fire, nobody died”.

The police had been ready to take an “extra step” if it was needed, he said. The South African public should thus afford SAPS the respect and recognition it deserved he added.

Cele later told eNCA that 14 trucks had blocked the roads in the Empangeni area. Thirteen protestors, “including women” who had been hiding the keys to their vehicles in their clothing, had been arrested thus far, he said.

Supporters have made known their intent to continue protesting throughout the weekend.

The department of correctional services issued a statement on Friday saying reports that there was a “hunger strike” at Estcourt prison — presumably because of Zuma’s incarceration — were false.

Meanwhile, the KwaZulu-Natal provincial government has called for calm.

Commenting on this morning’s development, Premier Sihle Zikalala called for utmost discipline and for protesters to express their anger through legitimate and peaceful platforms.

“We understand the extreme anger of the people who are protesting. As a country and province, we find ourselves in a very unusual and unique situation wherein we are dealing with the arrest of a former president of the ANC and the country. We are therefore dealing with very challenging times. However, we call on those who are protesting to do so through peaceful means and to avoid violence and destruction at all costs,” said Zikalala.

He said the provincial government has been “briefed on the security situation on the ground and we can assure the people of the province that all law-enforcement authorities are now on high alert and are addressing the incidents as they evolve”. DM