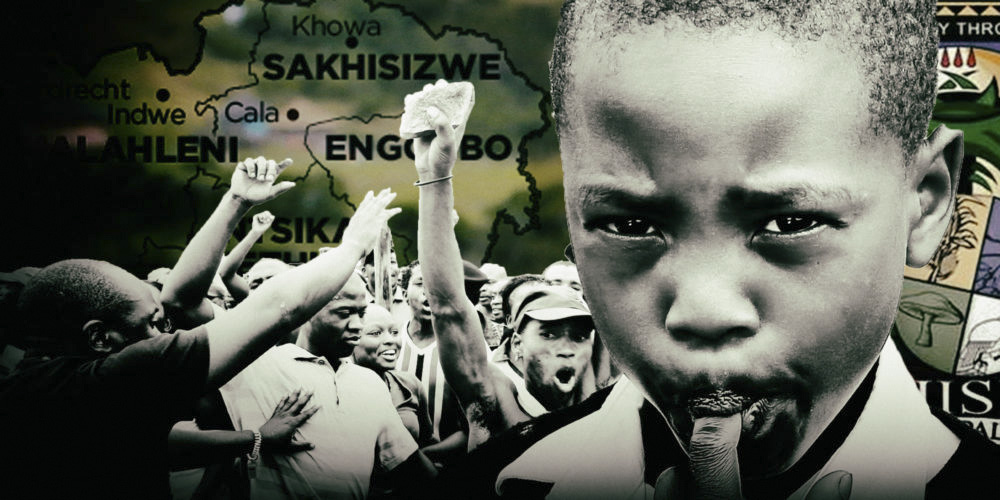 Local elections are a key moment to hire and fire public representatives in a democracy. The public must rigorously examine the integrity of the leaders they are voting for lest they end up with public office bearers and leaders of the calibre of Sakhisizwe’s municipality.

The Sakhisizwe Municipality is the smallest of the six local municipalities under the Chris Hani District Municipality in the Eastern Cape. It covers the small towns of Cala and Khowa (Elliot). Municipal documents indicate a population of about 63,582 adults, 98% of whom are black Africans. The municipality has nine wards and a total of 17 council seats, 14 of which are held by the ANC.

As small and as remote as Sakhisizwe is, it has punched above its weight in the media space over the past number of years. First, because it has a vibrant civil society that has pushed back with great success against numerous processes that were imposed upon it by the government.

The imposition of a traditional leader by the member of the provincial executive council (MEC) responsible for cooperative governance and traditional affairs is a case in point. Cala Reserve, an area in Sakhisizwe that has, according to its customs, elected its headmen for more than 100 years, suddenly had an unelected headman imposed upon it by the government in 2013. The residents of Sakhisizwe pushed back with great success, forcing the entire country to reflect on the right of rural communities to decide how they want to regulate their affairs.

In 2018, Sakhisizwe featured prominently in mainstream media because of its “total shutdown” protests. At the time, a faction of the ANC Youth League had decided to bring municipal operations to a standstill, citing irregularities in procurement processes, among many other things. Following the shutdown, the ANC recalled the mayor it had deployed to the municipality and suspended the municipal manager.

This in itself was interesting because it was fairly rare that the youth arm of the ANC revolted against its mother body in the way this youth grouping in Sakhisizwe had. The ANC had an overwhelming majority of seats in the Sakhisizwe municipal council. The pressure for it to act against the mayor and municipal manager did not come from opposition benches, but from within the party itself.

Events following the recall of the mayor in 2018 highlighted for the first time the tensions between the Cala block and the Elliot block of the ANC, which often cripple governance in Sakhisizwe and in the Chris Hani District in general.

As the governance challenges in Sakhisizwe began to affect service delivery, civil society was forced to mobilise. During this time, Sakhisizwe was performing poorly in audit outcomes; in fact, it could not even provide the basic information needed for an audit process to ensue – even after receiving and spending its allocated equitable share and grants.

A local NGO, the Cala University Students Association, coordinated the civil society effort to strengthen governance and service delivery in Sakhisizwe and led a forum for civil society. The forum made numerous efforts to obtain information from the municipality.

Neither the municipality (mayor, speaker and acting municipal manager), nor the cooperative governance and traditional affairs MEC – who, by law, deploys an administrator to a municipality – could provide information or answers to the questions raised by civil society.

This lies at the heart of why the story of Sakhisizwe is important for strengthening municipal governance in South Africa. Political leaders and public office bearers in municipalities undermine the critical role played by civil society in strengthening municipal governance. It is baffling that the municipality was placed under administration and neither the MEC nor the municipal council saw fit to take the public of Sakhisizwe into their confidence regarding the process and what it was intended to achieve.

A municipality is made up of three key cogs: political deployees and elected representatives who make up a council, the administration and the public of which civil society is a part. All of these must work together towards a common goal. It begs so many questions when civil society is forced to go to court to force a public institution to provide information that should be in the public domain.

Access to information is a prerequisite for meaningful public participation, the kind that strengthens governance. The Promotion of Access to Information (PAIA) legislation provides a framework through which the public can request and access information held by public institutions that should be in the public domain.

After countless failed attempts to access information from Sakhisizwe, civil society went to court. Assisted by the Centre for Applied Legal Studies, a legal clinic based at the University of the Witwatersrand, the Cala University Students Association and its civil society partners successfully obtained a court order (in an unopposed application) compelling the municipality to release the documents as requested.

It is extremely unfortunate that this was the last recourse for civil society in Sakhisizwe. One wonders how many organisations have attempted, without success, to access information from municipalities across the country. Litigation is a costly exercise and more often than not, inaccessible to civil society. The Cala University Students Association and its partners in Sakhisizwe were fortunate to have received the necessary legal support.

As we move towards the 2021 local government elections it is important for citizens and civil society across many municipalities to reflect on the calibre of people elected into positions of leadership and authority. It is even more important to reflect on the manner in which they have been able to handle public money and the relationship that they have been able to calibrate with civil society.

The posture of the political leadership and the administration of Sakhisizwe towards civil society and the citizens in that area leave much to be desired. But this is not unique to Sakhisizwe – it happens in many municipalities across the province.

Local government elections are a key moment to hire and fire public representatives in a democracy. It is not a moment to be taken lightly. The public must rigorously examine the integrity of the leaders they are voting for lest they turn out like the ones in Sakhisizwe, who were not bothered that the municipality was receiving disclaimers for years in a row, that they  could not account for how it spent public money, and that nepotism and irregularities were the order of the day.

We can only hope that as we approach the polls, our votes will reflect our hopes and intentions. DM/MC

Nontando Ngamlana is a social justice activist whose research focuses on local governance and rural democracy in general. Lwazi Ncapayi is a social justice activist with a keen interest in matters of rural democracy, human rights and constitutionalism. He is a member of the Cala University Students Association and coordinates its legal research and litigation. They write in their personal capacity.