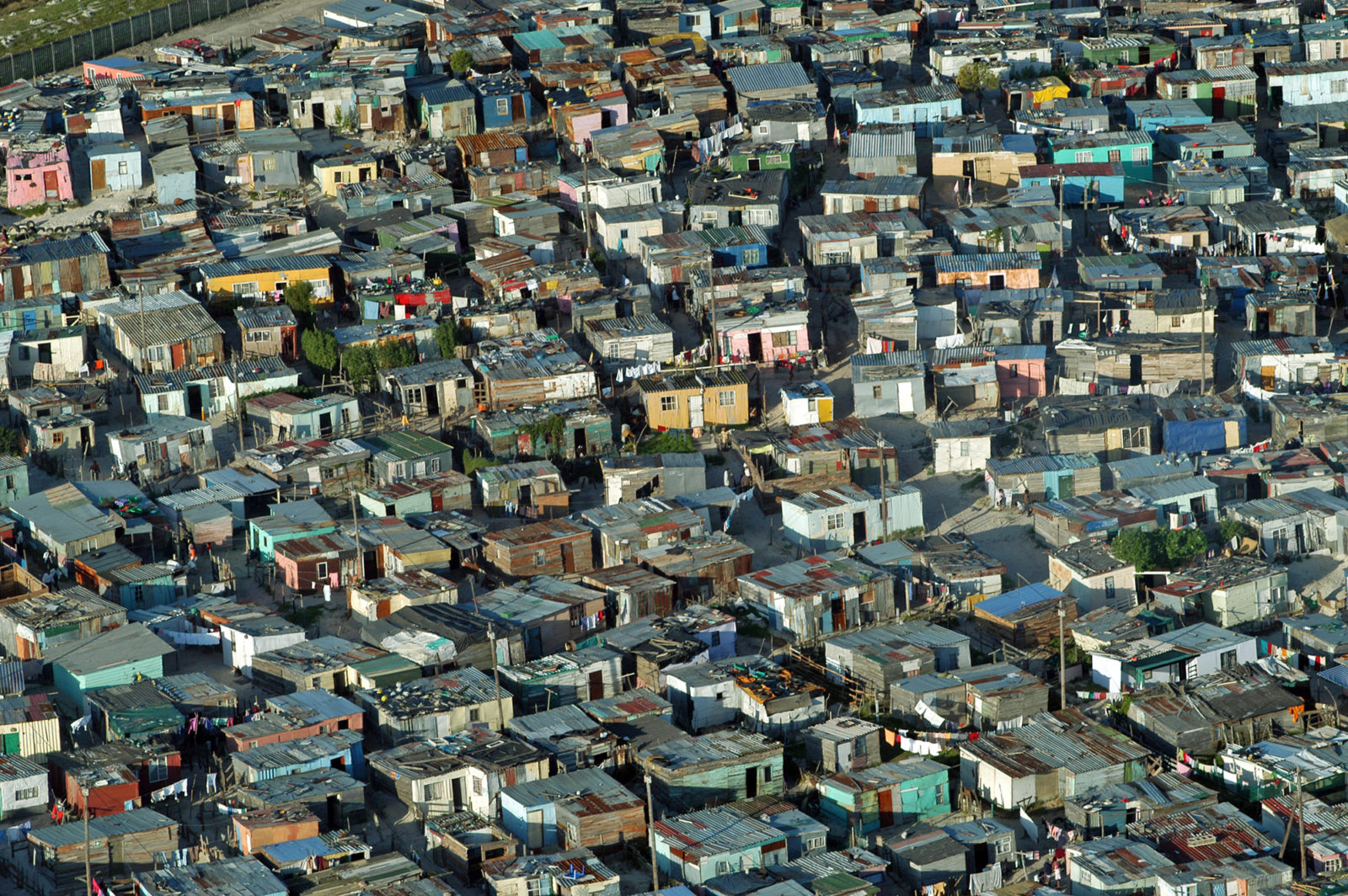 An overcrowded squatter camp with rows and rows of houses situated on top of one another. (Photo: Eric Miller)

To meet the challenges of the climate crisis involves a fundamental rethink of how living and working spaces are designed and constructed. In addition, critical thinking is needed to address how services in South Africa are provided and how the majority of citizens can benefit from the vital transition from fossil fuel.

Eco-estates and alternative building technologies are not new to South Africa but, to date, they have been confined to the affluent sectors of our society. Behind high electric fences, wealthy households have gone off-grid, sunk boreholes and dug septic tanks, and become independent of failing municipalities and Eskom. In some cases, they have built beautiful homes of wood and stone, sandbags and cob.

Most working-class households are living in townships where they are dependent on the allocation of free basic services by dysfunctional municipalities. Those living in informal settlements aspire to be in formal housing, still provided by the government in the form of the ubiquitous RDP model of cement block houses with bulk electricity, water and sewerage infrastructure.

The Climate Justice Charter envisages a just transition in respect of where and how people live — what our government terms “sustainable human settlements”. This encompasses housing as well as services and facilities for living a “good life” in a healthy environment. If we are to meet the challenges of climate change, this involves so much more than retrofitting buildings for some element of solar power, or “greenwashing” in the construction industry.

It involves a fundamental rethink of how living and working spaces are designed and constructed, how services are provided, and most importantly, how these are done so that the majority of people benefit economically and socially from the transition away from fossil fuel.

The Climate Justice Charter notes in clause 4.8, which deals with eco-social housing, buildings and transition towns, that:

“Many existing homes are not designed to deal with climate extremes. Moreover, many are still homeless in our society while the rich have golf courses. We need to retrofit existing buildings and homes to handle more heat and weather extremes. Similarly, new homes must be designed as part of eco-communities, villages, towns, municipal rental schemes and cities where construction methods use natural materials, have minimal impact on the environment and provide for eco-social land needs of individuals as part of a community. Such needs are for housing, agroecological food production, sustainable water use, biodiversity, child-rearing and culture. Cement is not used in this context given its huge carbon footprint and has to be phased out as a building technology.”

There are some relatively simple and cost-effective steps that can be taken to effect this transition in how we provide housing and services. All housing, whether low-cost, social housing or new private housing, should be built using an energy-efficient design, with locally produced and non-cement based materials, and equipped with solar panels and water heaters, as well as gutters and tanks for rainwater harvesting. Toilets should be linked into the sewerage system in a way that uses grey rather than clean potable water.

Such designs have been developed and tested by the Fort Hare Institute of Technology, among others. About 10 years ago the institute tested an energy-efficient RDP house built of clay bricks which were made by a local women’s cooperative. Combined with the Enhanced People’s Housing Process model, which allows for locally owned construction cooperatives, such a model could provide both environmental and economic benefits for township residents.

In addition, the community-owned renewable energy model that is being piloted in KwaZakhele by Nelson Mandela University and elsewhere provides a decentralised energy solution to the current model. This will enable working-class townships to become producers, rather than consumers, of electricity. Such a model of cooperative energy production uses rooftop PV solar or decentralised PV solar arrays feeding into municipal grids.

It has the potential to not only meet the energy needs of millions of households, but to provide income to working-class households as owners of productive assets. The inevitable and necessary transition to renewable energy would become a means of economic redistribution, rather than a source of profit for the big energy corporations.

Regarding informal settlements, there are creative alternatives to the current RDP housing model which have been explored, using a circular layout of houses built with local materials around a common infrastructure to provide integrated energy, water and sanitation, using water capture, gas from waste, and providing inputs to food gardens as well as “minimum flush” toilets using greywater.

The principle of such models is that the quality of life of residents must be significantly improved and not compromised by the use of alternative technology. The model tested in the sustainable human settlements pilot project in Nelson Mandela Bay municipality also used sandbag construction technology, as this is a coastal area where sand is plentiful. The frames for the sandbags were constructed using lattices made from alien trees, cut down with the permission of the environmental affairs department as contributing to the programme of clearing of water-hungry alien vegetation.

If implemented effectively, such transition models have the potential to create a beautiful and highly functional living environment, with social spaces such as parks and recreation areas sustained through the local infrastructure and the labour of residents.

The residents benefit not only through living in this environment and from the improved services, but from income generated through their ownership of assets such as PV arrays, as well as through the sale of gas, vegetables, or recyclable waste.

Even small amounts of land, if used efficiently, can produce significant amounts of food. Support for cooperatives and fresh produce markets in townships is another fairly simple way that municipalities can contribute to the transition away from our current resource-hungry, highly centralised and fossil-fuel-based food system.

Green hydrogen the way to go

A further aspect of the transition township model involves transport. Affordable public transport is an essential element in overcoming the spatial social and economic disadvantages imposed by the history of apartheid planning.

Here, the commitment of the Department of Trade and Industry to the development of local hydrogen fuel-cell technology is to be welcomed. Minister Ebrahim Patel has already indicated the suitability of South Africa for hydrogen fuel-cell production, given the available resource of platinum group metals which are used as electrolysers to produce green hydrogen.

Green hydrogen, which is hydrogen produced through electrolysis using renewable energy, is particularly appropriate for public transport. Buses or trams can be converted to or constructed with this technology, and existing rail infrastructure can be converted to PV solar electricity, hydrogen or a mixture of the two.

While the economic model of this has not been tested on a large scale, there are indications from the UK (hydrogen-fuelled trains) and India (PV solar electric trains) — a comparable country — that this could work. Government investment in infrastructure would be well geared towards such new technology for transport, for freight as well as passengers.

While oil or gas, in the form of Karpowerships, offshore oil exploration and gas pipelines, may seem a good short-term solution to the energy crisis, the government would do better to think twice before investing in more fossil-fuel “big infrastructure”.

Instead, support to municipalities to establish community-owned PV solar systems would play a dual role: it has the potential to decentralise and increase the local energy supply, while also playing a redistributive function in the economy.

Putting these elements together — housing, services, transport, food — in an integrated and decentralised model premised on localisation, social ownership and sustainability in both environmental and economic respects enables us to envisage a just transition that is truly that.

It would be a transition to a society and an economy which meets the needs of all our citizens, and which moves decisively away from fossil fuels. These two transitions are not in conflict and nothing less is required. DM/MC

In a global first, South African pharmacists will soon be able to prescribe HIV treatment

"We all want things we can't have. Being a decent human being is accepting that." ~ John Fowles

Eye of the storm: Why devolution has the potential to bolster climate change mitigation and adaptation efforts in Zimbabwe