Disinformation, misinformation and barefaced lies: The online war of words in the Battle of Nkandla 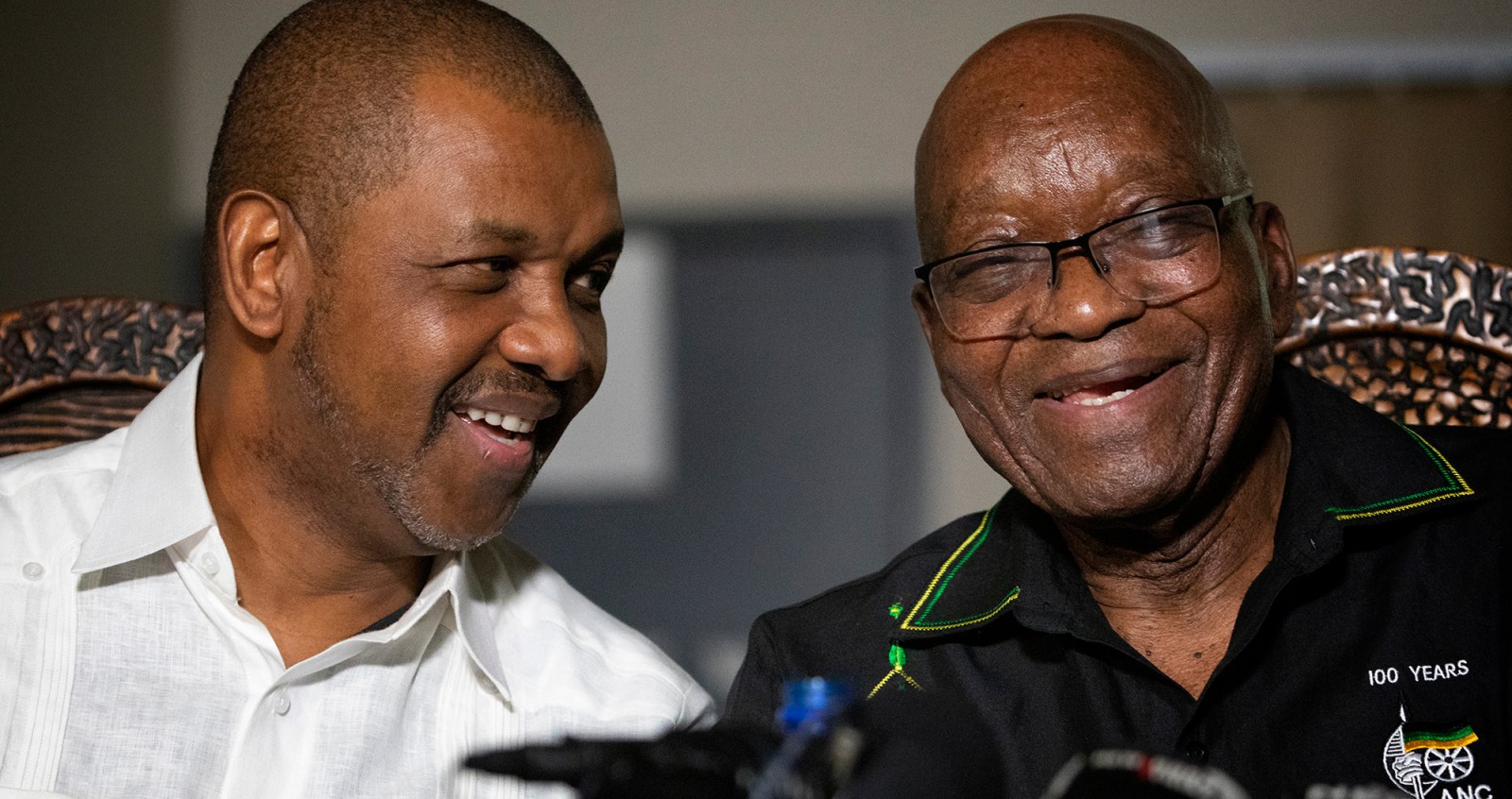 Jacob Zuma and his supporters have wrapped their campaign around one big misrepresentation, which they unashamedly put into the public discourse at every opportunity: That the former president has done nothing wrong and is being persecuted for political purposes. Tentacles of disinformation have been developed around the big lie to strangle the truth.

Molebogeng Mokoka and Praveen Naidoo are with the Centre for Analytics and Behavioural Change (CABC) at UCT.

Pushed into a corner by a 15-month jail sentence for contempt of court after refusing to appear before the Zondo Commission, former president Jacob Zuma came out fighting on the night of Sunday, 4 July 2021.

Surrounded by supporters who had gathered outside his Nkandla home to protect him from arrest, some firing gunshots into the air and vowing to defend him to the death, Zuma fired salvos of disinformation from within the heavily guarded compound, providing the ammunition to escalate a war of words on social media.

While amaButho flashed their weapons and marched in vibrant formation outside, the Battle of Nkandla was being waged with all the tricks of the trade to twist the truth from a media briefing within the homestead.

The Centre for Analytics and Behavioural Change (CABC) at UCT has found that social discord between Zuma’s supporters and opponents is rising sharply as the former president takes aim at the South African judiciary, President Cyril Ramaphosa and the Zondo Commission.

Zuma and his supporters have wrapped their campaign around one big misrepresentation, which they unashamedly put into the public discourse at every opportunity: that the former president has done nothing wrong and is being persecuted for political purposes. In fact, Zuma has refused to submit himself to the Zondo Commission, claiming that the judge he had appointed to lead the commission when he was president is now biased.

Tentacles of disinformation have been developed around the big lie to strangle the truth. Zuma went as far as saying that the apartheid government which sent him to Robben Island for a decade had not treated him and his family as badly as the current ANC-led government.

The head of Zuma’s legal team, advocate Dali Mpofu, sat straight-faced next to the former president as the disinformation and duplicity continued into the night.

Mpofu said he had been granted permission to address the media, but would not comment on legal issues. While the team used the opportunity to spread its own message, it quickly shut down any media questions that did not support its narrative.

For example, when asked by a member of the media whether he would be attending the next ANC National Executive Committee meeting, Zuma responded abruptly: “Is that your business?”

The question was perfectly legitimate: Zuma is a member of the NEC, but has not attended some recent meetings, an indication of the rift between him and his party.

Spokesperson for the Jacob Zuma Foundation, Mzwanele Manyi, warned a journalist who had asked another direct question not to be disrespectful: she had asked why Zuma and many of his supporters outside his home were not wearing masks during the Covid-19 third wave. Manyi later offered the reason for Zuma being unmasked: it may be due to a medical condition, which would be confidential, he said. He did not explain why he and Mpofu were also mask-less.

Clearly, the team wanted to control the messaging tightly as they played out the tactics of duplicity and disinformation:

Running parallel to developments at Nkandla, the online debate between supporters of Zuma and President Cyril Ramaphosa is heating up.

The CABC has been tracking the social media discord playing out between so-called “radical economic transformation” (RET) forces who support Zuma, Ace Magashule and others and those who support Ramaphosa.

In May this year, the CABC found that the “RET” network supports many officials implicated in corruption and is critical of anyone tasked with prosecuting them.

Within the RET narrative, the keyword “Zuma” racked up more than 40,000 mentions between 29 June — when the Constitutional Court made its ruling — and 4 July, when Zuma’s final day to hand himself over to the police was set.

The conversation around Zuma began to spike the day after Ramaphosa announced the move to lockdown Level 4 as the third wave of Covid-19 swept through many provinces — before the Constitutional Court’s decision was announced.

Within two days of Zuma’s sentencing, the conversation within the RET narrative had topped more than 50,000 mentions.

The biggest talking points were those including Zuma, Ramaphosa, the Zondo Commission as well as the Constitutional Court.

On 29 June, the Constitutional Court’s announcement of Zuma’s sentencing became the second-most engaged tweet within the RET narrative, with more than 350 users engaging, and @Diegochuene’s #AntiLockDownMarch coming in first with an engagement of 377.

With mixed reactions from those who applauded the highest court for its work, sub-narratives around judicial and racial unfairness began to emerge. 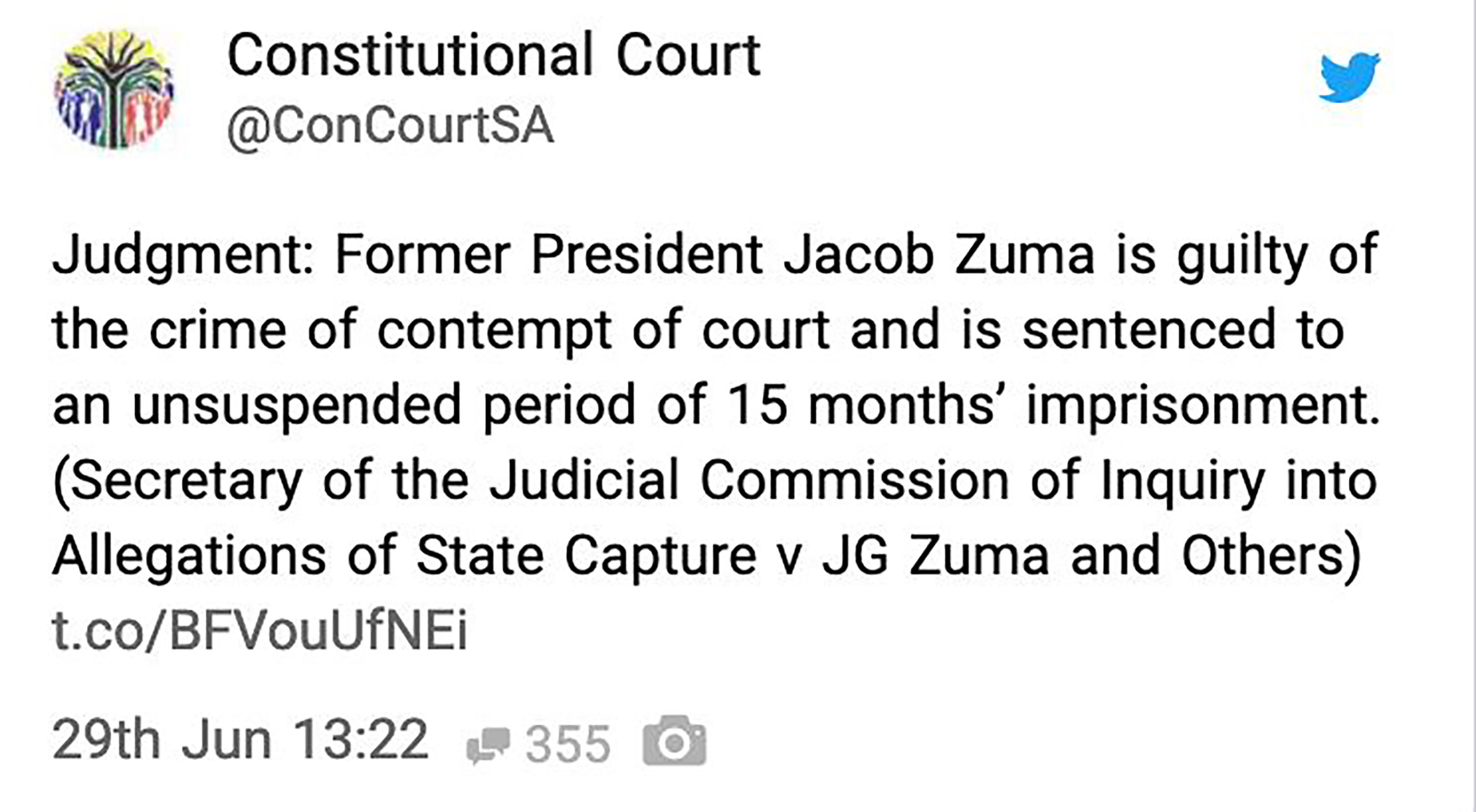 Zuma’s supporters overlooked his Zondo Commission transgression completely and diverted blame to his detractors, promoting narratives that compare the former president to other political figures such as former president FW de Klerk.

Conversation around De Klerk received more than 1,000 mentions, with more than half of these emerging on 29 June, the day the sentence was passed. 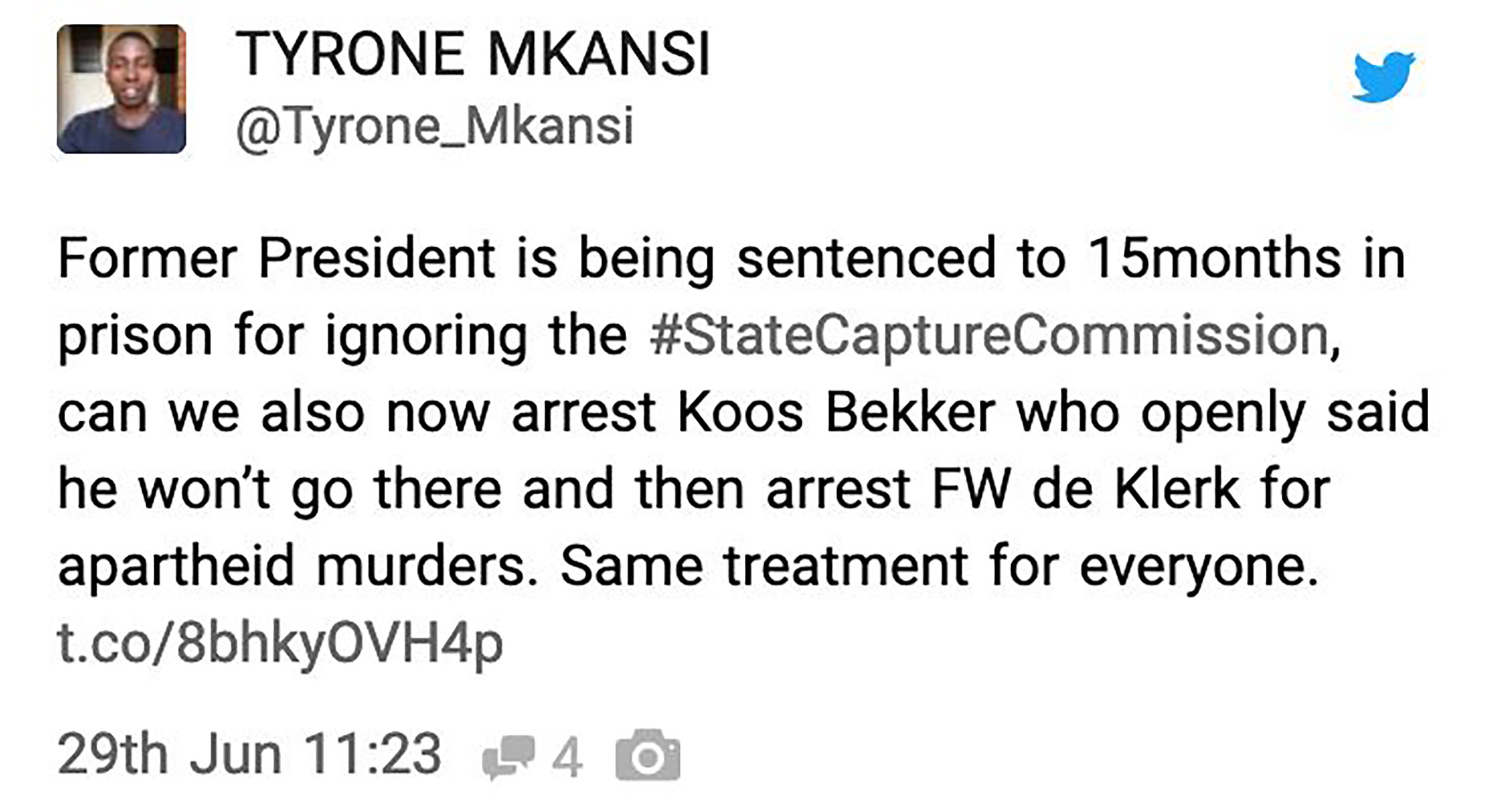 The diversion of blame continued after the Jacob Zuma Foundation released a statement in response to the Constitutional Court ruling, standing by Zuma’s claims over the “unfairness” of the judiciary.

The foundation said that the ruling was evidence that the Constitutional Court had failed to act “independently and without bias”, describing acting Chief Justice Sisi Khampepe as “judicially emotional and angry”.

Some Twitter users resorted to making unsubstantiated claims against Khampepe to manipulate the conversation, as @KingMntungwa did in one of the most popular tweets on 1 July,  below. 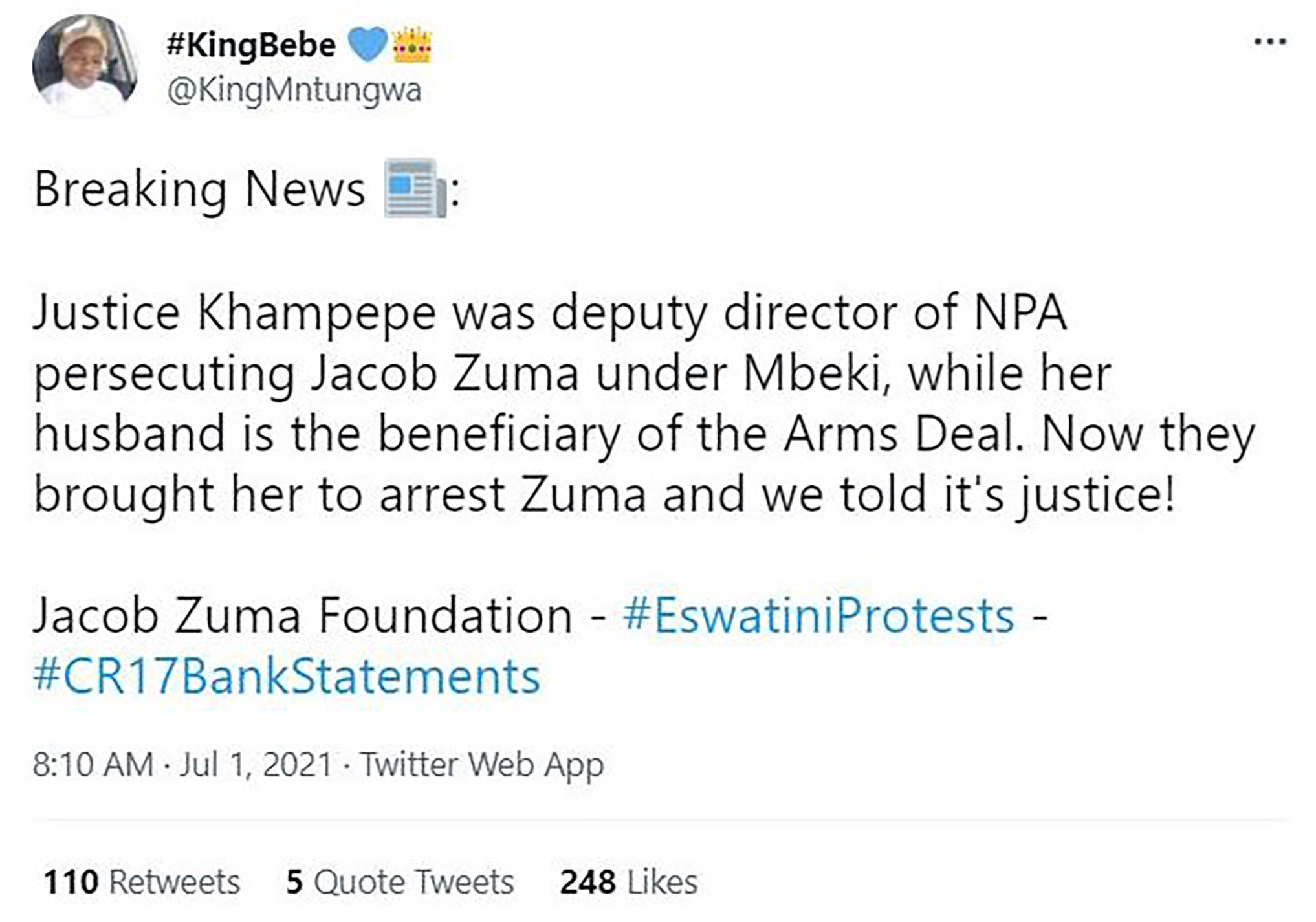 Hashtags such as #CR17BankStatements re-emerged after the Constitutional Court cleared President Ramaphosa of misleading Parliament regarding donations for his CR17 election campaign.

But the tweets that gathered the highest engagement were those that expressed mistrust towards Ramaphosa and the judiciary.

With an estimated volume of more than 30,000 this weekend, Nkandla has dominated the top of the trending list.

Zuma’s supporters, who had immediately made their way to his homestead following the court’s ruling, have caused chaos in defence of the former president.

Defying lockdown regulations as the country battles a third wave of Covid-19 infections, online conversation was divided around the role of the South African Police Service, which faced criticism for failing to control the large crowd at Nkandla.

Among the most engaged tweets was one by @kokotapianos, who questioned selective law-enforcement practices from police. 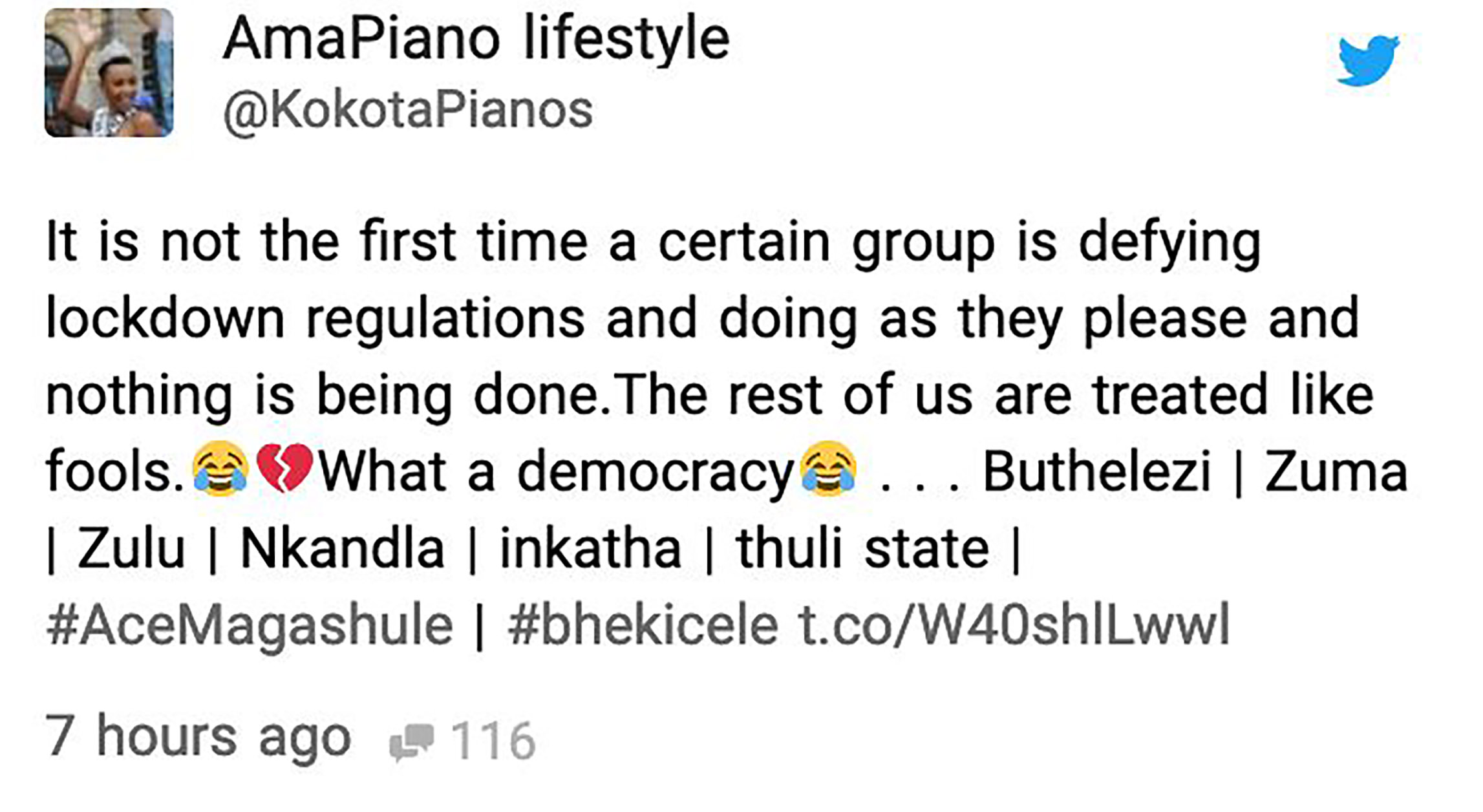 On Sunday, 4 July, mentions within the RET narrative had surpassed the 20,000-mark.

Accounts that were identified within the network of 51 pro-RET accounts were the main drivers of the pro-Zuma conversation on Twitter.

The account retweets any anti-Ramaphosa, pro-Zuma and pro-RET posts, especially if these posts emerge from the other 50 accounts within the network. 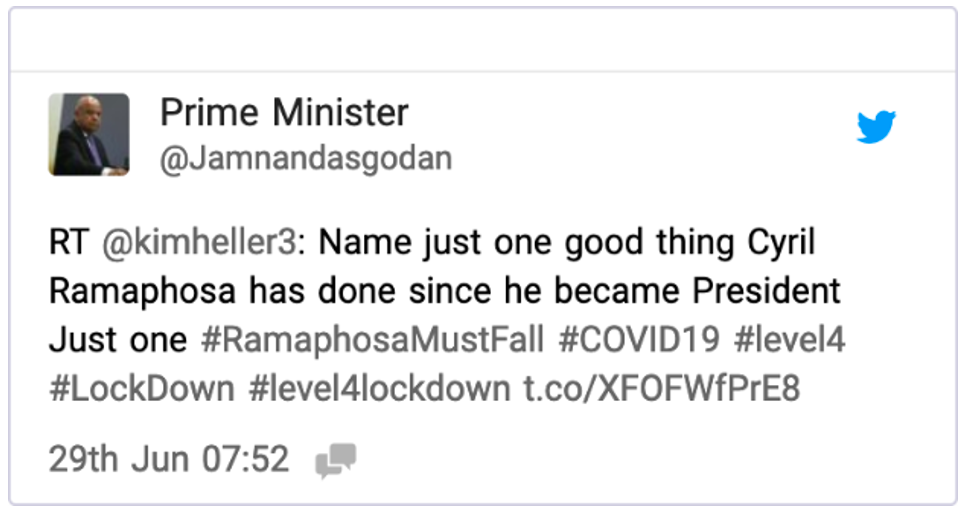 @BiyelaSthe is another account that topped mentions at 75 within the RET narrative on Sunday. This was also one of the 51 misinformation accounts on Twitter, with a majority of its posts being retweets.

While unsuspecting Twitter users engage with a high level of disinformation — mostly from a network fixated on supporting officials implicated in corruption — accountability and the rule of law are increasingly under threat.

When a former prisoner became president Nelson Mandela in 1994, South Africa basked in the glorious shift from corrupt oppression to liberation, protected by a new Constitution.

Now, with former president Zuma facing the prospect of becoming a prisoner again, that very Constitution is in grave danger as the rule of law and the judiciary it supports comes under unprecedented online attack. DM 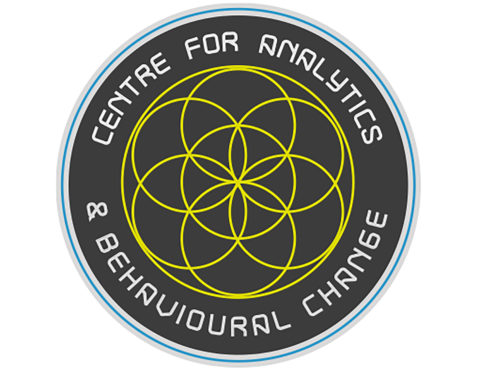 The Centre for Analytics and Behavioural Change (CABC) is a non-profit organisation based at UCT’s Graduate School of Business and incubated by the Allan Gray Centre for Values-Based Leadership. It was established to track and counter mis- and disinformation, fake news and divisive and polarising rhetoric that is promulgated online to undermine social cohesion, democratic integrity and the stability of nation-states.