Goolam Rajah played a fine innings for the Proteas and... 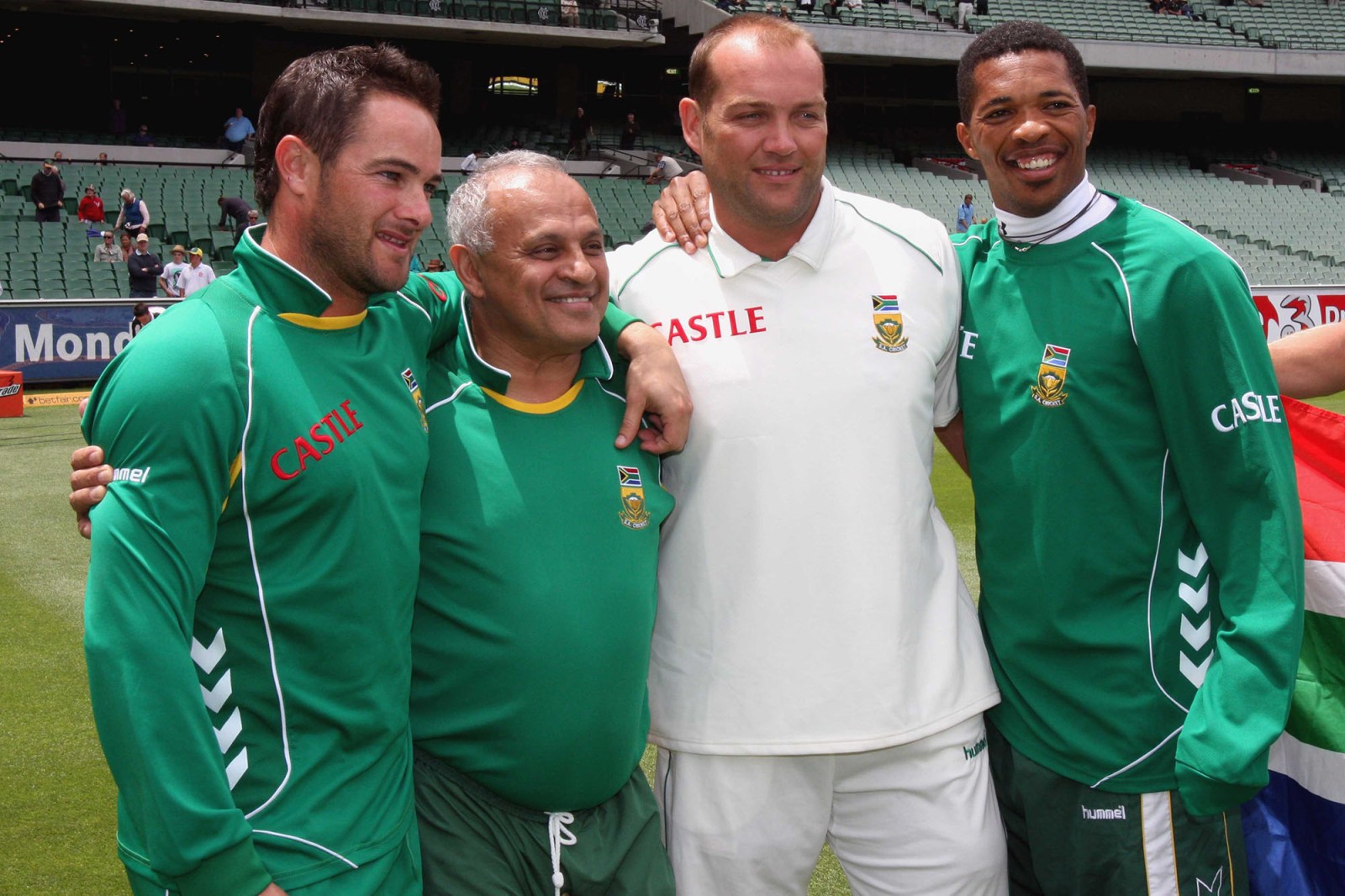 Mark Boucher, Goolam Rajah, Jacques Kallis and Makhaya Ntini celebrate after South Africa had won the series during day 5 of the Second Test between Australia and South Africa at the MCG in Melbourne, Australia on 30 December 2008. (Photo: Tertius Pickard / Gallo Images)

South Africa cricket lost one of its most influential servants on Tuesday. Former Proteas team manager Goolam Rajah succumbed to complications arising from Covid-19 this week.

For the better part of two decades, there was one constant in any camera shot of the Proteas’ balcony during a game — Goolam Rajah. He served as the Proteas team and logistics manager at various times and was also an influential figure in post-unity cricket in the country. When he retired in 2011, he famously quipped that not one piece of luggage ever went missing on his watch.

For the past two months, he fought for survival against Covid-19. He was on a ventilator for most of that time, but sadly his fine innings came to an end at the age of 74.

Rajah presided over 179 Tests, 444 One-Day Internationals (ODI) and 40 T20Is with the Proteas and he worked with nine Proteas coaches from November 1992 on India’s historical first tour to South Africa, to Australia’s October/November visit in 2011. It was a staggeringly long and accomplished second career for the trained pharmacist.

Rajah’s passion for cricket was fuelled at the University of Leicester where he studied his pharmacy degree, as he was unable to obtain the degree in whites-only universities in apartheid South Africa.

To the Proteas, he was much more than part of the management team. He was a friend, confidant and adviser. In total, 107 players represented the Proteas during his time in more than 600 matches across the three formats. They will all remember him with great fondness and gratitude.

“I was an ordinary person just doing my job,” Rajah said in a recent interview on SuperSport. “Maybe for 20 years, I was the cheapest guy they could get.

“When I took on the job I realised that it was not about me. It was about the team and therefore you have to stretch yourself that extra mile to make a difference.”

He personally considered his greatest achievement was to be invited by the International Cricket Council (ICC) to manage the World XI against Australia, the No 1 team in the world at the time, in a one-off Test match.

“It is a very sad day for the South African Cricket Family,” said CSA acting chief executive Pholetsi Moseki. “Goolam was a very special human being who has touched so many lives in a positive way in the 30 years we have enjoyed being a democratic cricket organisation.

“We all have our special memories of him which we will treasure. He was truly a man who gave a great deal to the game of cricket and to everybody involved in it.

“I extend our deepest condolences to his wife, Shaheda, popularly known to us all as Poppy, his children, Mohammed Faeez and Zuraida, his extended family, his friends and colleagues both in the game of cricket and in the wider society,” he concluded.

CSA chairman Lawson Naidoo paid tribute on behalf of the CSA board. “One can never have a successful team without a good administration behind them. Goolam played a major role in making sure that they were not sidetracked by off-the-field issues.

“During his tenure the Proteas enjoyed significant success, winning the ICC knock-out trophy (the precursor to the Champions Trophy) and the Commonwealth Games Gold Medal in 1998, achieving their best World Cup result with a tied semi-final against Australia in 1999, winning a Test series in England in 2008 and a first-ever Test series win in Australia later the same year. These achievements speak for themselves.

“He was a humble man and a true servant of the game.”

CSA director of cricket Graeme Smith, who was also captain alongside Rajah for nearly nine years, paid tribute on behalf of the players.

“Goolam was a true father figure who looked after the players like his own. He took care of everything with such detail that the players were able to focus totally on cricket and that was why his tenure was so successful,” Smith said.

“The players were particularly appreciative of the way he looked after their wives and partners on away tours. We will indeed be fortunate to see his like again.”

CSA President Rihan Richards spoke on behalf of the Members’ Council. “His service to the game was legendary and exemplary. He was a role model for all to follow although almost impossible to emulate. We thank him and pay tribute to his family who had to manage without having him at home for long periods of time.”

Rajah was also an honorary life vice-president of the Central Gauteng Lions (CGL).

“There are no words that can accurately describe my extreme grief right now — and I believe that I speak for thousands within the cricketing community when I say that we’ve lost a once in a lifetime individual,” CGL chief executive officer Jono Leaf-Wright said.

“Upon reflection, I don’t believe I’ve ever heard a bad word spoken of Goolam: He always went above and beyond and cricket is a greater sport because of him.

“The ever-giving, quietly spoken man will be forever remembered and treasured by all of us at Central Gauteng Lions, Imperial Wanderers Stadium and no doubt the cricketing community at large. May you rest in peace uncle Goolam.”

Dr Mohammed Moosajee, who was tasked with fulfilling Rajah’s position when he retired from the Proteas, said he was a remarkable man and exceptional human being who served the game and his country with distinction.

“He was extremely kind, really caring, always friendly and most helpful. He touched the lives of all that he encountered, which is why the players loved him so dearly,” Moosajee said. “Goolam was justly recognised by the ICC when he was appointed Team Manager of the World XI in Australia in 2005. Goolam was a dear and close friend who will be sorely missed.” DM