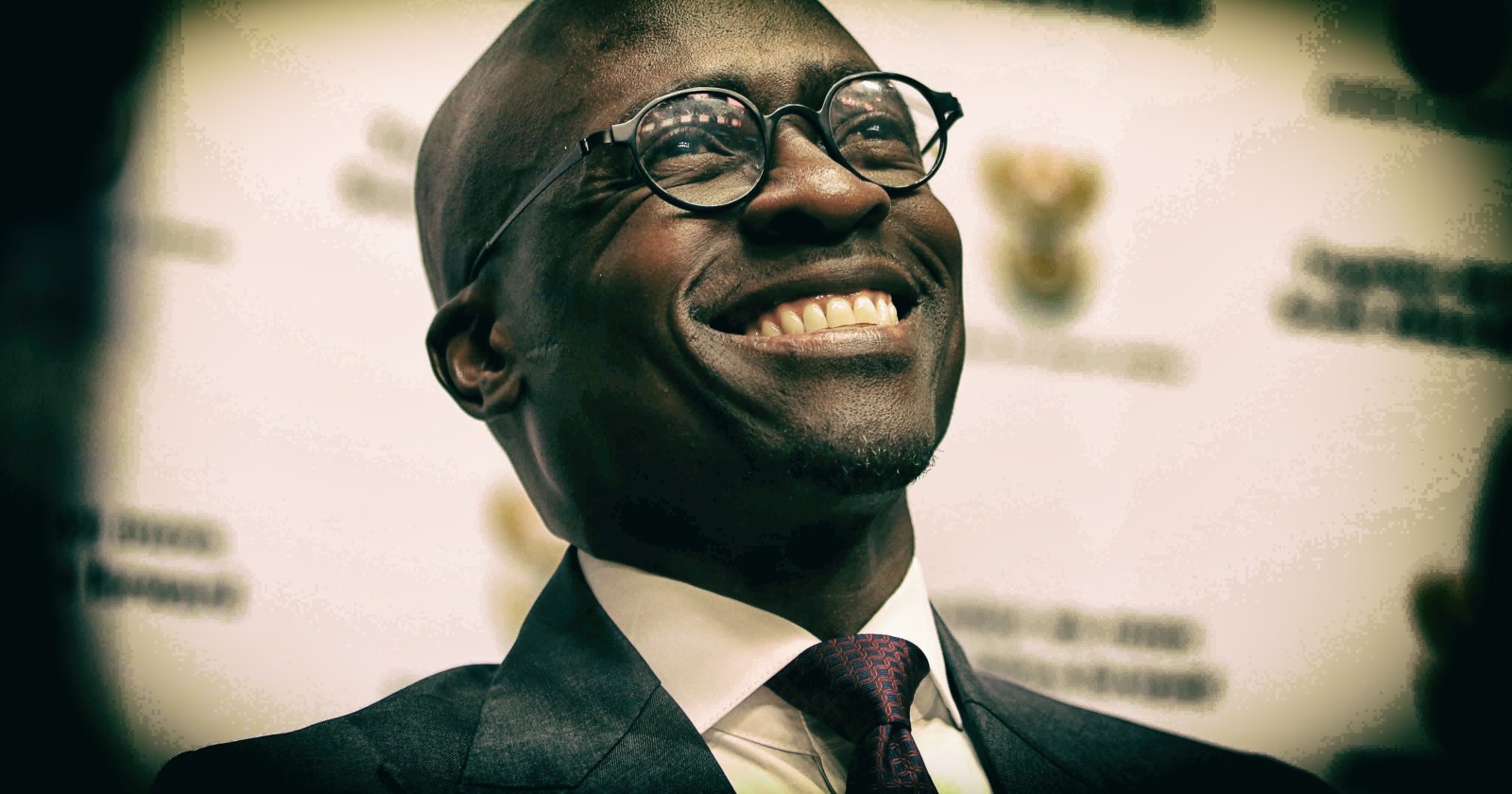 Malusi Gigaba is an artful dodger who chose subservience and flash over intelligence, potential and integrity.

The “10 lost years” under Jacob Zuma’s leadership of the ANC and the country compromised many political talents who could potentially have left a legacy and made their mark on post-apartheid South Africa. Malusi Gigaba is one of those casualties.

There is no doubt that Gigaba is a gifted politician. And while this might pass for a glowing assessment of a man once viewed by many in the ANC as potential presidential material, it speaks more to Gigaba’s capacity for compromising on principle and integrity en route to the political Big League.

It’s a greasy pole – politics – as British prime minister Benjamin Disraeli noted in 1868. And to “make it” up the pole requires an inflated sense of self-importance, the ability to perform moral and ethical gymnastics and to be in possession of a flexible spine.

These are all talents Gigaba possesses in spades. Talents easily exploited by those more cunning and powerful than the young minister.

Anyone watching Gigaba’s recent adept verbal shadow-boxing at the Zondo Commision of Inquiry will agree he is smooth, intelligent, quick-witted and experienced.

Had he not been so ambitious, so fond of shiny things or so politically pliable, he might have made a notable contribution to post-apartheid South Africa.

It was also clear at the Zondo Commission that Gigaba himself has come to believe his own narrative and in his innocence.

He did nothing wrong; it was the duty of advisers and others below him in the pecking order to bring matters to his attention as minister of public enterprises, especially matters that threatened the integrity of the state that he felt for so deeply under those gorgeous suits.

“How else am I supposed to find out?” he protested on several occasions.

Gigaba is a sterling example of Indian author and teacher Professor Shrikant Prasoon’s notion of the political sycophant.

“… a sycophant, flatterer is an intellectual person; a good judge of nature and situation; possesses presence of mind; has command over certain words; well-rehearsed way of presentation; a mellifluous tongue and immense patience to wait for the right moment. They rehearse their words many times silently before uttering them.”

That was Gigaba at the Zondo Commision. He was back in the hot seat to answer serious allegations from 18 to 21 June.

Gigaba, once close to president Thabo Mbeki, soon bent easily with the political winds when Zuma’s malevolent star began to rise and shine.

Gigaba’s remarkable trajectory into several key ministries that could facilitate the hijacking of the state is evidence of his perceived usefulness rather than a manifestation of respect for his political smarts. His rise was celebrated with great fanfare in the rising ANC ranks.

We have since come to learn, however, that, behind the scenes, Gigaba was viewed as a tool, a man without any real gravitas. So much so that he developed migraines trying to ward off all manner of demands from former Zuma henchwoman SAA board chair Dudu Myeni, and approaches by the Gupta family and its associates.

Deputy Chief Justice Raymond Zondo and the public heard that Gigaba had sat silent while the Gupta-linked Jet Airways chairman, Naresh Goyal, humiliated SAA executives before and during a 2011 meeting.

First Goyal kept a newly minted minister, his deputy, Ben Martins, and SAA executives waiting for two hours, then he tried to strong-arm them into surrendering the Joburg-Mumbai route. As former SAA CEO Sizakele Mzimela testified, Goyal had done so while Gigaba sat silently like a sparkly big rain spider jangling some of the keys to the kingdom in his bespoke trouser pocket.

His silence, said Gigaba, had been merely to encourage SAA to find a “win-win” deal with Jet Airways.

Whatever happened between SAA executives, Mahlangu and Goyal had nothing to do with him, said Gigaba.

Gigaba’s slipping in and out of the coils of public accountability was less repulsive to watch than the sweaty manoeuvrings of the former minister of security, David Mahlobo, at the commission.

Mahlobo sought to sail through damning testimony against him with a “sorry it’s classified” and conjuring up a comic-book version of the intelligence world where even your wife could be a spy and everyone was watching everyone else.

Gigaba, by comparison, was a bird of beautiful plumage with a song pleasant to the heart and mind. You so want to believe him, but you see the gaping holes in his defence.

Gigaba, as the thrice-elected leader of the revived African National Congress Youth League (ANCYL), shone at some point like a black diamond in the political firmament. He was, to many, the future of the ANC.

Ask any student activist. In fact, ask anyone who orbited Gigaba as his star rose.

It was under his robust leadership that the ANCYL began to play the influential canary in the coalmine for an ANC led by Mbeki. Whatever needed to be discussed, Gigaba would drive the debate.

As Zuma tightened his grip on the levers of the state, shuffling Cabinets so often no one could really stop the conveyor belt of cash leaving the fiscus, Gigaba remained in the picture.

Zuma’s appointment of Gigaba in 2017 to the key portfolio as minister of finance after firing Pravin Gordhan and deputy minister Mcebisi Jonas on the basis of an as-yet-unseen “intelligence report” solidified Gigaba’s status on the front lines of the capture of the state.

By February 2018 Gigaba was out as President Cyril Ramphosa shuffled him back to Home Affairs before Gigaba eventually resigned as minister and as an MP.

Gigaba remains on the National Executive Committee and is paid a hefty salary (when there is enough in the coffers, we assume) by Luthuli House in his capacity as a member of the governing party’s policy unit.

Gigaba is a smooth operator. His messy personal life and relationship with women attests to this. A known player, Gigaba allegedly texted an ex on the day he married Norma Mngoma. This according to the former side affair, that is.

Testifying at Zondo, Gigaba sought to tarnish his wife and the mother of two of his children, saying she was an accomplished liar. This had become evident, he said, when shortly after their highly public and costly wedding he had found out that Mngoma’s alleged “late” father was not a tycoon in New York but in fact Mngoma’s ex-fiancé.

What happened to due diligence?

Not many of the “young lions”, contemporaries of Gigaba in the student movement and later in the ANC, have covered themselves in glory or stand out as role models for future generations.

Current Minister of Transport Fikile Mbalula has also bent like a sapling in the political winds, one minute dancing on stage celebrating Zuma’s defeat of a no-confidence vote, flip-flopping the next on almost every issue from Ace Magashule to Ramaphosa. Mbalula was Gigaba’s deputy in the Youth League.

Although Mbalula is a hard worker, he has always lacked personal gravitas. It was Julius Malema who followed Mbalula to lead the ANCYL, which today limps along like a flightless big bird.

And Malema is Malema.

The tragedy of Gigaba is one that is self-made. In so doing he robbed himself of an opportunity to create the SA he allegedly fought for as a fiery young revolutionary.

The tragedy too of the ANC is self-made and no amount of dangling on the political hook denying it all will wash any more. We need only look around us to see the forever-tarnished legacy.

Gigaba’s inevitable downfall should serve as a lesson to all who enter politics: if you check your ethics and morals at the door, you eventually get shown that very door. DM168