Letter from Mpumalanga: The adoptive tribalists of Shiy...

Letter from Mpumalanga: The adoptive tribalists of Shiyalungubo Dam 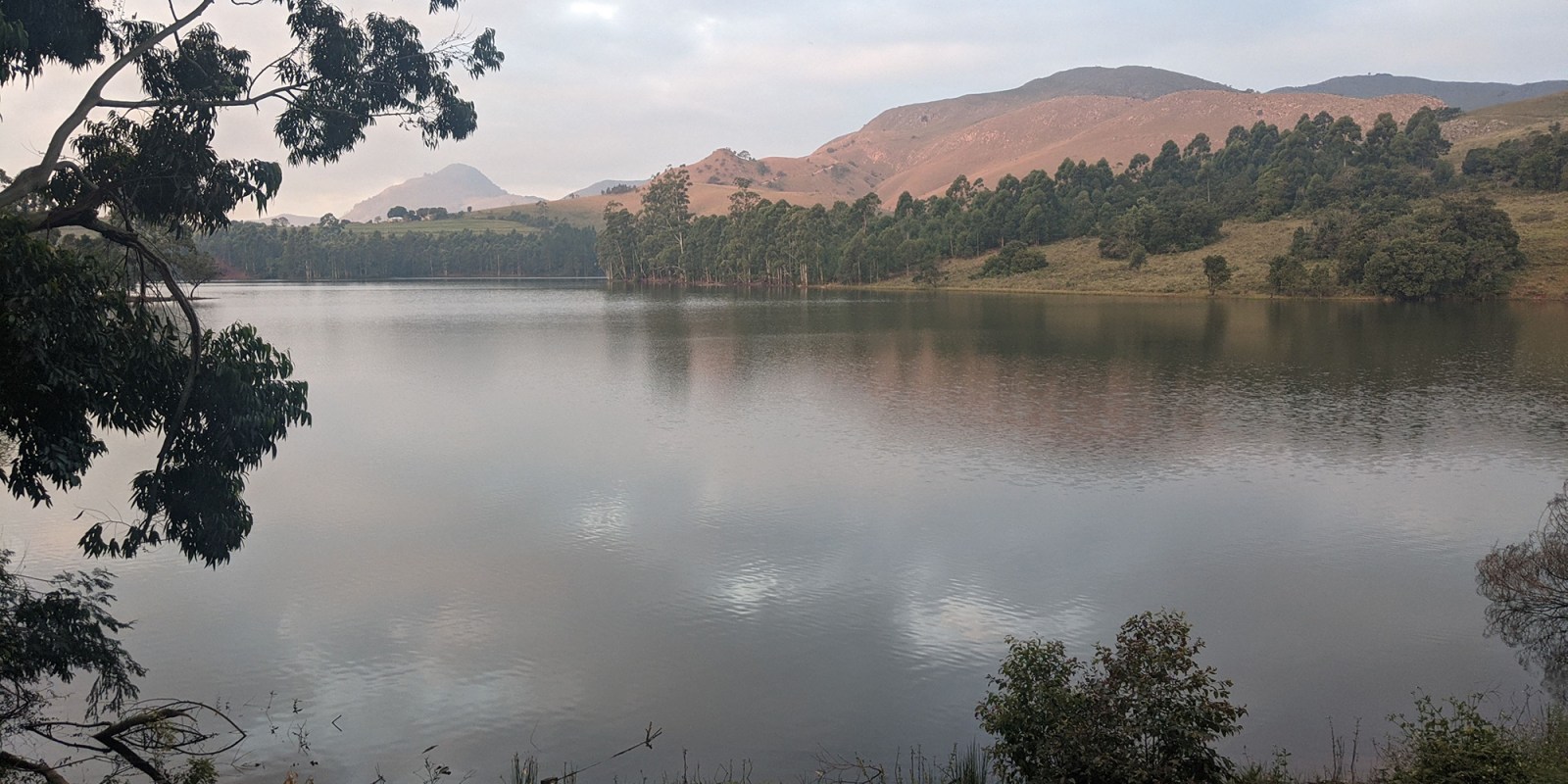 A sunny Saturday morning and a half dozen of the adoptive tribalists of Shiyalungubo Dam are gathered on the closest thing to a local beach. Bluegum trees, shimmering blue water, a grassy shore with canoes pulled up at a storage rack, and all around us the rolling green, wild Makhonjwa mountains. I don’t blame anyone for falling in love with this place.

Glen Retief’s The Jack Bank: A Memoir of a South African Childhood, won a Lambda Literary Award. He teaches creative nonfiction at Susquehanna University and is spending a year in South Africa as a Fulbright Scholar.

Different stories circulate about the name, “Shiyalungubo”. In the most popular version, the dam, which was built in 1938, lies on the precise spot where, in the 19th century, down-slope travellers left their blankets for others who’d need them for the high country.

In other words, for a long time the dam has been known as a place for throwing off one’s familiar security blankets, urban middle-class or otherwise.

Also, it has been a symbol of what we today might call the “sustainable, sharing economy”: the idea that if we collectively apportion resources and co-operate, we’ll be able to live lighter on the Earth and better adapt to our changing planet.

Today, in addition to a traditional Swazi village, Shiyalungubo also houses a collection of 45 or so modern former urbanites, who have, to greater or lesser degrees, pioneered the kind of transition that many economists and climate scientists tell us will be needed in the future: small-scale gardening, rainwater tanks, solar panels and neighbourly collaboration rather than reliance on government and corporations.

Now, this morning, Lara Langeveld, our host, beckons us across.

“Welcome!” she says. “You’ll find us a friendly bunch.”

Which indeed they are: Wilton, a former liberation activist and politician, Justin, a retired painter and Tereasa, Lara’s younger sister and an investigative journalist.

Lara and her late husband, Karl, were the first migrants. To hear Lara tell it, she embarked on this road to adoptive tribalism after confiding in her domestic helper about how she was struggling to pay the bills in suburban Nelspruit.

“But Lara, you flush away money every time you sit on the toilet,” retorted Gladys, memorably, a reference to the takeaway pizzas Lara was fond of ordering.

“Come with me to meet my chief and you will hear how you can join the Swazi nation and live much more cheaply.”

Lara was intrigued. After a few false starts, including an urban township holding that didn’t interest her, she asked the chief if he had any plots available in the countryside, especially near water, where her husband, an avid angler, might toss in a line.

They moved to Shiyalungubo in 2015.

Now, Lara pays R600 annual tribute for a house and two cabins, which she sublets for tourists. In return for this, the tribal council asks her, in the words of the local chief, to be “our white Swazi” — in practice, liaison between the established tribe and the newcomers.

Wilton, the former politician, simply wanted to retire to the countryside. After the hubbub of public life, he longed for peace and quiet. He also wanted to become more self-sufficient.

“If you think the pandemic messed with global supply chains,” he told me, “wait till you see what climate change does.”

But there was also a problem. As a political person, he understood that there was a very real possibility of land expropriation without compensation.

So where, Wilton wondered, was there the least chance that he might be kicked off whatever land he might rent or buy? The answer, he felt, lay in the South African Constitution, in section 25(6), which guaranteed land tenure to those whose possession had been made tenuous by past discrimination — in other words, tribal areas like this one.

In the case of Justin, the painter, fear of crime seemed to have been the chief motivation to relocate.

“Soon they’ll be coming over the wall,” he told my husband.

Justin’s sense seemed to be that in Africa, white wealth would always be regarded as illegitimate because of colonial history. Much like Wilton, he saw adoptive tribalism — choosing, as an adult, to affiliate with an African traditional community and abide by its communal ownership law — as a kind of self-protection.

Living here on the cheap, as a retiree, was also good for Justin’s painting hobby.

Tereasa is writing a book about the Makhonjwa mountain region and its history. When Lara and her husband first moved here, Tereasa had been worried about Lara. You don’t cover human trafficking and poaching syndicates for the newspapers without developing some paranoia about safety.

Today, though, she seems as happy here as the rest of this company.

None of this motley crew seemed to regret the move into adoptive tribalism, though. I pushed hard to get at the disadvantages. What about tribal obligations, like improving land that isn’t yours?

“The rent is so cheap, it’s reasonable to ask us to build and maintain our own houses.”

What about the hassle of shopping, at least an hour away for as little as a jug of milk?

“Living here requires commitment and teamwork,” was Wilton’s reply. “But the rewards are enormous: rich relationships with your neighbours… a wonderful quality of life.”

Okay, then, how about the lack of health services? Lara lost Karl to a heart attack due to the long wait for an ambulance to make it up the rocky mountain pass.

“But here’s the thing… Karl completely came to life here before he died,” Lara told me. “He read, fished, gardened. He was happy!”

What about the local tribe? Do they ever resent these newcomers? It seems not. Gideon, a local who works on service delivery for the tribal council, assured me: “These neighbours of ours are definitely wanted. They bring jobs, and more than that, they bring us exposure to the world.”

On a more practical note, the tribal council is also lobbying Mpumalanga public works to fix the access roads so they can build a tribe-owned hotel, and then leverage the settlers’ presence to attract tourists.

I had to pinch myself. Everything seemed so benign in Shiyalungubo. A cheap, beautiful, often artistic existence. Zero crime, thanks to the tribal council, and as a result, no police or prisons either. Happy, healthy people all living together in neighbourly harmony, with everyone benefitting. What was I missing?

Even the name itself provided a cautionary note. Gideon, among others, suggested the blanket-dropping story was just an idealistic, communitarian fairy tale. Instead, he told me about an adulterous Swazi queen who left behind her blanket when she fled her husband’s wrath.

Two things did seem true about Shiyalungubo: first, it is still early days for the settlers. Lara has only been here for six years; most of the other inhabitants arrived in the last two to three years.

Second, it seems inevitable that more communities like this will be springing up around South Africa — mini-Coffee Bays or Modimolles. Between rural communities’ need for tourist rands and middle-class desires for country living, cohabitation arrangements like these seem logical.

As for how places like these might also prove de facto eco-villages; laboratories for more sustainable modes of living — that, too, seemed an unanswered question, as we drove back home past the newly installed power lines and along the dam wall that forever altered the course of the winding Shiyalungubo River. DM