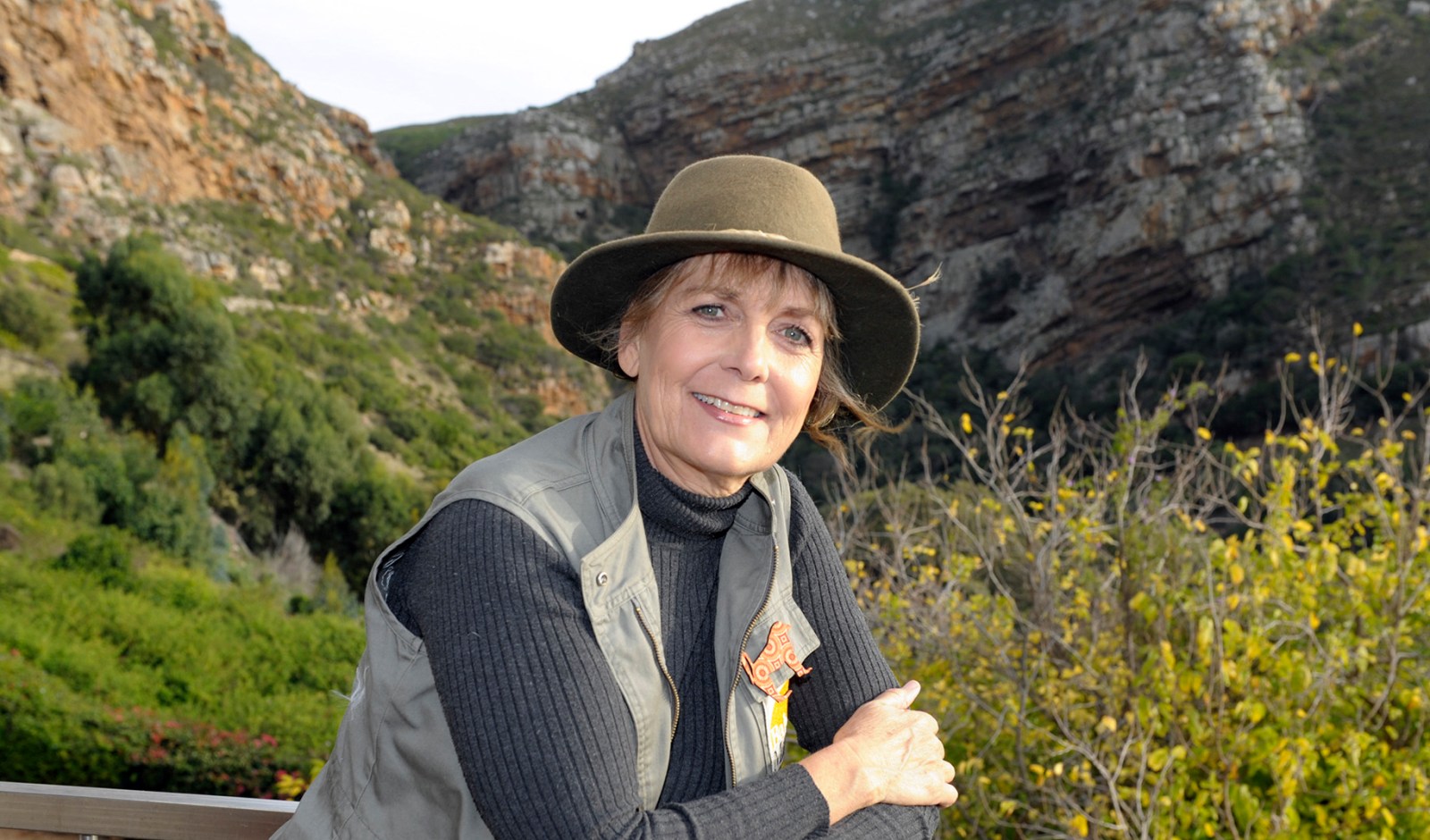 Jenni Trethowan, the founding member of Baboon Matters Trust, has spent the past 30 years advocating for practical, sustainable methods to manage the interface between baboons and humans. She is pictured at Admirals Kloof, Simon's Town. (Photo: Joyrene Kramer)

It’s been 30 years and still Jenni Trethowan is fighting for baboons and people to co-exist peacefully in Cape Town — and South Africa.

Trethowan, founder of the NGO Baboon Matters, insists that baboons are not interested in people — only in our food. She explains that increased human sprawl has seen people encroach on baboons’ habitat; a situation exacerbated by wildfires destroying their natural food and water supplies, sending increasing numbers of wild animals scavenging for meals in gardens, bins and even inside houses. The solution? Better waste management, she says.

Discourse peaked on 8 April when the City of Cape Town put down a “raiding” baboon named Philemon. According to City officials, Philemon entered homes with people inside more than 10 times in February alone. Activists, including Trethowan, were devastated by the killing.

A furore erupted in 2020 around another “problem” Cape Peninsula chacma baboon known as Kataza, that was relocated from his home troop in Kommetjie across the mountain to Tokai and then, in January 2021, to a Limpopo wildlife rehabilitation centre.

“I’ve always had huge empathy for animals and especially underdogs,” says Trethowan. “And that is why I find the baboon situation so distressing, because baboons are very much the underdog, considered as vermin and pests and problem animals, herded with paintball guns and killed.”

Trethowan’s supporters range from British primatologist Dr Jane Goodall to animal ethics scholar Dr Elisa Galgut of the University of Cape Town. Galgut, a Baboon Matters trustee, was instrumental in ending the university’s use of wild-caught baboons in research.

On the other hand, Trethowan’s detractors have accused her of humanising primates, of holding hands with baboons and chanting “kumbaya” on mountain tops.

“Nonsense,” says Trethowan. “Baboons are baboons, they’re doing their thing. Baboons don’t want to be human. They are not interested in being friends with us, or being friends with me, despite the fact that I worked damn hard for them for 30 years.”

She adds that giving baboons human names is for identification purposes.

“It’s easy when I’m communicating to just say, for example, ‘George’. Some of the service providers and the scientists said we should give them codes. For example SK14. But how do you remember that? Is he 14, 15? No, he’s George. Does George recognise his name? No, he doesn’t. He’s not interested in any of our human nonsense, but we’ve got good food, which he’ll take advantage of.”

Trethowan is speaking to Maverick Citizen in Cape Town’s deep-south village of Kommetjie, at a coffee shop named Good Riddance. Sipping hot water, she is wearing a sweater with two cartoon baboons on the front, and the words: “You had me at Waaho.”

It appears that Trethowan is well known in the area, as several passersby nod and wave at her.

While we speak, a woman walks over to our table. “Jenni, let me show you what the baboons did at our place,” she says, scrolling on her phone. “They are there every day. Look, they have destroyed my herb garden. Here they’re eating lemons off my lemon tree.”

As the woman retreats, Trethowan continues: “So, people want to live near this beautiful natural park [Table Mountain National Park]; they move here because they want to be close to the beaches, to the mountains, in nature, but then they’re not really adapting to what it takes to live here. They need to take responsibility; a lot of it is just common sense.”

Trethowan’s tone is gentle, but her eyes have a steely glint. She relays how lions and leopards once roamed Cape Town’s mountains. The wild cats have left and lately, only about 500 chacma baboons remain. With their historic migration routes cut off, these baboons are essentially an island population. With nowhere to go, they have learnt that human settlements present easy feeding opportunities.

“I can’t deny that they’ve become a problem in some areas — there are plenty of stories of baboons snatching sandwiches from tourists at Cape Point and raiding rubbish bins in Scarborough,” she says. “But I’m equally convinced that it’s up to us to find a human solution to the problem that humans have created.”

Born in Zimbabwe, Trethowan has lived in Kommetjie since 1984. She relays how in the late 1980s, baboons and residents started to clash, leading to authorities exterminating the entire Slangkop troop in 1990. At the time a housewife and mum of two boys — without scientific training — she co-founded the Kommetjie Environmental Awareness Group, the precursor to Baboon Matters.

“We had a lot of orphan baboons and hurt baboons coming through our house,” says Trethowan. “One little baboon had her limb amputated from an electrocution, so she was really badly injured. She stayed with us for a while, a few weeks. We named her Sparky, from the electrocution. When we released her she went straight back to her troop. I’ll tell you something, it is the most joyful thing you’ll ever see, when a baboon returns to its troop. She was gone, baby, gone. It’s important to note that none of the baboons we looked after ever gave me the time of day again after being released. I didn’t get a Jane Goodall moment, you know, where they come back afterwards to give me a hug.”

Sparky was released in 2008. Three years later Trethowan was heartbroken when authorities killed her for being a “raiding baboon”.

Another incident etched in her mind was when she saved three baby baboons poisoned at a local factory. Trying to comfort and save the small vomiting baboons, Trethowan ingested poison too, ending up in hospital where she nearly died herself.

Then there is the anecdote of a young male called John Wayne, which she chased around Cape Town for seven days: “I eventually caught up with him on a container ship in the city’s harbour. I followed John all the way to the top of the ship, with a crowd of sailors and policemen watching. After staring at each other for a few minutes, I said: ‘John, my boy, you’re now really between the devil and the deep blue sea. Either jump into the water or you come with me.’ John considered this for a moment and then followed me down the ladders and got into the cage — to the astonishment of the vet who arrived to dart him.”

Over the years Trethowan has featured in news reports around the world. Responding to a comment on her movie-star cheekbones, she shrugs: “Yes, people say I have a familiar face.”

A big problem, says Trethowan, is murky accountability. In 2016, the City of Cape Town applied to the Western Cape High Court for a declaratory order setting out the baboon management responsibilities of different state organs: the minister of environmental affairs, SANParks, CapeNature and the Western Cape government. In court papers, the city council said it was spending R10-million a year on baboon control. But in a 20-page judgment — forwarded to Maverick Citizen by Trethowan — Acting Judge Leslie Weinkove ruled that it was not the court’s duty to compel such a protocol agreement.

Meanwhile, Trethowan says she is fielding calls from around South Africa, notably Sabie and the Garden Route, consulting with farmers and residents about baboon-proofing homes and perimeters.

In a country where the majority of the population live below the breadline, is there room to lobby for animal rights?

“I’m very well aware that there are lots and lots of issues in South Africa,” says Trethowan. “From homeless people to abused women. While I don’t address those issues directly, it doesn’t mean I don’t care deeply about them. But I decided to focus on one issue though, where I can make a difference. So yes, my little NGO is specifically for a species who I felt had been incredibly persecuted for too many years.” DM/MC