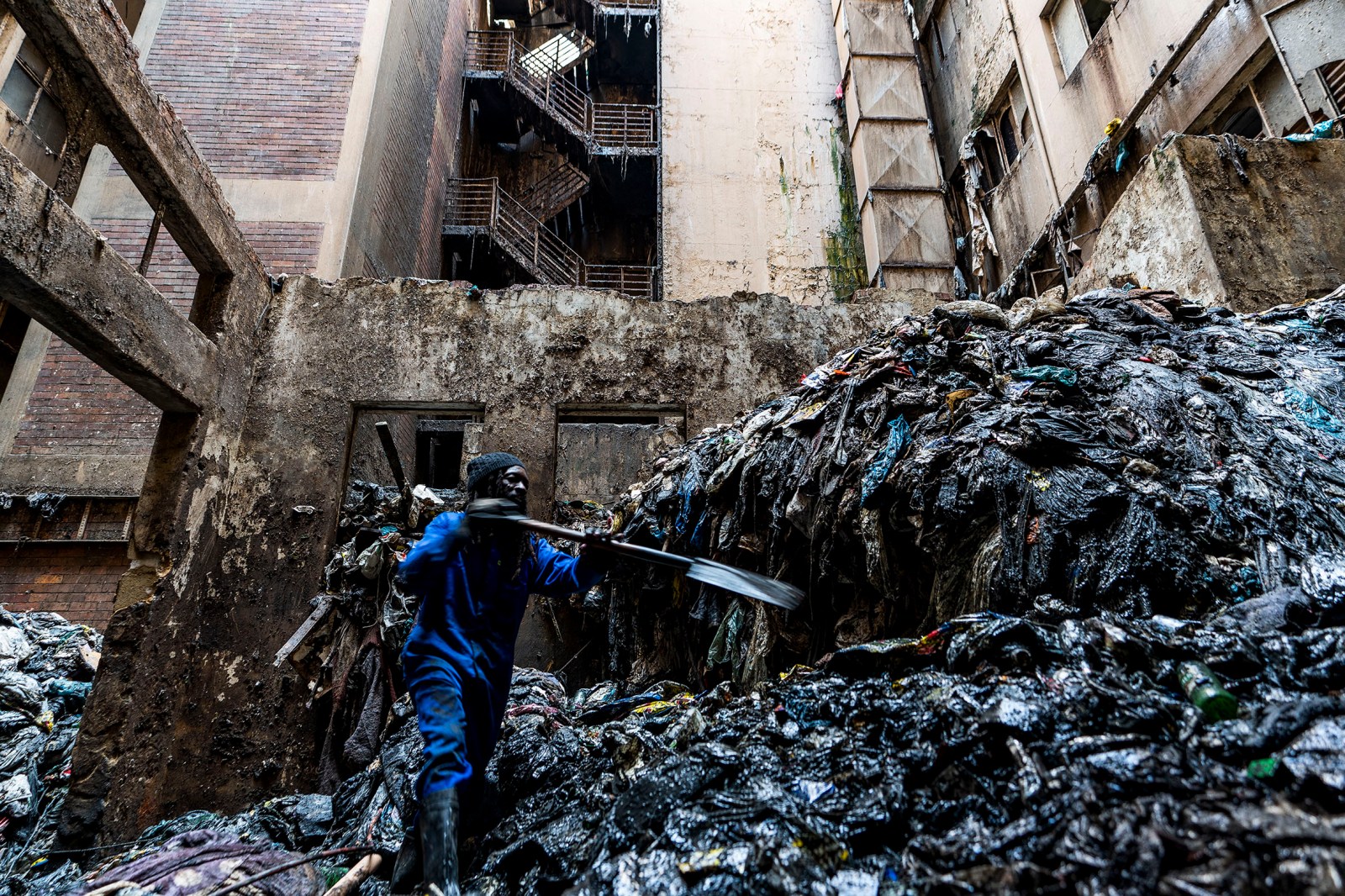 A man standing in rubbish uses a spade to clear the mess. (Photo: Shiraaz Mohamed)

‘The building, when I walked into it, was not a place where I would want any human being to be staying in.’

Residents of Florence House, previously the Florence Nightingale Hospital, in Hillbrow, Johannesburg, lived in squalor for many years. Dirt, danger and a lack of basic services became a way of life for about 600 people occupying the seven-storey building, which also houses an orphanage caring for between 150 and 200 children.

The building was recently rescued, and its residents are being given back their dignity.

Skye Burgess, co-founder of NPO The People SA, which initiated the transformation, told Daily Maverick, “This building was owned by a trust. It was bought in the year 2000. It was actually used for displaced persons, as well as more of a social project. They [the trustees] did the upkeep, fixed the windows, did all the cleaning, provided security.

“Everything was fine up until 2016. When the main member of the trust died, another member immigrated and the third could not be found. If a trust can’t be renewed within three years of a member dying, it dissolves. So at the moment, the building has not been reclaimed, it is owned by a non-existent trust.”

The absence of caretakers resulted in the building becoming decrepit, without a drainage system or a supply of water. It was overcrowded and was filled with the stench from garbage. Raw sewage, sanitary pads and nappies were a common sight. People would relieve themselves in buckets and dispose of the contents in the dysfunctional drains.

Move One Million’s Charles Barrell, who assisted with the removal of the rubbish, said: “The building, when I walked into it, was not a place where I would want any human being to be staying in. It was absolutely disgusting.”

Move One Million and The People SA, together with the residents, began cleaning the building, fixing windows and floors and removing the garbage as the building’s rehabilitation process began. Pikitup provided five 10-ton trucks daily to remove the waste, and to date around 500 tonnes of waste have been cleared.

Joshua de Villiers of The People SA said, “Essentially we want to basically rescue this building, this is a historical landmark. I was shocked at the condition. Shocked as to what… was going on in this place. So then we just started getting involved. But then we realised, you can throw as many mealies and as much clothes as you can into the situation, but it’s not going to make their living conditions better. We realised we had to go more structural if we wanted to change things, because they are never going to kick these people out.”

Resident Micheal Kunene welcomed the changes and said, “We [him and his wife] have been living here for 10 years. The condition was very bad. The smell was terrible, there were lots of mosquitoes, not to mention the rats. There were too many rats. They are not scared of us, they run straight toward you as if to jump on you.

Another resident, known only as Rasta, (who was also part of the clean-up team), lives on the ground floor and had to place his bed on crates to avoid getting wet from water that flooded his floor because there was no drainage system.

“There was too much water in my room. People from upstairs would throw the water down here and there was no place for the water to run out. I put my bed on crates so that I could sleep properly. When they started cleaning I begged them to help us with the water. The water is gone now and things are better.”

Plans are under way to have the plumbing, electricity and water supply restored. Residents are being educated about basic hygiene and the disposing of refuse. Old oil drums have been placed on each floor of the building for rubbish, and inhabitants have been appointed to collect the garbage and take it to a central point.

Long-term plans for the building include a recycling station, rooftop garden, renovating the orphanage, job creation for residents, repainting the building and setting up a building council for long-term sustainability and community upliftment.

“It’s about giving people back their dignity and their pride,” said Barrell.