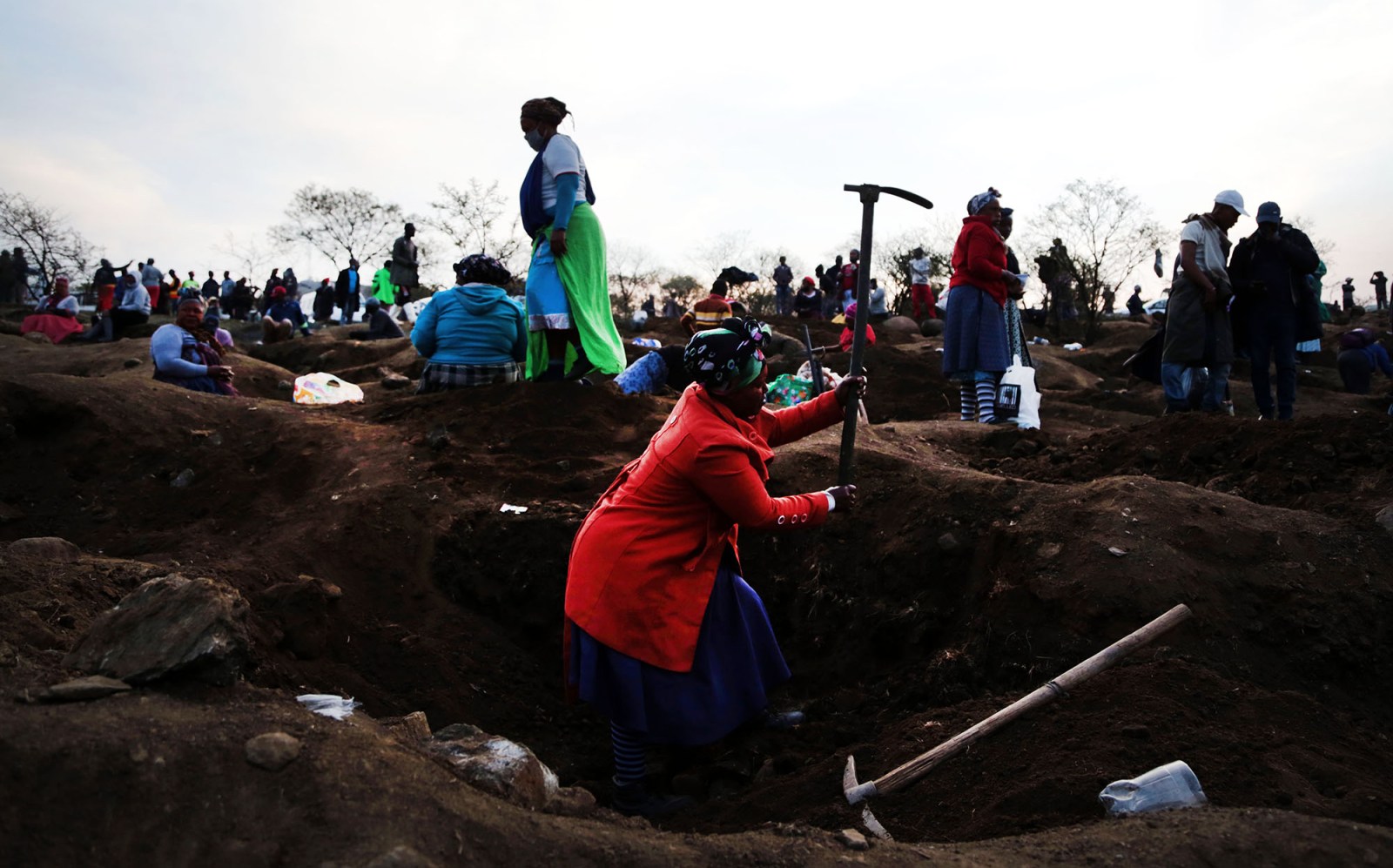 Residents search for what they believe to be diamonds after the discovery of unidentified stones at KwaHlathi village near Ladysmith in KZN. (Photo: Felix Dlangamandla)

KwaHlathi residents in KwaZulu-Natal hope that unidentified stones could change their future.

Uninformed observers watching the scene from afar – in the dark of night – would be forgiven for thinking the scrubland of KwaHlathi, in the Ladysmith area of KwaZulu-Natal (KZN), had been subjected to an invasion of giant fireflies.

Here, for a week now, informal prospectors have been digging with pickaxes and spades from early morning until well into the dark, headlamps firmly strapped on, torches resting on the ground, many believing – others hoping – that the pretty stones they are extracting from the hard earth are diamonds.

“I was here [last] Friday afternoon, I was busy with my brothers, working here, opening this space. Saturday, by 10am [this pit] was very, very open. Those brothers of mine were removing some stones, rough stones from the black soil – you can see there is black soil here,” Sam Chayambuka told DM168 this week, his feet inside the pit, his khaki pants stained with soil.

“Saturday, by four o’clock, we started getting some small pieces of [stones] but not green, the white one, some of them, they had cracks. If you put it up to the sun you can see some cracks. I took them to Maritzburg and left them in Maritzburg. Now I am back, I want to open a bigger hole, up to six metres down, and maybe by Thursday or Friday, I will get some small [diamonds].”

Chayambuka is one of more than 1,000 informal prospectors – men and women, young and old – who are hopeful that the unidentified stones will alter his future. According to reports, a herdsman made the first “discovery” on 12 June.

But the reality is that the “diamond rush” is likely to end with the same disappointment that the 2018 “gold rush” on the south coast of the province did. Geologists have said that given the age of the terrain and the look of the stones, they are highly likely to be quartz crystals. In the unlikely event that some of the stones are diamonds, they will have to be mined and sold according to South Africa’s strict Diamonds Act.

None of this has dissuaded the prospectors, who continue their digging amid a strong police presence, adamant that just one real diamond will “change things”.

Some of the more industrious prospectors have been using a cellphone app to identify the stones. The app results that DM168 saw all reflected quartz, although one woman said three of the stones she “scanned” were identified as diamonds.

Ladysmith resident Mdu Maphumulo – his facemask pulled below his chin and a khaki hat shielding his head from the hot winter sun – held up a clear stone for DM168 to inspect. “We are here digging for diamonds. It looks real,” he said, rolling it between his thumb and forefinger.

“We are still going to go and check [its authenticity] but for now we are keeping it for ourselves because we believe it is our economy as blacks. God has finally come and changed our lives forever now,” he smiles, then shrugs, then beams.

Maphumulo said his one “worry” was that the prospectors would not adhere to coronavirus regulations. The provincial government has stated publicly that it shares that fear – which is not unfounded – given the erratic use of masks at the site.

The contagious hope of the mostly KwaHlathi residents looking for life-altering gemstones is understandable, given the years they have had to live under a dysfunctional authority in a poor, violent and underdeveloped area, and in a country with a soaring unemployment rate. KwaHlathi falls under the ANC-run Alfred Duma Local Municipality, borne out of the 2016 merger of the Indaka Local Municipality with its richer cousin, the Emnambithi/Ladysmith Local Municipality.

Ladysmith’s budget was six times bigger, two-thirds of it generated through local rates and services.

Indaka was considered one of the country’s poorest municipalities and was deeply problematic, having been placed under administration in 2009/10, again in 2013/14 and once more in 2015/16.

Such interventions usually take place when the municipality has collapsed, is corrupted beyond hope, and service delivery has ground to a halt. The lawless nature of Indaka was on display in July 2015 when the municipal manager, Sinatra Khumalo, was killed in an ambush.

And the proverbial apple has not fallen far from the municipal tree.

In February 2019, Alfred Duma municipality’s executive director for the technical and infrastructure services department, Oscar Hlatshwayo, was also shot and killed in an ambush.

In March 2020, violent protests broke out in Ladysmith, the seat of the municipality. The protesters were reportedly demanding the removal of Mayor Vincent Madlala over allegations of looting and his involvement in taxi violence.

Alfred Duma is plagued by water shortages and water interruptions, as are the other two local municipalities falling under uThukela District Municipality, which is currently under administration, together with Alfred Duma’s neighbour, Inkosi Langalibalele Local Municipality.

Since the 2018/19 financial years, Alfred Duma has also been the subject of three major investigations by KZN’s Cooperative Governance and Traditional Affairs (Cogta) department. One investigation is probing financial irregularities and maladministration, another the misappropriation of assets, while the third centres on 62 cases of employee misconduct.

In October 2020, the KZN Cogta told the national Standing Committee on Public Accounts that only one of the investigations had been completed. In March 2021, Cogta’s parliamentary committee grilled the provincial department on why the probes had not been completed. The delay was blamed on bureaucracy.

On 15 June, MEC for Economic Development, Tourism and Environmental Affairs Ravi Pillay led a fact-finding mission to KwaHlathi, accompanied by Madlala, mineral resources officials, a traditional leader, and others. The meeting had to be handled “sensitively” according to an official, as the desperation for work and stable income in the area is well known.

During the visit, a site inspection was conducted by the South African Diamond and Precious Metals Regulator, the Council for Geoscience and Mintek. Pillay said samples taken from the site would be analysed and the Department of Mineral Resources and Energy would announce the results within a month. DM168