Battle of the Metros (Part Two): An early forecast for... 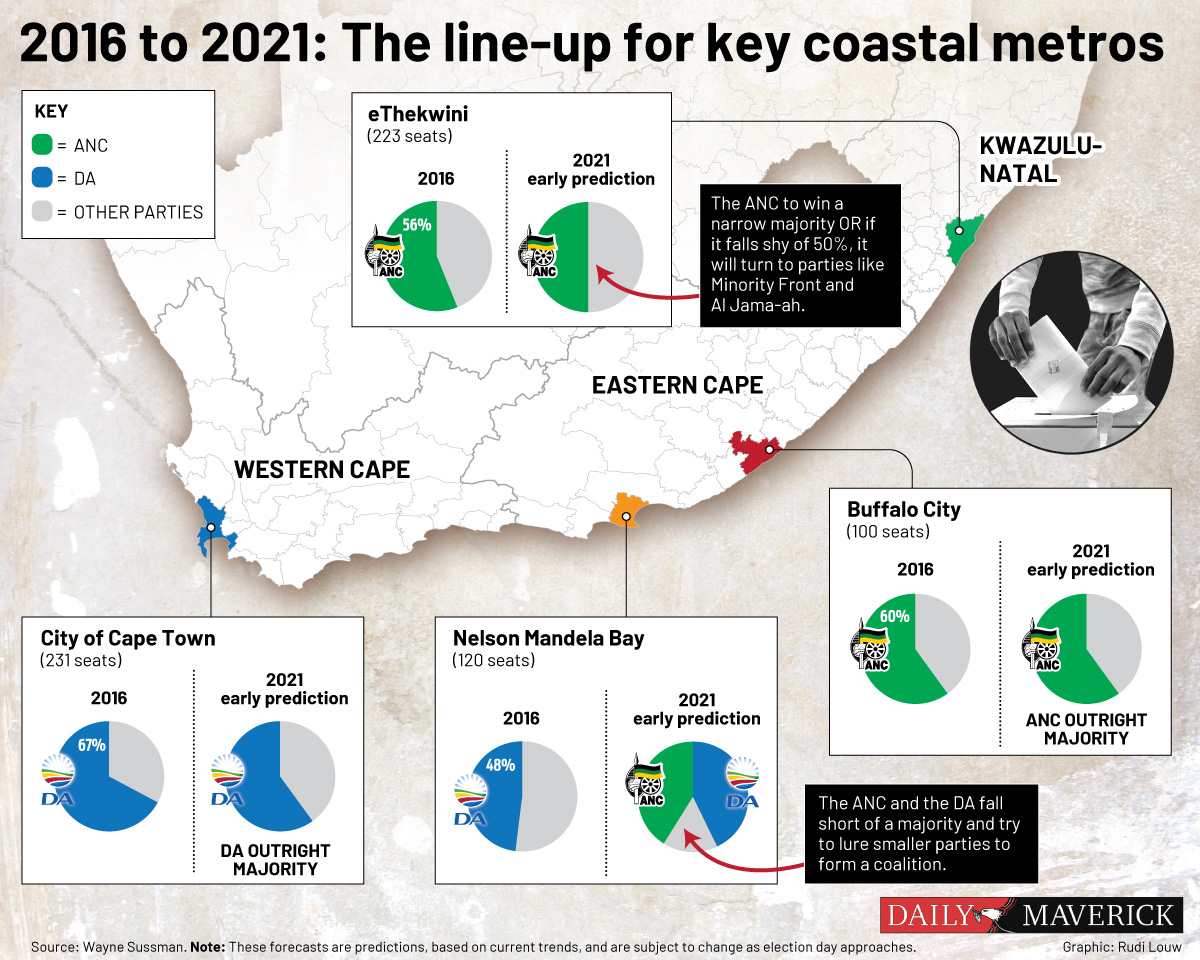 Expect a few changes in four coastal metros, but only one ‘safest’.

There are 130 days until South Africans go to the polls to elect those who will represent residents at a local government level. We have a long way to go – lists need to be finalised. We still have to go through the period of councillors you have never heard of getting their 15 minutes of fame by resigning in disgust and defecting to another party. We have to get past the third wave of Covid-19, service delivery challenges and community protests.

Of the four coastal metros, only Buffalo City has had the same mayor since the 2016 election. Nelson Mandela Bay has had four mayors from three different parties; eThekwini saw Zandile Gumede, the mayor it elected in 2016, appear in the dock; and the mayor re-elected in Cape Town in 2016, Patricia De Lille, quit her party to form GOOD.

In the space of 10 years, the City of Cape Town went from being the most competitive metro in the country to the least. Helen Zille, the then mayoral candidate of the DA, had to form an unlikely coalition in 2006 when the party emerged as the largest in the metro with 43% of the vote. A decade later it won 67% of the vote, amassing over one million votes more than its closest challenger, the ANC. Cape Town was the only metro in the country in 2016 where the largest party won more than 60% of the vote. The DA has many more challengers this time around.

Former mayor De Lille will want her GOOD party to have a strong third-place finish and see an orange blanket cover much of the Cape Flats. The Cape Coloured Congress came second in a recent Delft by-election and it will believe its unapologetic positions will resonate among the majority of the electorate. Gayton McKenzie and the Patriotic Alliance (PA) have also set the city as their next target. Established parties like the African Christian Democratic Party (ACDP), Freedom Front Plus (VF+) and Al Jama-ah will also fancy their chances of hurting the DA among certain voters. There are many parties hoping to lure softer DA voters. The lanes to Mitchells Plain and Athlone are more crowded this time round. The one challenge for these many pretenders to the Cape Town throne is that they could cannibalise each other and not reach their full vote potential.

The ANC has had a tough time in the Mother City. In 2006, it received 39% of the vote. It fell to 24% in 2016. Its one advantage is that competition for the hearts and minds of voters in the Cape Town townships is not as fierce as the competition in Mitchells Plain, because it mainly has to contend with the EFF and the DA.

Early prediction: The DA to win an outright majority and retain control of Cape Town. It will, however, lose seats and Cape Town is no longer likely to be the least competitive metro in the country.

It is hard to fathom a scenario in which the ANC gets less than 50% of the vote in the largest city in the home province of former president Jacob Zuma. In 2014 on the provincial ballot, it got 65% of the vote in eThekwini.

In 2016, the ANC’s vote share fell to 56%. But if one separates out the support for the ANC on the proportional representation (PR) ballot and the ward ballot, there is a big gulf. The ANC won 52% of the ward vote, as independent candidates mainly coming from the ANC received 8% of the ward vote to finish third in the elections. The ANC received 59% of the vote on the PR ballot. Although voters were not happy with some of the ANC ward candidates, they still had faith in the party to lead the metro. The ANC will believe that if it chooses popular ward candidates, the gap between PR support and ward support will diminish significantly.

The DA is expected to finish as the second-largest party. It will hope that it can rely on the strong Indian support it got in 2016. The EFF grew from 3% in 2016 to 12% in 2019. If this continues, the ANC could well find itself looking for coalition partners.

Early prediction: The ANC to win a narrow majority in eThekwini. If it falls shy of 50%, it will turn to parties like the Minority Front, Al Jama-ah and African Transformation Movement to continue ruling the metro for another five years.

The 2021 local government election is expected to be the most boring in Buffalo City. This was the second-safest metro in 2016 after Cape Town, with the ANC bagging 60 out of the 100 seats. A number of the ANC’s councillors in Buffalo City have been in the news for the wrong reasons but it is not expected to wound the party as it marches to a big win. The DA and EFF are the biggest challengers to the ANC in the metro, but are well off the pace.

Early prediction: The ANC to win an outright majority, and politically Buffalo City to become the safest metro in the country.

The DA fell four seats short of winning an outright majority in the metro in 2016. It cobbled together a coalition with smaller parties and was not dependent on the EFF. The election is expected to be close again with the 2019 provincial election results and by-election trends suggesting that neither the ANC nor the DA will be able to win an outright majority. There is also a scenario that the EFF will finish third again, but not be the kingmakers – there are potential paths to coalition majorities without it. A new party worth watching in Nelson Mandela Bay is business leader Mkhuseli Jack’s Abantu Integrity Movement. The PA and VF+ are both expected to do much better this time, which is a cause for concern for the DA.

Early prediction: The ANC to emerge as the largest party but fall short of a majority.

A lot can change between now and election day. Treat these early predictions with caution. There is a long way to go. DM168