Week 5: Teachers will be vaccinated from next week —... 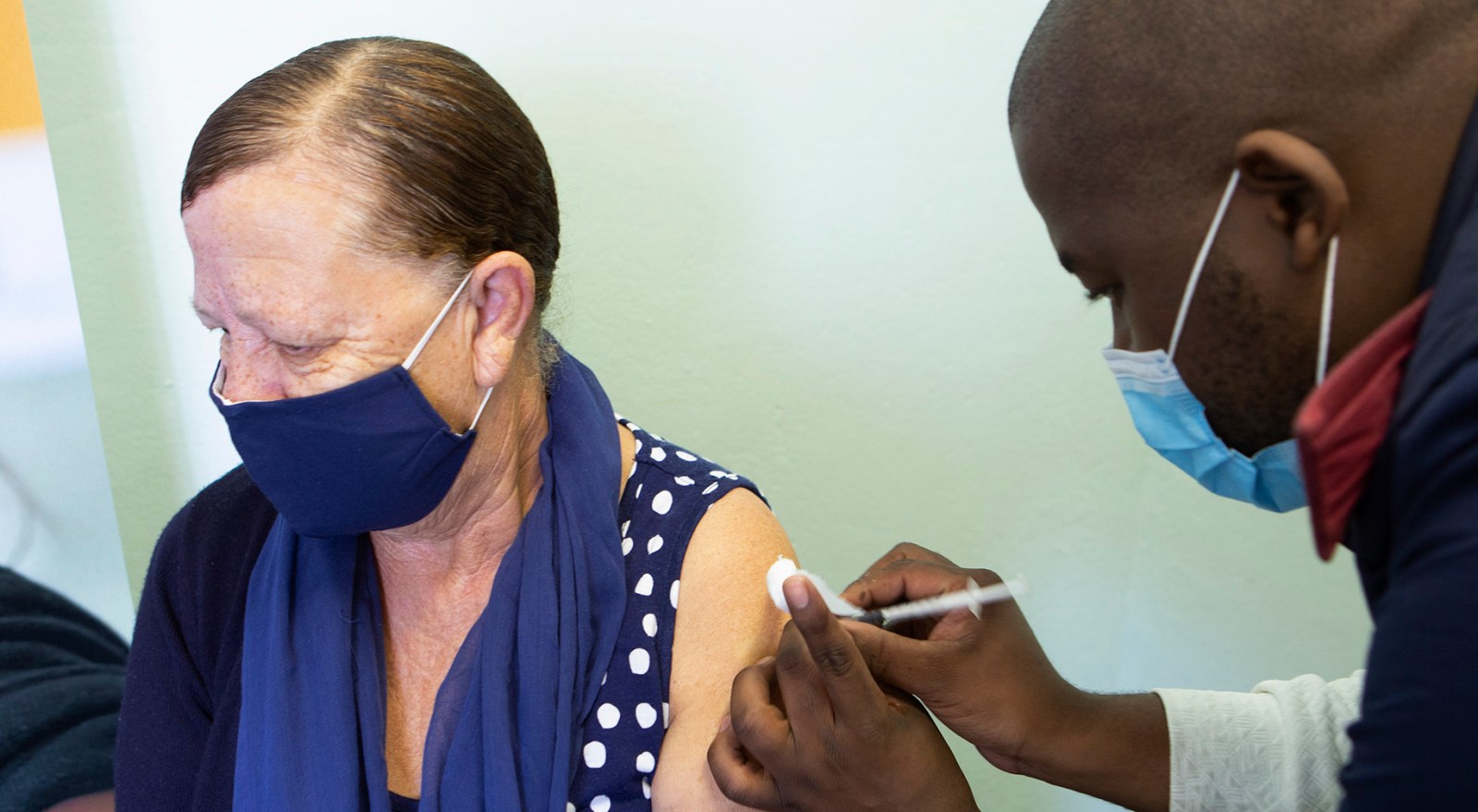 A woman gets her vaccine at Brooklyn Chest Hospital in Cape Town on 15 June 2021. (Photo by Gallo Images / Misha Jordaan)

South Africa’s half a million teachers will be vaccinated from next week, regardless of their age — and the country can expect millions of Pfizer doses from the Covax facility by the end of June. Meanwhile, the Democratic Alliance has called on Parliament to investigate the management of the roll-out.

On Thursday, 17 June, the latest vaccination statistics available were for midnight, Tuesday 15 June. Registration stood at 3,576,657 with 1,486,044 people having received their first Pfizer jab.

The provincial breakdown is as follows:

While two million Johnson & Johnson vaccines at Aspen’s plant in Gqeberha will have to be destroyed, they will be replaced by the end of June, said President Cyril Ramaphosa during his national address on Tuesday evening.

By that time, the country would also have received another 700,000 Pfizer doses, he said.

Some Johnson & Johnson doses will be used to vaccinate teachers and thereafter “security personnel on the frontline”, he said.

The vaccination rate can be at least doubled by next week once the Johnson & Johnson vaccine doses are available, according to Dr Nicholas Crisp, deputy-director general of the department of health.

The 300,000 J&J vaccines will arrive in the country on Friday, 18 June, according to the national health department’s technical adviser, Dr Aquina Thulare, who was briefing Parliament’s portfolio committee on health.

They will be distributed to the provinces next Tuesday and must be administered by 11 July.

Staff at all schools will be vaccinated, irrespective of age, she said. This will happen in the course of 10 working days. The health department is working with the basic education department to link schools to their nearest vaccination site, she said.

There are 499,000 educators in the country. The initial 300,000 doses will be supplemented with 199,000 doses from the batch of 1.2 million Johnson & Johnson doses to accommodate the entire sector, she explained.

Thereafter, it is likely that security personnel will be vaccinated. This will include correctional services, the police and the army.

Thulare emphasised the department’s goal of vaccinating all 5.5 million people over the age of 60 by 16 July. More than 70% of this age group must be vaccinated before the programme can incorporate other age cohorts, she said.

The country is expecting 1.4 million Pfizer doses through the Covax facility on 28 June and there are 576 active vaccination sites – 130 are run by the private sector and the remaining 446 are public sector sites.

Meanwhile, the Democratic Alliance has called for a special parliamentary investigation into the government’s management of the vaccination roll-out. The investigation would bring the players involved in the roll-out around one table.

Deputy President David Mabuza responded by saying that the country was doing all it could to roll out the vaccines as quickly as possible. He is the chairperson of the inter-ministerial committee on vaccines (read this report by Marianne Merten).

The Western Cape has said a “shortage of vaccines” has kept it from scaling up vaccinations as planned. It hoped to vaccinate 120,000 people this week. Nevertheless, it expects to receive 140,000 doses of the Pfizer vaccine on 24 June and some Johnson & Johnson doses by the end of the month.

The province has so far received 245,700 Pfizer doses and administered 213,356 of these. Close to two thirds of healthcare workers have been vaccinated.

The province now has 33 private sites and 172 public sites. The Momentum mass vaccination site opened in Bellville on 4 June and the provincial health department has committed to cover some uninsured residents at this private site.

The province does allow for home vaccinations for bedridden residents. This can be arranged through the provincial contact centre on 0860 142142.

A mass vaccination site at the Cape Town International Convention Centre will open in the first week of July. It will be run by the private sector and the City of Cape Town.

Another mass vaccination site on the Cape Flats is being planned.

Of South Africa’s 506,220 mineworkers, only 1,899 have been vaccinated. Six civil society organisations have voiced their concern that there is no concrete plan to vaccinate mineworkers and mining-affected communities despite them being at particular risk of contracting Covid-19. The Minerals Council has said that it plans to support the government’s strategy (read the report).

The province’s health department says it is aware of these challenges. It has launched door-to-door visits, is allowing manual registration and has opened “contact centres” in each district. Luvuyo Mehlwana visited vaccination sites to see how they are doing. DM/MC