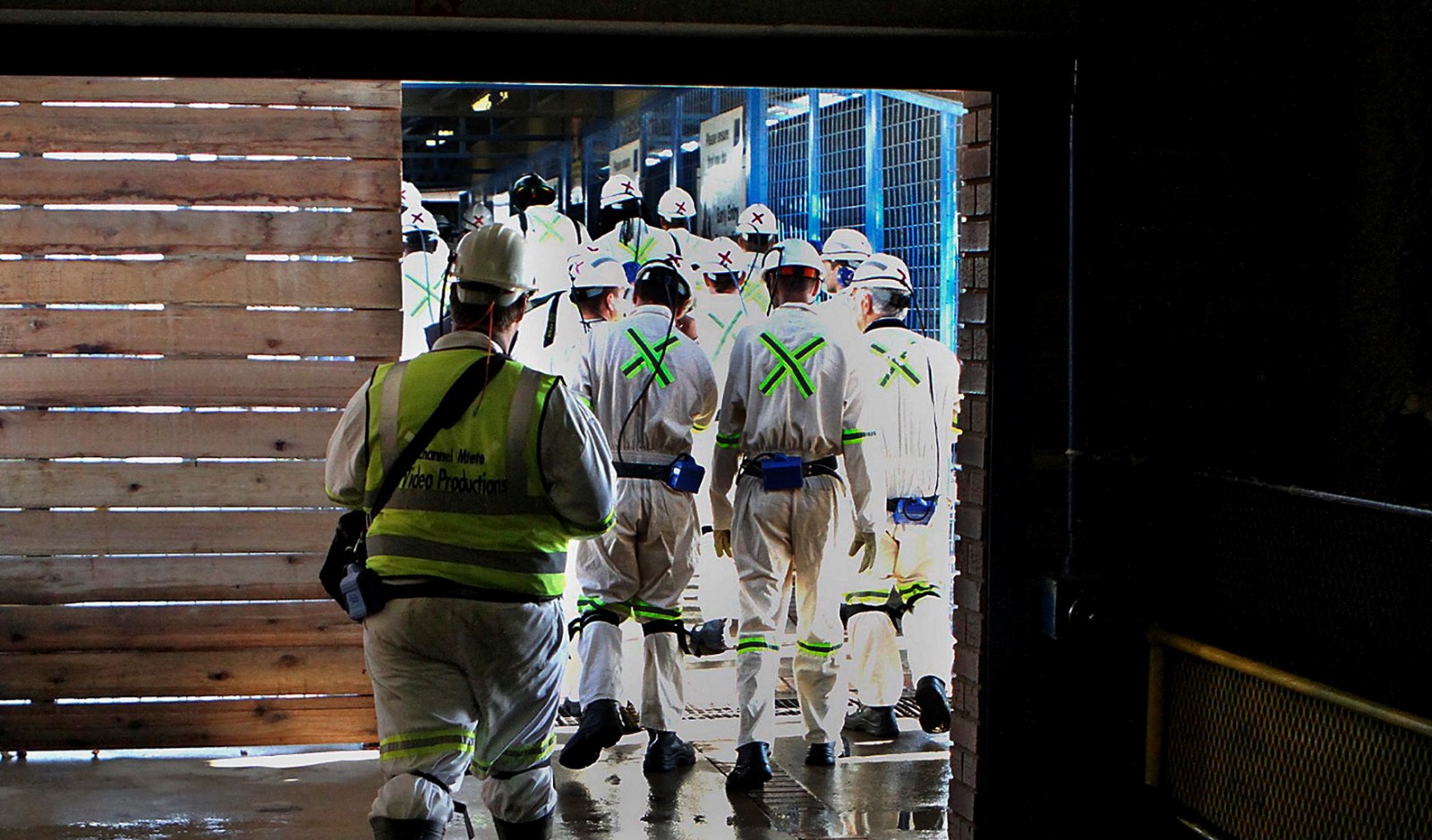 RUSTENBURG, SOUTH AFRICA - MARCH 6: Members of the media at the Lonmin Wester Platinum mine on March 6, 2013, in Rustenburg, South Africa. Lonmin invited all international and local media for a visit at its operations at Marikana. The purpose was to showcase Lonmin's sustainability initiatives within the Greater Lonmin Community, including working conditions above and below ground. (Photo by Gallo Images / The Times / Moeletsi Mabe)

Civil society organisations sounded the alarm when mining was declared an essential service in South Africa during the country’s lockdown. They feared the congregate nature of the work would put miners and mining-affected communities at particular risk of Covid-19. Now that the vaccination rollout has begun, these organisations have demanded a detailed plan on how government and business will make good on the vaccination promises.

Six civil society organisations have voiced their concern that there is no concrete and specific plan to vaccinate mineworkers and mining-affected communities.

However, the Minerals Council – which represents most mining companies in South Africa – says its plan is to support the government’s strategy.

According to the council, there are 385 mines in South Africa with 506,220 employees. Of these, 1,899 employees and contractors and 880 “community members” have received their first Pfizer dose. As of 15 June, 36,476 mining sector employees had tested positive for Covid-19 and 422 had died.

Government and the Minerals Council have in the past acknowledged that the mining sector is an essential service. Both have committed to vaccinating mineworkers and mining-affected communities, yet there is no official plan to vaccinate them, according to ActionAid South Africa, Bench-Marks Foundation, the Centre for Applied Legal Studies, Lawyers for Human Rights, the Legal Resources Centre and the Right2Protest Project.

In the letter, they pointed out that government and the council had committed to vaccinating these communities using the healthcare infrastructure of the mines and at the cost of the mining industry.

They await a formal response to this letter, according to Robert Krause, an environmental justice researcher at the Centre for Applied Legal Studies, and Lauren Nell, an attorney at the Legal Resources Centre.

In January 2021, the Minerals Council offered financial and logistical support for the government’s rollout.

The mining sector could carry out 60,000 vaccinations per day at a cost of R300-million, said Dr Thuthula Balfour, head of health at the Minerals Council. Balfour added that mining companies have the ability to vaccinate 2.25 million people in mining-affected communities.

Council CEO Roger Baxter told Business Maverick the mining sector “could help vaccinate as many as three million people”. At the February 2021 Mining Indaba, President Cyril Ramaphosa said he was “immensely encouraged” by these offers.

“Given these offers and promises, we ask at the time of the attempts to massify the rollout, where is the action? Where are the bottlenecks? Who is responsible for the delays in rolling out the programme for saving lives?” the organisations asked.

Mineworkers and mining-affected communities are more at risk of contracting Covid-19 than the general population, says Krause. The nature of minework makes physical distancing near impossible and ventilation is poor, creating the conditions for Covid-19 to spread easily and quickly.

This is evident in the fact that higher infection numbers have been observed in municipalities which are mining centres in comparison to comparable municipalities in the same province, explains Krause.

For example, 49% of North West’s caseload was in the Bojanala platinum district, despite only 17% of the province’s population living there.

In addition, mining-affected communities often lack access to water, which makes Covid-19 protocols such as frequent hand-washing impossible for many, he says. In some mining areas, workers live in a community with their spouses, parents and other relatives.

Furthermore, air pollution associated with mining has already left communities vulnerable to respiratory illness, he says. This is the case in Mpumalanga, where pollution from coal-fired power stations close to coal mines is causing serious health problems for children.

In addition, these communities often live in peri-urban and rural areas where healthcare facilities are scarce, said Nel.

“Mineworkers and mine-affected communities need to be consulted regarding this issue,” said Nel.

From civil society’s perspective, it is unreasonable to place individuals at risk for profit for the mines. The mines need to place pressure on the government to provide a plan as well as vaccines. The Minerals Council and the mines they represent wield power and thus this should be used to place pressure for a plan to be done and implemented as a matter of urgency.

“During discussions with the Minerals Council, the issues of procurement and placing pressure on government to hasten vaccinations have been confused. We are calling for pressure to be placed on government.”

The Minerals Council is not aware of the letter but will “continue to engage” with the organisations, according to its spokesperson Charmane Russell.

The council is “surprised” by the letter “as our channels of communication are always open”. Russell said the council had a meeting with the six organisations a week earlier to brief them on the status of the vaccination rollout and the constraints it faced.

Nel confirmed that the council addressed some of the group’s concerns. However, it awaits a formal response.

The council is committed to the national vaccination programme and has worked closely with Business for South Africa to support this programme, it said in a statement on 3 June 2021.

There are 55 mining sites which have applied to register as vaccination sites and another 76 as “secondary sites”. These sites will be able to vaccinate 443,000 employees. So far, five sites have received permits from the department of health. One is administering vaccines currently.

“The timing of permitting and the provision of vaccines is in the hands of the department of health in what we understand to be a very vaccine-constrained environment. It is expected that good progress will start to be made in the third quarter when more vaccines become available,” said Russell.

Workplace vaccination in the mining industry will follow the national strategy of vaccinating based on age. The industry will have its own “vaccination registration process” integrated with the government’s Electronic Vaccine Data System. Companies will be able to bulk upload employee information and schedule vaccination appointments at their mine-based sites.

“The Minerals Council has confirmed the industry’s intention to support the vaccination of employees and community members, and is engaging with the authorities on how this can best be done, either through vaccination centres or in-kind support.”

The presidency, ministry of mineral resources and energy and the ministry of health did not respond to Maverick Citizen’s request for comment on the letter or the plan to vaccinate mineworkers and mining-affected communities. DM/MC