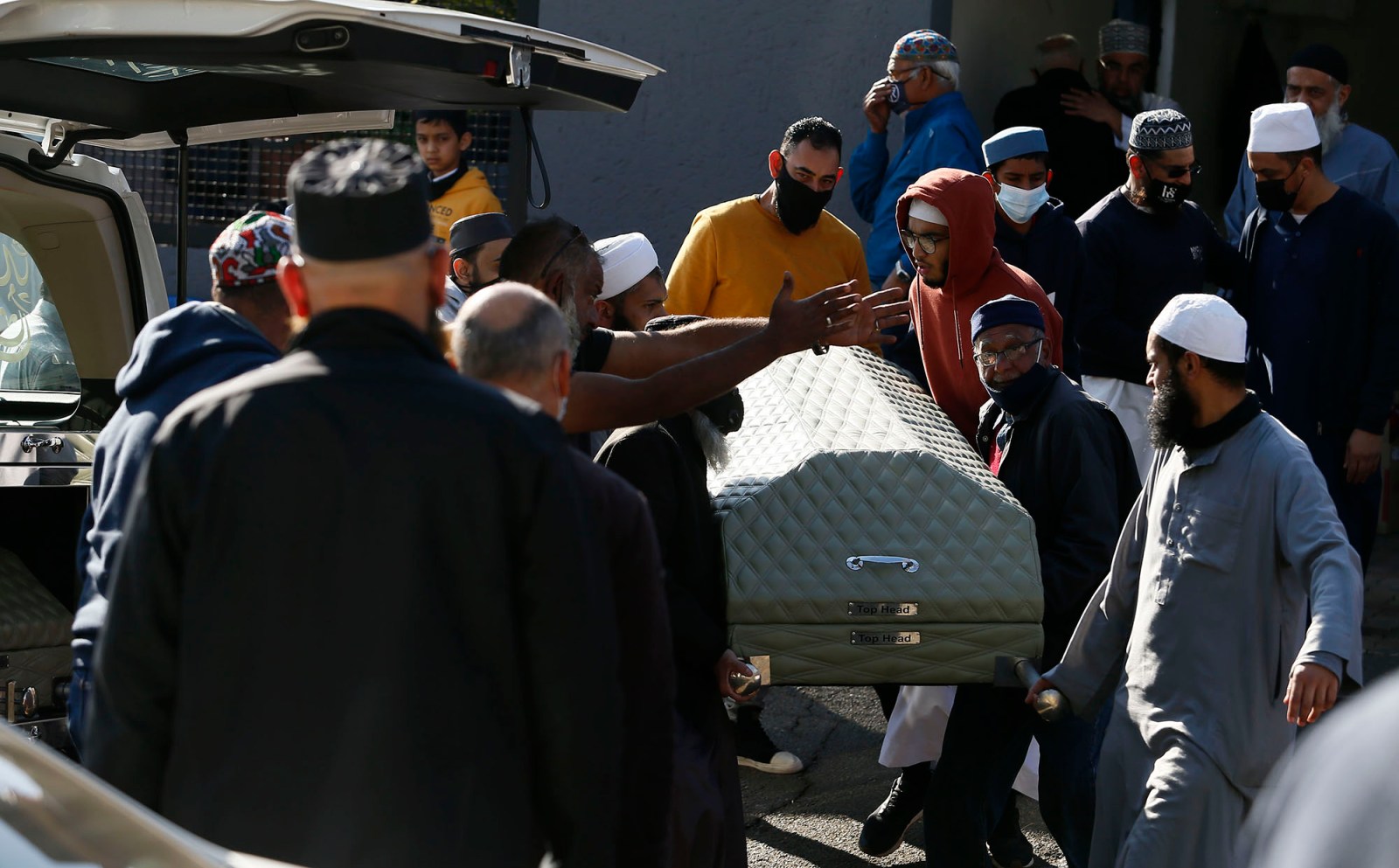 The funeral service of a couple believed to be electrocuted at their home in Crosby near Mayfair in Johannesburg. (Photo: Felix Dlangamandla)

Other Johannesburg residents have reported shower shocks as the city grid nears collapse. City Power has instituted an urgent investigation.

Just 10 days ago, Zaheer Sarang and Nabeela Khan got married and agreed to spend their lives together – instead, they were buried in a joint funeral on Monday after being electrocuted in their Crosby, Johannesburg, home at the weekend.

Zaheer’s parents, Yusuf and Anisa Sarang, live in the main house and had built a cottage for the young couple. The couple got home from their honeymoon on Saturday night, and Zaheer’s parents thought the couple was lying in on Sunday morning.

However, that afternoon Yusuf Sarang became worried as the curtains in the cottage remained closed, and there was no sign of life. He forced open the door to discover the bodies of his son and daughter-in-law.

The family believes that Nabeela Khan-Sarang was electrocuted in the shower, and that Zaheer tried to help her and was also electrocuted.

City Power CEO Mongezi Ntsokolo has launched an urgent investigation while the SA Police Service has opened an inquest.

Last week, the family got slight shocks when they used the taps and reported the problem to City Power several times. Other community members have made similar reports of electric currents running through their water.

Crosby – west of Johannesburg – Soweto and Alexandra are the areas worst affected by the city’s electricity and water crisis. Crosby was also recently without water for days – it is in the same municipal ward as the Helen Joseph and Rahima Moosa hospitals, where operations had to be cancelled and many services halted because of water cuts. Gift of the Givers has installed a borehole at Rahima Moosa and will start digging one at Helen Joseph.

The family’s spokesperson, Ricky Nair, a community activist, says City Power must investigate illegal connections across the area. He says a woman and child were electrocuted at the Slovo informal settlement in the ward last year after residents hung wet blankets over electrical wiring.

As news spread of the death of the couple, numerous other residents came forward to show their reports to City Power, which they place on community WhatsApp groups.

One of these read: “Two weeks back City Power technicians worked on the pole and there was a power surge in our house which blew appliances; since then we are getting shocked in [the] bathroom and [by the] kitchen taps. I thought this might be related to our [electricity] board, but we have had a private electrician come check, and he said the problem is definitely from the pole.”

Resident Ridwaan Coovadia told Daily Maverick, “I went into the shower and got a shock. It sent waves down my right side. The electricity goes on and off all the time, and I am tired of reporting and reporting.”

In Observatory, in the east of the city, Tom Waspe said, “I got into the shower [about 10 days ago], and I was wet and barefoot. I tried to adjust the taps, and I got a massive kick [shock]. It was scary.”

Now he showers with the electricity mains switched off.  This started happening about two weeks ago when the grid began to fail.

Across the city, residents are reporting power cuts that last for days and reinstatements where the current veers between low and high voltage.

In the last week there were electricity protests in Soweto and Alexandra, and residents would not let technicians leave City Power depots.

At the weekend there were 4,807 open calls about electricity cuts, with 62 City Power teams across the city to deal with these.

“All depots have told us there is no money at present for new equipment, and parts are limited – most teams only have copper wire and insulation tape to do repairs,” said Van Dyk.

“In one case, a team went to collect a new mini sub [station] for Wilgeheuwel, which had been without power for five days, but were told by the supplier that the city had not paid for it.”

City Power spokesperson Isaac Mangena said, “City Power has started to build and strengthen internal capacity. We have promoted over 30 trade artisans into electricians to increase capacity at depots effective from June 1st.”

Mayoral committee member Mpho Moerane said, “The increase in capacity of contractors, and the internal technicians will assist in reducing backlogs and ensure a quick turnaround to outage calls.” DM