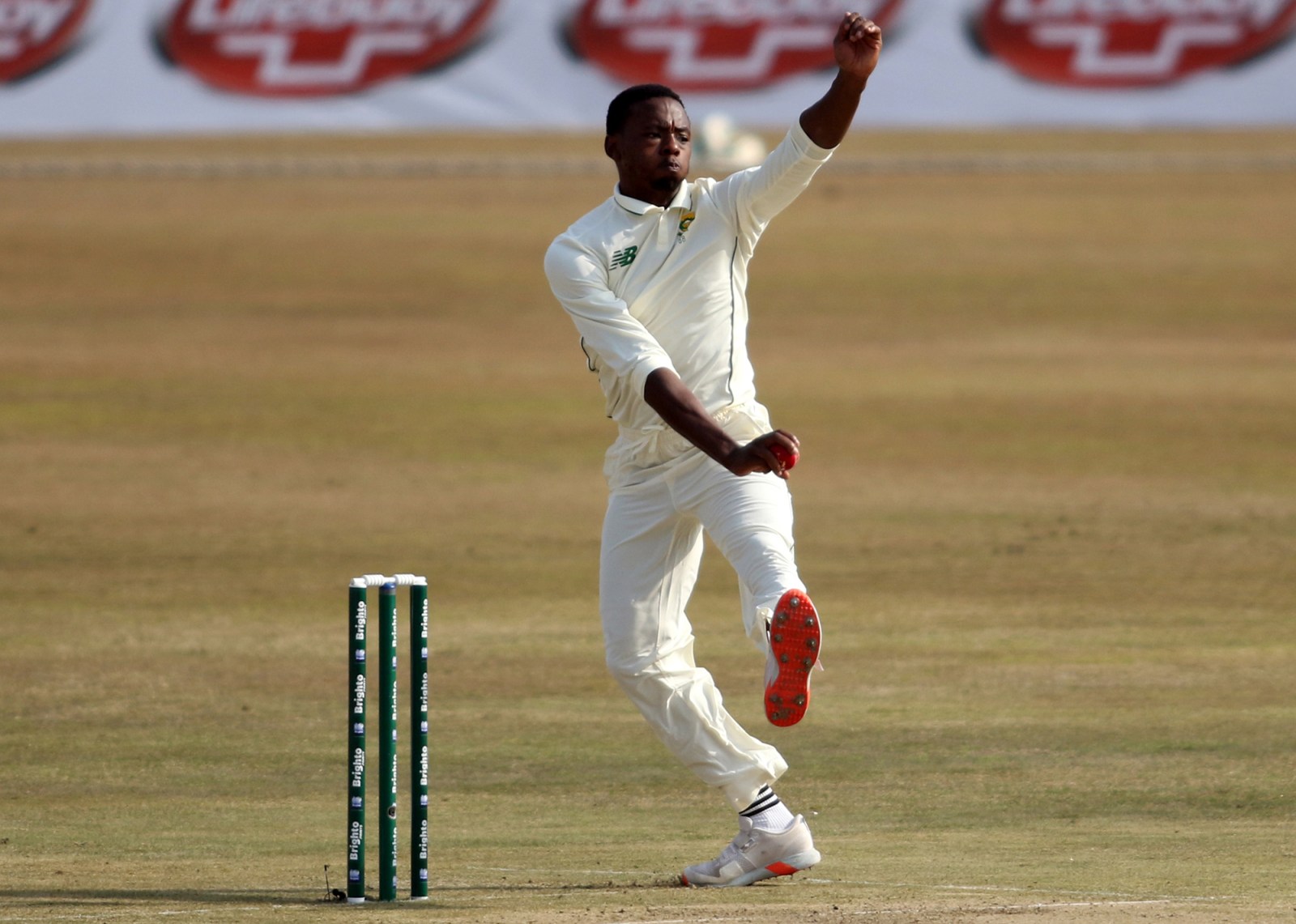 South African Kagiso Rabada ended with figures of five for 34 in 20 overs as the West Indies were dismissed for 162 in their second innings in St Lucia. (Photo: EPA-EFE / Sohail Shahzad)

Quality bowling from the seam trio and a resurgent batting performance from Quinton de Kock set the Proteas on their way to a confidence-boosting first Test win over the West Indies in St Lucia.

On a weekend when South African cricket took steps forward in the boardroom with the formalisation of a new, majority independent board, the Proteas brought some hope on the field with an innings and 63-run win over the West Indies in the first Test.

The Daren Sammy Cricket Ground in St Lucia was expected to offer up spin-friendly conditions, but it was the pace and seam of Kagiso Rabada, Anrich Nortje and Lungi Ngidi that set the Proteas up for victory.

The trio claimed 18 of the 20 required wickets between them over the course of the two-and-a-half-day duration of the match. The triumvirate provided the perfect foil for a batting unit that did a good job in difficult conditions to secure a first away Test win in nearly four years.

The last time the Proteas won away, against England at Trent Bridge in July 2017, only captain Dean Elgar, De Kock and spin bowler Keshav Maharaj played. It’s an indication of how much has changed and the size of the rebuilding task that is in front of the team.

Elgar, leading the team for a second time, but the first since being officially appointed as Test captain until 2023, wasn’t carried away by the result.

“It was a proper professional performance by everyone; clinical and ruthless, a bit more of the old school South African style of cricket that I have been pushing for,” Elgar said after the match.

“It was great to see the guys put their hands up with the ball, even though the pitch really assisted the seamers. We need to keep pushing the bar, we need to go further and beyond.

“Winning one game doesn’t create a lot of success, winning two games and a series is something I will be pushing for.”

In the first innings, Ngidi took five for 19 in 13.5 overs with Nortje weighing in with four for 35 in 11 overs. Rabada bowled without much luck, taking one wicket as the Windies were dismissed for 97 after winning the toss and choosing to bat.

In reply, the Proteas scored 322 on a difficult pitch to take command of the match with the batting unit backing up the bowlers. De Kock posted a career-best 141 not out with the increasingly consistent Aiden Markram scoring 60 and the reliable Rassie van der Dussen contributing 48.

After a difficult stint as Proteas captain that seemed to weigh heavily on him, De Kock looked liberated and played with his usual fluidity despite a pitch where batsmen never really seemed settled. De Kock scored only 74 runs in six innings as captain, but nearly doubled that in one innings without the responsibility of captaincy and a shift to No 6 in the order.

In the West Indies’ second innings, Rabada, bowling with the same hostility and versatility he showed in the first innings, had a little more luck. He claimed his first five-for in 33 innings going back to the second Test against Australia in Port Elizabeth in 2018. Rabada ended with figures of five for 34 in 20 overs as the Windies were dismissed for 162.

Despite the lengthy lean patch in terms of reaching the bowling equivalent of a century, Rabada didn’t feel that he had done much different to claim the five wickets.

“You measure the highest accolades in cricket by scoring hundreds and taking five-fors and 10-fors,” Rabada told the media after the Test.

“It’s something you always strive to do. Unfortunately, it hasn’t happened for me in recent years, but I’m glad that’s happened today. The only thing you can judge yourself on is being consistent in your preparation. It’s like scoring a hundred. Who wouldn’t be happy with scoring a hundred? I am really glad with the performance I put in.”

After putting aside his role as senior bowler, Rabada then reflected on being a senior statesman in the team, even though he is only 26.

“For me to be one of the most experienced at 26 gives you a picture of how young we are as a team. This performance will give us massive confidence moving forward, not only into the next Test match but also for the year ahead.

“This game can be unforgiving, but we were consistent in our preparations and we established what type of cricket we want to play and set a few standards we wanted to uphold.

“And we stuck to that. If we continue to do that, luck is going to be on our side more often than not. In our previous games, we were probably lacking — myself included — in important periods of the game and we would let it slip away from us.

“We were good in patches, but at times we could get sloppy. In this match we kept our foot on the throttle, and identified those moments where in the past we slacked off. We stuck to our guns.” DM