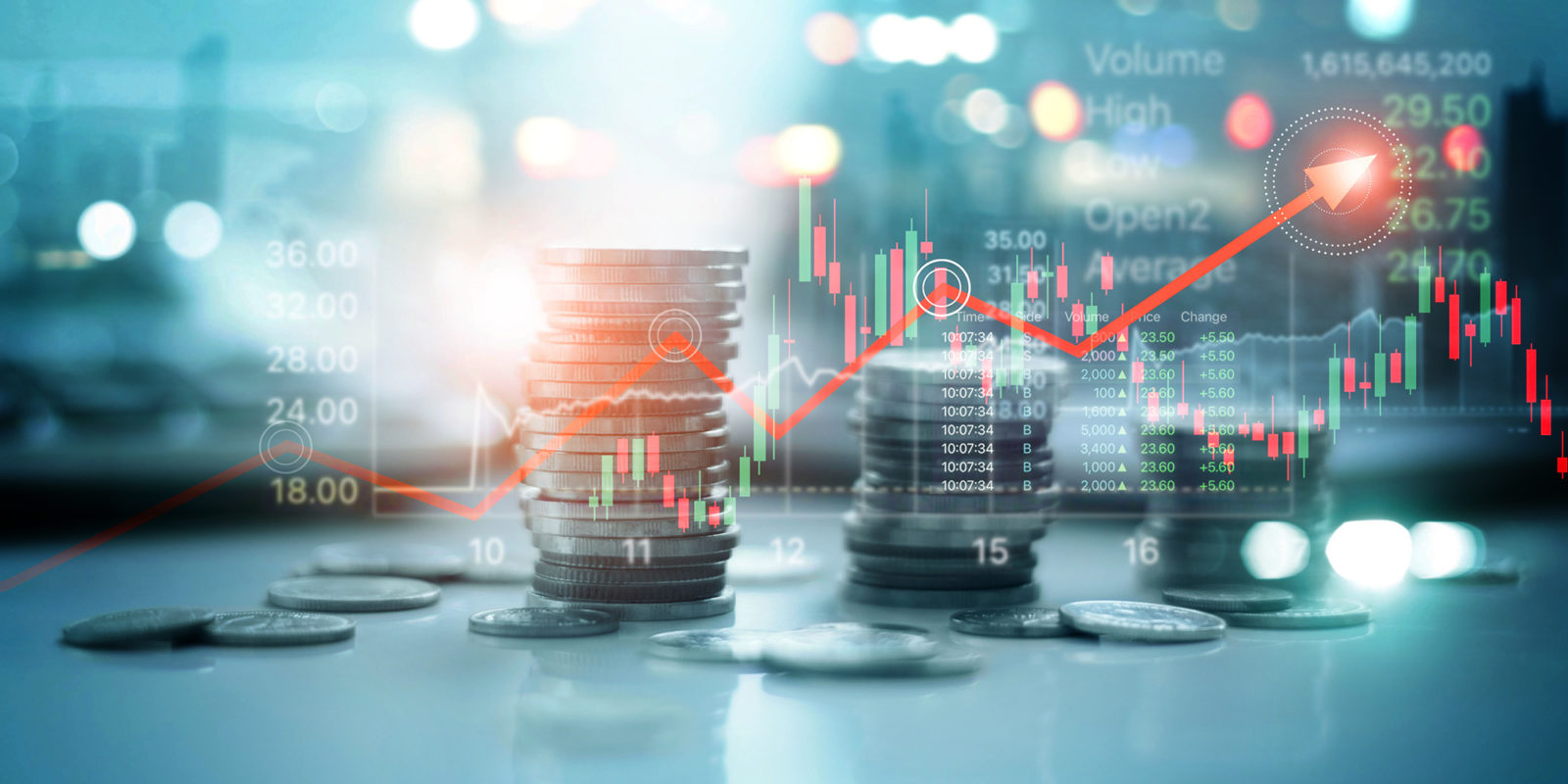 Equity market volatility has declined below its long-term average and value shares are maintaining their lead on growth shares. Fund managers remain positive on the equity outlook. But is this the calm before the storm?

It’s counterintuitive to think that as global growth prospects have looked better and better, value shares have benefited more than growth stocks. So much so that they have gained sufficient impetus to pull ahead of a universe that has been dominated by sharp rallies in Big Five tech stocks during the pandemic.

During May, the MSCI Growth Index slipped 0.13%, while the MSCI Value Index gained 3% during the month. Year to date, the outperformance is even more pronounced, with growth shares (up 6.5%) delivering less than half the performance of their value counterparts (16.7%).

These performance differentials back up investment views from earlier this year that value was likely to overtake growth after years of underperformance. At the heart of the shift in relative performance are the upbeat global growth prospects and the associated rise in inflation expectations.

There is some debate about how much macro factors contribute to the performance of stock markets. Recent research conducted by Goldman Sachs Asset Management found that although economic growth may influence equity performance, micro matters more, with most performance coming from stocks and not countries.

It notes that investors often question how their views on economic growth should inform how they choose to invest in developed and emerging markets.

“Economic theory suggests that growth influences equity markets in stages: 1) higher corporate profit growth, which leads to 2) higher EPS growth, which finally translates into 3) an increase in stock prices. While such a progression makes intuitive sense, in practice, we do not see a particularly strong statistical relationship.”

According to historical data, there is some positive influence on equity market performance. Still, it is not to a material extent, as the graph below shows, with the strength of the relationship 0.3 versus a perfect correlation of 1.

When it comes to stock selection, Goldman Sachs points out that data since 2010 show that “a significant proportion” of international fund managers have delivered returns in excess of their passive counterparts through their active stock selection. As shown in the graph below, Its analysis puts the outperformance of emerging market and foreign large-cap managers versus the median passive fund at 3.8 percentage points and 2.3 percentage points, respectively.

Again looking from a macro perspective, it would be difficult to attribute the outperformance of emerging market stock markets of late to their economic growth prospects because they lag the advanced economies in an increasingly bifurcated global economic recovery.

Nevertheless, the MSCI Emerging Market Index delivered 2.3% in May versus the MSCI World’s 1.2%. An increasing number of fund managers have expressed a preference for carefully selected emerging markets rather than the shares listed in advanced economies and trading at much higher valuations.

Still, there seems little sign of a turnaround in the rise in developed stock markets. Last week global equities reached a new high, and the S&P 500 remains within easy sight of its all-time high. US stock markets have come slightly off the boil in May and early June, with the S&P 500 0.5% ahead after the first week and the Nasdaq 1% after declining 1.2% in May.

Equity market volatility, as measured by the CBOE VIX, the so-called global fear index, has also subsided to around 16 compared with the 37-plus high reached in late January this year. According to Bloomberg, volatilities across other assets, including corporate bonds, government bonds and foreign exchange, have been declining too, as shown in the graph below. 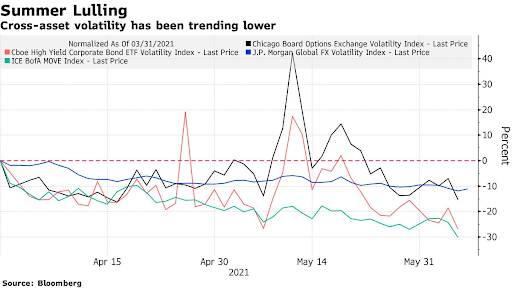 But before you get lulled into a false sense of complacency, remember that the inflation debate is nowhere near ending and, with eurozone inflation coming in at 2% this week and the US CPI set to be released within the next week, it may be the calm before the storm.

However, UBS chief investment officer Mark Haefele is confident that the backdrop for stocks remains positive, justified by the positive economic backdrop, a strong earnings outlook, and continued policy support.

He puts forward three arguments that support a continued rise in equities:

His bottom line: “Economic data last week continued to point to rising inflation amid higher energy prices. But the rise should prove narrow and short-lived. With growth accelerating, we think the economic outlook is benign for stocks and expect cyclical parts of the market to outperform.”

Capital Economics concurs, believing that investors shouldn’t worry about inflation posing a threat to US stocks. It says that inflation will only be a problem for stocks, “if it hurts the real growth outlook or leads to a sharp tightening of real monetary policy” – something the economic consultancy doesn’t expect to happen soon. As such, it expects the S&P 500 to continue rising over the next few years, but notes that tech and growth stocks “could lag broader market gains”.

It’s hard to bank on any definitive views on where the economy or financial markets are going when many unknowns lie ahead. Although arguments in favour of equities can be convincing, these optimistic Northern summer stock market sentiments may not prove lasting. When volatility re-emerges, as it will, it is likely to prove much wiser to be invested in a diversified portfolio across asset classes and regions. DM/BM