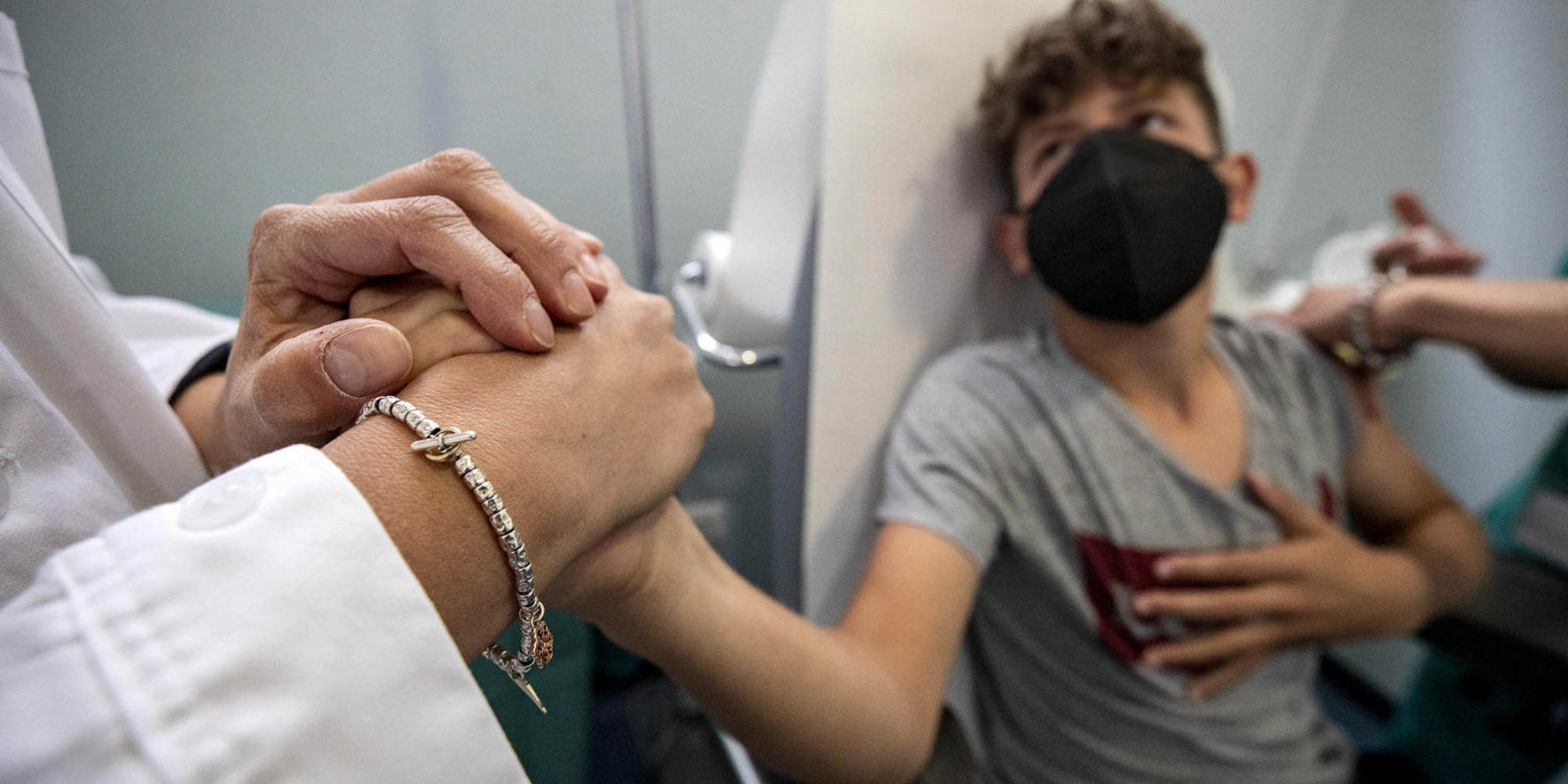 A boy receives a vaccine against Covid-19 in Rieti, Lazio Region, Italy, on 6 June 2021, the country’s first open day dedicated to children between 12 and 16. (Photo: EPA-EFE / Massimo Percossi) 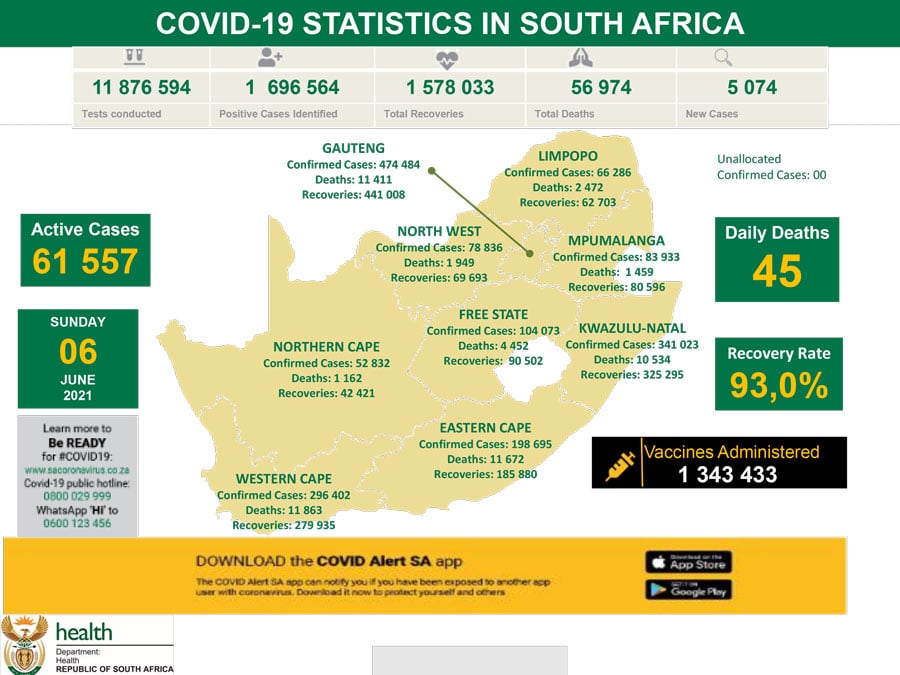 The US passed the milestone of administering more than 300 million Covid-19 vaccine doses. New cases and deaths continue to plunge and are back to the levels just after US states began imposing restrictions in March 2020. Hospitalisations are also falling.

The UK could start vaccinating children as soon as August, the Telegraph reported, with Health Secretary Matt Hancock warning that children make up a “huge proportion” of the latest cases. Separately, Hancock said it’s too early to say whether a planned easing of restrictions on 21 June can go ahead.

Officials from the Asia-Pacific Economic Cooperation said they would work to expedite the distribution and flow of coronavirus vaccines and other essential medical supplies.

US hospitalisations continue to fall, with 3.17% of beds occupied by Covid-19 patients on 4 June, according to the US Department of Health and Human Services. That percentage dropped from 3.67% on 28 May and is the lowest since 14 March 2020.

Washington state has the biggest share of hospital beds taken up by Covid-19 patients at 5.92%, followed by Maryland at 5.32%. Florida has the highest number of beds occupied at 2,177, followed by Texas with 2,035 patients. Those numbers declined in both states from the previous day.

Mississippi Governor Tate Reeves said his state’s low rate of vaccination is partly because a large number of people have already had Covid-19 and have built up immunity.

“We’ve got somewhere probably between a million or so Mississippians that have natural immunity and because of that, there is very, very, very little virus in our state,” Reeves said on CNN’s “State of the Union.” The Republican governor said he encouraged vaccinations, “but that’s an individual choice”.

In Mississippi, 27.5% of people have been fully vaccinated, far below the US total level of 41.6%, according to the Bloomberg Vaccine Tracker. The US Centers for Disease Control and Prevention recommends that people who have already had Covid-19 get vaccinated because it is uncertain how long natural immunity lasts. It is also unknown how long immunity from vaccines lasts.

About 1.15 million doses of vaccine were administered in the US on Saturday as the total rose to more than 300 million. Vaccinations have declined since peaking in mid-April and 51% of people in the US have received at least one dose, according to the Bloomberg Vaccine Tracker. President Joe Biden has set a goal for 70% of all adults to get at least one dose by 4 July. That number is now 63.4%, according to the CDC.

Another 376 deaths linked to Covid-19 were reported on Saturday, in line with recent numbers. Almost 580,000 people in the US have died since the pandemic began in early 2020. The nation added 14,089 new cases, according to data compiled by Johns Hopkins University and Bloomberg.

South Africa may have to pay R680-million to access five million doses of Sputnik V from Russia, just months after the health regulator turned down a donation of 15 million doses on fears about how people with HIV/Aids would react to the vaccine, City Press reported.

Iran reported 5,612 new coronavirus cases on Sunday, its lowest daily infection count since 27 December, the country’s Health Ministry said, adding that 122 people had died from the disease overnight, the lowest number since 3 April.

Russia registered 9,163 new Covid-19 infections in the past day, little changed from a day earlier, according to data from the government’s coronavirus monitoring centre. The illness resulted in 351 deaths, down from 399 the previous day, the data showed.

While the country is making progress, not enough Russians have been vaccinated yet, Health Minister Mikhail Murashko told state news agency RIA Novosti on Saturday. “The number of people with Covid immunity in Russia isn’t bad, but it’s still not enough for elimination. Our goal is elimination,” he was cited as saying.

Hancock: ‘Too early’ on UK easing

UK Health Secretary Matt Hancock said it’s too early to say whether a planned easing of coronavirus restrictions on 21 June can go ahead as ministers continue to weigh the threat of a potential fresh wave of the pandemic.

“We’ll be looking at all of the data over the next week,” Hancock said on Sky News on Sunday. “We are not saying no to the 21st of June at this point.”

Germany reported 2,249 cases on Sunday, down from 2,993 the day before. The total number of infections in the country since the start of the pandemic exceeds 3.7 million. The number of Covid-related deaths reached 89,228.

Bangladesh has authorised the emergency use of the Sinovac Covid-19 vaccine, the fifth approval by the drug regulator in the South Asian nation.

The UK is set to donate more than 100 million Covid jabs to developing countries, the Sunday Times reported, without saying where it got the information.

Prime Minister Boris Johnson will pledge a donation of more than £2-billion (about R38-billion) worth of shots at a summit of leaders of the Group of Seven nations starting on Friday — and promise more next year, it said.

Senegal could produce shots next year

Under an agreement, the Institut Pasteur de Dakar would use vaccine production technology developed by the Belgian firm to supply shots across West Africa, Reuters reported. Univercells announced the signing of a letter of intent for collaboration in Senegal’s capital in April.

The institute would begin packaging and distributing vaccines produced by Univercells in Belgium early next year, Reuters said.

Asia-Pacific ministers responsible for trade in the region said they would work to expedite the distribution and flow of inoculations and other essential medical supplies between economies.

Officials from the Asia-Pacific Economic Cooperation, which includes the US, China and Japan, said they would “consider removing unnecessary barriers to trade in services, particularly those services that expedite and facilitate the flow of essential goods,” according to a weekend statement.

Vietnam is battling its worst outbreak. Centres including Hanoi and Ho Chi Minh City have put physical-distancing restrictions in place to curtail the spread while others have imposed controls on returnees from affected areas, Chinh said in a statement.

IHH Healthcare to apply to give Sinovac jabs — report

The medical services provider will offer the vaccine to Singapore citizens and residents, especially those who are unsuitable to receive Pfizer-BioNTech and Moderna shots, the report said. It didn’t provide more details, such as how much it would cost to get the jab and how to register.

The Ministry of Health said last week it would allow Sinovac to be administered by private healthcare providers as part of a programme that permits the use of unregistered Covid jabs. Sinovac, approved by the World Health Organization, is not part of the national programme.

Malaysia’s health ministry said it will invite 3,000 people to participate in clinical trials for a new Covid-19 vaccine made by Shenzhen Kangtai Biological Products Co.

The Southeast Asian nation is among other countries — including Colombia, Argentina, Pakistan, the Philippines and Ukraine — taking part in the clinical studies, it said in a statement. It added that the studies involve the SARS-CoV-2 Vaccine (Vero Cell), Inactivated, which was approved by China for emergency use on May 14.

UK could start shots for children in August

Coronavirus vaccines could be rolled out to children in the UK from as early as August, The Telegraph newspaper reported, citing people familiar with the plan.

Under current modelling, the UK would be ready to start vaccinating 12-to 15-year-olds by the second half of August, or early September at the latest, a government source told the paper. Ministers are awaiting advice from the Joint Committee on Vaccination and Immunisation before making a final decision, it said. DM