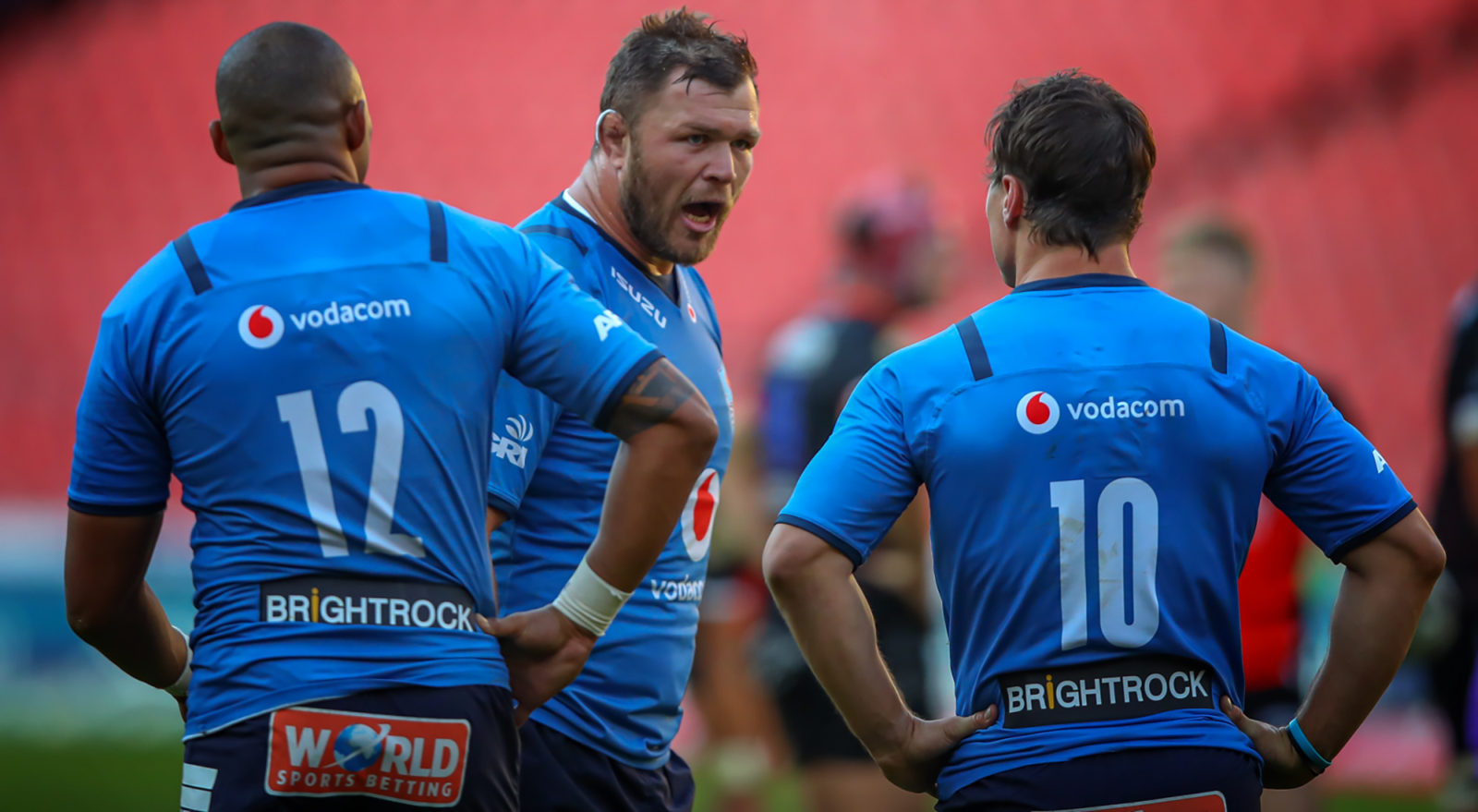 Duane Vermeulen’s influence will be missed if an ankle injury rules him out of the British & Irish Lions series. (Photo: Gordon Arons / Gallo Images)

The 46-man Springbok squad named for the British & Irish Lions series contained few surprises but could be short one of its most valuable players before hostilities even begin.

There are only a smattering of players Springbok coach Jacques Nienaber and director of rugby Rassie Erasmus really fear losing for the upcoming series against the British & Irish Lions. And one of them is injured.

Duane Vermeulen, Rugby World Cup final man-of-the-match and the unquestioned rock of the Bok pack, suffered an ankle injury playing in a Rainbow Cup match for the Bulls last Friday night. The full extent of his injury remains unclear although a Bulls source confirmed to Daily Maverick that he is only likely to be out of action for a “couple of weeks”.

Hopefully, that early assessment is accurate because Vermeulen will be a vital component of Nienaber’s team this winter. The bruising No 8 has been by some distance the best and most consistent loose forward in the country since competitions restarted post lockdown last September. Which is no surprise as he has been nothing short of brilliant throughout his career.

Vermeulen is already back in Cape Town for further medical assessment, which he will undergo on 7 June. Erasmus admitted to being concerned.

“Duane is a big worry for us,” Erasmus said. “I personally didn’t talk to him. Jacques (Nienaber) spoke to him and the medical staff and I spoke to (Bulls coach) Jake White about it.

“It looked bad and Duane won’t easily limp off with an ankle so early (in a match). We are fearing for the worst. We always expected that it’s going to be strength versus strength in the Rainbow Cup and that it would be six weeks of battle. We know South African derbies are brutal.

“So far we’ve actually been lucky. If you look at Super Rugby Aotearoa, they’ve lost a massive amount of players and we thought we were going to go the same route. We expected some losses … and I think Duane is going to be one of them.”

Better at every level

Vermeulen is that rare player that is more effective and quite simply, better, the higher the level of competition. And it won’t come much higher or accomplished than against a British & Irish Lions team. If his injury only keeps him out for a few weeks, as indicated, it would be a bonus for the Boks as he won’t be exposed to further injury.

The first Test against the Lions is seven weeks away and Vermeulen, given his status and excellence throughout his Test career, would not need to play again between now and then to be selected. All he would have to do is prove his fitness, which would be enough, such is his value.

In just about every position in the 46-man Bok squad named at the weekend for Tests against Georgia and the Lions, there is a like-for-like replacement. The difference between most players is marginal, but Vermeulen has no peers.

Uncapped No 8 Jasper Wiese is potentially a future great, but he’s a long way from Vermeulen’s stature or quality at this moment. The excellent Marcell Coetzee, who made his Bulls debut in the same game against the Stormers where Vermeulen suffered his injury, was not picked for the Bok squad.

The reasoning is that Coetzee has been out of the game for several months through injury and will only come into the equation as an injury replacement once he has some provincial games under his belt.

Coetzee can count himself unlucky because at his best, he is unquestionably one of the premier loose forwards in the world. He will almost certainly feature at some point this winter, given the attrition rate, although no one wants it at Vermeulen’s expense.

“Before the match against the Stormers, Marcell last played on 6 March. That was when he got injured, so this was literally his first game back,” said Nienaber.

“That’s the home ground advantage we have with a guy like Marcell playing in South Africa. He can play next weekend, he can play in the Rainbow Cup final if they make that, he can maybe play a game against the British & Irish Lions on 3 July.

“We might pick up injuries, and hopefully we don’t, but obviously guys like him can still make the squad.”

As expected, the 29 fit and available survivors of the triumphant 2019 Rugby World Cup campaign have been included in the squad. Only the retired trio of Tendai Mtawarira, Francois Louw and Schalk Brits, and the injured Warrick Gelant, were not included.

But there is still some uncertainty over locks Lood de Jager and RG Snyman. Both were included but neither is currently playing, meaning there might still be some tweaks to the squad in the weeks to come. With so much provincial and club rugby still to be played before the Lions series, the coaches will be watching matches through their fingers.

Unknown Montpellier lock Nicolaas Janse van Rensburg, a product of Affies in Pretoria, has been included. The 2014 Junior Springbok moved to France in 2016 and has forged a strong career there. His inclusion raised some eyebrows.

“He is here for a specific reason, because our lineout caller is Franco Mostert and he (Mostert) is one of the only guys who is 100% fit,” Erasmus said. “Eben (Etzebeth) is not a No 5 lock. We have Marvin Orie there, but one injury, and we’re in trouble.”

Specman, one of the world’s greatest sevens players, is the closest the Springboks have to Cheslin Kolbe, underlining how the Bok coaches have sought like-for-like back-ups in every position.

Penxe’s selection is also a reward for consistently high calibre performances at the Sharks after his career was nearly ended when the Southern Kings franchise folded.

There was always going to be a large number of overseas-based players in the squad and Nienaber and Erasmus didn’t disappoint in plucking some of the best from European and Japanese clubs.

Although it appears as a slap in the face for the Bulls, who have four players in the squad, the reality is that the Springboks are a cosmopolitan group of players with 22 of the group listed as overseas club players.

“The nice thing about the Sale set-up is that there are a lot of South African guys who have been in the mix,” Erasmus explained. “These are guys who we think are in sync, guys who we have access to and who play regularly with Faf and rely on his gameplan.

“Jean-Luc, Dan and Coenie, for example, are three ‘new’ guys, but most of them have jumped together in the lineout or scrummed together, and then in general play they have mixed with Faf.”

“It makes sense for us in that regard, especially because we feel the high-performance programme at Sale is really good. It’s terrible to lose the players because we just don’t have the money and we desperately want to keep them. But when you lose them to a set-up like that where there are a lot of other South Africans and they’re coached well, then it’s easier.”