Covid vaccines: This Mitchells Plain hospital shows how it should be done 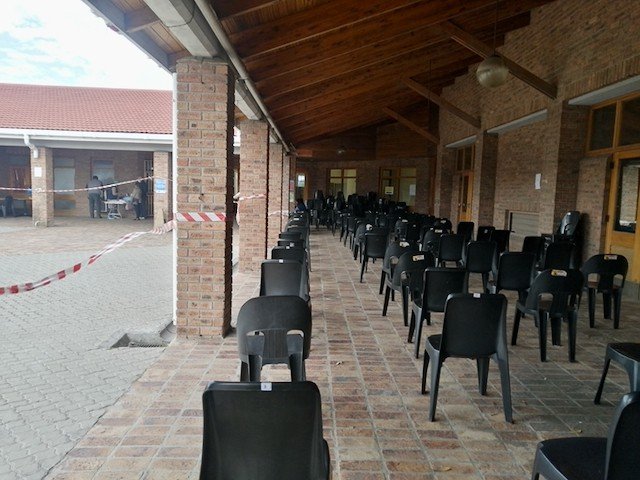 Lentegeur Psychiatric Hospital has chairs spaced apart — outside but under cover — for people waiting their turn to get vaccinated. This photo was taken at the end of the day after the vaccination process was finished. (Photo: Barbara October)

The Cape Flats vaccination site has been handling walk-ins efficiently and politely, but you must be over 60.

On Wednesday, my friend and I took a chance and went to Lentegeur Psychiatric Hospital in Mitchells Plain to try and get vaccinated. We had registered in April, but we were not convinced that anything would happen. I had heard along the grapevine of people taking the initiative, regardless of receiving an SMS, to find a vaccination site and decided to do the same thing.

We arrived at the entrance of Lentegeur and asked about vaccination. The guard told us to put on our hazard lights so that we would be directed to the right parking area. We went as directed and saw a fairly long line. I said to my friend, “Waste of time, let’s go somewhere else.” But we soon noticed the queue was moving steadily, so we joined it. Judging from the cars and the people around us, many, like my friend and me, were from leafier suburbs.

After about 20 minutes we were directed to chairs and simply moved along until we got to the waiting area near the entrance. The key announcements were: “No vaccinations for people under 60 — even if you are 59!”

We were asked who had not registered on the system, and a couple of people raised their hands. They were told not to worry they would be registered once inside.

Staff with clipboards asked to see IDs and this was captured manually.

There was also a medical person asking everyone if they had any Covid-19 symptoms.

As we got closer to the main entrance, each person was given a red sticker with a number. Elderly people who were not particularly agile or had a walking frame or wheelchair were taken to the front and from there taken into the main hall.

The banter among the personnel and good vibes filled the air as we shuffled along.

Once in the hall, the vaccination areas were numbered, each section had a divider. There must have been at least 20, possibly more. Each section had an administrator on a computer capturing ID info and a professional health care worker who did the vaccination. Everyone was cheerful and there was plenty of conversation around — how far people had travelled as well as how so many were struggling to get appointments.

Once I had the jab, I was given a card with the batch number and the date for my second appointment in July.

You are requested to wait for 15 minutes and there was even a super-sized clock in the front for everyone to see.

We left Lentegeur an hour and half later, really pleased that we had taken a chance.

It was reminiscent of voting for the first time in 1994. People were helpful and happy to share their experiences. This is the way the vaccination drive should happen. Get people to such well-managed sites as fast as possible. I have no idea why the Department of Health thinks it necessary to make things so complicated.

The only thing that bothered me was that many of those in the queue, like me, would have been happy to pay for the vaccine, yet we got it free like everyone else. I am sure that if Lentegeur had a donation box, it would have done very well! We all want people to get vaccinated as it makes all our families safer.

People are happy to queue, especially when treated as kindly as we were. People are not gatvol of queues. They are gatvol of inefficiency and of the way the booking system is obviously letting down people who are not internet savvy or don’t have the necessary technology. DM