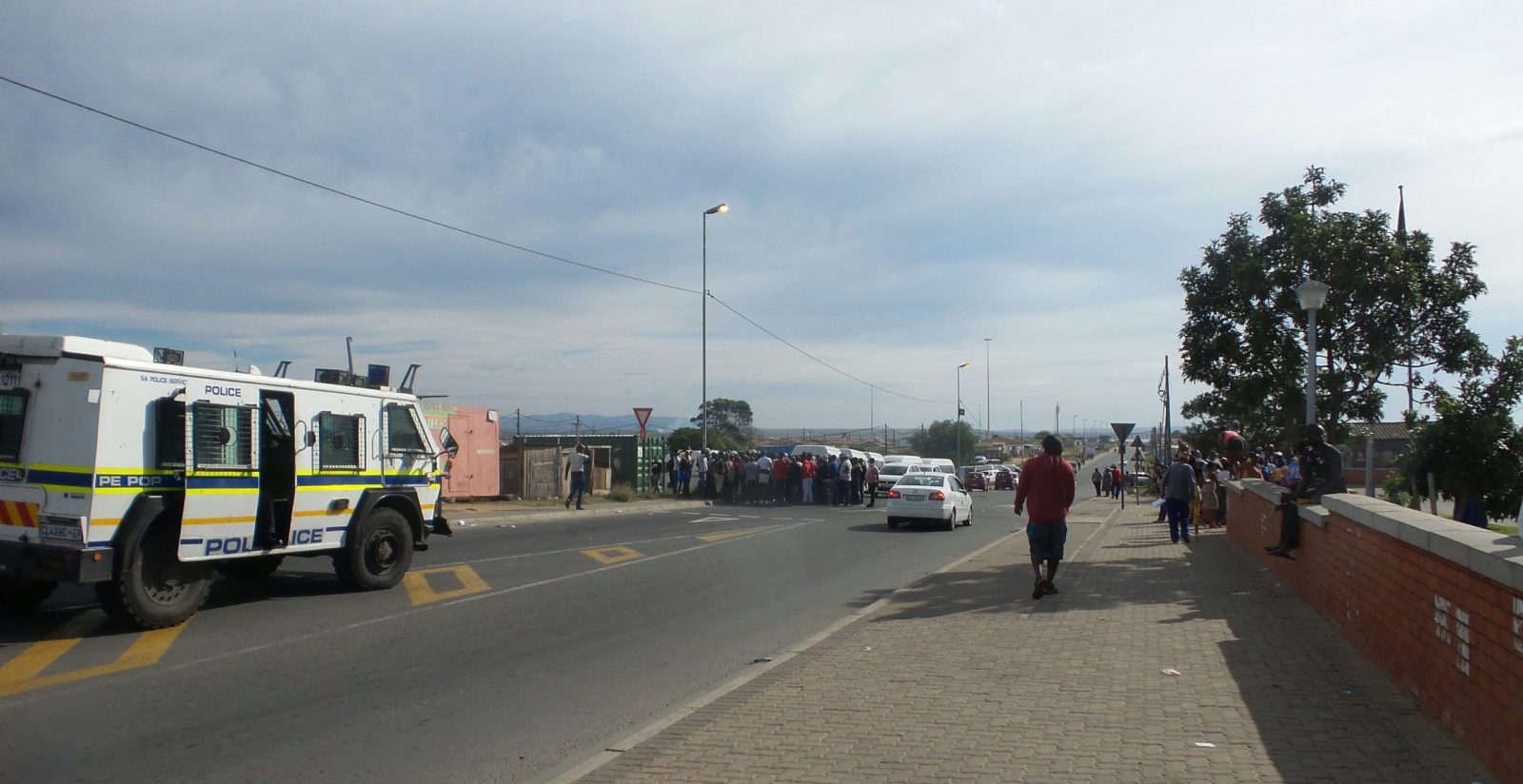 Dozens of taxi drivers gathered outside the Motherwell Magistrates Court on Thursday where six of their colleagues are facing charges of malicious damage to property and public violence for participating in ongoing protests over TERS funds. (Photo: Joseph Chirume)

Protesters in Nelson Mandela Bay have forced the closure of clinics, schools, shopping centres and disrupted many other vital services.

Nelson Mandela Bay Municipality Mayor Nqaba Bhanga is pleading for the army to be deployed to help quell the violent protests across the metro by taxi drivers. The drivers are demanding answers about their Unemployment Insurance Fund (UIF) Temporary Employer/Employee Relief Scheme (TERS) money.

Protesters have forced the closure of clinics, schools, shopping centres and disrupted many other vital services.

The most recent unrest started earlier this week in Gqeberha. Since then protesting taxi drivers have been blocking dozens of roads daily across the metro to stop other transport from operating. Several vehicles were torched and eight buses owned by Algoa Bus Company were set alight on Wednesday night in Motherwell.

Provincial Police Commissioner Lieutenant-General Liziwe Ntshinga said the estimated value of the buses is R12-million. “A case of malicious damage of property is under investigation. At this stage there are no arrests.

“Damaging the infrastructure, destroying property, blockading roads and hindering basic services are criminal acts and will not be tolerated,” said Ntshinga.

National Prosecuting Authority’s regional spokesperson, Anelisa Ngcakani said six protesters, aged between 22 and 53, appeared in the Motherwell Magistrates Court on Thursday for damage to infrastructure and public violence. Their case was postponed to 3 June where they are expected to apply for bail.

On Thursday all Kariega-based taxis suspended services and prevented any other taxis from operating in the city. During one incident on the corner of Ponana and Matanzima roads, about five taxis parked in one lane, only allowing motorists from both directions to battle for space to pass on the remaining lane.

A taxi driver, who identified himself as Simphiwe, was heard telling other protesters, “We must not punish our commuters. We don’t want anyone to be arrested … No pelting of other vehicles, no intimidation of anyone, and no beating other people who are not part of this,” he said.

Meanwhile, taxi operators also met and talks were mediated by Bhanga on Thursday to try and reach an agreement to end the impasse. But by night-time when no resolution was found, the mayor said he wrote to President Ramaphosa and Eastern Cape Premier Oscar Mabuyane, asking them to intervene.

“Unfortunately, no resolution was agreed to by the parties,” said Bhanga.

Health MEC Nomakhosazana Meth said, “After a group of protesters forcefully removed patients and staff at the Motherwell [clinic] on Wednesday night, health services in Nelson Mandela Bay have been negatively affected with more facilities forced to close on Thursday.”

Meth said it was disappointing the people in “desperate need of urgent medical attention like those who are due to give birth will be affected the most”.

“These protesters are playing with people’s lives. This is a matter of life and death but it seems they don’t care,” she said.

Witness Gakrishe of the Uncedo Taxi Association, distanced its members from incidents of violent actions and intimidation.

“Violence is being committed by criminal elements from the community who are taking advantage of the situation. We will continue with the strike if our demands for the money are not met. We also want our [arrested] members to be freed.”

Mayco Member for Roads and Transport, Rano Kayser said they will continue talks with the taxi operators on Friday. DM