Security and intelligence: What would it take to stabilise Cabo Delgado? 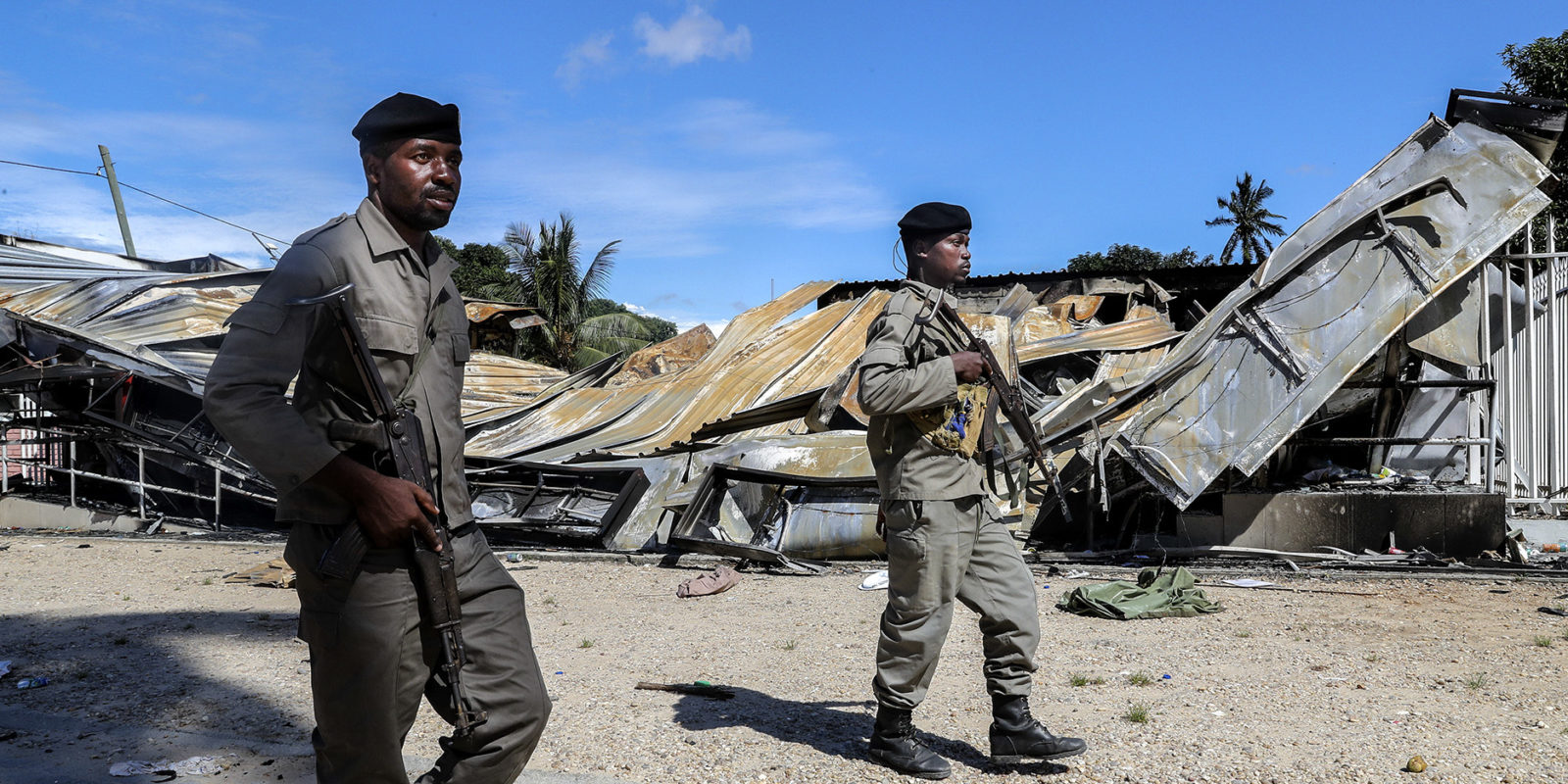 Mozambique army soldiers pass near a destroyed building during a patrol in the streets of Palma, Cabo Delgado, Mozambique, 09 April 2021. The violence unleashed more than three years ago in Cabo Delgado province escalated again when armed groups first attacked the town of Palma. (Photo: EPA-EFE/JOAO RELVAS)

Regional support is a good start, but much more than a SADC military deployment to Mozambique is needed.

Mozambique’s Cabo Delgado province is caught up in a security challenge that has captured global attention. The situation endangers tens of thousands of lives and has destabilised northern Mozambique. It also potentially threatens foreign direct investment in large-scale infrastructure, mining, exploration and other projects in the entire southern Africa region.

At the root of the conflict is a governance challenge that includes allegations of deeply entrenched corruption in the ruling party, the Liberation Front of Mozambique (FRELIMO). Poor governance and state absence have antagonised the local population and left a security vacuum.

The insurgency can stir up age-old social problems, ethnic rivalry and longstanding dissatisfaction among Mozambicans towards FRELIMO. While Southern African Development Community (SADC) members and other countries can help Mozambique, they cannot fix the problem.

Stabilising northern Mozambique will require a people- rather than security-centric strategy that tackles the security, humanitarian, political, economic, social and religious aspects of the insurgency. To achieve this, a centralised government body is needed to entrench an inter-agency approach and deliver a unified national response.

In the short term, the attacks need to be contained and the violent extremists driven out of the areas they occupy, such as the strategic port of Mocimboa da Praia. Substantial aid and support are urgently needed to respond to the humanitarian tragedy caused by the recent attacks during which 30,500 people were displaced. Overall, the insurgency has caused 2,838 deaths, of which 1,500 were civilians, and displaced more than 700,000 people.

Intelligence sharing among SADC members and other countries with a naval presence in the Mozambique Channel is essential. In time, technology such as drones and cellphone surveillance will be useful; but a human intelligence network is the immediate priority. It can provide a constant supply of information on local developments, new people entering villages and towns and possible external threats.

Without intelligence and a detailed understanding of the context, security and development cannot follow.

Mozambique requires a security capacity (police and military) stationed in Cabo Delgado that can quickly move by road, air and sea throughout the region and along the Tanzanian border. These security forces also need to patrol and secure the coastline.

This is where an envisioned SADC force could be critical, provided the troops are trained and prepared for non-conventional operations, follow appropriate doctrine and can communicate with and support the local population. At the same time, it is important to remember that SADC troops cannot replace the need for well-trained, equipped and accountable Mozambican police and soldiers.

Together with Mozambique’s police and military, SADC forces must act impartially and within the law if they are to stabilise the area and earn community trust. This is necessary not just for safety in Cabo Delgado but to avoid giving locals another reason to support the insurgents. Security force abuses have been a major driver of terrorist recruitment in East and West Africa and the Sahel, and must be avoided in Mozambique.

Along with boots on the ground, the most important element of SADC’s intervention should be regional cooperation in intelligence gathering and border management. The maritime smuggling routes that enable the illicit economy in the region also need to be closed down.

It is unclear to what extent the insurgency is funded by the extensive criminal networks that transport heroin in bulk from Afghanistan by sea down Africa’s East coast for onward smuggling into Europe. But 2018 research in northern Mozambique detailed links between the insurgents and a substantial illicit economy with ties to “political figures, the ruling party and their elite criminal associates.”

Lessons on how to break the links between violent extremism, organised crime and local conflicts have been well documented in West Africa’s Liptako-Gourma region. They should be taken on board in Mozambique.

An effective strategy must also deny the insurgents funding, arms and a rear base in neighbouring countries. Mozambique needs to deepen its police, military and intelligence cooperation with Tanzania and Kenya, including agreement on border management, hot-pursuit operations into Tanzania and maritime operations.

Police in Mozambique and Tanzania have signed an agreement on cooperation and intelligence sharing, although the joint operations centre at Mtwara in southern Tanzania is not fully operational.

In the medium term, stabilisation will require bringing to book those responsible for the attacks and abuses in Cabo Delgado. Sustainable security is much more likely when a criminal justice approach led by police and prosecutors, and informed by community members, is used instead of a military response focused on defeating terrorists.

Providing amnesty and undertaking a robust disarmament, demobilisation, rehabilitation and reintegration programme is also necessary. Security force action will rout some combatants and individuals forced to associate with the insurgents.

Institute for Security Studies research on Boko Haram in the Lake Chad Basin has shown that demobilisation is vital in dealing with violent extremism. Mozambique’s government and its partners must take a proactive and holistic approach. Formal screening and profiling are needed to ensure that innocents are reintegrated, and those with a criminal record are processed through the justice system.

To effectively counter radicalisation at community level in Cabo Delgado, the Mozambican government should pursue broad consultations with community, youth, women, civil society and religious institutions. Initiatives to promote inter-community and inter-faith dialogue among the population will be needed. This could culminate in civil society or non-governmental platforms or committees to help resolve the crisis.

In the longer term, the region’s recovery will depend on alternative livelihoods and poverty-alleviation measures to offset the local community’s reliance on the illicit economy, smuggling and the drug trade. That economy is deeply rooted in Mozambique’s large informal sector and will resist regulation.

The government must commit to the development and effective governance of the region. Without this, the people of Cabo Delgado are unlikely to provide intelligence, support the security forces and join development initiatives.

There have been some steps in this direction. Maputo is mobilising $764-million from multilateral partners to finance the Integrated Northern Development Agency (ADIN). ADIN has four main pillars — humanitarian assistance, economic development, community resilience and communication. The government needs to ensure that all critical stakeholders, including the religious and private sectors and traditional authorities, support it.

The education system must be reinvigorated to train and prepare locals for skills suited to new job opportunities. Authorities in Cabo Delgado would also need to invest in public works programmes to complement job creation in the formal and informal sectors and offer social activities such as sport to engage the youth.

An important poverty-alleviation measure would be a cash transfer (or social grants) programme that would directly benefit the community and demonstrate the government’s commitment to development. ADIN has already earmarked $25-million for this purpose for families in Cabo Delgado, Niassa and Nampula province. After that, it could be funded by ringfencing government income from the natural gas resources that should start flowing in 2024.

Finally, Mozambique must control and coordinate the foreign support now flowing through many aid agencies and countries eager to help. Its future income from gas allows some flexibility not available to other similarly afflicted countries. Support that is uncoordinated and comes with numerous conditionalities detracts rather than contributes to stabilisation efforts.

Maputo needs to own and drive the response to the insurgency and the recovery of local and investor confidence. No amount of private security advice, support or foreign troops and equipment can compensate for political leadership and the establishment of trust between people, the government and regional actors. DM