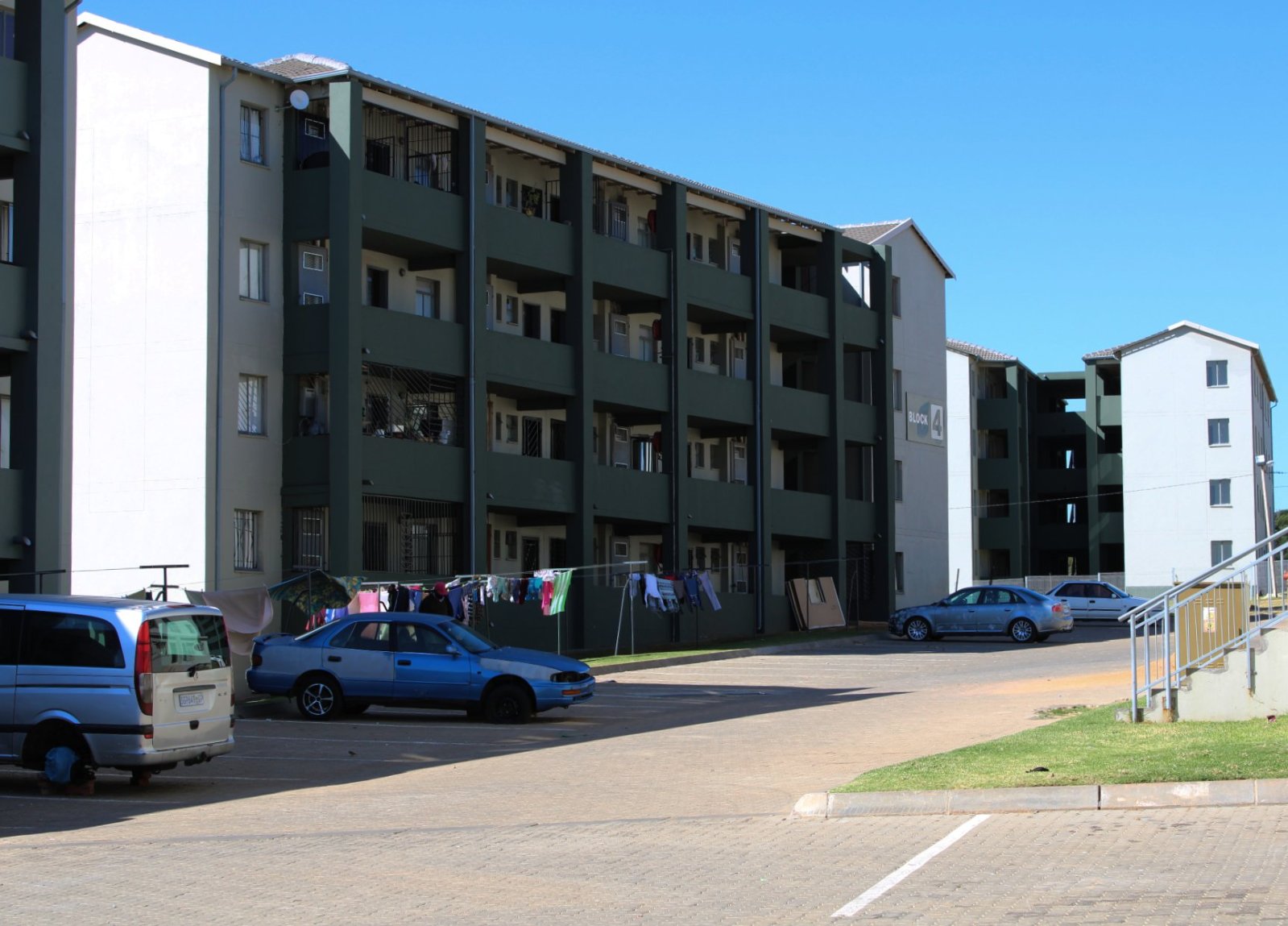 Residents living at the Fever Tree flats in South Hills, Johannesburg, say they are constantly reporting defects due to poor workmanship in their homes. Most people have only been living in the newly built units since 2019. (Photo Masego Mafata)

Cracked walls, leaking taps and general shoddy workmanship are some of the issues raised by residents in recently built council-owned flats in South Hills, Johannesburg.

Most of the 204 tenants began moving into social housing units at the Fever Tree complex as part of the City of Johannesburg’s Reconstruction and Development Programme (RDP) from 2019.

The City’s housing department contracted Calgro M3 to build the flats as part of its South Hills housing project. The complex aims to offer “affordable social housing for beneficiaries that meet the criteria” said Neo Goba, the housing department’s deputy director of communications.

But beneficiaries say that the units were riddled with defects when they moved in.

Nomsa Mabi has been on the waiting list since 1996. She is unemployed and relies on the welfare grant she gets for her daughter. Mabi said she had to use some of the grant money to fix up her flat. “Living here is hazardous and costly,” she said.

“For three years, Calgro has not been assisting us properly. When we report the defects, they do not fix the issues properly. We reported cracks in the walls and all they did was paint the walls. After three days, the cracks were visible again,” said Mabi.

In April 2021, residents were instructed to collect invoices from Joburg Water for backdated water bills since 2019. “I don’t understand how I’m suddenly supposed to pay for this when I already don’t work,” said Mabi.

The units have prepaid electricity meters and prepaid hot water meters. The residents we spoke to said they were under the impression that they did not have to pay for the use of cold tap water.

“It was not clearly communicated to the residents when they would start receiving bills from Joburg Water,” said Fever Tree resident Sarah Motaung. She said what angered people was that they have been reporting water leakages but were now being forced to foot the bill.

Gloria Magqaza, 74, said her unit flooded several times because of leaking pipes. “There are no air vents in the flats. We have to sleep with our windows open when it’s hot. It is difficult to keep the windows open in winter because of the cold,” said Mary Motaung, another elderly resident.

Ward 57 Councillor Faeeza Chame said, “We noted that the calibre of work was not of a professional standard. Windows were installed upside down, walls were cracking and taps were leaking. One block does not have a veranda to keep the rain away. So when it rains, the water goes straight onto the kitchen doors.”

A few residents also moved into units with no electricity, said Chame. Some of these residents are still waiting for their units to be electrified, she said.

Urvash Kissoon-Singh, commercial and finance director at Calgro M3 Developments, said that when the units were completed “the necessary quality checks were completed on all units and common areas. The development was signed off and accepted by CoJ [the City of Johannesburg]. The units remained vacant for a substantial period of time before they were occupied, resulting in damage and vandalism. Calgro has at its own cost repaired these units.”

When asked about the issues at Fever Tree, Goba said that the City was working with Calgro M3 to resolve the complaints. “Some of the challenges are both within and outside of the developer’s control. Issues that arise due to the lack of maintenance, including common areas, are being consistently maintained to ensure that there is no damage.”

According to Goba, capacity issues at the Moffat View Substation have delayed the electrification of some units. “We are unable to give timelines as the procurement of transformers has its own process,” he said. DM