Revealed: Third of British cabinet, including Boris Johnson, has been funded by Israel or pro-Israel lobby groups 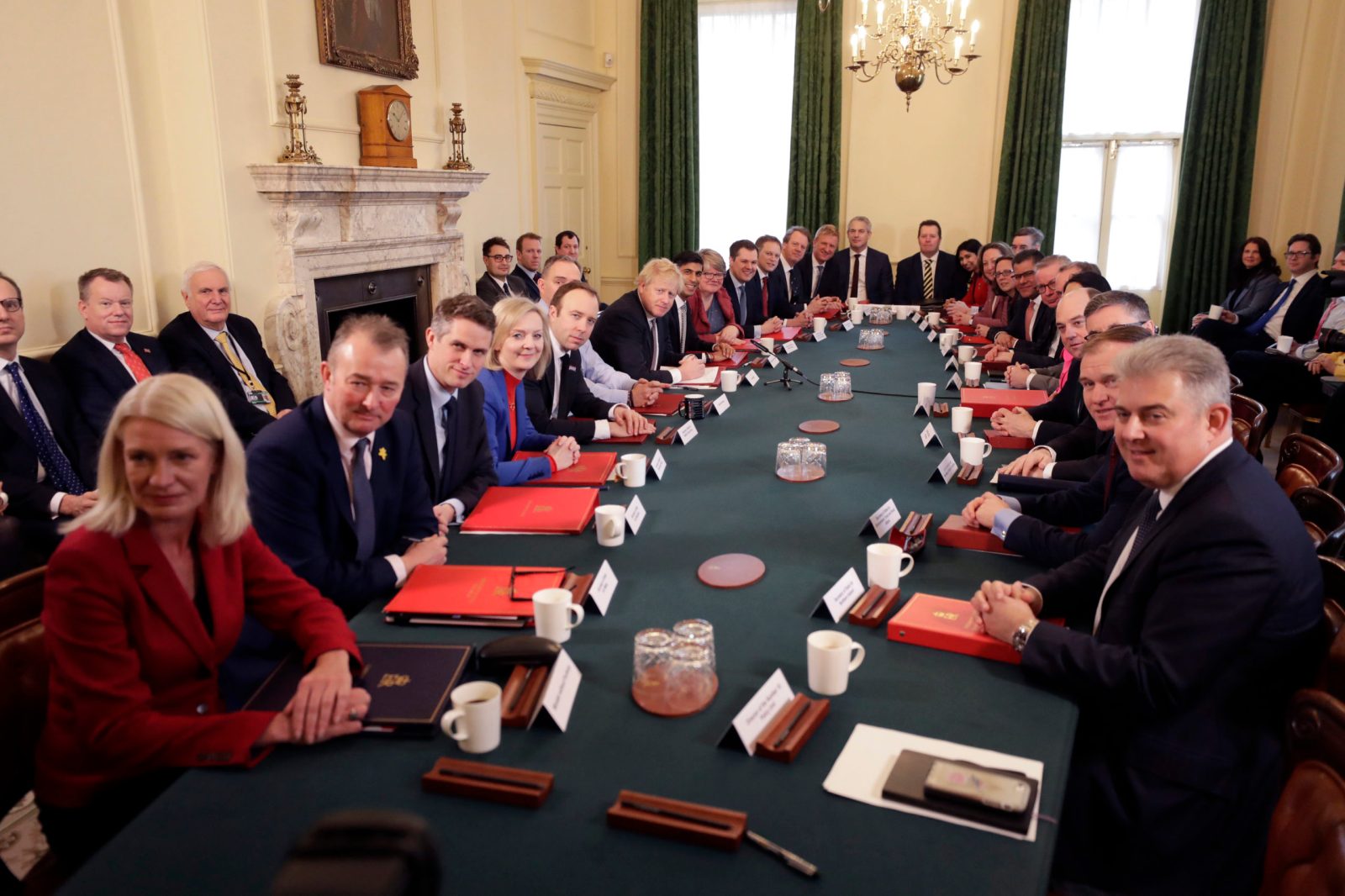 While the UK government has been backing Israel’s intense bombing campaign in Gaza, Declassified can reveal that a third of cabinet ministers and the foreign minister responsible for the Middle East, have been courted by the Israeli government or pro-Israel lobby groups.

More than a third of the British cabinet, including Prime Minister Boris Johnson, has made overseas trips funded by the Israeli government or affiliated lobby groups, it can be revealed.

Of the 23 cabinet ministers, eight have been funded to visit Israel or Washington DC while members of parliament, to the tune of at least £14,000.

Johnson went on a five-day trip to Israel in November 2004, three years after he first entered parliament. It was jointly funded by the Israeli government and Conservative Friends of Israel (CFI), a powerful Westminster lobby group which does not disclose its funders but has claimed 80% of Conservative MPs are members.

CFI says it “works to promote its twin aims of supporting Israel and promoting Conservatism in the UK”.

Johnson did not declare the trip in his parliamentary register of interests until four years later, in 2008, and did not disclose the cost of the trip, which may be a breach of parliamentary standards. Former chancellor George Osborne, who was also on the trip, registered it two weeks after returning.

The only public record of the visit is an article in the Spectator magazine Johnson authored soon after, in which he refers to his “affable minder from the Israeli foreign office”.

In 2012, CFI organised a “battle bus” to take Johnson on a tour of north London as part of his London mayoral election campaign.

As mayor, in 2015, Johnson visited Israel again, saying on the trip there is “something Churchillian about the country” due to its “feats of outrageous derring-do”. Two years later, now foreign secretary, Johnson referred to the “miracle of Israel” at a CFI event.

Five other ministers in the cabinet – Alok Sharma, Kwasi Kwarteng, Robert Jenrick, Oliver Dowden and Amanda Milling – took paid-for trips to Israel from 2011 to 2016. Kwarteng and Milling visited the year after they first entered parliament, while Dowden went before he became an MP.

A further two cabinet ministers, Michael Gove and Priti Patel, were funded to visit Washington DC to attend conferences put on by the American Israel Public Affairs Committee (AIPAC), the premier Israel lobby group in the US.

The UK government has been criticised for its backing of Israel’s bombing of schools, medical facilities, media organisations and residential towers in Gaza over the past 11 days.

At least 227 Palestinians in Gaza, including 121 civilians, have been killed since Israel’s bombardment began on 10 May, according to the health ministry in the territory. A ceasefire began early on Friday morning.

While the UK government repeatedly condemned the Palestinian group Hamas for firing rockets into Israel, it did not condemn Israel for launching hundreds of airstrikes on Gaza, an occupied territory.

At the height of the violence, Johnson said: “I am urging Israel and the Palestinians to step back from the brink and for both sides to show restraint. The UK is deeply concerned by the growing violence and civilian casualties and we want to see an urgent de-escalation of tensions.”

The UK government has so far refused to halt its arms exports to Israel and significant cooperation with the country’s military, which has deepened in recent years.

The home secretary, Priti Patel, was given £2,500 by the Henry Jackson Society (HJS) in 2013 to be a delegate at a “forum” organised by AIPAC.

The London-based HJS does not disclose its funders but has a staunch pro-Israel position and close links to Israel. At least two HJS staffers have moved directly from the group to working for the Israeli foreign ministry, while the group’s executive director, Alan Mendoza, was a founding director of the Friends of Israel Initiative.

Patel was on the HJS’s “political council” in 2013, leaving at some point in 2016, and also previously served as parliamentary officer of CFI. She was later forced to resign as a minister in David Cameron’s government after it emerged she held secret meetings with several Israeli politicians during a “family holiday” to Israel in August 2017.

The meetings, including one with prime minister Benjamin Netanyahu, were arranged by Lord Polak, the honorary president of CFI.

The head of the Cabinet Office, Michael Gove, is also closely associated with CFI and has spoken at its annual business lunch, describing Israel as a “light to the world” and “an inspiration”.

In 2017, Gove received over £3,000 from AIPAC to speak at its conference in Washington DC. The Henry Jackson Society also contributed to this trip. The previous year, the HJS had paid another £2,764 for Gove to fly to New York to pick up an award from pro-Israel newspaper, The Algemeiner Journal.

UK foreign secretary Dominic Raab is also closely associated with the HJS, having also sat on the group’s “political council” while minister for justice. It is not known what membership of this council involves or if Raab is still a member.

In 2011, the year after he entered parliament, Kwasi Kwarteng, now minister for business, was funded by the Israeli foreign ministry to visit Israel, in a trip costing £1,242.

The other visits by now serving cabinet ministers were funded by CFI, and were mostly described as being part of a “fact-finding political delegation to Israel and the West Bank”. They lasted up to six days and cost between £1,500 and £2,000.

It is not known if the MPs were given Israeli “handlers” during their visits like Johnson, but the Israeli government is known to be involved in programming such trips.

The current minister for the COP26 climate negotiations, Alok Sharma, made a CFI-sponsored trip to Israel in 2013, while Oliver Dowden, now culture minister, went the following year.

In 2016, Robert Jenrick, now minister for housing and local government, visited alongside Amanda Milling, the current minister without portfolio, who had entered parliament the previous year.

According to CFI: “The centrepoint of the [2016 CFI] visit was a high-profile meeting with Israel’s Prime Minister Benjamin Netanyahu for the announcement of the UK Government’s plans to stop local councils boycotting Israel.”

This announcement was made by Matt Hancock, then head of the Cabinet Office whose trip to Israel coincided with the CFI delegation. Hancock is now health secretary.

Robert Jenrick later called Israel “one of the great achievements in human history” at a CFI event. He told parliament last week that the UK government supports the idea that “anti-Zionism is anti-Semitism”, a controversial position that could be regarded as itself anti-Semitic as it conflates all Jewish people with the state of Israel.

Meanwhile, the current Attorney General, Michael Ellis, who is not a minister but attends cabinet, went on a CFI-funded trip to Israel in 2014. Current foreign minister James Cleverly visited the following year, just three months after first entering parliament.

On his 2015 trip, Cleverly said: “Israel is an amazing country, there’s no doubt about that.” Now minister for the Middle East, Cleverly on Wednesday provided strong support for the Israeli bombing campaign in Gaza.

He told parliament: “The UK unequivocally condemns the firing of rockets at Jerusalem and other locations within Israel,” adding: “We strongly condemn these acts of terrorism by Hamas and other terrorist groups who must permanently end their incitement and rocket fire against Israel. There is no justification for the targeting of civilians.”

Cleverly also told parliament that his government opposes an International Criminal Court enquiry into Israeli war crimes in the occupied territories and continues to reject calls to halt arms exports to Israel and recognise a Palestinian state.

Aside from trips to Israel paid for by lobby groups, other members of Johnson’s cabinet have been funded by pro-Israel individuals. Defence secretary Ben Wallace has received a donation to his constituency party from Lord Steinberg, the founder and president of the Northern Ireland Friends of Israel group until his death in 2009.

Meanwhile, Liz Truss, minister for international trade, in 2015 received a donation from David Meller, a British businessman who was a director of CFI from 2012 to 2014. Meller has also donated to Michael Gove. DM